“While the House of Representatives has passed several cannabis bills, the Senate has always been the big hurdle for pot legalization,” says our pot stock authority Ray Blanco.

“Finally, after lots of talk, cannabis is getting traction in the Senate… 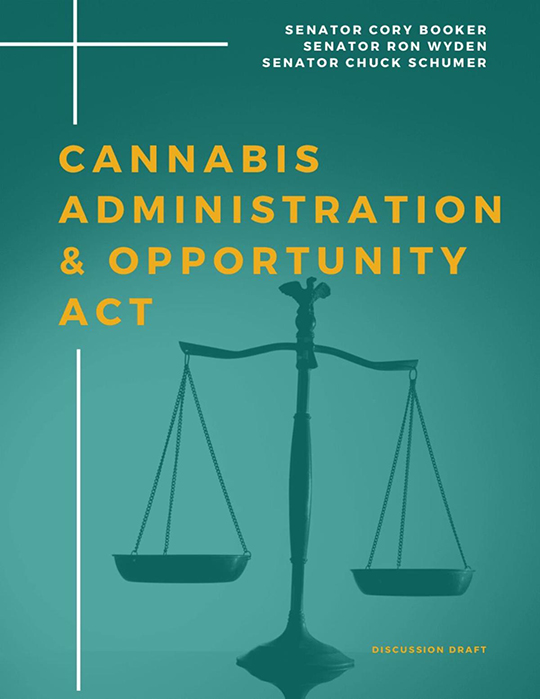 Ray notes: “Sen. Schumer has been pushing for cannabis reform since he became majority leader after the last election. He’s said that he prefers not to work on the House-passed SAFE Banking Act, since he wants a more comprehensive bill.

“Now with help from Sens. Wyden and Booker, we get a glimmer of what cannabis reform would look like in the United States.

“The bill is a ‘states first’ piece of legislation,” says Ray. “Individual state laws and regulations still determine if cannabis is legal or not.

“As of now, legal recreational pot is legal in 18 states, D.C. and several U.S. territories. And medical [cannabis] is legal in 36 states,” he continues. “Public opinion strongly supports legalization.”

Now, here’s a peek inside the Cannabis Administration & Opportunity Act…

Social Justice: “According to the ACLU, over 7 million people were arrested for cannabis possession between 2001 and 2010, with Black people almost four times as likely to be arrested despite roughly similar rates of use compared to whites,” says Ray.

“The new bill aims at helping heal this disparity by having the federal government expunge all prior convictions and arrests for non-violent offenders. Also, people currently under sentence will be able to have their sentences reviewed.

“The bill also aims to help people harmed by marijuana prohibition with grants, with help including job training and re-entry into normal society,” Ray says. In addition, small cannabis businesses would be granted access to Small Business Administration loans.

Regulation and Taxation: “Control over the cannabis industry would be transferred from the Drug Enforcement Administration to the Bureau of Alcohol, Tobacco, Firearms and Explosives (ATF),” Ray says. (Presumably, the agency might add another letter in its acronym should this measure pass.)

“Also, authority would transfer to the Food and Drug Administration to protect consumers via a Cannabis Products Regulatory Advisory Committee.” Add to that: “Medical research would no longer be stifled,” says a summary of the bill at Sen. Booker’s website.

“Next, we might see a federal excise tax as we see with alcohol and cigarettes, turning the marijuana from a law enforcement-spending black hole into a revenue generator,” Ray says.

Last, according to the bill’s summary: “State-compliant businesses will finally be treated like other businesses and allowed access to essential financial services, like bank accounts and loans.”

“That’s a huge benefit for marijuana businesses,” says Ray, “which have to deal with the overhead of working outside the traditional banking system.”

He concludes: “With an early draft bill in hand, legalization efforts in the Senate can hopefully move forward soon.

“And while this draft isn’t the last word,” Ray concludes, “it’s a bullish step in the right direction for cannabis stocks.”

[Editor’s note: A highly anticipated announcement might set off a profit run of 10X or more… No, it’s not a cannabis play; rather, a $10 biotech stock that’s working on an unorthodox way to treat Alzheimer’s disease. And Ray Blanco and his research team expect the company to make a groundbreaking announcement THIS Saturday.

We’re talking about the type of “swing for the fences” opportunity that might forge fortunes for bold investors. Example? Just yesterday, Ray’s subscribers pocketed 55% gains on one stock he recommended in May.

So take a moment today to review Ray’s message… before time runs out.]

“It appears we’re in the home stretch for an actual infrastructure bill being passed,” says our retirement specialist Zach Scheidt.

“The proposed bill will use a more traditional definition of the term ‘infrastructure’ — setting aside $559 billion for projects like roads and bridges (transportation), electric transmission lines and power stations (power grids) and internet availability (broadband).

“Other initiatives that fall under the ‘human infrastructure’ category (like education, entitlements and wealth equality projects) will have to be figured out separately,” Zach says.

Zach’s takeaway: “We can start building positions in some of the best stocks that will benefit from infrastructure spending.”

For example, “When news of the bill first hit the wires, Caterpillar Inc. (CAT) shares immediately started to trade higher,” he says. “I think the company is a great long-term play, and I like CAT’s 2% dividend yield. But I think you can do better with a different stock.

“Shares of Terex Corp. (TEX) also moved higher on the news,” says Zach. Like Caterpillar, “TEX is known for its heavy construction machinery.” 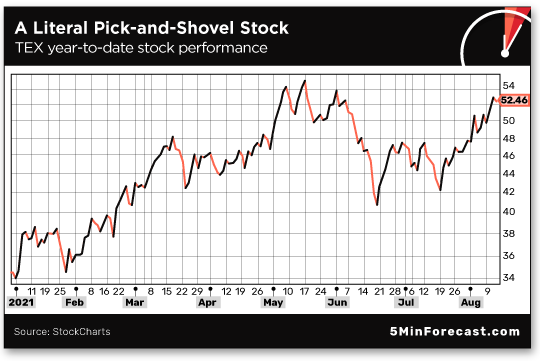 “Shares should trade steadily higher as investors start to shift their portfolios to take advantage of this new wave of [infrastructure] spending.

“Since Terex isn’t a household name, it doesn’t jump around quite as much as CAT,” Zach continues. “I like that the company flies a bit under the radar for most investors.

“And if you buy shares of TEX today, you’ll own a piece of a very profitable company,” he says. Plus, “you’ll be getting a great deal on your purchase.

“Wall Street analysts are currently projecting TEX to earn $3.85 per share next year.” With shares trading around $52 today, “you will pay just over 13 times next year’s expected earnings. “That’s a steep discount to what you’ll have to pay to buy shares of CAT,” Zach notes.

Dividend? “TEX currently pays a 1% dividend yield,” he says. “But with surging profits in the year ahead, I expect TEX to increase its payment to investors.

“Of course, nothing is certain when it comes to politics,” Zach concludes. “But the progress made gives me confidence that Washington will pass an infrastructure bill that directs billions of spending toward heavy construction.

“And that gives us the green light to start building investments that will surge as infrastructure spending picks up.” 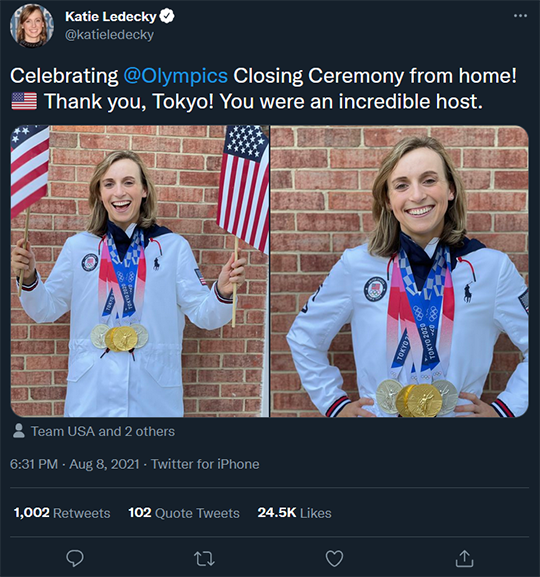 “All Olympic medalists win money along with their hardware — $37,500 for gold, $22,500 for silver and $15,000 for bronze – [but] the Internal Revenue Service exempts athletes making less than $1 million in income from paying taxes on their winnings,” Fox Business reports.

That exemption was just recently secured in 2016 per HR 5946, aka the “United States Appreciation for Olympians and Paralympians Act.”

So lucrative sponsorships mean no IRS “appreciation” for Ledecky; instead, her winnings will be taxed at 37%. (Biden’s “wealth tax” might change that for future star Olympians.)

Not to mention she swam for her metals in Japan. “Many other countries don’t tax income earned while in a foreign country,” says tax attorney Conrad Teitell of Cummings & Lockwood. “Income earned by an American citizen, even if it’s in Timbuktu, is income on your U.S. tax return.” Yep…

But perhaps Ledecky had the foresight to hire a wily tax attorney herself? As Obama did when he won his Nobel Prize — totaling $1.4 million — and cannily donated his winnings to charity in a way that “bypassed his income entirely,” Forbes reports. “That was good tax planning.”

Seeing as Ms. Ledecky grew up in D.C.’s environs… she’ll be fine.

Have a great day! We’ll be back tomorrow…

Now one tech researcher believes another company is set to make an even BIGGER announcement as soon as this Saturday.

For investors, it could mean the chance to rack up 10X gains or more over the long term. Watch this short briefing NOW… or risk missing out on this huge profit opportunity forever.