Time flies: It’s been nearly 10 years since Solyndra — the poster child for “green” boondoggles of the Obama era — went belly-up.

Back in those days, even conventional solar technology needed subsidies, tax credits and so on to be economical.

No more: “Solar is becoming a commercially viable product that can stand on its own, without government subsidies,” says our Ray Blanco on the science-and-wealth beat.

“Over the past decades, photovoltaic solar prices have dropped by more than 75% and give every indication of continuing the trend toward becoming cheaper still.”

In the same way that Moore’s law operates in the computer-science field — ever-shrinking chips produced at ever-falling cost — Ray says a phenomenon called “Swanson’s law” is at work in solar.

“Richard Swanson, the founder of photovoltaic company SunPower, noticed that the price of a watt of solar power drops 20% every time industrial capacity doubles. He is credited for noticing this trend, much like Intel founder Gordon Moore gets the credit in noticing a regular trend in semiconductor chips.

“The Swanson effect has turned solar energy from a boutique and expensive energy source into a mainstream competitor to conventional energy. In the U.S., it has grown from providing just 0.34 gigawatts in 2008 to an estimated 97.2 gigawatts today.”

Not coincidentally, the average cost of a solar panel has dropped 70% since 2014.

Just one problem: “Very soon, in large part because of renewable energy, we will be producing more energy than we can use,” says Ray.

Let’s back up a bit: “You can run a coal or gas plant all day, every day of the year. But if the sun isn’t shining, you’ll get no power from solar. Moreover, when the sun is shining its strongest, you might have an overproduction of electricity.

“As an intermittent power source, solar has to be supplemented by traditional sources to compensate for when there is slack in output. That’s not only dirty, but the duplication in generation power is expensive.

“For solar power to truly be competitive, a way to store energy is needed for those times when the sun isn’t shining, and to store surplus power when it is.

“In short, a boom in solar energy use means there is also a boom in energy-storage technology,” Ray sums up.

That’s where the real growth in green energy will come from during the 2020s: “Energy-storage installations are expected to grow exponentially,” Ray explains, “with a 122-fold growth in capacity by 2040 that will require hundreds of billions in new investment.

“Demand for storage systems will be driven by a change in the electricity-generation mix, with renewables making up almost 40% of electricity generated by 2040.”

Readers of Ray’s entry-level newsletter Technology Profits Confidential are already up to speed on his favorite ways to play the trend. But it’s early days, and there’s much more of the story to be told. Stay tuned for the rest of the summer…

The stock market is taking a tumble this morning — supposedly because the mighty American consumer snapped the wallet shut last month.

The Commerce Department is out with its retail sales number. It registered a 1.1% drop from June to July — rather more than the 0.2% drop the “expert consensus” was looking for.

Even if you factor out vehicle sales (because they’re volatile month to month) and gasoline sales (because fluctuating prices skew the sales totals)… you end up with a worse-than-expected drop of 0.7%.

Then again, the drop might be a function of renewed “taper talk” by the Federal Reserve.

This morning’s Wall Street Journal features a story by Nick Timiraos, the reporter who’s the Fed’s favorite conduit for “authorized leaks.” In his telling, the Fed is looking to “taper” its bond purchases — currently $120 billion a month — with an eye toward winding them down a year from now.

We’ve described the Fed’s conundrum before: The Fed’s EZ-money response to the pandemic and lockdowns has swelled its balance sheet past $8.2 trillion. That can’t go on indefinitely without threatening foreigners’ confidence in the U.S. dollar. The steep upward line on this chart has to level off, sooner or later, the way it did in late 2014… 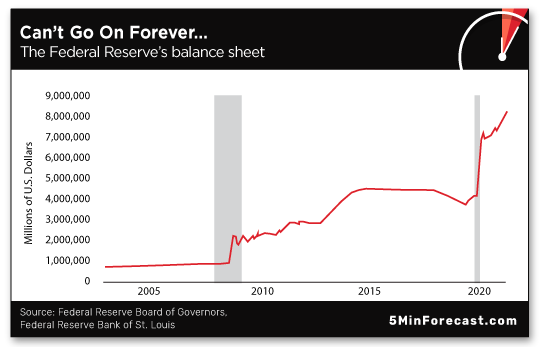 But it’s that same EZ money that’s propelled the stock market higher this whole time; as of yesterday, the S&P 500 doubled from the corona-panic lows of March 23, 2020.

And so the Fed is trying to let Wall Street down gently with efforts like the story planted in today’s Journal. A follow-up effort will surely come this afternoon when the Fed releases the minutes from its July meeting.

And still another effort will come next week during the annual symposium of central bankers at Jackson Hole, Wyoming; Fed chair Jerome Powell delivers a big speech on Friday the 27th.

If retail is slowing, industry is accelerating: Or so we’d deduce from the Fed’s industrial production numbers out this morning.

Industrial production rose more than expected in July — 0.9%. And it’s manufacturing doing the heavy lifting here; factory output grew 1.4%. Mining and energy production also grew at a healthy clip of 1.2%. Utility output, however, is a drag on the headline number, falling 2.1%.

All told, 76.1% of America’s industrial capacity was in use during July. That’s the highest number since the lockdowns hit in early 2020… 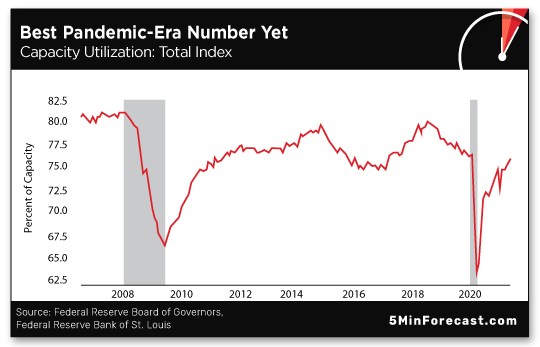 … although it still looks punk by the standards of the last 15 years.

“Crypto looks like it may be heading for a renaissance,” ventures our cryptocurrency enthusiast James Altucher.

“That upgrade, known as EIP-1599, essentially destroys a small amount of Ethereum with every transaction processed on the network. In effect, this will gradually reduce the total number of Ethereum tokens (known as Ether) over time, and have a positive impact for the remaining Ether tokens.”

James says he’s had reservations about Ethereum in recent years, but this latest development is making him reconsider: “With EIP-1599, Ethereum looks to challenge Bitcoin’s dominance by not just limiting the total currency in circulation, but by actively reducing the total number over time.

“At least on a theoretical basis, this means that Ethereum investors can sleep soundly knowing that they can park value in the digital asset and rest assured that their investment will grow over the long term.”

The culture of impunity: Treasury Secretary Janet Yellen has released a very incomplete version of the daily appointment calendar from her first three months in the post.

The good folks at Wall Street on Parade count 73 redactions pertaining to her phone calls and meetings.

Write Pam Martens and Russ Martens, “There must be something particularly embarrassing about the people involved in at least some of these redacted meetings and phone calls because there are unredacted names on her appointment calendar that certainly raise eyebrows.”

Doesn’t exactly instill confidence, coming on the heels of the $7.2 million in speaking fees Yellen collected in 2019 and 2020, most of it from Wall Street firms. (Her 2018 fees, the first year after her departure as Fed chair, remain a black box.)

The Martenses are going out on a limb here; as we recounted at the start of the year, any demands for transparency on Yellen’s part bring forth howls of misogyny from the mainstream.

“Can’t close a house deal — with money?” reads the subject line of a reader’s email.

“As I am embarking on my sixth-lifetime house-closing process I am struck at how screwed up the process is. (Note: I don’t own six houses. I just have moved around a lot in the U.S. after I get fed up with stupid, ineffective employers.)

“My wife and I are tentatively scheduled to close in the second week of September, but this is what I have either read or been told during this time when it comes to the closing day and paying the closing costs:

1. Apparently it is illegal in the state of Kansas to close a property deal with a check — personal or cashier’s.

2. I signed a wire transfer fraud paper today. It said that electronic wire transfers are not recommended because they are open to hacking.

3. The local bank will only by federal banking regulations allow a person to withdraw like $3,000 cash?

4. I asked if I could pay using Bitcoin or Ethereum. This was met with the sound of financial crickets……….

“So the sum of the above has led me to make the conclusion it is impossible to do a property deal on a house that is overinflated, with dollars that are worth $0.15 compared with 50 years ago.

“Why should a sane person going through this process? Really? WHY!?

“If I weren’t married I would just become a Protestant monk……….screw this stupid country……”

After our commemoration last week of Dylan Ratigan’s “extraction” rant, a reader takes us on an unexpected tangent…

“I do remember watching Dylan Ratigan daily as the moderator on CNBC’s Fast Money during the mortgage meltdown (a time when one of the regulars would say there were only two positions to be in: cash or fetal). I always wondered what happened to him, but I guess I am going to have to watch his rant some other time. Clicking on your screenshot takes me to YouTube.

“I am not watching YouTube right now. Perhaps you can guess why. Probably Mr. Ratigan could, too.

“Going cold turkey does mean going without my favorite entertaining crypto channels, some of which do multiple live streams a day. But then, whether I watch them or not, my cryptocurrencies go up and down regardless.”

The 5: That’s hard-core. More than your editor can do, and I deleted my (seldom-used) Facebook account somewhere around 2014…