This Issue Is So “Meta”

“The metaverse is an idea that we’re working on right now,” says our science and tech authority Ray Blanco about his team’s recent preoccupation.

“So what is the metaverse?” Ray continues. “The term comes from the science fiction author Neal Stephenson who wrote a book called Snow Crash.”

Essentially? “It’s augmented reality (AR), virtual reality (VR) and experiencing virtual worlds.” We already have this technology — “to a certain degree,” he says. “But [this technology] is going to go to a much richer and deeper level of realism.”

“Everybody’s working on it,” says Ray.

“So there’s the hardware side and then there’s the software side, and there are different ways to play it…

“Apple is supposed to be working on Apple Glasses,” facilitating the “augmented experience,” says Ray. “Of course, Apple isn’t the first company to try to make AR glasses.”

Remember Google Glass? Widely available for sale in 2014? But they never really caught on… 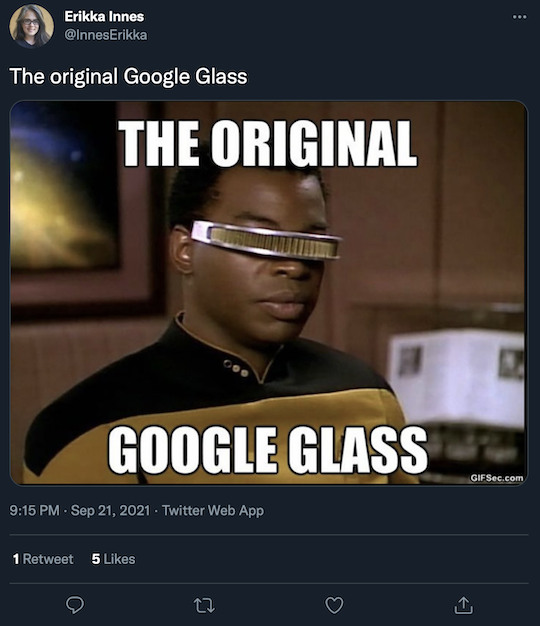 “Other attempts at augmented reality (AR) glasses have been a lot like the portable digital music players of the late 1990s or the smartphones of the early 2000s — they weren’t meant for mass-market users.”

Ray says: “The key to success for smartglasses will be to make comfortable glasses, and a seamless user experience.

“Apple’s Glasses would allow users to see digital images projected directly on a pair of stylish specs. Instead of having to peer over at your GPS screen while driving, Apple Glasses would provide driving directions through AR right in your field of vision.

“Rather than pull your phone out of your pocket, Apple Glasses would let you interact with your tech seamlessly.

“This new device could make your phone obsolete — or at least completely change how you interact with it,” Ray says.

Consider this: “[Apple] had been amassing a deep bench of patents around AR glasses,” he says, “and they’ve been laying the foundation over the past few years with the hardware and software that currently runs on iPhones.”

And even though Apple smartglasses didn’t make it into Apple’s yearly dog and pony show earlier this month, Ray believes: “They are coming.” In fact, Bloomberg’s Mark Gurman believes Apple will host two fall events this year, with a second in October.

“Obviously, the hard details are still scant,” Ray says, “but I think that we could see information from Apple as soon as this year.”

As always, we’ll continue to follow Ray and his team as they explore the metaverse (and position investors to profit).

According to the People’s Bank of China: “Crypto-related transactions will be considered illicit financial activity, including services provided by off-shore exchanges,” Bloomberg reports.

“In a separate statement, China’s economic planning agency said it’s an urgent task to root out crypto mining and the crackdown is important to meet carbon goals.”

In other words, Crypto miners might find themselves cooling their heels alongside tech entrepreneur Jack Ma. Oy…

So what mustn’t be left out of the crypto crackdown discussion: “Xi regards all Chinese companies” — we’ll insert cryptocurrency — “as instruments of a one-party state,” said hedge fund manager George Soros in an Op-Ed at the Financial Times, adding: “[Xi] is putting in place an updated version of Mao Zedong’s party.”

In light of China’s crypto ban, we start our market notes today looking at flagship crypt Bitcoin — paring its losses to 6% at $42,200.

And for more on the war on crypto, this time stateside…

In August, The 5 called SEC chair Gary Gensler a “Steamroller” after he trolled crypto… You know the song and dance — about how there’s no “use case” for crypto beyond money-laundering, tax evasion, etc.

Gensler has gone on to lobby lawmakers to grant the SEC more authority to regulate cryptocurrency. (Presumably to protect crypto enthusiasts… Plus, who doesn’t like a little more power?)

Now Gensler is taking aim at stablecoins, saying they “are acting almost like poker chips at the casino right now,” in an interview at The Washington Post Live podcast.

To continue the metaphor, he says: “We’ve got a lot of casinos here in the Wild West and the poker chip is these stablecoins … at the casino gaming tables.” A very garbled metaphor, indeed…

About stablecoins: They’re pegged to traditional fiat currencies, including the U.S. dollar. “Among the biggest stablecoins, tether was valued at around $68 billion,” says an article at Business Insider.

The article continues: “The SEC is putting together a report about stablecoins under the guidance of Treasury Secretary Janet Yellen, Gensler said, adding that working with Congress ‘would help’ in the regulation of stablecoins.”

For our purposes today, we want to point out the “Steamroller” keeps, well, steamrolling. And it’s one of the biggest political head fakes in recent memory… 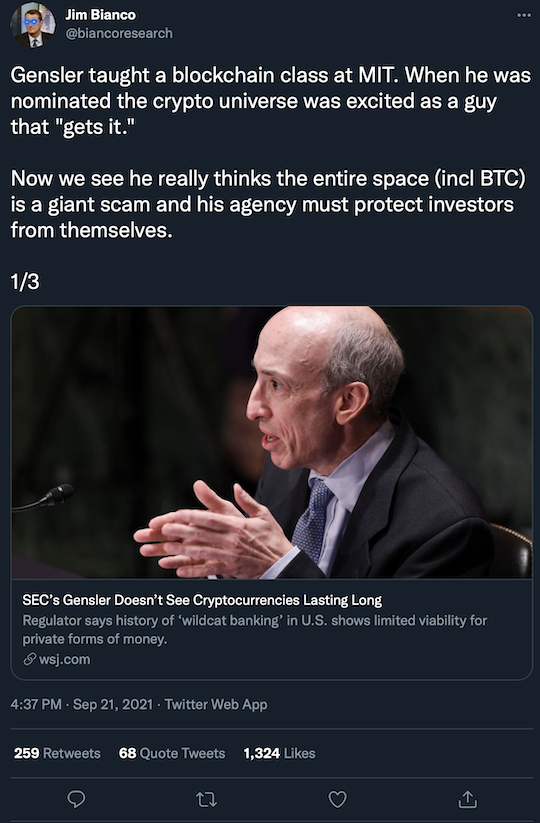 We’ll give Gensler the last word on the subject: “I think it’s worthwhile to have an investor-protection regime placed around this.” But regime is such a pejorative term, no?

Guess China’s not the only regime cracking down on crypto…

[UPDATE] In the most recent Saturday issue of The 5, we outlined the Senate’s budget bill, including a proposal that takes aim at ETFs.

At the time, we didn’t get into the complexities of the tax proposal, choosing instead to focus on the proposal’s pro (not a typo) and cons. But today, our retirement specialist Zach Scheidt addresses the ins and outs of the proposal and what it means for everyday investors.

“The new proposal would close the so-called ‘in-kind loophole’ that many ETFs use to avoid triggering a tax bill for investors,” Zach says.

Meaning? “For years, ETF managers have been allowed to move capital out of one position and into another similar position without triggering a tax liability,” he explains. “This allows the ETF to continually rebalance its investments so that its performance matches” whichever index or sector it’s tracking.

“Taxes are then paid by individual investors whenever they sell the ETF shares for a gain.

“This totally defeats the purpose of buying an ETF and investing in the market for a long period of time, the way most middle-class Americans invest in these financial tools.

“Democrats have gone on record saying that this will only hurt the rich because they don’t believe most middle-class investors actually hold ETFs for long periods of time.

“Middle-class investors are exactly the kind of investors who will be hurt by this!”

While wealthy investors can afford a stable of wealth managers to avoid tax liabilities — slipping through every available loophole — “mom and pop ETF investors will wind up footing the bill for this new tax,” Zach concludes.

Here’s hoping for the tax proposal… to stay a “proposal.”

“States Have $95 Billion to Restore Their Unemployment Trust Funds — Why Aren’t They Using It?” says a Tax Foundation headline.

Since the beginning of the pandemic, states have doled out $175 billion in unemployment benefits. “State trust funds now have a negative aggregate balance of -$11 billion and are $115 billion shy of minimum adequate solvency levels,” The Tax Foundation notes.

“By federal standards, 34 state accounts are currently insolvent, with $114.6 billion needed to bring them all up to what the federal government regards as minimum adequate levels.” 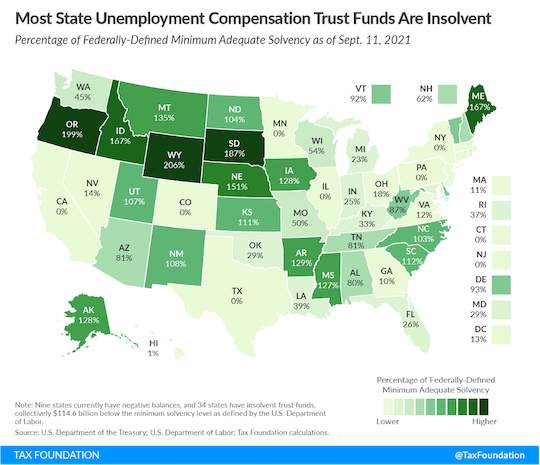 And 42 states plus D.C. are eligible to use $95 billion of American Rescue Plan money to fill unemployment insurance coffers “which would go a long way to restoring their fiscal health.”

Exactly why states aren’t making this a priority is baffling, taking into account states with underfunded unemployment funds incur penalties as well as accrue interest on some federal loans starting Sept. 6, 2021. Even worse — and perhaps more baffling — some states are addressing the UI fund crisis by raising taxes on small-business owners.

Put bluntly: States should use the damn money…

According to mystery shoppers, wait times at drive-thrus have increased… while order accuracy has dropped.

“The average total time spent in the drive-thru lane increased by more than 25 seconds from a year ago to 382 seconds,” says CNBC. “Compared with pre-pandemic times, that’s nearly a minute longer.

“Order accuracy dropped to 85% this year from 87% in 2020” — this according to secret shopper group SeeLevel HX’s annual report.

So how did your favorite fast-food joints stack up? For accuracy only…

(Come to think of it, this story fits the bill for our supply-chain snag of the day. Kinda.)

Welp, it’s Friday, folks, and we assume some of you might be waiting in drive-thru lines this evening. Be prepared to wait 25 seconds longer… and don’t forget to check the bag to make sure you got your fries.

Have a good weekend, and take care!