The Social Security Reform Act of 2023

“We have this rare moment to accomplish seismic achievements, and this is the time to do it,” says Rep. Richard Neal (D-Massachusetts), the chair of the House Ways and Means Committee.

Yesterday, Neal was among a handful of Democrats who trotted out the newest model of their Social Security “reform” legislation.

It’s not too different from the model they introduced in 2019. However this time, “it features some changes aimed at attracting more support from Republicans,” per a CNBC article.

And it just might fly this time… although for reasons we’ll get to later, we don’t expect passage until 2023.

Like the 2019 proposal, the current version has two striking features…

Of course, leaving the retirement age alone and raising the COLA has to be paid for somehow. After all, the Social Security trust fund is forecast to be depleted by 2033 — at which point only current payroll taxes would fund the program and benefits would have to be instantly slashed by 22%.

But unlike in the 2019 proposal, an increase in the payroll tax rate is off the table.

That part of the plan has been dropped, presumably with an eye toward attracting Republican support.

A different tax increase, however, is still on the table — one that forever alters the original bargain of the Social Security program.

Thus, Social Security would be transformed from a “social insurance” program into straight-up income redistribution.

See, those higher taxes you’d pay during your working years would not translate to higher benefits in retirement — a decisive and permanent break from Social Security’s original design in the 1930s.

William Reichenstein, business professor emeritus at Baylor, ran the numbers on the 2019 proposal: Someone with a $500,000 income would pay $6,200 more in taxes every year. But in retirement that translates to only an additional $156 in lifetime benefits.

We can’t imagine the numbers would be much different now.

For the moment, it’s all hypothetical. We don’t expect this proposal to go anywhere until 2023.

Major Social Security reforms tend to take place under “divided government” — especially a president of one party and a House speaker of the other.

Under President Reagan and House Speaker Tip O’Neill in 1983, they raised the retirement age from 65 and made Social Security benefits subject to income tax.

Under President Obama and House Speaker John Boehner in 2015, they did away with “file and suspend” — a strategy many couples used to maximize their benefits.

If Republicans take control of the House in the 2022 midterms, that sets the stage for action in 2023 — which happens to be the year before a presidential election, just like 1983 and 2015.

It’s easy to envision a compromise — the GOP swallowing the tax increase on higher earners in exchange for raising the retirement age.

Just spitballing here, but if the politicos follow the playbook of the 1983 reforms… full retirement age would jump to 68 for those born between 1983–1994, gradually rising to 69 for those born in 2000 and later.

But that’s 2023. For now, the current Congress and the White House still have to hash through their infrastructure and health care-education-climate spendapaloozas.

As we mentioned last week, an increase in tax rates to pay for all those programs is looking more and more like a nonstarter. So Dems are casting their covetous eyes at other revenue raisers — and it increasingly looks as if they’re going to settle on a weird variant of a wealth tax.

See, the ultra-wealthy can easily finance their lifestyles while sidestepping income tax by borrowing against the wealth they’ve built in their companies.

We’ve chronicled this phenomenon for more than a decade — the founders of Google, for instance, booking a token $1 a year in W-2 income. But the mainstream tumbled to it only this year with an expose published by ProPublica.

And so Democrats are becoming fixated on the idea of — as The Wall Street Journal describes it — “annual income taxes on about 700 billionaires’ unsold publicly traded assets such as stocks.”

In other words, a capital gains tax on assets they haven’t sold yet.

To be sure, it’s nowhere near a done deal. Several Dems dismiss the proposal as a stunt — “a public relations idea,” scoffs Rep. Dan Kildee (D-Michigan) — and it might not even pass constitutional muster in the courts.

But here’s what bugs us: If the idea does become law, it sets a precedent for the rest of us who aren’t billionaires.

We think back to passage of the 16th Amendment, which cleared the way for enacting an income tax in 1913.

“It may have affected something like 2% of Americans,” University of Iowa law professor Carolyn Jones recalled to the public-radio program Marketplace. “It was clearly a soak-the-rich kind of tax.” And the rate was only 7%.

But the rest was history. With American entry into World War I, the top rate soared to 77% only five years later. And with American entry into World War II in the 1940s, the tax was extended to the multitudes. “That’s when the tax is transformed from a class tax on the rich into a mass tax on the middle class,” explained Joe Thorndike of the Tax History Project.

Imagine a couple decades down the road, having to draw down your 401(k) to pay for the paper gains in your account, year after year.

Sounds insane, right? But so did the idea of middle-class folk paying a 22% marginal rate in 1913, and that’s where we are now.

Once more it’s the Nasdaq outperforming the other major U.S. stock indexes today… but it still isn’t quite back in record territory.

At last check, the Nasdaq composite is up nearly two-thirds of a percent to 15,331 — less than 50 points from its record close in early September.

Curiously, Pfizer is giving up all the gains it picked up yesterday when an FDA panel recommended authorizing the firm’s COVID vaccine for kids ages 5–11. Maybe because one of the panel members, Harvard’s Eric Rubin, umm, said the quiet part out loud? 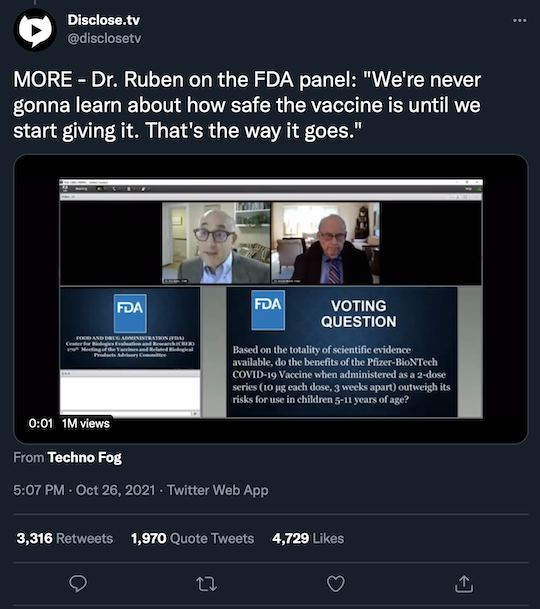 Elsewhere, the big economic number of the day is durable goods orders, which shrank 0.4% in September — less than expected. If you throw out the volatile categories of aircraft and military hardware, the number looks way better — up 0.8%, double what was expected.

Meanwhile, America’s trade balance looks worse than ever — blowing out to a record $96.3 billion in September. Exports were down, imports up. (So much for Donald Trump’s promise that a trade war — still being waged by his successor — would shrink the trade deficit.)

“I guess you got tired of hiding your right-wing Republican bias,” a reader writes.

“You couldn’t have made it any clearer how you agreed with Facebook’s lack of good judgement on their due diligence by allowing the Stop the Steal rhetoric from stoking the Jan. 6 insurrection.

“Putting the brakes on that kind of speech shouldn’t have to be a Biden agenda item as you stated. It should be an American agenda item, unless of course overturning a valid, safe election was on your wish [list] as well. Anyone smarter than a fifth grader can see right through your ultimate goal.

“The other point that should be made is that if this newsletter is all about success in the stock markets, why haven’t you mentioned how well it is doing under a Democratic president (including Obama).

“I, for one, never thought the market depended on any one party, but you obviously always thought the Republicans could push the market up better than the Dems and have been rooting for them all along as if it made a difference. I guess objective journalism was never your strong point or you would be remarking about this in your newsletter.

“Since I am smarter than a fifth grader and know bias when I see it, I will continue to read your newsletter for its other fine attributes of letting us know what’s going on in the financial world beyond our local sources. No need to print any of this, just wanted you to know that we are not all as gullible as you might think.”

The 5: So we take it you’re fairly new to these parts?

We’ve been publishing this e-letter through four presidencies now. We defy you to go through our voluminous archivesto find anything where we asserted “the Republicans could push the market up better than the Dems.”

We don’t even particularly care about “the market.” We care about specific companies and sectors and asset classes that can outperform “the market” regardless of who occupies the Oval Office. We seek out investment ideas that can better the lives of our readers no matter which set of clowns is running the show at any given moment.

Meanwhile, we said nothing yesterday about Facebook’s conduct before, during or after the 2020 election. You read into it whatever you wanted to read into it to fuel your sense of perpetual outrage.

Lot of that going around these days. Republicans do the same thing; now and then they tell us we’re “not doing enough” for their side, as if we ever committed to doing anything for any side. We have positions and we have principles, but we keep them separate from personalities and parties, about which we couldn’t care less.

But yes, social media censorship bothers us for reasons we revisited in depth over the summer. It bothers us no matter who the target is. Only yesterday YouTube deleted Novara Media, a leading left-wing voice in the United Kingdom. It was quickly restored, but neither the deletion nor the restoration came with any explanation.

So no, we’re not down with politicians and oligarchs colluding to decide who may and may not speak. We denounce such creepy collaboration between the public and private sectors.

In fact, isn’t there a word for such a phenomenon? Starts with an “f” if we recall…

P.S. That was quick: As we go to virtual press, House Ways and Means Committee Chairman Richard Neal says the weird wealth tax has already been scrapped — “dropped in negotiations over revenue measures to pay for President Joe Biden’s social-spending bill,” as Bloomberg reports.

We suspect, however, it’s not the last we’ll ever hear of the idea. To be continued…