It couldn’t come at a worse time either, seeing as Chinese real estate companies need to turn over $40 billion in debt by the end of 2022.

[That’s just junk-grade debt, by the way. Total debt due in 2022? “Property companies must come up with $92 billion as bond payments mature in the next year,” The Guardian says.]

According to Dealogic data, as of Wednesday, Chinese junk bond sales in October have fallen almost 90% off their five-year average to just $352 million… 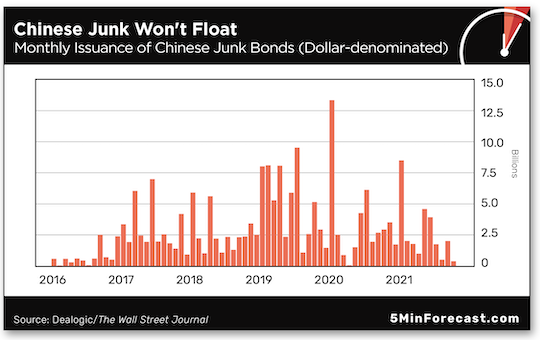 “With investors rattled by China Evergrande Group’s difficulties… Chinese junk bonds in dollars were yielding about 21.6% as of Wednesday,” The Wall Street Journal reports, “interest rates that effectively make issuing new debt too expensive for many companies.”

Property developers, in fact, comprise around 80% of China’s high-yield junk bond market, totaling $197 billion of debt outstanding, by Goldman Sachs’ tally. “These companies have typically relied on shorter-term borrowing, including in some cases issuing debt due in less than a year, which makes their refinancing needs more pressing.

“Industry participants are concerned that more Chinese property developers could struggle to repay dollar debt that comes due in the coming months,” the article says.

Meaning, Evergrande Group — although the largest — isn’t the only Chinese property developer at risk of default. Here’s one example: “Investors… suffered heavy losses after an unexpected default by Fantasia Holdings Group Co. on Oct. 4 helped trigger a sell-off in dozens of dollar-denominated property bonds,” the WSJ notes.

Then there’s Chinese developer Kaisa, second only to Evergrande in the amount of money it owes to foreign bondholders — $12 billion, to be exact.

On Wednesday, credit-rating giant Standard & Poor’s downgraded Kaisa to a CCC+ rating; by definition, then, the company is “vulnerable to nonpayment, and is dependent upon favorable business, financial and economic conditions for the obligor to meet its financial commitment on the obligation,” S&P says.

The domino effect is, well,in effect…

“One-third of China’s property developers will struggle to repay their debts in the next 12 months,” says an article at The Guardian. “The Chinese property sector as a whole owes an estimated $5 trillion, according to analysts at Nomura.

“That is one-third of [China’s] entire GDP and roughly equivalent to the whole output of the Japanese economy, the world’s third largest.” (Emphasis ours.)

In case your spine isn’t tingling yet, chief analyst John Kicklighter of DailyFX emphasizes: “Evergrande should be seen as a possible global threat rather than just ‘China’s problem.’

“The company is systemically important to the Chinese financial system that had seen its rules eased during the last financial crisis (2008),” he says. “Under such circumstances, moderate risks can turn into universal hazards.”

[About that… For the second time only, Treasury Secretary Janet Yellen and Chinese Vice-Premier Liu He hopped on a conference call Tuesday, according to The South China Morning Post. On the agenda? Trade-war issues, no doubt. Followed by “U.S. Treasury bonds and real estate group China Evergrande’s debt crisis,” SCMP surmises. In no particular order, we add.]

“The extent of a financial crisis of this sort is impossible to predict because regulators do not have enough information about the spider web of lending and the extent of counterparty risk to assess how far the damage can run,” Jim says.

Plus, China’s iron fist is really a weak hand. “The U.S. has some experience in managing financial crises,” Jim continues, “but China has almost none. They’re about to discover just how difficult managing a financial crisis actually is.”

To that point, China’s bedeviled Evergrande Group is contagious. “Capital Economics warned this week that China’s manufacturing and construction sectors were ‘on the cusp of a deeper downturn that could pull down China’s growth to just 3% next year,’” The Guardian says.

To say nothing of Evergrande investors if/when the inevitable massive default happens. (So far, the company’s managed to scrape up interest payments — at the end of one 30-day grace period. Another payment is due today.) In that event…

“Stockholders will get zero,” Jim says. “Bondholders may not even get 20 cents on the dollar.” U.S. investors aren’t immune either: You might even be holding Evergrande debt in emerging-markets ETFs.

Altogether, Jim says: “The Evergrande debacle will not culminate in a single ‘Lehman moment’ as many have speculated. This will be a long, drawn-out crisis more like a brush fire that spreads faster than the firefighters can extinguish it.”

To extend Jim’s uncontained brush fire metaphor, there will come a split-second when those on scene suddenly realize they’re in grave danger. Evergrande’s slow-motion collapse? The spark that ignites an economic wildfire. That’s why Jim’s urging readers to take protective measures now… In fewer than two minutes, you can check out Jim’s warning right here.

The Commerce Department is out this morning with “core PCE” — the Federal Reserve’s preferred measure of inflation. It was largely unchanged in September (0.2%) from August’s reading (0.3%).

Year over year that works out to an inflation rate of 3.6% — well above the Fed’s 2% target, but remember the Fed is OK nowadays with the number running hotter than 2%.

The same report shows personal income dropped a full 1% last month; at the same time, consumer spending dropped to 0.6%. “The spending and inflation numbers were in line with expectations, but the drop in income was larger than expected and may reflect the ending of federal stimulus programs,” says U.S. News. Duh?

Unrelenting inflation calls into question the FOMC meeting next week. There’s talk the Fed plans to taper its $120 billion per month purchase of T-bills and mortgage-backed securities by about $15 billion every month, starting in November or early December. We’ll have to wait and see…

The market seems relatively unfazed by reports of inflation… or even tapering, for that matter. The only exception being the Nasdaq, down 10 points to 15,435.

But Apple’s and Amazon’s lame quarterly numbers — stymied as they were by supply-chain obstacles — might have more bearing on the tech-heavy index. In the meantime, the Dow is up 70 points to 35,805 while the S&P 500 is up just three points to 4,600.

“Shiba Inu is the latest meme coin… promising it will make you an overnight millionaire,” says our colleague and crypto enthusiast Chris Campbell at e-letter Altucher Confidential.

In fact, he notes, Shiba Inu “leapfrogged Dogecoin to become the ninth-most valuable crypto in the world.” If you recall, The 5 detailed Dogecoin mania in April after Elon Musk tweeted: “Dogecoin is the people’s crypto.” And the Reddit crowd went wild…

[We’re left wondering if this is just a colossal Shiba Inu/Dogecoin mixup? On the level with web-conferencing company Zoom’s IPO (ZM) in 2019… when investors mistakenly piled into Zoom Technologies (ZOOM). After all, both crypto brands center around the same dog breed.]

But before you buy the other dog coin, consider this: “In the case of Shiba,” Chris says, “nearly 1/5th of the supply is controlled by two accounts.” 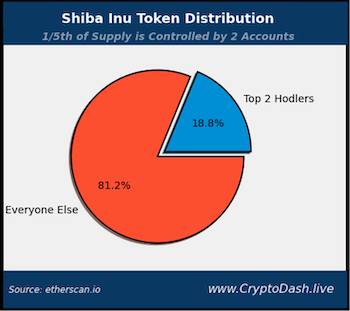 “Meaning at any given moment, if these accounts decide to dump, they could trigger a massive panic sell-off and crash the asset,” says crypto whale watcher Justin Gupta of CryptoDash.

“Cryptocurrencies are volatile as is,” says Gupta. “But when they are not well distributed, and only a few control a large portion of the tokens, they become even more so. This is because [a] few individuals can move the market at their whim.”

Chris concludes with a warning: “Crypto whales use meme coins as a gauge of how much new — and unsophisticated — money is moving into the crypto markets. And then they do everything they can to take that money from them.”

[No, Shiba Inu is not the next Bitcoin — more likely, it’ll wind up on the digital trash heap… For more rock-solid information, Chris Campbell and James Altucher are putting the finishing touches on everything you ever wanted to know about crypto… but were afraid to ask. We’ll share a link as soon as it’s available.]

“This week, I found a graph that caught me off guard,” says our retirement specialist Zach Scheidt. 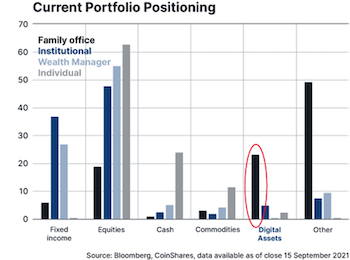 “Why is this important?” Zach asks. “Because family offices tend to be managed by many of the wealthiest and most influential investors in the world.

“This chart tells us while institutional investors, traditional wealth managers and individual investors are severely underweight digital assets, the ‘family office’ investors have made some big bets [on]… digital assets including cryptocurrencies, NFTs and similar investments.

“It’s an area of the market that I’ve been skeptical about,” Zach admits. “But as cryptocurrencies start to gain momentum in today’s financial world, the investment appeal is becoming more intriguing.

“As always,” he says, “my goal is to help you find the best ways to grow your wealth, while still protecting the retirement savings that you’ve worked so hard for.”

To the mailbag: “As the author of the feedback you published,” says a recent correspondent, “I’d like to remind the readers that every constitutional right has its limits.

“When it comes to free speech, the Supreme Court has upheld the restriction that you can’t yell, ‘Fire!’ in a movie theater. You also can’t threaten your congressman with physical harm. I would extend that limitation… to include inciting a riot and takeover of the government, yet that obviously is just fine with some of your readers. After all, it’s just free speech.

“As for the taming of Facebook (Meta), it should be bipartisan. It doesn’t matter whether a Republican or a Democrat. It shouldn’t matter who is in office.

“And by the way, thank you for publishing my feedback. I certainly never expected that.”

The 5: You’re welcome, sir… and bipartisan? What’s that?

Also, as our contributor notes, the cat’s out of the bag — Facebook’s changing its name to Meta to reflect the company’s metaverse aspirations. Perhaps we’re a touch clairvoyant? When we first introduced readers to the metaverse last month, the title of our issue: This Issue Is So “Meta.” Hmm…

“It is very hard to find objective views nowadays, and I value your perspective. I have not missed reading any in ~8 years, and I appreciate all your hard work in trying to stay in the middle.”

Eight years?! There’s no contest, you win the “most-committed reader” award! (But just to clarify, we don’t mean, you know, most committed.)

Thanks for the kind words… You all have a great weekend!