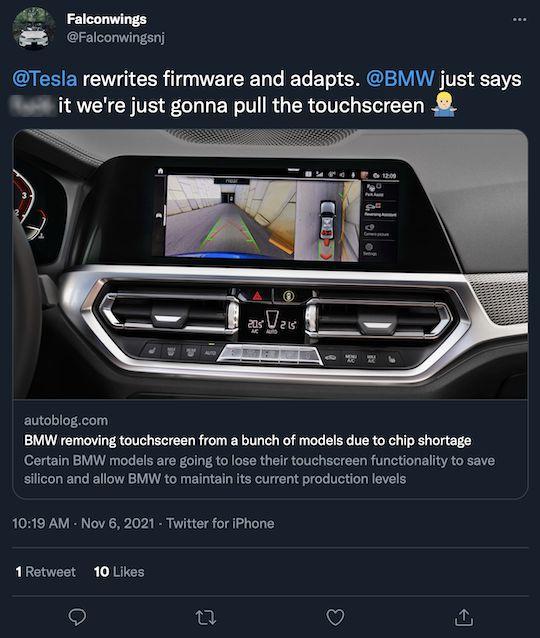 On one hand: Tesla, “[which] was better able to handle the current global chip shortage… because their software teams rewrote Tesla’s software in just two–three weeks, allowing the use of different chips,” says Elektrek.

On the other hand? German automaker BMW has surrendered to the global semiconductor shortage, deciding to eliminate touchscreens on models including the 3 Series, X5, X7 and more.

Instead, the automaker is offering a miniscule discount for compromising buyers. “Vehicles without touchscreen functionality should be arriving [at] BMW dealerships soon,” Autoblog says, “then it’s up to customers to decide if $500 is enough of a boon to still drive home their brand-new car without a touchscreen.”

Of course, the U.S. government is attempting to ease the semiconductor shortage with the CHIPS for America Act. At least, in theory…

But here’s an under-the-radar item — couched in a late-September White House briefing titled: “When the Chips Are Down: Preventing and Addressing Supply Chain Disruptions.”Oy…

“The Department of Commerce is taking new steps to improve data collection,” the briefing said, “by conducting a voluntary survey of [semiconductor] industry participants to both diagnose chokepoints in the supply chain and offer firms data that can help them adapt their production processes to adjust to the supply shortage.” (Yes, that’s onesentence.)

We were most struck by the “voluntary survey” issued by Secretary Gina Raimondo’s regime; the Commerce Department kindly requested a raft of data from chipmakers both here and abroad, with a deadline yesterday.

“Raimondo said that the goal of its voluntary request for information is to increase transparency,” TechCrunch reports, “and predict challenges amid a global semiconductor shortage.”

The big stick? “We have other tools in our toolbox that require them to give us data,” Raimondo menaced. “I hope we don’t get there. But if we have to, we will.” Voluntary, shmoluntary…

“According to a statement released on Sunday by the finance ministry, South Korea-based chipmakers are preparing for a ‘voluntary submission’ to hand over their internal data to the U.S.”

Albeit, the two South Korean chipmakers will only “partially comply,” withholding any trade secrets and the identities of their primary customers, pushing back against the Commerce Department’s intrusive questionnaire. 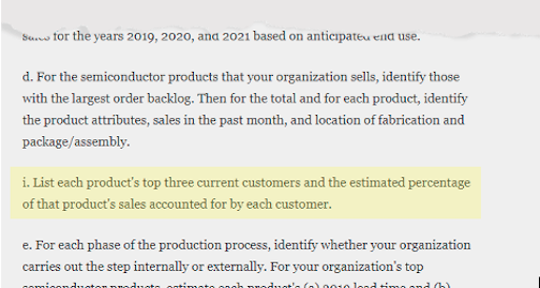 According to the Chinese communist mouthpiece the Global Times, the questionnaire is a ruse: “The request, unveiled by the U.S. Commerce Department in late September, smacks of an attempt to contain China’s tech rise under the disguise of addressing chip shortages.”

For instance: “[Chipmaker] TSMC and other possible submitters such as Samsung have partnerships with Chinese firms,” the article says, “including Huawei.”

[Ahh, Chinese tech giant Huawei… The last time we checked in on the Huawei saga, also in late September, the company’s CFO Meng Wanzhou was a free woman after a three-year detention in Canada — on espionage charges — as a favor to the U.S.]

The way the Global Times sees it: “The politically motivated request could by no means address chip shortage woes and is likely to hit legal snags and be met with legal action from Chinese firms in the event of losses.” Which sounds an awful lot like a threat…

To wit, in terms of the semiconductor shortage, the U.S. government might be more of a “problem creator, not solver,” the article concludes.

[Ed. note: According to our chief technology analyst Ray Blanco — regardless of government intervention — the chip shortage is here to stay, impacting practically everything we use in our daily lives: from electronic toothbrushes… to refrigerators… to automobiles.

So Ray’s putting the finishing touches on an exclusive briefing to identify some of the sector’s highflyers that should benefit from the chip shortage. Keep watching this space for a date and time.]

General Electric — the company founded by Thomas Edison in 1892 — is breaking up… GE announced this morning it will spin off into three publicly traded companies, breaking out along the lines of its aviation, health care and energy segments.

“The company said it hopes to spin off the health care business to shareholders in early 2023,” CNN Business says, “and that the separation of its renewable energy and power business will occur in early 2024. After the spinoffs, the aviation-focused company will keep the GE name…

“Shares of GE (GE) surged as much as 17% in premarket trading on the news before retreating to about a 6% gain in early trading after the open.” And at the time of writing, GE shares are up about 3.5%…

Welp, this is ominous…

“I want to say this loud and clear right now, that we risk a very low crop in the next harvest,” says CEO Svein Tore Holsether of the Oslo-based fertilizer company Yara International. “I’m afraid we’re going to have a food crisis.” 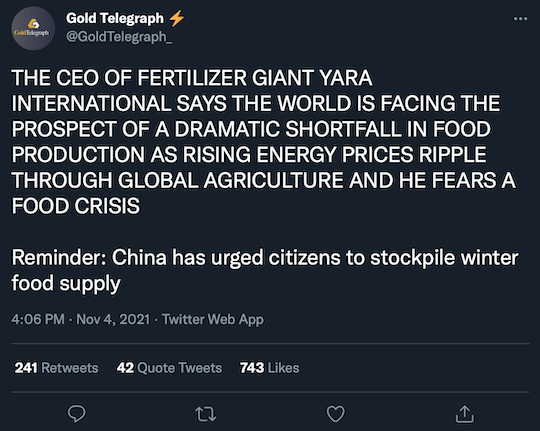 “Yara is a major producer of ammonia, a key ingredient in synthetic fertilizer, which increases crop yields. The process of creating ammonia currently relies on hydropower or natural gas,” Forbes reports. “The sharp rise in energy prices this summer and autumn [has]… resulted in fertilizer prices roughly tripling.”

Forbes mentions: “The delayed effects of the energy crisis on food security could mimic the chip shortage crisis.”

You know what they say about being forewarned…

“While the company will be using drivers to pilot the initial batch of vehicles in the city,” he says. “this appears to be the first step toward bringing driverless tech to America’s largest rideshare market.

“For now, the market seems to have given up on driverless tech companies as companies that went public via SPAC have fallen out of favor,” he continues. “Add to that, driverless tech has been lumped in with EV tech. And FAANG stocks have captured the lion’s share of tech’s market gains in recent weeks.

“But with driverless tech on the verge of steady adoption,” James says, “companies positioned to be leaders in the space could be tomorrow’s biggest tech companies.

“Companies including Embark and TuSimple are preparing to deploy their driverless 18-wheelers en masse onto highways in the coming months to help resolve the national truck driver shortage.

“For now,” James concedes, “I think these companies are still a bit overpriced, and I’m waiting on a pullback in the market before making a move on any investments.” He’ll continue to watch the space for “winning opportunities.”

“What people don’t seem to realize is that [schools] have the option to move their hours of opening and closing,” says a reader, regarding daylight saving time.

“If schools open at 8:00 a.m., move it to 9:00 or vice-a-versa. Is there some law that says hours of operation are set in stone? It’s like comedian Robert Mac says: ‘It’s not rocket surgery!’”

The 5: Perhaps that might work for small — mainly private — schools. But as a parent, toggling a school’s schedule to adjust for DST isn’t a feasible option. Kids need predictability… if the pandemic has taught us nothing else.

“You wrote quite a lot about DST and how it is so bad,” says another. “I happen to like it and look forward to it…

“One fact you failed to mention is the Uniform Time Act of 1966 gave all 50 states only two options: Standard time year-round or DST. Only two states chose standard time all year.

“There are currently 19 states that have passed legislation to stay on standard time all year. Mine is one of those. But the feds have to approve it, and they have not done so.

“I know a lot of farmers. I have never heard any complaints about DST. Where I live, it would be daylight at 4:30 a.m. in June, and I have free-range chickens that need to be turned loose at daybreak. I would be up an hour earlier EVERY day during the summer. F that!”

I told Dave I was grateful for DST this morning too, after I was able to walk a local trail at 6:30 a.m.… sans flashlight. His reply? “You mean you’re grateful for standard time.”

Fair point… Have a good one, and we’ll be back tomorrow.