Will Biden Use Nixon’s Playbook?

We’re just going to put it out there as the week winds down: What if Team Biden decides the most effective way to combat inflation is… price controls?

Yeah, we know. As we sometimes warn readers when they go on apocalyptic flights of fancy in our mailbag section, “Don’t give the bastards any ideas.”

But it’s been 50 years, give or take, since Richard Nixon’s wage-and-price controls. Plenty of people alive today weren’t around then. And even many of those who were around have forgotten how price controls create shortages where none existed before — or they make existing shortages worse. 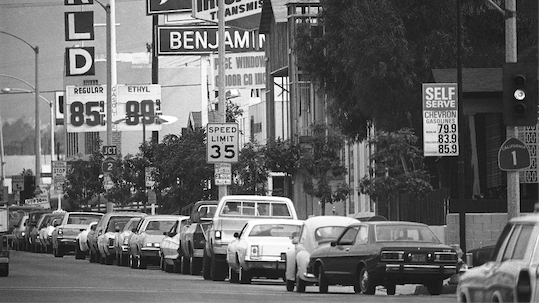 In an alternative timeline, Nixon left well enough alone and gas was much more costly… but at least it was available.

Is it likely? Probably not now. We’re just saying that for the governing class, it’s no longer unthinkable the way it was in the times of, say, Reagan or Clinton.

For the time being, the White House is trying to concoct a narrative that if only Congress would pass its proposed $1.85 trillion health care-education-climate spendapalooza… well, that would goose the supply of goods and services throughout the economy, thus easing price pressures.

For real. “I think if your concern is the cost of living,” says White House chief of staff Ron Klain, “the Build Back Better bill is the best answer we have to bring those costs down.”

Yeah, even this morning’s The New York Times isn’t buying what they’re selling… 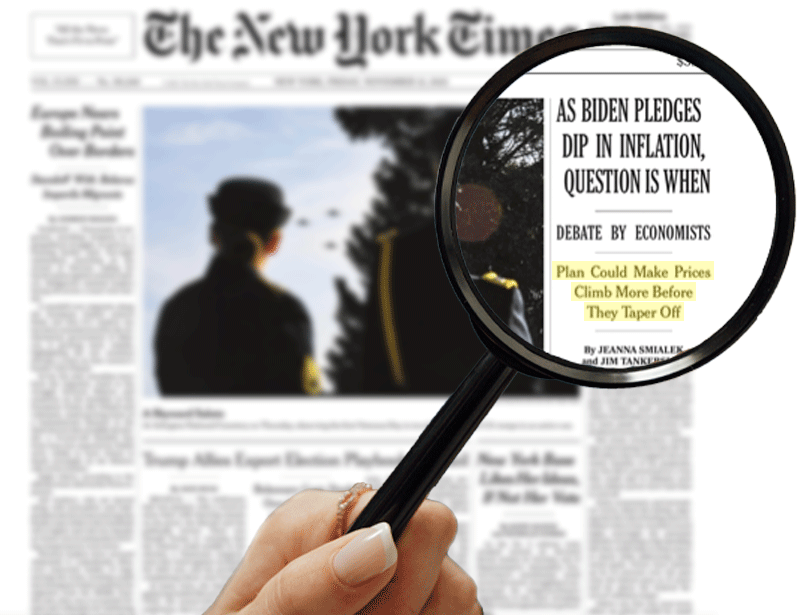 Meanwhile, the buzz in the oil-trading pits is that the White House released some crude this week from the Strategic Petroleum Reserve, but without making a big deal about it.

Which would go a long way to explain crude’s precipitous drop from nearly $85 a barrel two days ago to $80.68 this morning…

Thing is, there’s a critical difference between previous inflationary episodes in our lifetimes and the present moment.

Namely this: Low, low interest rates are hosing fixed-income investors in a way they’ve never been before.

“Inflation is a big deal. Especially if you’re on a fixed income and have rising expenses,” says our income investing specialist Zach Scheidt.

“You need to be able to generate income faster than the rate of inflation. That way you’re getting ahead and growing your wealth (instead of just spinning in place).”

And to be clear, Zach isn’t addressing only retirees and risk-averse investors here…

“Income should play an important role in any investor’s portfolio,” he tells us.

“Income gives you versatility: You can use it to cover day-to-day expenses. Or you can reinvest income, creating compound profits and even bigger future income payments. Or you can funnel income into new aggressive plays so you always have some new cash to put into fresh breakout opportunities.”

The media’s “inflation dragging down the stock market” yammering looks even sillier this morning than it did yesterday.

Yes, they’re still below their record closes of last week. But given the huge ramp-up in recent weeks, a minor pullback is a healthy thing.

The market shrugging off inflation is no surprise to our floor-trading veteran Alan Knuckman. High oil prices? He reminds us we had $80-or-higher oil every year from 2009–14… but the stock market roared higher regardless.

Longer term, he sees the stock market continuing its current march upward, for the same reason he’s cited before — those low, low interest rates. It’s the TINA trade: “There is no alternative.” “Until 10-year Treasury rates return to the 2007-era 4-5% range, stocks should remain solid.” (Ahem… a 10-year T-note yields 1.56% this morning.)

Gold is set to end the week at its highest levels since June — which is even more impressive than it sounds.

As we write, the bid is $1,862… and those five-month highs come at a time of both dollar strength and cryptocurrency strength.

Typically, gold is strong when the dollar is weak relative to other major currencies. But right now the U.S. dollar index is over 95 — the highest since July of last year. 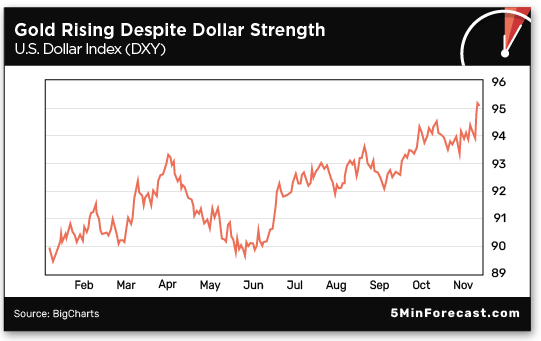 In addition, gold’s rally this week comes at the same moment many cryptocurrencies reached all-time highs — which defies a line of thought that says crypto is attracting investor dollars that in days gone by went toward precious metals. (The major cryptos are down somewhat today, Bitcoin at $63,192 and Ethereum at $4,582.)

Helping gold along lately is the Central Bank of Russia, says our macroeconomics maven Jim Rickards.

It doesn’t really show up on a long-term chart, but the total is rising again… 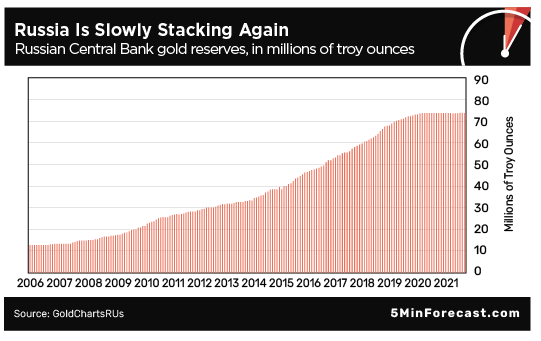 “Russia is running the world’s most sophisticated hedging operation inside its global reserve account of hard currencies and gold,” Jim explains. “The object is to maintain gold at about 20% of total reserves. This goal was achieved in early 2020, which accounts for the fact that purchases tailed off after that.”

So what changed this summer? “Russia’s reserves are now bulging because of the steeply higher price of oil,” says Jim.

“This increases Russia’s dollar reserves since oil is priced in dollars. If dollar reserves are increasing and Russia wants to maintain gold at 20% of total reserves, it has to buy more gold to maintain the allocation. This is no different than what everyday investors do when they rebalance target portfolios to account for large gains or losses in a particular asset class.

“It’s also consistent with Russia’s hedging objectives. If the dollar retains its value, gold may not move much in price. Still, the allocation of gold in the portfolio acts as insurance. If the dollar crashes in value, the dollar price of gold will soar and Russia’s losses on its dollar portfolio will be offset by gains on its gold portfolio.

“On current form, the dollar is losing value at least in relation to oil. The dollar price of gold has not moved much. So that’s an opportune time to buy gold to maintain the hedge without paying a premium.”

Other central banks around the world are also adding to their gold reserves of late — especially Thailand and Brazil. “Central banks are buying gold to stay ahead of the curve,” Jim concludes. “Shouldn’t you do the same?”

“I came across the following snarky quote,” writes a Financial Reserve member, “and edited it slightly, but it impressed me.

“‘The radio was announcing Veterans Day ceremonies happening tomorrow. One of the outdoor ones they mentioned is requiring proof of vax to attend. So you now have to show you’ve given up your rights and freedoms to pay your respects to those who fought and died to protect them.’”

The 5: *Sigh* One more reason to restore the original meaning and name of the holiday, Armistice Day.

Yeah, we know, fat chance. As we noted in consecutive episodes of The 5 during September, the military-industrial complex and the vaccine mandate are part and parcel of one Leviathan.

Speaking of which… the Fifth Circuit Court of Appeals sure is taking its sweet time deciding on a permanent injunction against the mandate: The temporary stay came on Saturday, the feds filed their appeal on Monday and the petitioners filed their response Tuesday. What’s up?

Now for an unusual reader inquiry: “When something amuses the writer of The 5, regardless of which writer is writing, a ‘heh’ is inserted.

“Just wondering if this ‘heh’ is actually uttered out loud so a HOL is created or if this is more of a HIS (Heh in Silence)?

The 5: It’s been a convention of ours going back to our founding editor Addison Wiggin. Most of the time, seeing as writing is a solitary act, it is observed in silence.

On the other hand, if you’re reading this and something makes you chuckle and someone else is in the room… well, most of the time it’d probably take too long to explain, right? Heh…