We’ll call him a wannabe celebrident… but he refers to himself as the “CEO of El Salvador.” Ugh.

The old-ish millennial President Nayib Bukele — he was born in 1981 — held a rave-like event on Sunday, complete with lasers, smoke machines and pyrotechnics. (No word on MDMA…) 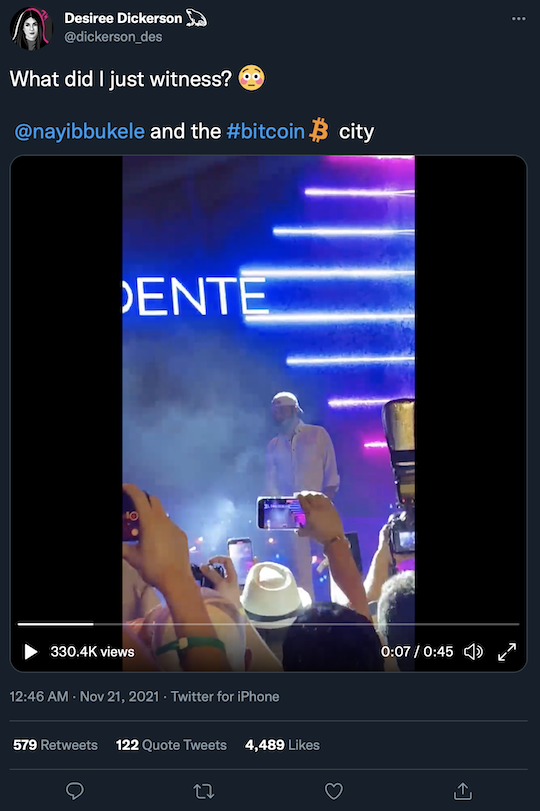 The reason for wildin’ out? The president announced plans to build a city in the southeastern region of El Salvador — at the base of a volcano — that pays homage to the Central American country’s new legal tender, Bitcoin.

“The city will be circular to represent the shape of a large coin,” the BBC reports. “The site [will] take advantage of the Conchagua volcano’s geothermal energy to power Bitcoin mining.” While there’s no firm timetable at present, the president estimates the city’s construction will cost around 300,000 Bitcoins (give or take).

That’s about 17.2 billion in U.S. dollars at the current exchange rate.

But according to Bukele, the city will have it all: “Residential areas, commercial areas, services, museums, entertainment, bars, restaurants, airport, port, rail — everything devoted to Bitcoin.” Plus, no income tax — just a value added tax (VAT) will be levied.

Quick reminder: base of a volcano…

But now it might be easier to get your hands on a crypto miner than you think. (By miner, we mean the computer rig used to crunch the numbers, not the sallow dude in a hoodie you’re probably picturing.) That’s because when China outlawed crypto in May, Chinese crypto farms had to expatriate their mining hardware.

“China’s ban on cryptocurrency mining… triggered an exodus of miners and a global race to relocate millions of the clunky, power intensive machines,” Financial Times says. “The ‘frenzied liquidations’ triggered by China’s ban caused the price of an Antminer S19, a popular model among industrial miners, to fall by 41.7% from May to July.

“Fourteen of the biggest crypto mining companies in the world have moved more than 2 million machines out of China in the months following the ban,” the article continues.

“The lion’s share of machines was hastily moved to the U.S., Canada, Kazakhstan and Russia.” Nearly two-thirds of the mining rigs landing in countries closest to China… 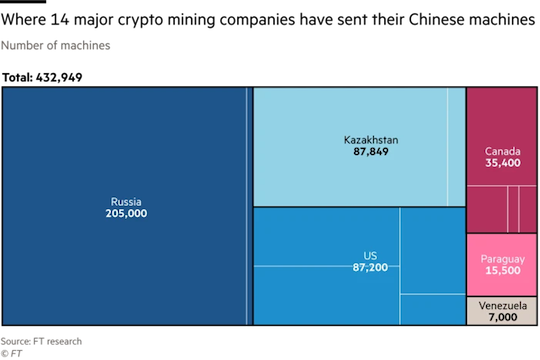 “Older generation machines [have been] scattered to less established mining locations such as Venezuela or Paraguay, where there is less regulatory stability but cheap electricity prices,” says FT. “Owing to Venezuela’s battered economy, mining cryptocurrency is a way for locals to top up their earnings.”

In Caracas, for instance, Juan Jose Pinto — co-founder of crypto mining company Doctor Miner — is capitalizing on cheap electricity ($0.01 per kWh) and Chinese contacts to re-home about 7,000 miners. And Mr. Pinto’s gotten resourceful: he keeps a “cemetery” of busted rigs to source parts.

“People mine in their houses with just one machine,” Pinto says. “In other countries, there are a few big guys with farms, here there are thousands of people with small farms. Making $100 extra per month makes a huge difference for them,” he concludes.

[Ed. note: We think crypto can make a “huge difference” for Main Street investors like you, too.

And former hedge fund manager and early crypto adopter James Altucher wants you to be part of crypto’s next groundswell.

He believes even if you don’t own crypto yet, you still haven’t missed out… because he’s identified a handful of next-gen cryptos with Bitcoin’s exponential potential.

He’ll explain the details during an exclusive briefing we’ve set for tomorrow at 1:00 p.m. EST. Please don’t miss it. We’ll remind you about it again tomorrow.]

One Nasdaq-listed stock is on pace for its worst day ever. At the moment, Zoom Video Communications is down a little over 18% after warning investors in yesterday’s earnings call that revenue growth is slowing down. In fact, here’s a visual of how tech companies including Zoom are getting hammered…

“I don’t like to see this selling spread throughout the market — especially on a holiday week during a typically bullish time of year,” Greg notes. “While it’s true that many of the tech growth names were overextended, we’re seeing other areas of the market also begin to buckle under the selling pressure.”

Commodities? Gold has retreated 1%, back below $1,800 per ounce, and silver’s down 3.7% to $23.40. Could this backslide be based on the asinine theory that Jerome Powell will be a better inflation fighter than Lael Brainard? 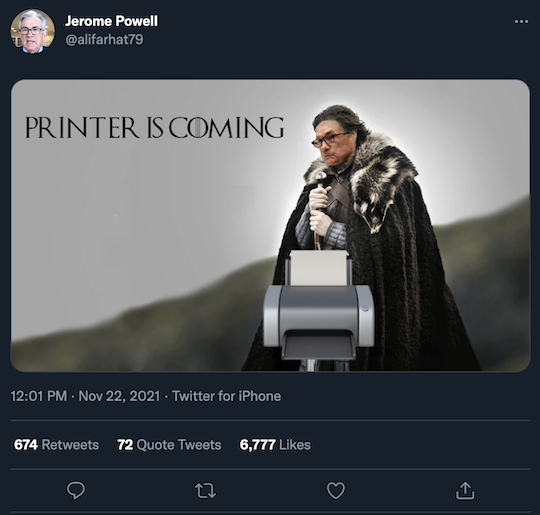 Then there’s the hand-wringing about how the Strategic Petroleum Reserve is for emergencies and not to lower prices… Not that it’s working. This after the White House said yesterday it would release 50 million barrels of crude from its federal stockpile.

With that, oil’s up 2.2% to $78.84 for a barrel of WTI. Our resident geologist Byron King says: “In essence markets say, ‘Thank you for the SPR oil, but we saw it coming. And we view your pathetic, piddling release of a rounding-error volume of daily oil demand as merely a sign of your desperation.’”

For the major economic number of the day, IHS Markit’s headline composite “flash PMI” number — which includes the manufacturing and service sectors — dropped to 56.5 in November, down from a reading of 57.6 in October.

Even though manufacturing (accounting for just 12% of the economy) picked up this month, the service industry (two-thirds of economic activity) missed economists’ expectations: 57 versus an anticipated 59.

“High inflation is a huge threat to your savings. As the prices of goods and services

rise with inflation, the purchasing power of each dollar you hold dwindles.

“And while precious metals like gold and silver tend to be driven by investor sentiment,” Zach says, “copper is a direct tie to the economy as a whole.

“In addition to global infrastructure spending, inflation is another factor helping to push the price of copper higher this year,” he says. “As inflation drives the dollar value of commodities like copper higher, anyone sitting on large reserves of the metal stands to profit from the trend.

“A perfect play for today’s economy?” Zach posits. “Southern Copper Corp. (SCCO) is one of the world’s largest copper producers with mining, smelting and refining facilities in resource-rich areas like Mexico and Peru.

“And with interests in over 825,000 hectares of mineral exploration concessions throughout its holdings in North and South America, Southern Copper sits on the highest copper reserves in the industry — a reported 67.7 metric tons of the red metal.

“As governments around the world pour money into infrastructure spending and drive demand for copper higher,” says Zach. “Copper producers” — including SCCO — “will be among the most direct beneficiaries.”

Zach’s takeaway: “Commodities like copper offer you a great hedge against inflation.”

It was only a matter of time… 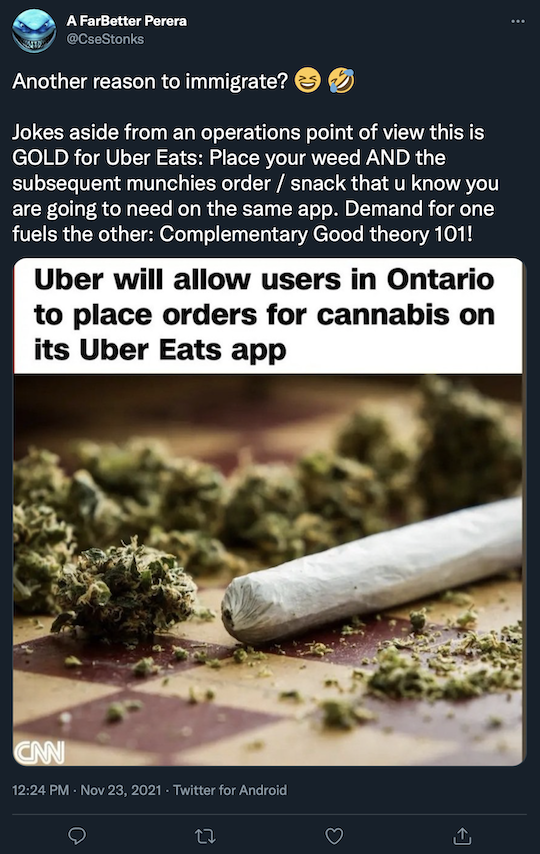 If you live in Ontario, Canada, you can now order cannabis through the Uber Eats app.

But all is not what it’s cracked up to be: Uber won’t be delivering weed alongside your pad thai; instead, after placing an order with the company’s cannabis partner Tokyo Smoke — owned by Canopy Growth — you’ll still have to pick it up in person.

“I was one of the 17,000 who sought to purchase the Constitution,” a reader writes about ConstitutionDAO’s effort to buy a first-edition copy of the document.

“Imagine being able to tell people you own a copy of the Constitution (along with 17,000 other people, if they really need to know). It would have been a great step forward for DeFi and would have brought a lot more attention to the benefits of blockchain tech and cryptocurrencies.

“I had no idea who Kenneth Griffin was until I read it here. Sounds as if we were doomed from the start. Worth a shot, however. Now the DAO is working on the best way to return over $40 million in Ethereum to contributors.

“It was funny to read about Chipotle shortages. I drove to my local Chipotle today here in NJ and the sign on the front door said: ‘Not open until 1:30 p.m. today.’ (My apologies for not taking a picture for you.)

“What’s up with that? By the time employees open at 1:30 p.m. and start cooking the chicken, steak and other food prep, it would be 2 p.m. Lunch is over. Makes no sense to me.

“Maybe no employees available? No one wants to work before 1:30 p.m. EST? No idea… very strange.

The 5: See the economic number of the day above (i.e. service sector)…

“Real good solution to the port pileup,” says a reader with a front row seat in California. “I looked at the pier outside work in Long Beach…

“They are offloading ships fast now. Just stacking containers on the pier. What happens when they have no more room on the pier? Great solution.

“I was also told by a longshoreman that the problem isn’t truckers. The truckers can’t get the carriages to move the containers. A shortage of carriages.”

The 5: Thanks for forwarding your first-person observations…

We’re not exactly sure what you mean by the word carriages. If you mean long-haul trucks, we mentioned a parts shortage was holding up production of a quarter million Class 8 trucks. And in an email, Zach Scheidt mentioned how the steel shortage was affecting the production of truck chassis.

Seems you can’t swing a cat these days without hitting some supply-chain shortage… Not that we’d recommend it.

Take care, and we’ll be back tomorrow…

P.S. Reminder: James Altucher takes the wraps off his newest and most ambitious cryptocurrency project tomorrow at 1:00 p.m. EST.

If you’re looking at the staggering gains people have made from early-generation cryptos like Bitcoin and Ethereum… and feeling as if you missed out… James says the next generation could prove to be even more lucrative.

You don’t have to sign up or anything in advance. We’ll shoot you an email with the link as soon as he goes “live” — again, that’s tomorrow at 1:00 p.m. EST.