The Federal Reserve has just issued the following conclusion about a CBDC, or central-bank digital currency: “This stuff’s too hard to figure out.”

The mainstream take, of course, is somewhat more reserved…

The headline begs the question of how many “steps” are required.

Nearly two years ago, congresscritters were pushing Fed chair Jerome Powell on the question, and he said the Fed has a “lot of projects” underway and would “keep the fire lit” in its pursuit of a digital currency.

But only yesterday did the Fed get around to publishing a 35-page paper laying out what it sees as the potential risks and benefits. And it immediately punted by opening a 120-day public comment period.

(Seriously? Since when did the Fed care one whit about what you and I think? As long as we don’t pick up torches and pitchforks, anyway…)

But perhaps we should back up and first get our terminology straight: CBDCs “are not cryptocurrencies, although the two are often confused,” says our macroeconomics maven Jim Rickards.

“A true cryptocurrency is recorded on a blockchain, has a decentralized issuance network and is loosely regulated if at all. A CBDC is issued by a central bank, which makes the issuance and governance highly centralized.

“Most importantly, a CBDC is a new form of payment, but not a new currency. The digital currencies would still be dollars, euros, yen or yuan depending on the central bank.”

So what’s the point? “The goal of CBDCs is to eliminate paper money,” says Jim.

“Once money is 100% digital, it will be easier for central banks and finance ministries to impose negative interest rates, confiscate account balances for politically incorrect behavior and impose withholding taxes directly on your bank balances.

“Even worse, a fully digital payment system run by a central bank is an ideal surveillance mechanism because the currency issuer will know every purchase you make and your physical whereabouts when doing so. This is the ultimate in totalitarian surveillance.”

So to be clear, we’re not pushing the Fed to get off the dime here. On the contrary, we find it a relief that the Fed is taking its sweet time.

We’re guessing what’s holding up the Fed is that it still wants to figure out how to set up a CBDC in a way that all the big banks can still collect all their juicy middleman fees — which both CBDCs and cryptocurrencies have the potential to eliminate.

Meanwhile, China introduced its own CBDC last year and by most accounts is planning a big rollout during the Winter Olympics next month.

When it comes to digital currencies, we see three giant blocs potentially forming around the world…

Only yesterday, Russia said it may be about to join China in banning crypto mining and trading. At the same time, both nations — as we’ve chronicled for years now — are pursuing “de-dollarization” measures to escape the impact of Washington’s sanctions and other forms of economic warfare.

This is a storyline with a long arc. We’ll stay on top of it…

Of course, that’s all in the future. This morning, crypto enthusiasts are way more concerned about a wicked sell-off in their preferred asset class.

At one point, Bitcoin and Ethereum had both tumbled 10% in a matter of hours. Some of those losses have since been recovered, but still… Bitcoin sits at $38,912 as we write, and Ethereum at $2,837.

“Crypto prices are good for one 50% correction a year,” tweets Jim Bianco of Chicago-based Bianco Research. With BTC and ETH both down 40% or more from their November peaks, we’re well on our way.

The action in stocks brings new meaning to the word “volatility.”

When we went to virtual press yesterday, we characterized the day’s movement as an oversold bounce. Then the bottom fell out. Again… 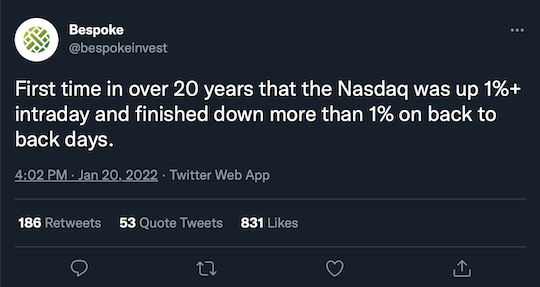 The major averages opened down big today… but at last check they’re trying to stage a recovery.

Mr. Market has settled into a mindset that the Federal Reserve is willing to sacrifice the stock market if that’s what it takes to put inflation back in its box. We described this mindset two weeks ago.

Yes, the Fed is liable to raise the fed funds rate four times this year. That would bring the rate from near-zero levels now to about 1% by yearend.

In historical context — even the context of the Fed’s most recent rate-raising cycle — that’s still exceptionally low. 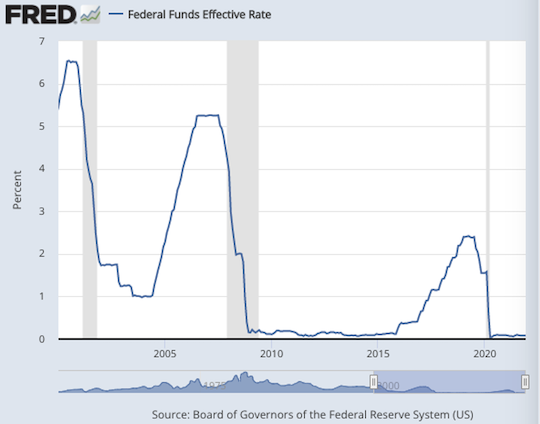 “If you don’t think that’s cheap, we got to have a whole ’nother conversation,” Alan said yesterday in a video briefing for subscribers of The Profit Wire.

“So we still have very, very, very low rates.” And as long as rates are low, Alan says money seeking a return will inevitably continue gravitating toward stocks.

For all the buzz generated this week by Microsoft’s buyout of the video game maker Activision Blizzard… the media missed the most important part of the story.

But it’s the way Microsoft pulled off the deal that caught the attention of our Zach Scheidt.

“I’m impressed with the amount of cash that MSFT generates year in and year out,” Zach says. “Last quarter alone, the company generated $24 billion from its business operations.

“I consider Microsoft’s income a ‘secret weapon’ of sorts when it comes to the company’s competitive advantage.

“By generating plenty of income quarter after quarter and allowing that income to accumulate for years, Microsoft was in the perfect place to take advantage of a great opportunity when it came around.”

Activision, having lost nearly half its market value amid a sexual-harassment scandal, was a “great opportunity.” And MSFT had the cash hoard to pull it off.

“Some say it was lucky that Microsoft happened to have the cash ready to scoop up ATVI when the stock dropped so sharply,” says Zach.

“I like the saying ‘Luck is when opportunity meets preparation.’ And Microsoft was certainly prepared thanks to the income it has been diligently saving for the last decade.”

And here’s the thing: Zach says you can do what MSFT did. “If you buy dividend stocks or use my favorite put-selling strategy to steadily collect income from the market, that income will accumulate in your brokerage account.

“Week after week, month after month, you’ll accrue more and more cash in your account.

“Then when new opportunities emerge (like the sharp decline for ATVI’s stock) you’ll be sitting on a pile of cash you can use to take advantage of the discounts the market inevitably offers.”

Oh, like now — when the market as a whole is selling off and quality names can be had more cheaply than a few weeks ago.

We know new cars are in short supply, but… 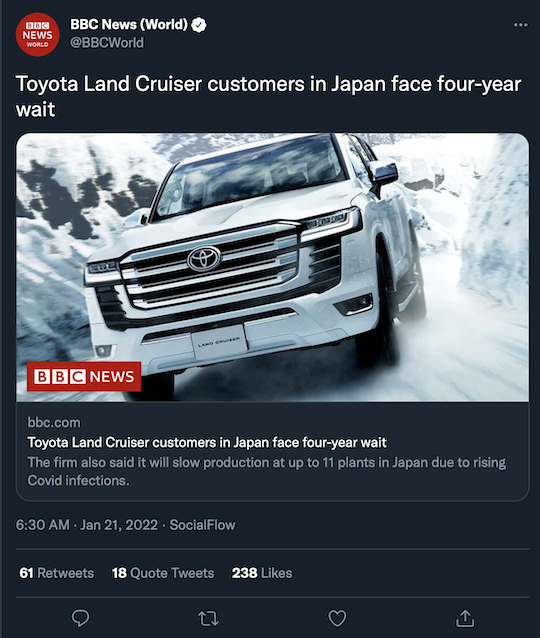 In Toyota’s home country, buyers now face a four-year wait for the redesigned version of its legendary Land Cruiser SUV.

The company says it’s not a matter of the supply chain or chip shortages. It’s just plain high demand. “We sincerely apologize for the fact that Land Cruiser has been very well received not only in Japan but also around the world.”

The new edition of the Land Cruiser made its debut last year — 70 years after the first model was produced in 1951. True, it has a reputation as the vehicle of choice for third-world guerrilla movements… but it has cachet nearly everywhere in the world.

Except North America. Toyota discontinued the Land Cruiser in the U.S. market last year, and even then it was available only in high-end version starting at $86,740. If you really want one, the 2022 Lexus LX 600 is mechanically similar, we’re told — and available. At an even higher price…

“Thanks for your addendum to my note in yesterday’s edition,” writes the fellow who emailed us to relate his experience with the virus.

“I had left out the fact that, despite my age, I’m among the dirty unvaxxed (I live in flyover country, after all), but consider my recent bout of OMG better than any gene-modifying vax. Those are real, live antibodies swimming around in my system now!

“Regarding the vax, am I the only one who finds it ironic that the very same people who would rather starve than eat any GMO’ed food product insist that all individuals themselves have to become GMO’ed in order to be worthy citizens?

“Thanks for being one of my most trusted news sources.”

The 5: We’re relieved that you said “one of.” The 5 is, to paraphrase the cereal commercials of days gone by, only part of a well-balanced informational diet.

“Let me start,” says another note of praise, “by saying I think it’s awesome how you attack both sides of the political spectrum. With all the crap going on I’m almost with you about not voting.

“Now the real reason I’m writing is as you know there is a drought in the West,” this reader goes on. “Lake Powell and Lake Mead are very low, causing many panic buttons to be pressed.

“What to do with all the salt? Yucca Mountain now that Harry Reid no longer runs Nevada.

The 5: Hmmm — a costly proposition that would be. But of course when you’re talking about the gummint, money is no object.

“Thank you for the quality of your content!” says a final note of praise.

“I am thankful for the intelligent reporting and excellent big-picture observations that grace your content… I have become a fan! 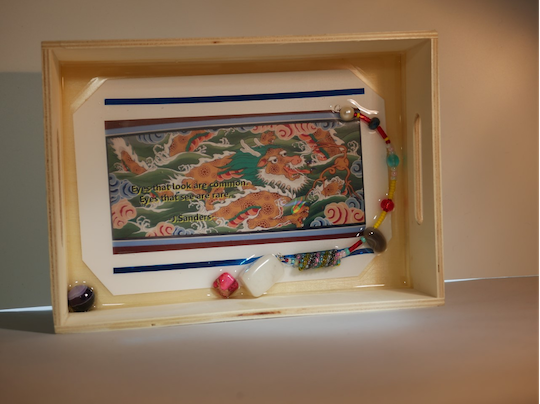 The 5: Hard to make out on a tiny screen, but the words say, “Eyes that look are common. Eyes that see are rare.”

It’s attributed to John Oswald Sanders, who Wikipedia tells us “was a general director of Overseas Missionary Fellowship (then known as China Inland Mission) in the 1950s and 1960s. He authored more than 40 books on the Christian life.”

Have to say we’d never heard of him until today. But one of the great things about assembling this e-letter is the correspondence from other folks with diverse experiences and fields of knowledge. So thanks for giving back!