Life comes at you fast: Barely two months ago, we mooted the possibility the White House would resort to price controls to combat inflation.

As in, the kind of price controls that led to gas lines during the 1970s “oil shock.”

We were merely musing. We had no supporting evidence. And thus we said the prospect wasn’t especially likely. “We’re just saying that for the governing class, it’s no longer unthinkable the way it was in the times of, say, Reagan or Clinton.”

Fast-forward to The New York Times a week ago today: “America’s recent inflation spike has prompted renewed interest in an idea that many economists and policy experts thought they had long ago left behind for good: price controls.”

Not that price controls would be the White House’s first resort. Better if Jay Powell and the Federal Reserve reel in the big inflationary fish on their own.

The president said as much during his press conference yesterday when he deemed it appropriate for the Fed to “recalibrate” its loose monetary policy.

Still… he underscored the gravity of the situation, and it wasn’t hard to read between the lines. 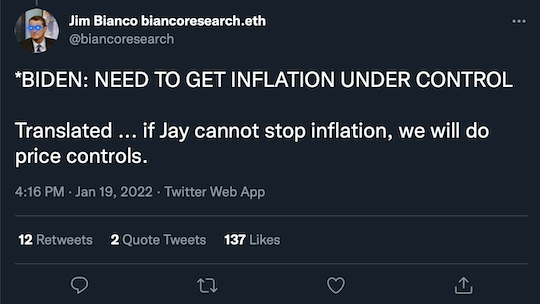 With publication of the NYT story, price controls become an acceptable topic of discussion among the chattering classes at their socially distanced and/or Zoom-only cocktail parties.

“If the Times says it, it is OK for everyone to say it,” per our colleague Jeffrey Tucker.

Mr. Tucker took the bullet of reading the article start to finish so you don’t have to. The piece took great pains to draw a distinction between Richard Nixon’s 1970s price controls — which boomer and Silent generation voters do not remember fondly — and those under FDR during World War II.

From the article: “Wartime price caps typically came alongside rationing, in which the quantity of goods people were allowed to buy was limited, said Rebecca L. Spang, a money historian at Indiana University. ‘If you try to have price controls without rationing, you end up with shortages, you end up with purveyors pulling their goods from the market,’ she said.”

Gee, we can hardly wait for digital-era rationing coupons — activated on a smartphone, no doubt, with even more of your privacy shredded…

“But hey, there’s more,” Mr. Tucker warns. “The key is to impose controls that are product specific and time limited. You know, like two weeks to flatten the curve!”

In the stilted language of the Times piece, “By instituting temporary and product-specific price caps, the logic goes, the government could ensure that the poor don’t end up getting gouged. Fans say lower prices would give an incentive to companies to sell as much as they can possibly produce at the permitted price.”

“There we have it,” Jeffrey says. “Long lines. Rationing. Unavailability of goods that you want. This is what happens when you disable market forces. It screws up everything, but government officials have a ball playing market.

“Here we go again, with the great excuse of the virus being deployed as yet another occasion for intensifying controls on the people. They won’t work, obviously. But this time they won’t make the mistake of failing to impose rationing at the same time. It will be all about gas, heating oil and food.

“Mark my words: Some version of this is coming.”

But at least you’re getting early warning here. Just in case you want to fill a couple of jerry cans and do a stock-up run at Costco to beat the rush…

To the markets today, where stocks are enjoying an oversold bounce.

Stateside, the big economic numbers of the day are both major disappointments: First-time unemployment claims leaped to 286,000 in the week gone by — the highest level in three months. Meanwhile, existing home sales fell 6% in December — and that was before mortgage rates started zipping higher.

Crude is rising again after the latest inventory numbers from the Energy Department. A barrel of West Texas Intermediate fetches $87.70, yet another highest-since-2014 level.

People who pay closer attention to these matters than we do say if gold can manage a weekly close over $1,830 tomorrow, the Midas metal is probably moving back into a solid uptrend. If not, expect still more sideways chop.

Cryptocurrencies are making the big leap precious metals did yesterday and the day before — Bitcoin up more than 4% to $43,400 and Ethereum up nearly 5% at $3,252.

Gold should get an additional bump from a looming fall in the dollar, anticipated by our macro maven Jim Rickards.

“We’ve come through a long period of what can be described as the reign of King Dollar,” Jim says. “A trend of higher interest rates on U.S. Treasury securities made dollar investing relatively attractive compared with other currencies such as the yen or euro that had benchmark rates at or below zero.

“This (relatively) high rate environment was amplified by a strong desire, especially among European banks, to acquire U.S. dollar-denominated collateral, mostly in the form of U.S. Treasury bills. This buying was driven not primarily by a demand for dollars, but rather by a demand for safe liquid collateral that could be used in repurchase agreements and similar arrangements to leverage balance sheets.

“Regardless of how a bank thought about the dollar intrinsically, they had to acquire dollars to buy the Treasuries to support their leveraged portfolios. The end result was the same – a strong demand for dollars.”

But as we mentioned last week, the dollar is now sinking against other major currencies — the euro, the pound, the yen and the Swiss franc.

“What these exchange rate moves are telling us,” says Jim, “is that U.S. dollar interest rates may have peaked and are getting ready to turn around.

“Gold may be signaling a weaker dollar ahead.”

For the record: One thing the pandemic hasn’t changed is the outflow of people from New Jersey.

Of all the moves handled by United Van Lines in the Garden State last year, 71% were outbound. That’s according to the company’s annual National Movers Study.

New Jersey has topped the outbound list for four years now. The rest of the top five this year are also high-tax, high-cost-of-living states: Illinois, New York, Connecticut and California.

The bottom and top 10 are shown here… 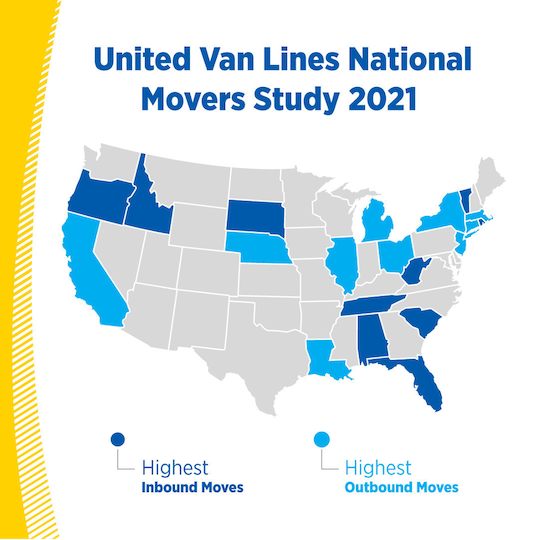 At the opposite end of the spectrum is Vermont, with 74% of moves inbound — followed by South Dakota, South Carolina, West Virginia and Florida.

Along the same lines, U-Haul reports the greatest one-way net loss of its trucks in California and Illinois… with most of that traffic bound for Texas and Florida.

Per an article at Fox News, “California’s net loss was not as significant as it was in 2020, but here’s the kicker: U-Haul says that was partially due to the fact that the company ‘simply ran out of inventory to meet customer demand for outbound equipment.’” Heh…

Speaking of California… a reader writes after our uncommon take on the 5G dispute between the wireless companies and the airlines.

“Just a ICYMI… I don’t think this is the telecoms’ only problem. This week AT&T service in a San Francisco Bay Area town (business area) was down for several blocks for two days. Come to find out someone climbed a utility tower and stole AT&T’s copper.

“BOOM! This pretty much falls into the category of crazy California lawlessness. Government just ignores this kind of thing rather than addressing why California (and other places) is circling the toilet and the exodus is on. I think it’s fair to say you can’t make this stuff up.”

The 5: Well, it’s not exclusively a California thing… nor is it new. Whenever copper prices become elevated, all manner of copper items become subject to theft.

We chronicled a bunch of ’em over a decade ago — construction sites, manhole covers…

Our favorite is still the incident in Kansas City where thieves made off with copper tubing from a high-voltage TV transmitter. They knew what they were doing, too… since they weren’t fried by 35,000 volts of electricity or scalded by the coolant flowing through the tubing.

“Ray Blanco’s words yesterday kind of echoed my thoughts,” a reader writes on where things stand with the Omicron/Omigod variant.

“I’m the guy who wrote in a few weeks ago about my head hurting due to all the dishonesty surrounding COVID from the powers that be — essentially that there no longer is a narrative to push, but they’re pushing it anyway.

“Well, as fate would have it, I’m now a veteran of the OMG variant. At 72 years of age, I think I qualify as among the demographic that said powers say should be either dead, sicker than hell and lucky to be alive or groveling to the gubmint to save me. However, from my perspective, I just survived a pretty bad head cold with a cough thrown in.

“Those powers may just as well put their collective efforts at shutting down the world to prevent the spread of the common cold, and will have just as much success. Since I didn’t turn into a Nazi, I guess they must have some other disease.

“It does occur to me, though, that a potential benefit of all this might be one of the pharmas stumbling onto a cure for the common cold as they pursue an OMG cure, since there appears to be so little difference between the two.”

The 5: It’s amazing, the things you find coming from the White House and elite media now — stuff you can classify under “Now they tell us.”

Seeing as we’re picking on The New York Times today, get this passage addressing natural immunity without using the term… 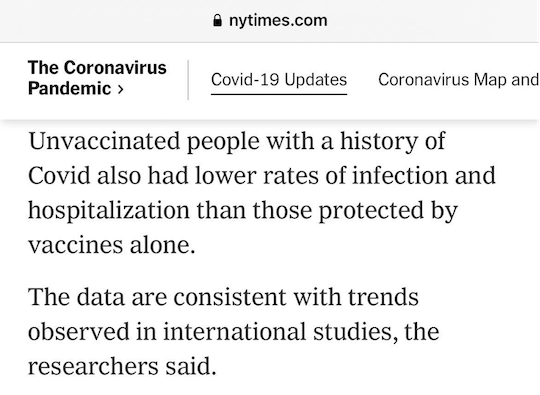 That’s based on new CDC research from two states during the worst of the Delta outbreak last year. From an Associated Press account: “By early October, compared with unvaccinated people who didn’t have a prior infection, case rates were… 29-fold lower in California and 15-fold lower in New York in those who had been infected but never vaccinated.”

We’re not harping on the vaccines per se as much as we’re marveling at how not so long ago, hypothesizing about this sort of thing could get you banned from social media…