Well, that was… interesting.

When we went to virtual press yesterday afternoon, the major U.S. stock averages had experienced a washout… and then they were gamely attempting a comeback.

By day’s end, those averages were shockingly in the green.

By any measure, it was extraordinary. In data going back 35 years, there’ve been only six days on which the Dow fell 3.25% or more intraday… but ended the day in positive territory.

According to figures from Bianco Research, two of those days came shortly after Black Monday in 1987… two more came during the financial crisis in 2008… one came amid the corona-crash in 2020… and then there was yesterday.

After the close yesterday, your editor was trading instant messages with Brian Maher of our sister e-letter The Daily Reckoning. What was my hot take, he asked? “Nothing is rational anymore,” was the most I could summon at that moment.

People who pay much closer attention to these matters than we do say that volumes in stock and index futures were preposterously thin yesterday — on par with a holiday weekend.

An interesting explanation… but less satisfying than this one. 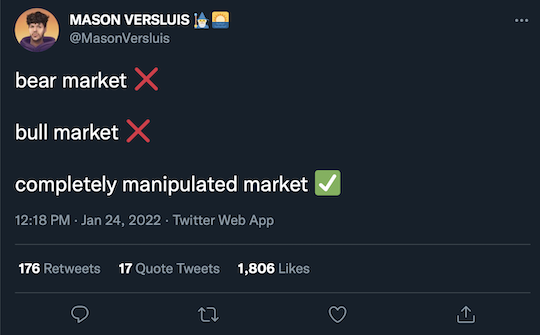 The mainstream, meanwhile, continues to zero in on fears over Federal Reserve policy. On a surface level, that makes sense: The Fed’s Open Market Committee begins two days of meetings today, setting the stage to start raising interest rates in another six weeks.

But will that amount to a “policy mistake”? The miserable flash PMI number yesterday points to a dramatically slowing economy. Will the Fed make the blunder of — as the saying goes — “tightening into weakness”?

If that’s what happens, the mainstream still has it wrong. It won’t be a mistake; it will be the plan.

Joe Biden is the first president since Jimmy Carter to say out loud that he expects the Fed to get inflation under control. And if that means the Fed no longer has the stock market’s back — as it has consistently going back its rescue measures after the 1987 crash — well, them’s the breaks.

What to do? Well, ignore Jim Cramer. Here he was yesterday…

And here he was minutes before the market opened on the first trading day of 2022.

Yeah, NFLX then proceeded to sink 15% going into its quarterly numbers last week — which positively soiled the bed. It’s now down 35% year to date.

Our point is not that you should panic — on the contrary, we’ll spy some bargains a little later on in our 5 Mins. today. Just remember, these guys and gals are primarily entertainers. Your financial well-being is the last thing on their minds.

Cryptocurrencies also rose from the dead yesterday — but unlike the stock averages, they’re still way below their 2021 highs.

We alluded yesterday to the developing mainstream narrative that stocks and crypto have begun moving in tandem. But until proven otherwise, that’s only correlation — not causation. In time, the correlation will break.

“Every industry evolves and money is no different,” says our crypto evangelist James Altucher. “Crypto solves many of the problems of the current financial system: fewer intermediaries (banks, Federal Reserve, payment processing companies, etc.), no room for human error, no forgery, no central control determining the value of money, etc.”

And it’s happening now even if you don’t realize it: “2021 was like a dream come true for crypto,” James continues. “Hundreds of millions in transactions now take place on crypto every day as opposed to near $0 back in 2018. DeFi and NFTs lead the pack with billions of dollars worth of transactions per year.”

As for 2022, this is the year it reaches mass adoption — “just like when the internet started to be used for real-world commerce in the mid-’90s rather than just being a big digital billboard for other people surfing the internet.”

[Confidential for experienced crypto investors: For an extremely limited time, we’re applying a credit to your account worth a minimum $512 toward membership in James’ elite circle of crypto readers — giving you full access to his premium crypto research. Details here.]

As for today’s action… well, the major indexes are sinking back into the red.

Bonds are also selling off, pushing yields higher. The 10-year is back to 1.76%.

In the commodity complex, crude is rebounding, up 1.7% and back within sight of $85. Gold’s steady climb continues — now within a couple bucks of $1,850. But silver’s latest foray past $24 didn’t stick.

“It almost sounds backward to say this, but value stocks are hot right now,” says our income specialist Zach Scheidt.

Last year, Zach was in the vanguard of analysts who noticed hot money “rotating” out of go-go growth names like Zoom and Roku… and into staid, boring value names that were good buys.

“Value stocks,” Zach reminds us, “are simply stocks that trade for a good value when compared with the earnings a company generates.

“So while many speculative growth stocks cost hundreds of times their potential profits (if they even have profits to show), value stocks are trading for just 15 times, 10 times or even single-digit times their annual profits.

“I think these companies will generate some hot returns in your account this year even if the companies themselves aren’t the sexiest concepts in the world.”

Here are three names Zach says are worth your consideration…

Still, it trades for only 12 times forward earnings. The dividend is minuscule, “but as the company’s profits ramp back up following the coronavirus crisis, I expect Ford’s dividend to increase as well.”

Summing up, “They may not be high-growth ‘exciting’ stocks like the ones that were popular at the beginning of last year,” says Zach.

“But the gains you can lock in from these value plays are every bit as valuable as profits you can make from speculative growth stocks. Plus, you can bag those profits while taking less risk!”

Energy is set to get more expensive thanks to… one of the president’s nominations to the Federal Reserve?

Sarah Bloom Raskin is the president’s choice to serve as vice chair for regulation at the Fed.

“This is not an honorary title,” says our macro maven Jim Rickards. “The vice chair for regulation is, in effect, the top financial regulator in the U.S.”

We came off impressed with Raskin last year while watching the surprisingly good PBS Frontline documentary “The Power of the Fed.” She might well put up some needed resistance to the corrupt culture of the too-big-to-fail banks — eager to haul in ginormous trading profits while foisting their risk onto the back of the American taxpayer.

But on the other side of the coin, “Raskin is a notorious climate alarmist and activist,” warns Jim.

“She wants to use the financial system to starve the oil and gas industry of funding and to allocate capital toward solar, wind turbine and other supposedly renewable sources of energy.”

That said, with a Senate deadlocked 50-50, Raskin’s confirmation is not guaranteed. Democrat Joe Manchin from the coal-intensive state of West Virginia will be a tough sell. To be continued…

In principle, we’re on board with the idea of NFTs. However, this seems to violate the principle… 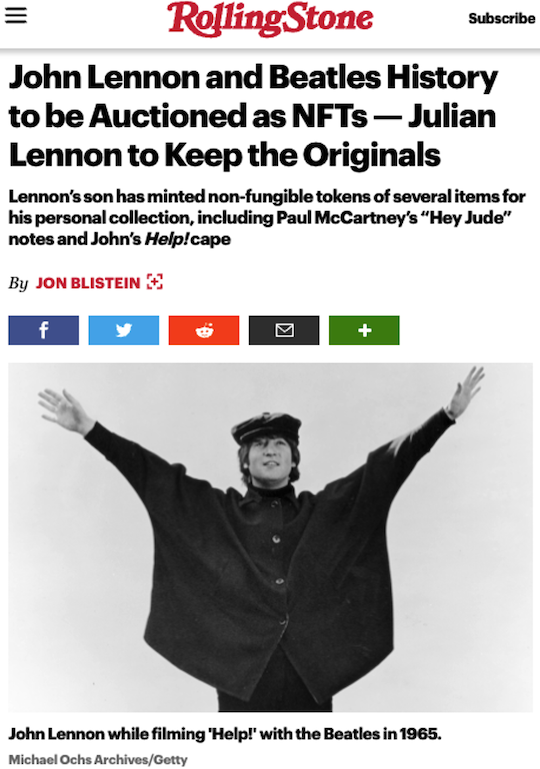 So yeah. Julian Lennon is going to auction off NFTs depicting Beatles memorabilia next month — while retaining the physical items for himself.

Among the digital representations up for grabs — the black cape John Lennon wore in Help! and handwritten notes for “Hey Jude.” Oh, and three Gibson guitars John gave to Julian.

“Each NFT will be offered as an audio-visual collectible,” reports the BBC, “with narration by Julian Lennon alongside imagery of the item.

“The NFT of notes hand-written by Paul McCartney for ‘Hey Jude’ is expected to fetch the most at auction. It has a starting price of $30,000, with expectations that bids could reach more than double that figure.”

Again, not the genuine articles but digital representations.

Yes, they’re one-of-a-kind digital issues but… well, to paraphrase Julian from “Valotte,” is he really so clever as he seems to think he is?

“Thanks for having my back,” a reader writes in the latest chapter of some back-and-forth in our mailbag.

“I will readily admit that I don’t have any scientific studies to back up my assumption that there likely is a pretty high correlation between anti-GMO’ers and pro-vaxxers. Rather, I’m simply relying on logic, which generally has been one of my strong suits.

“I might remind the individual who accused me of spreading ‘fake news’ that personal observations do not qualify as news, and that there always will be exceptions to any general rule.

“Such exceptions do not invalidate the general rule, however, which is the point you very nicely made.”

The 5: This peculiar dispute prompts us to plug a few keywords into Google (which we use more judiciously these days, but sometimes it’s still the most useful search engine).

The first thing that comes up is an article in TheIrish Times from last summer: “[T]he anti-GMO movement is now in decline as the EU and various influential environmental organizations begin to cautiously welcome selected genetically engineered organisms,” wrote William Reville, professor emeritus of biochemistry at University College Cork.

“The final nail in the anti-GMO coffin is likely to be the spectacular success of the genetic technology that has just developed several highly effective vaccines against COVID-19 within the miraculously short time frame of one year.”

Question the “spectacular success” if you like, but there’s your best snapshot into Establishment thinking on the connection…