“Inflation is roaring higher. Why isn’t the gold price jumping along with it?”

In many financial circles, that was the question of 2021 — and still is now.

For the last 15 months, gold has been mired between $1,700–1,900 an ounce. It’s right around the midpoint as we write this morning — which, as we said yesterday, is a critical juncture… 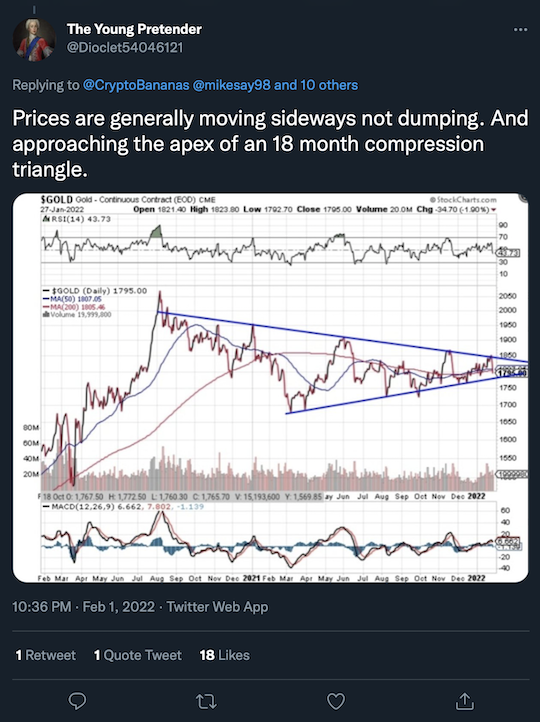 No, we’re not going to guess today which way it’s going to break.

In addition, for purposes of our discussion today, we’ll leave aside the matter of the gold price being manipulated. We don’t have much to say on the subject that we didn’t say 2½ years ago.

The consensus answer to the question with which we began is this: Cryptocurrencies are stealing the precious metals’ thunder. Bitcoin in particular has acquired a “store of value” role that it will retain even if it never becomes a commonly used medium of exchange.

Many people whose opinions we respect have latched onto this explanation: “Precious metals, they’ve got big competition in the digital space,” said Bianco Research president Jim Bianco during a recent YouTube roundtable.

We daresay a better explanation — with a little more history behind it — is this: Gold languishes when the stock market performs well. And vice versa.

True, it’s been only 50 years since “the dollar price of gold” became a changeable thing. But it’s enough time for us to draw some broad-brush conclusions.

We begin following the breadcrumbs in 1966 — the year the Dow industrials hit the 1,000 level for the first time. 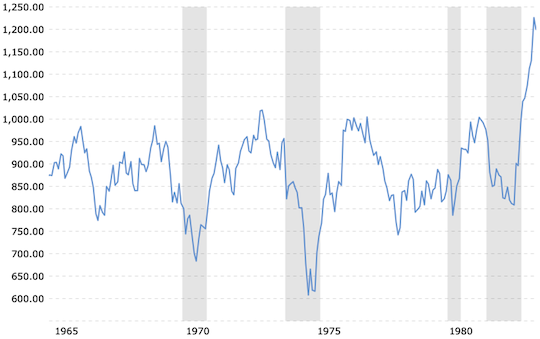 Now… If you know a little bit of monetary history, you know the gold price in the late ’60s was fixed at $35 an ounce under the Bretton Woods Agreement of 1944.

But savvy people around the world already suspected the United States would be unable to keep that $35 “peg” forever. They saw the massive spending for the Vietnam War and President Johnson’s Great Society programs… and they knew sooner or later, something would have to give.

And so stresses were already appearing in financial markets — stresses that suggested the real gold price was something more than $35. The failure of the “London Gold Pool” in March 1968 — a long story beyond the scope of our 5 Mins. today — was a warning light flashing bright red.

President Nixon’s decision to “close the gold window” in August 1971 was an acknowledgment that $35 gold was a fiction.

As stocks languished throughout the ’70s, gold was the go-to asset.

So we’re talking about a lengthy stretch of time when stocks went nowhere and gold soared. Then came the 1980s and ’90s — and a role reversal.

Meanwhile, the 2000s were another decade where stocks went more or less nowhere. Here, the high-water mark was 1,500 on the S&P 500. Yes, the index surpassed that level briefly in 2007… but it wasn’t until April 2013 that the old highs were left behind for good. 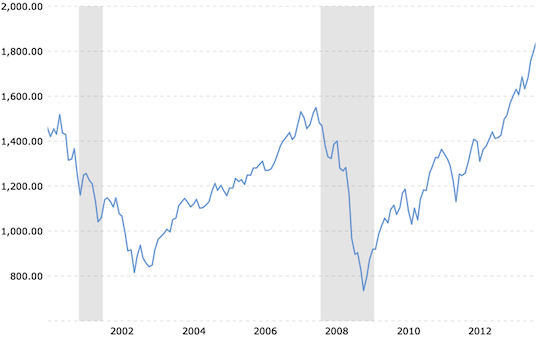 Now we’re starting to see a discernable pattern: Gold puts in a blowoff top roughly two years — give or take six months — before the stock market leaves behind its old highs forever.

Meanwhile, the stock market has climbed to one new high after another. The S&P 500 notched its most recent record close on the first trading day of 2022 — four points shy of 4,800.

Yes, we’re working with a somewhat limited data set… but we can tentatively conclude the start of the next bull market in gold will coincide with a long-term stock market top.

There’s been a lot of mainstream chatter in recent weeks that the top might be in, with one expert or another citing analogues between the present moment and the peak of the dot-com bubble 22 years ago.

Anecdotally, it was a little freaky to see Time name Elon Musk its Person of the Year in December — after naming Jeff Bezos at the end of 1999.

We won’t be so bold to declare the top is in — especially since our own stable of experts disagrees on that matter.

But we can declare with reasonable confidence that if the stock market is still stuck below its all-time highs a year from now… the time will be approaching to back up the truck and grab all the precious metals you can.

As for the markets today, stocks and gold are both inching higher.

Among the big movers is Google parent Alphabet — up 8.5% after huge “beats” on both earnings and revenue, as well as announcing plans for a 20-1 stock split.

That’s absolutely true, by the way: Per official disclosures, House Speaker Nancy Pelosi and her husband, Paul, loaded up on GOOGL call options in December worth between $500,000–1 million.

Crude is little moved at $87.90 after OPEC and other major oil-producing nations agreed to stick to their production plans — adding another 400,000 barrels per day come March.

The big economic number of the day is a shocking outlier. But it might also be meaningless.

It being the first Wednesday of the month, the payroll firm ADP is out with its estimate of new private-sector payrolls for January.

The consensus guess among Wall Street economists was for 225,000 jobs added. The actual number was 301,000 jobs lost. That’s a recession-level number.

About half the total came out of leisure and hospitality — which is not what you’d expect in January, when the bulk of layoffs are in retail.

To be sure, ADP’s predictive value for the monthly job numbers from the Bureau of Labor Statistics is… well, next to nil. But if ADP is onto something… the market’s in for a rude shock on Friday.

To the mailbag, where after a reader’s inquiry yesterday it seems many people are getting $50 bills instead of $20s when they go to the ATM nowadays.

“I live in northern Virginia and wanted to report that I have encountered the same thing with $50 bills being dispensed at ATMs,” writes one. “The higher the amount withdrawn, the more $50s you get.

“I too have found them far less convenient. This has only recently happened since COVID started. I have not found a good explanation or reason for the change.”

“Here in Rapid City, South Dakota,” writes another, “Wells Fargo has been doing it for about two years. My usual $300 withdrawal comes as four $50s and five $20s. I take the $50s back to the bank and trade them for $20s. Seems like a waste of everybody’s time.”

“More interesting to me,” says our Detroit-area reader, “is the fact that when I have tried to exchange $20s for $100s at a bank that I am not a member of they will not perform the transaction and at my own bank they need my ID in order to do so.

“Huh? I thought green for green. Why the tracking? I’ve resorted to going to local liquor stores for this type of exchange, which they happily perform.

“Love The 5, which I usually read early in the morning the day after it is published.”

The 5: Yeah, that’s been the case for a long time now in your editor’s experience. Again, it’s the anti-money laundering and know-your-customer regulations — which ultimately trace their origins to the war on drugs.

Which, come to think of it, began in earnest around the same time Nixon closed the gold window.

A reader from the Boston area concurs: “The ATMs here mostly dispense $20s. When I’ve gotten larger bills, usually from a direct withdrawal ($100s) I’ve always been able to use them at the self-checkouts in any store that has them.

“Which is almost all stores, sadly. Where do kids get part-time jobs these days?

“Thanks to the inflationary Fed, $50 is the new $20,” still another reader points out.

Going by the official inflation numbers, you need $739.91 today to have the same purchasing power as that single Benjamin in 1969.

But of course there’s a finite limit to the number of $100s you can stuff in a wallet. Still another dimension to the war on cash and making cash as unattractive as possible, no?

“Not interested in any politics on either side. Just wanted trading related ideas.”

The 5: We’re not interested in any politics on any side. But as our founding editor Addison Wiggin wrote here more than a decade ago, “Politics are the problem, and you ignore them at your peril.”

We weren’t even explicitly political yesterday, anyway. We teased out Biden administration policy for cryptocurrencies (uncertain) and cannabis (concerning)… and we briefly touched on social media censorship pertaining to the trucker convoy in Canada.

The censorship issue is profoundly relevant for reasons we hit on last August. Long before the internet came along, the financial newsletter business blazed trails in expressing ideas that make mainstream gatekeepers uncomfortable. And in the present moment, the online censorship model could easily be put to work freezing dissenters out of the financial system.

Oh, and the convoy: It’s starting to have an actual economic impact, so it’s right in our bailiwick. In addition to the big protest in Canada’s capital, Ottawa, there’s another one in Alberta near the Montana border.

Complains Alberta’s transportation minister, “Everyone has the right to protest peacefully, but our supply chain and the livelihoods of those trying to cross the border should not suffer because of that.”

Of course, that’s the point of the protest — inflicting a measure of economic pain to seek redress of grievances.

Sorry if bringing that up is triggering for you…