Sh*t is getting real in Canada… as Prime Minister Trudeau ratchets up his campaign against activist truckers occupying capital city Ottawa.

“Justin Trudeau has taken the unprecedented step of invoking the Emergencies Act to crack down on anti-vaccine mandate protests,” the BBC says.

According to Trudeau, this new course of action will be “time-limited… reasonable and proportionate.” Although he’s not calling in the military (yet), Trudeau says he’s giving police “more tools” to put the screws to protesters, including imprisonment and fines.

No need for a Tiananmen Square moment, right?

Nonetheless, one of our favorite independent journalists lists instances of government overreach… 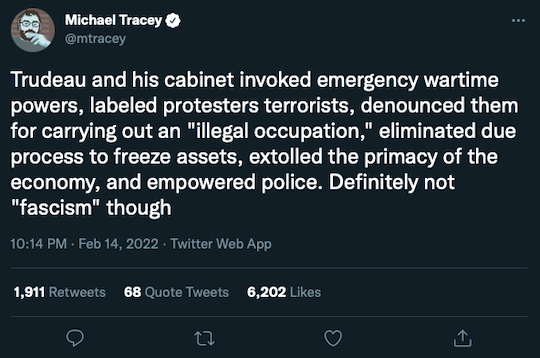 Yep, you read that correctly: “With no need for court orders” — under Trudeau’s emergency regime — “banks can freeze personal accounts of anyone linked with the protests,” the BBC says.

We addressed the potential for freezing people out of the financial system six months ago. And Canada is going the extra mile — even suspending demonstrators’ vehicle insurance! Thing is, this brand of economic warfare isn’t anything new, even (especially?) in the U.S…

Consider wildly popular podcaster Joe Rogan who’s been censured for voicing “misinformation” about COVID-19 by a group of 270 trolls who called on Spotify to muzzle Rogan. The U.S. surgeon general jumped on the bandwagon as did celebs, including Neil Young, Joni Mitchell and more.

In the interim, self-appointed censors have combed through episodes of The Joe Rogan Experience — Spotify’s No. 1 podcast — digging up more gotcha moments.

The endgame? Well, to de-platform Rogan, of course. But also to pressure advertisers to withhold ad money… which can run in the $1 million range for space on Rogan’s show. Per ad. (Thus far, Rogan’s advertisers have mostly stayed mum. They know where their bread is buttered.)

Accordingly: “Progressive nonprofits, large portions of the news media, woke corporations, Democrats in government — can collectively be called the ‘blue stack,’ which represents an enforcement mechanism for the ruling ideology to express hegemony over American democracy.

“Even America’s payment processors have joined the ranks of the stack,” Jilani notes. “If you find yourself too far astray from the ideas that the blue stack deems acceptable, GoFundMe might take you off their platform.”

An emergent example? “Donors who gave millions of dollars to support a nonviolent protest led by Canadian truckers were surprised to find that GoFundMe abruptly terminated the fundraiser,” he says, “earning praise from Canadian authorities, who are functionaries in their own closely related blue stack.”

By Mr. Jilani’s estimation: “The goal of cutting off heretics from financial resources extends far.” But freedom-loving citizens have found a way to end run the system…

“A crypto fundraiser for Canadian truckers… has pulled in over $900,000 in Bitcoin,” says Markets Insider. “It’s no wonder convoy organizers are turning to cryptocurrency like Bitcoin to generate funds because it’s decentralized,” CTV News remarks.

Although power-tripping Trudeau claims his Emergencies Act will clamp down on crypto… we’d like to see officialdom try. That crypto remains outside the traditional banking system and retains a level of anonymity — plus the fact stuffy elites just don’t get it — are values inherent to cryptocurrency.

Now more than ever, it’s crucial you understand how crypto can hedge your wealth and assets, particularly from government overreach. And our crypto experts James Altucher and Chris Campbell have written an easy-to-read manual that answers all your crypto questions. Considering the situation unfolding in Canada, what are you waiting for?

The Fed’s ominous-sounding “Meeting Under Expedited Procedures” yesterday went nowhere. Board members were divided on the best course of action to combat rampant inflation. At the end of the day, the final word is a rate hike come March.

Commodities? Oil’s down 3.6% to $92.06 for a barrel of WTI — perhaps because Russian-Ukraine tensions are easing, according to mainstream outlets. And precious metals are downshifting too: The Midas metal has lost $15.80 per ounce to $1,853.80 and silver’s hanging on to $23.

We have a couple of economic numbers to report today (spoiler: Neither is very good)…

According to the Bureau of Labor Statistics, the Producer Price Index (PPI) increased 1% in January, far exceeding the 0.5% consensus. Year over year? A very hot +9.7%. Just another indicator of out-of-control inflation… which means more pressure on companies to raise prices on goods and services.

And the Empire State Manufacturing Index showed marginal growth in February with a reading of 3.1 versus a negative 0.7 last month. “While a positive reading indicates growth in regional manufacturing activity,” RTTNews says, “economists had expected the index to show a more significant rebound to a positive 12.2.” Waaaay short of the mark then… 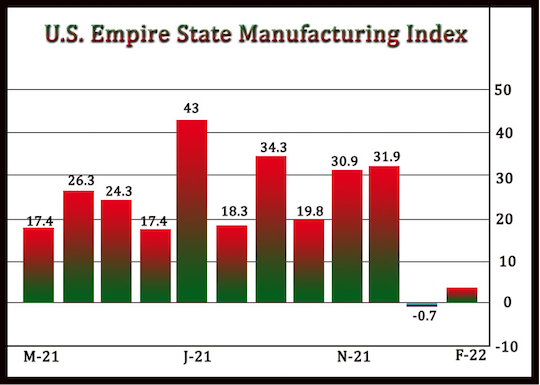 Emails reveal Ms. Chitra Ramkrishna, who resigned her position in 2016, shared insider information with an unnamed spiritual adviser — information including “business plans, board meeting agendas and financial projections,” according to the BBC.

The Securities and Exchange Board of India (SEBI), charged with investigating the matter, says the mysterious yogi was controlling India’s largest bourse or stock exchange with Ramkrishna acting as a pliant “puppet.”

(Granted, Ms. Ramkrishna calls the yogi a paramhansa, an enlightened being without a physical body… despite email evidence the two vacationed together in Seychelles in 2015.)

The SEBI says: “The sharing of financial and business plans of NSE… is a glaring, if not unimaginable, act that could shake the very foundations of the stock exchange.”

For her unorthodox practices, Ms. Ramkrishna was fined 30 million rupees ($396,726 at the current exchange rate); plus, she’s banned for three year from working for any Indian stock exchange or SEBI-registered affiliate.

No word yet on whether Ms. Ramkrishna will pay her fine in digital rupees…

Levi’s Brand President Jennifer Sey was ousted after she spoke out about pandemic-era public school shutdowns.

No, Ms. Sey is not your typical “MAGA mom” (she supported Elizabeth Warren’s bid for president, in fact) but she ismother to four children attending public schools in the San Francisco Bay Area.

And when she wrote Op-Eds and spoke to local news outlets about “draconian” COVID-19 school shutdowns, she got an earful from company execs, urging her to “pipe down,” according to Ms. Sey.

So after being called everything from a “racist” to a “conspiracy theorist,” Ms. Sey was invited to dinner with Levi’s CEO, who dangled a tantalizing carrot.

“I was told that I was on track to become the next CEO of Levi’s — the stock price had doubled under my leadership, and revenue had returned to pre-pandemic levels,” she says. “The only thing standing in my way… was me. All I had to do was stop talking about the school thing.”

Ms. Sey refused, and eventually she was shown the door, but not before she was offered a $1 million severance package… if only she would sign a nondisclosure agreement.

No word on whether Ms. Sey’s accounts have been frozen…

Dave surveyed your Olympic viewing habits yesterday, and our readers delivered! Our digital mailbag is absolutely bursting at the seams…

“We’ve been watching the Olympics on and off; not really paying attention to or tracking results closely,” says a longtime friend of The 5.

“We’re watching less this time around, partly because we’re not watching as much TV overall, but a lot due to the fact that they are simply less interesting to us. I personally think that NBC does not do as good a job as ABC used to do,” he says.

“Don’t like NBC or China,” says another. “Always watched before. Not this year.”

“We used to watch the Olympics in years past to see people of all walks excel in their sport of choice. This year, we’ve ignored them completely with the exception of watching a hometown kid compete in board cross.

“The primary reason is I don’t want my viewership to fund any part of the CCP. The secondary reason is I’m growing tired of hearing about every athlete’s sob story. Life is hard for lots of us. Glad you overcame, don’t need the backstory (especially with the latest woke twist). Sorry, not sorry…

“At no point in my life have I been afforded free luxury housing, perfectly nutrient-balanced food, top-notch coaching and physical therapy on someone else’s dime — all to compete and receive obnoxious endorsements from big corporations. Just compete FAIRLY and leave the BS out of it.”

A fifth reader weighs in: “Watching, but less than normal. Partly due to the China thing,” he says, “and partly to penalize the U.S. corporations pouring money into China.”

And finally today, a reader writes: “This is the first time ever that we refuse to watch any coverage of the Olympic games. Not one minute.

“It is a travesty that the U.S. or any free nation sent a delegation to China at all, between the damage inflicted on the world by the pandemic and the everyday atrocities perpetrated by the CCP… Not one minute.”

Personally, I’ve watched the Olympics sporadically. Unfortunately, most every time I tune in, the event is curling. No offense to curling fans, but I don’t get it. It’s about as scintillating as watching someone sweep the kitchen floor… Again, just my opinion.

You all take care; we’ll be back tomorrow!