“Americans: We can endure higher prices for food and gas if it means putting the screws to Putin. Consider it a patriotic donation in the fight for freedom over tyranny.”

So tweets George Takei, the fellow who played Sulu in the original Star Trek cast — and who presumably has a sufficient net worth to “endure higher prices for food and gas” without breaking a sweat.

For a third Monday in a row, we’re taking on the theme of “wartime sacrifice.”

Last week, amid heated rhetoric about “the fight for freedom over tyranny,” we wondered aloud…

But after the passage of another week, it’s torches-and-pitchforks time now.

Because it’s not just George Takei demanding sacrifice from us peasants.

It seems to be a running theme among our elites. For instance, CNN’s “senior political analyst” John Avlon. 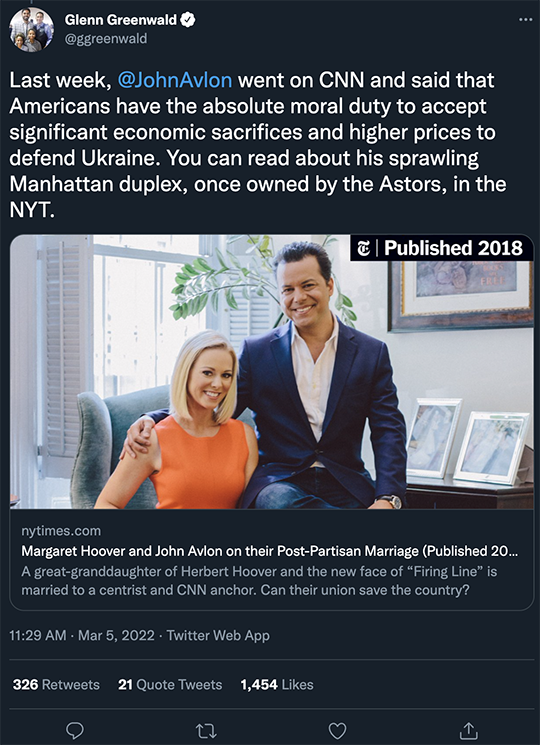 While other well-to-do warmongers swooned over Takei’s call for belt-tightening, folks in the real world furnished a reality check: “Currently accepting patriotic donations from wealthy celebrities to help me pay for the gas I need to get to my job,” said one.

Which reminds us of a meme we stumbled across… 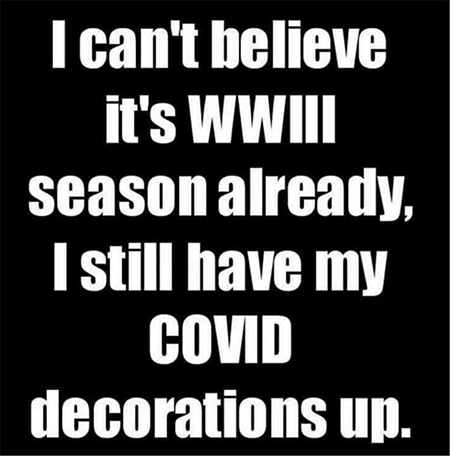 As the gods of comedic timing would have it, this social-media and class divide occurs at a time when oil prices have zoomed back to levels last seen in 2008. 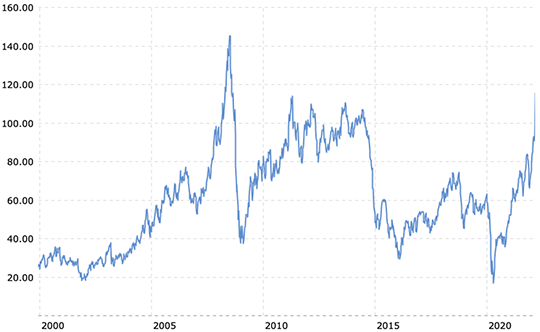 After the market’s close on Friday, the Biden administration started floating trial balloons about an embargo on Russian oil. This morning, a barrel of West Texas Intermediate is up another 3% to $119.25.

As it happens, the national average gasoline price crested the $4-a-gallon mark this weekend. The July 2008 record was $4.11.

Adjusted for inflation, that record is the equivalent of $5.18 now. So there’s still a way to go before we reach the extreme pain point that helped tip the global economy into near-collapse 14 years ago. Yay?

But how convenient all of this is for the White House…

Yes. All the inflation of the last year? It can be palmed off onto Putin now. Ditto for any new (and inevitable) supply-chain snags. None of it has anything to do with the second-order effects of lockdowns and money-printing anymore. History began on Feb. 24, 2022, and if you suggest anything to the contrary, you’re a deplorable Putin-loving seditionist. Don’t you know there’s a war going on?

Meanwhile, the NATO alliance and Russia keep slip-sliding toward nuclear confrontation — with the same well-to-do elites leading the charge.

In another weekend trial balloon, the White House floated the notion that Poland — a NATO member since the late 1990s — would ship some of its fighter jets to Ukraine.

“If Biden believes Putin won’t view that as a NATO attack, he’s dumber or more senile than I thought,” tweets our own Jim Rickards. “I’ve studied nuclear war theory since the 1960s. It’s all about escalation.”

As you might be aware, Ukraine’s leaders are demanding NATO impose a “no-fly zone” over their country. The White House and NATO have resisted this idea, specifically because it would amount to escalation — and a direct confrontation between NATO and Russia.

But if you’re an elite White House aide who honed the art of legalese at a white-shoe law firm, maybe you think, “Hey, shipping Polish jets to Ukraine would be a cool way to amp up the pressure without actually bringing NATO and Russia into conflict. It’s not really escalation toward nukes.”

Yeah, tell that to Putin.

➢ Tell it to the Poles, too. Knowing it would mean certain confrontation between their nation and Russia, several Polish officials have issued public statements amounting to: “Huh? News to us…”

Here too, we sense a class divide at work — a conceit that the Russian bear can be poked indefinitely without any risk the conflict will go nuclear… 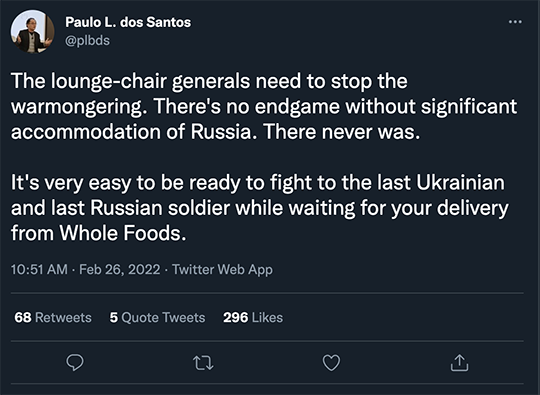 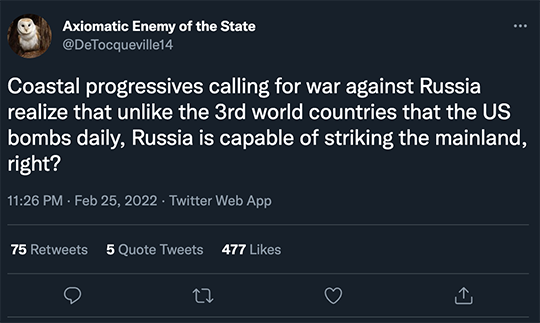 And once it does go nuclear, we can imagine the elites in their bunkers thinking: Well, yeah, it’s too bad tens of millions of Americans glow in the dark now. But Putin sure got owned, so it was totally worth it!

Now there’s wartime sacrifice for you.

We can’t help wondering, as we did last week, about the complacent attitude toward the prospect of nuclear warfare. Your editor well remembers the nuclear fright of the early ’80s that inspired a powerful movement for disarmament. But the Cuban Missile Crisis? Before my time.

The question today is addressed to you, if you’re old enough to remember that October in 1962. How does the vibe now compare with then? Better? Worse? The same?

Write us with your reflections: feedback@5minforecast.com. No, it’s not a strictly financial topic… but as we say now and then, no one will much care about the markets or the economy once nukes start to fly.

As for the markets today, they’re just downright weird.

Treasuries aren’t benefiting from the flight to safety, either: Prices are down, pushing yields up — the 10-year approaching 1.77%.

“We all see what’s going on with oil, gold, euros and rates,” he tweeted last night. “Here’s what you don’t see. Someone is on the wrong side of every one of those trades. They’re losing billions. This results in the failure of hedge funds and banks.

“Takes about a week for bodies to float to the surface.”

With that in mind, Jim is hosting a special Countdown to Crisis event one week from today. Attendance will be limited, but you can secure access to this urgent briefing starting on Thursday. Watch this space…

The guy who warned about a huge shortfall in global food production before a land war broke out in Europe is beyond alarmed now.

It was four months ago we noted the CEO of the Norwegian fertilizer giant Yara International was warning of a “food crisis” — as already-rising energy prices resulted in the price of fertilizer more or less tripling.

Now? “Things are changing by the hour,” Yara CEO Svein Tore Holsether tells the BBC. “We were already in a difficult situation before the war… and now it’s additional disruption to the supply chains and we’re getting close to the most important part of this season for the Northern Hemisphere, where a lot of fertilizer needs to move on and that will quite likely be impacted.”

In addition to the natural gas that makes ammonia, Russia also produces huge quantities of other fertilizer ingredients like potash and phosphate.

“Half the world’s population gets food as a result of fertilizers… and if that’s removed from the field for some crops, [the yield] will drop by 50%.”

From the sublime to the ridiculous, here’s a 5 Min. follow-up: Stolichnaya vodka hopes to distance itself further from its Russian roots and is rebranding as Stoli.

As mentioned here on Friday, the current freedom-fries atmosphere is resulting in anything remotely Russia-adjacent being “canceled” — including Stolichnaya.

Fact is, the brand’s founder Yuri Shefler has been exiled from Russia for nearly the entire 22 years Putin’s been in power. He hopes the name change will “accurately represent Stoli’s roots in Latvia.

“More than anything,” he adds, “I wish for ‘Stoli’ to represent peace in Europe and solidarity with Ukraine.”

We wish Mr. Shefler well. But the fact of the matter is that the current virtue-signaling craze is victimizing all manner of Putin’s opponents. For instance, this Russian streamer who vocally criticizes the war… 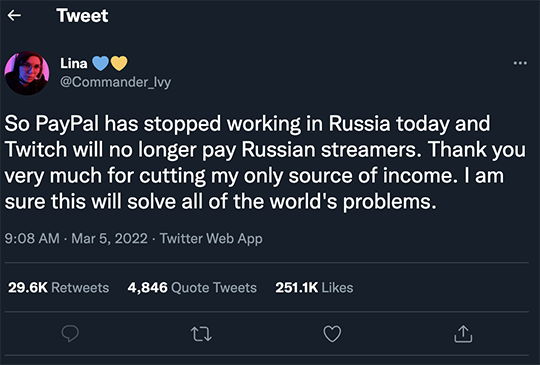 Well, that can only accelerate the move to crypto. More about that tomorrow…

We return to the topic of wartime sacrifice in our virtual mailbag: “I am a veteran of Operation Iraqi Freedom (’05–’06). It boggles my mind at the logic of some people when it comes to war — like your reader who said basically, ‘Let’s sacrifice by walking or riding a bike to win a war…’

“WTF!?!? The sacrifices to the gods of war are your sons and daughters! Or most likely for this person… other people’s kids.

“In this case it could easily escalate to global annihilation with nukes!

“I fully admit that I was caught up in the drumbeat for war after 9/11. I was a young 2LT ready to ‘defend democracy.’ However, having seen with my own eyes what a waste of lives and trillions of dollars that was, I am much more skeptical of any talk by our government about going to war these days.

“What benefit does the U.S. gain by getting involved in a hot war in Ukraine? Sure it makes Raytheon and politicians more money but serves no national interest, in my opinion. Recommended reading for The 5 readers to illustrate the point… War Is a Racket by Smedley Butler.

“The West has consistently poked ‘the bear’ and is now shocked that they got bit!

“War is the health of the state…

Imagine this — a Wall Street Journal writer who’s “so spot-on that he must be channeling Jim Rickards!” a reader enthuses.

“Probably the most important and poignant article I’ve read on the worldwide implications of Western elites’ bid to tank Russia’s economy. Set aside everything for a few minutes and read this. Spoiler alert: This WSJ article makes a strong case for gold.”

The 5: We noticed it too. Definitely not your usual fare, especially for the much-followed “Heard on the Street” column.

Discussing Washington’s move to freeze the Russian central bank’s reserves, Jon Sindreu writes: “Barring gold, these assets are someone else’s liability — someone who can just decide they are worth nothing.”

And rest assured, central bankers in other nations are taking note. But Sindreu can’t quite bring himself to reach the logical conclusion: The end result could easily be another near-death experience for the dollar like 1979 — only this time, the Federal Reserve’s paddles won’t revive the patient.

P.S. On the heels of our recommendation last week to watch Professor John Mearsheimer’s 2015 lecture Why Is Ukraine the West’s Fault?… we see a movement afoot to get him “canceled” at the University of Chicago.

In a letter addressed to UofC president Paul Alivisatos, a student group says it believes Mearsheimer’s “actions to be extremely detrimental for our country.”

Strictly speaking, they’re not calling for his firing, but they are demanding the university pressure him to “clarify” his views — which in the present environment can only mean to “renounce” them if he wants to retain his position.