Banning all imports of Russian oil and gas,” was the gist of President Biden’s press conference late this morning. (At the same time, Biden said he understands not all EU partners are in a position to do the same.)

“Causing significant damage to Russia’s economy” was the name of the game, including collapsing the ruble and “choking off” access to technology. And yes, wartime sacrifice was encouraged as Biden urged Americans “to do our part.”

I mean, the presser could have been a game of “Biden Bingo”: Weaning off Russian oil… Running on clean energy… Supporting Ukraine against tyranny… All win a square! 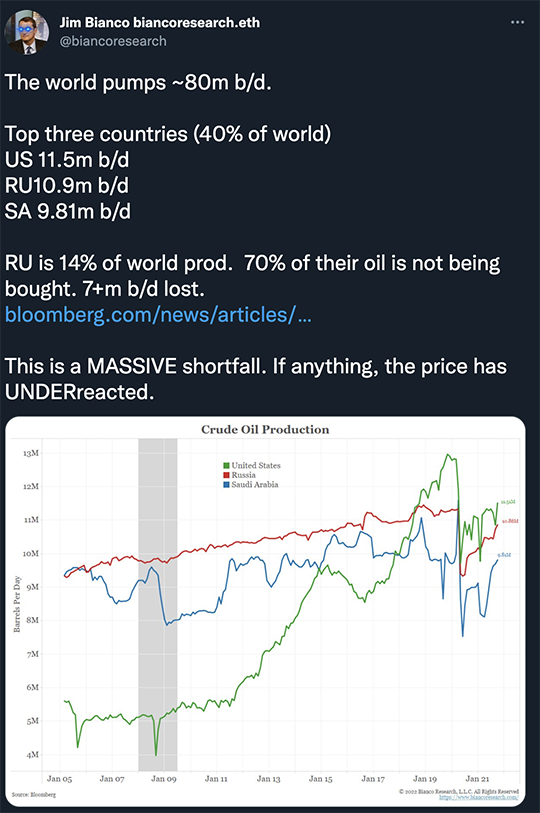 According to AAA, the average price for a gallon of gas in the U.S. is currently $4.17 — the most expensive in American history. “The price has under-reacted”?

Then there’s this heckuva straw in the wind… 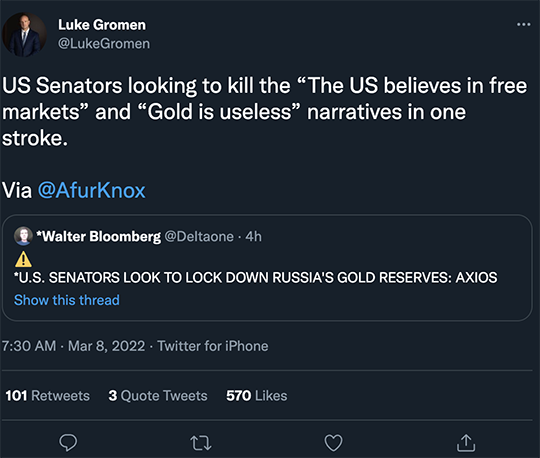 A bipartisan group of senators introduced the Stop Russian Government and Oligarchs from Limiting Democracy (Stop Russian GOLD) Act to prevent the Bank of Russia liquidating its sizable gold stockpile. In turn, the bill would prevent any American from buying or selling (electronically or otherwise) Russian gold.

According to one of the bill’s sponsors, Sen. Angus King (I-Maine): “Russia’s massive gold supply is one of the few remaining assets that Putin can use to keep his country’s economy from falling even further. By sanctioning these reserves, we can further isolate Russia from the world’s economy…”

Escalating sanctions… Or escalating toward nuclear war? (More on that down-issue.)

In a recent Wiggin Sessions interview, our founding editor Addison Wiggin has an extended conversation about the new “digital gold” with multimillionaire crypto investor James Altucher.

Addison says: “I want to talk about cryptocurrencies in the context of a wartime economy.”

“Even under normal circumstances, crypto avoids all these issues,” he says. “But now we have this extra risk…

“The day Russia invaded Ukraine, crypto fell like 10% or 11%. When you don’t know how markets are going to react,” he concedes, “the first instinct is to pull your money out of all the markets. So what we saw was the stock market went down. At first, crypto was being swept up in the uncertainty… Just everybody was going to cash.”

But returning to the “ultimate backup” theme, James reminds Addison: “You and I started talking about crypto in mid-2017, and we thought of it then as a great idea because it’s the evolution of money. But there weren’t a lot of users, and that was a big problem. So it really did feel a little more speculative.”

By 2021? “There were hundreds of millions of dollars of transactions per day…

“Now in 2022,” James says, “what I expect we’ll start seeing — not just millions of transactions happening — but real-world use cases.

Finally, in terms of Ukraine’s wartime economy, James mentions: “How do you get money to support your cause? I was recently at a big human rights conference, organized in part by Garry Kasparov — former world chess champion now turned human rights activist. And maybe half the discussions were about how crypto can better be used to fund social activism.”

Or even fund a war effort, as evidenced by Ukraine’s president fundraising digital assets — including Bitcoin, Ethereum and NFTs — via social media.

“So as a way to protect yourself,” James concludes, “you have to start thinking about crypto. We could predict prices, but with more and more uses for crypto, the sky’s the limit.”

For the major economic number of the day, the NFIB Small Business Optimism Index dropped in February to 95.7 — down 1.4 points from January. “Twenty-six percent of owners reported that inflation was their single most important problem in operating their business,” the NFIB says, “the highest reading since the third quarter of 1981.”

For more on gold…

As of March 1, 2022, the World Gold Council estimated Russia holds 2,298.5 metric tonnes. But those figures are intentionally opaque, according to our macro expert Jim Rickards.

“Noted analyst Simon Mikhailovich said… Russia has as much as 14,000 metric tons of gold, and China could have perhaps 40,000 metric tonnes,” Jim says while respectfully disagreeing.

“[One] source of confusion is the difference between the amount of official gold held either by a central bank or a ministry of finance and amounts that might be held by sovereign wealth funds controlled by the same governments.

“For example, China’s central bank reports… 1,948.3 tonnes… but they have a state-controlled wealth fund called the State Administration of Foreign Exchange (SAFE), which is completely opaque.

“Russia also has a sovereign wealth fund,” he says, “but they are much more transparent.”

Jim’s estimate? “Russia has moved over 20% of its reserves into physical gold bullion stored in Moscow in anticipation of freezes on digital payments.

“This gold bullion is worth about $140 billion at current market prices,” Jim says. “Because the gold is physical, not digital, it cannot be hacked, frozen or seized.”

And because Russia has been amassing gold bullion — the U.S. Senate’s best efforts notwithstanding — Jim says it’ll provide a buffer against worldwide financial sanctions. And he believes everyday investors should buffer their portfolios similarly.

“I recommend having at least 10% of your portfolio in physical gold and silver,” he reminds. “With gold prices rising due to volatility and war tensions, I would suggest getting your allocation now.” Plus, with the Fed meeting next week, there’s no telling how gold will skyrocket.

[A reader recently vouched for Jim’s acumen: “Thanks for Jim Rickards’ war update a couple of weeks ago,” he says. “Gold, metal miners and energy stocks — spot on and super informative!” Now Jim’s refining a novel strategy to prepare for a new crisis era… Stay tuned.]

“Yes, I remember the Cuban Missile Crisis,” says a reader responding to Dave’s query yesterday. “How quickly we forgot…

“I was 12 years old, and my dad was a Marine colonel, so the impact was immediate and hit close to home. But what so many seem to forget is what caused the crisis: The U.S. installing missiles in Turkey!

“Seems we have been ‘poking the bear’ for a very long time now and have learned nothing.”

“As the morons in Washington bang the drums of war, the military-industrial complex shouts, ‘Bring it on,’ willing to sacrifice YOUR children, grandchildren and great-grandchildren. Reflection: What has been learned over the past 60 years? ABSOLUTELY NOTHING!”

And a reader succinctly surmises: “Putin has the whole world over a barrel.”

Speaking of Putin, a reader notes: “Having just finished a book on the history of the KGB, those folks take this conflict to heart and have enough fanatical elements at play to cause some real harm. They are delusional at best and psychopaths at worst. Let’s not tweak anyone’s nose too far out of shape.”

A longtime reader says: “I was only 10 in October ’62. My dad was a B-52 pilot and we lived on a SAC base in North Dakota — a state which, due to its Minuteman silos, stood alone as the world’s fourth-largest nuclear power.

“I think that the vibe is much worse today because so many of the world’s movers and shakers are simply unable to imagine (or are in denial of) the destruction that would ensue from an all-out nuclear war.

“At least in the ’60s, the leaders of the U.S. and the Soviet Union weren’t senile and/or sociopathic.”

“As a family, we watched President Kennedy’s television address about the missiles on their way to Cuba. I recall telling my parents that I didn’t need to do my homework that night as we would all be dead soon. I was sent to my room… with the warning to do my homework.”

Another reader says: “We lived in San Diego, where my dad worked at Convair Astronautics, which built the Atlas intercontinental ballistic missile (ICBM). The Cuban threat was taken very seriously in San Diego. We had daily bomb drills in middle school, and our neighbors were digging a fallout shelter in their backyard.”

More feedback? “I was young and living in Australia in 1962, but I still remember the fear… My impression is that the world was safer then as both sides still had vivid memories of WW2 and, ultimately, didn’t want to go there.”

“I don’t remember the Cuban Missile Crisis, but like Dave, I remember the early 1980s,” writes another contributor. “All through high school, we felt as if we had a 50/50 chance of nuclear annihilation.

“I currently feel like we have never been closer to nuclear war. Although I discuss politics with my adult daughter often, I won’t tell her how I feel because I don’t want her to worry about what we can’t change.”

Like our last reader, your editor today wasn’t around for the Cuban Missile Crisis — I was in elementary school in the early 1980s. My introduction to the Cold War? Sting’s 1985 song “Russians” (which seems on-brand for someone from the MTV generation).

Here’s a lyric that still rings true: “There is no monopoly on common sense/on either side of the political fence.” Yes… and God, let’s hope the Russians — and Americans — love their children too.