Russians’ Last Safe Haven (Yours Too?)

“To a great extent, the Russian economy has been cut out of the global economy,” says our macro authority Jim Rickards.

“The U.S. and its allies in the EU and others around the world have imposed the harshest economic sanctions on Russia that have ever been used,” he says, “ including the SWIFT global financial telecommunications system.”

Then there’s the list of “Russian banks, oligarchs and major companies” that can no longer conduct business with Western parties. In no particular order…

“Biden has also prohibited exports of semiconductors, high-tech equipment and other technology to Russia,” Jim notes.

In total: “We should expect a decline in Russia’s GDP on the order of 25% in the first half of 2022,” he says. “And even when the kinetic war is over, probably in a month or so, the economic war will continue and the effects on the global economy (not just Russia) will last for decades.

“Russia is not a punching bag,” Jim notes. “They’ll fight the sanctions both with retaliatory measures of their own and with inventive workarounds designed to defeat the sanctions.

“Russia has implemented capital controls that will shift the pain of sanctions from Russian borrowers to Western lenders who will now suffer defaults on the Russian bonds they own,” he continues.

“And Russia has announced that it will cut off exports of important chemicals, metals and processed gasses to the West. These exports are indispensable to Western manufacturing processes including semiconductors, automobiles and agriculture.

“Russia may be the first victim of sanctions, but it won’t be the last,” Jim warns. “The Biden administration will find out the hard way that in a globalized, densely-connected world, what happens in Russia doesn’t stay in Russia.”

There’s a worldwide upsurge in demand for precious metals.

And in New York, CEO Gene Furman of Empire Gold Buyers says about one-third of his customers – who trade luxury items including watches and jewelry – skip the cash in favor of bullion.

Gregor Gregersen of Silver Bullion in Singapore reports gold and silver sales rocketed 235% in the week after Russia invaded Ukraine.

As for your average Russian citizen: “Since the country’s attack on Ukraine spurred widespread economic sanctions and the subsequent collapse of the ruble — which is now worth less than a penny,” says Business Insider, “gold has become one of Russians’ last safe havens to preserve their wealth.”

So much so that…

Russia’s central bank suspended gold buying earlier this week – with no word when buying might resume.

“Crises vary by type and location,” Jim Rickards cautions, “but they all have one thing in common – those prepared in advance have the best chance of survival.

“That’s why I strongly recommend that you own physical gold and silver during these volatile times – while you can still get a good price. I also recommend you get yours from Hard Assets Alliance.”

Oil too is up about 1% to $104.20 for a barrel of West Texas Intermediate. And talk about an unmitigated disaster in the making… 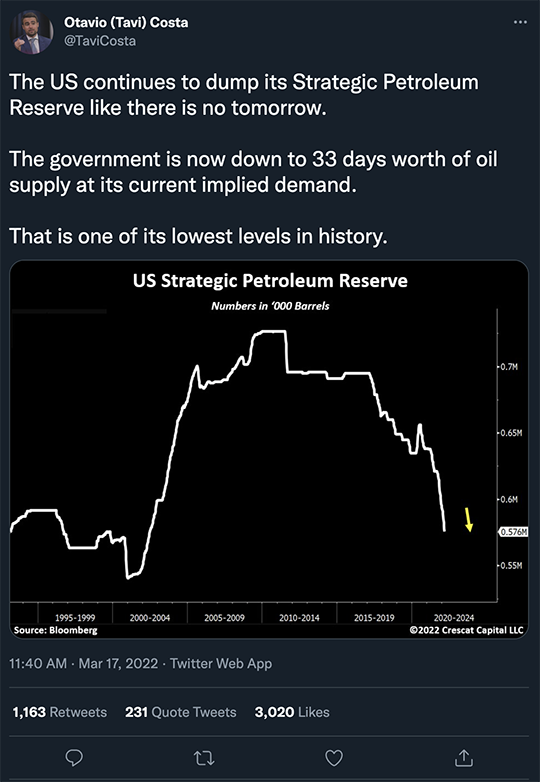 To wit, hedge fund manager Pierre Andurand tells Bloomberg oil prices could leap to a record high of $200 per barrel by the end of 2022.

And in terms of the 4 million Russian barrels per day that have been taken off the market due to sanctions, Andurand says: “I don’t think that suddenly they stop fighting, the oil comes back. It’s not going to be the case.

“We’ll have to live with higher prices to keep demand down,” he continues, “for it to be treated a bit more as a luxury product and also to accelerate the energy transition.” Umm… Climate change agenda much?

And PRICE CONTROLS and LOCKDOWNS too? “That’s also assuming there’s no government mandate and some kind of confinement, where let’s say two days a month, we are not doing anything,” Andurand concludes.

“That’s often why markets seem to move in the opposite direction you might imagine. Because profits are made in anticipation of an event. Then when the event actually happens, traders move on to another opportunity.

“What do you really need to know about oil stocks, in particular? Even though short-term traders are taking energy profits off the table, the bull market for oil may just be getting started…

“We’ve still got a global economy that is recovering from the coronavirus crisis,” Zach says. “It’s going to take months — if not years — for global oil production to catch up with rising demand.

And inventories for oil, natural gas, gasoline, jet fuel and other energy products are extremely low.

“All of these dynamics point to a strong backdrop for oil stocks for years to come.

“If you’re not invested in energy stocks, this week’s pullback offers a great opportunity to get in at a reasonable price,” says Zach.

“While there are many different kinds of energy companies you can invest in, there are four categories I’d like you to keep in mind…

“If you spend some time looking up the best stocks in each of these areas,” says Zach, “you’ll set yourself up to profit from the strong energy market.

“Finally, if you put a small portion of your retirement savings into each of these areas, you’ll wind up with a balanced basket of energy stocks that should do very well over the next several months.”

The restaurant has become the target of social media trolls and even old-fashioned telephone harassment as a result of the eatery’s name. “Some callers have demanded that Russian Tea Time close, while others have threatened the business for using the word ‘Russian’ in its name,” the Chicago Tribune reports. 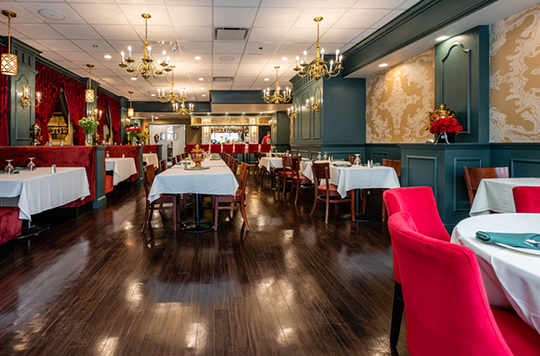 “Yet the Chicago restaurant’s owners say the fallout has been particularly hurtful because their business was actually founded by a Ukrainian chef, and many current employees also hail from Ukraine.”

“It’s misguided anger,” says founder and minority stakeholder Vadim Muchnik, who opened the restaurant with his mother in 1993. “I’m scared for the restaurant and for my colleagues. I don’t want them to be attacked in any way.

On the inflation watch, we see Doritos has become subject to “shrinkflation.” According to Frito-Lay, a 9.75-ounce bag of Doritos will now contain five fewer chips, shrinking the bag to 9.25 ounces… but cost nacho chip consumers the same price. 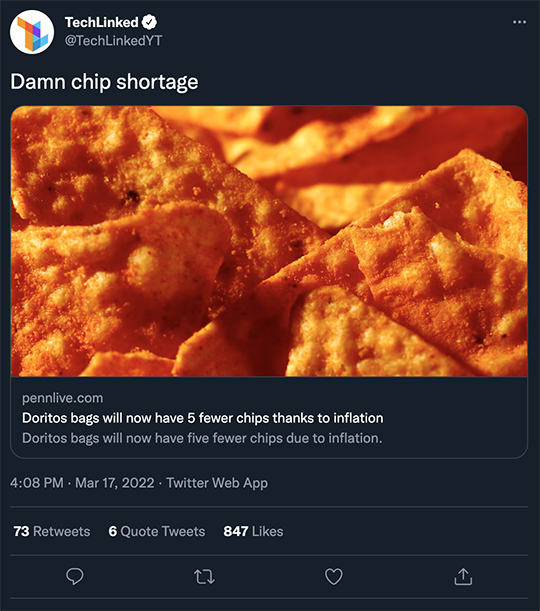 “Inflation is hitting everyone,” says a Frito-Lay rep. “We took just a little bit out of the bag so we can give you the same price and you can keep enjoying your chips.”

Per “the withdrawal of Sarah Bloom Raskin’s nomination at the Fed,” a reader comments: “As a resident of Maryland’s 8th Congressional District I am ‘represented’ in Congress by her husband, Jamie Raskin.

“From my experience and observation they are truly a compatible couple. As Forrest Gump would say: ‘That’s all I have to say about that.’”

And a reader doesn’t hold back: “I despise DST,” he says.

“If you want to get up earlier during the summer, nobody is stopping you. You can even get up with the sun every day, if that’s your thing. If a company wants to shift its business hours to 7 a.m.–4 p.m., that’s fine.

“But to coerce everyone by making the clock wrong is totally insane. (Which, I suppose, is one purpose of government. And the bigger the government, the more insane. RIP P.J. O’Rourke.)

“When I look at the sun in the sky, I can tell what time it really is. The idiots in D.C. apparently cannot.”

A map created by Google engineer Stefano Maggiolo “highlights the huge differences between solar time and clock time in large parts of our planet,” says an article at the Daily Mail. “This is because of the latitude and Earth’s tilt as it moves around the sun causing solar days to vary throughout the year.”

For our purposes, we’ll concentrate on North America and its environs… 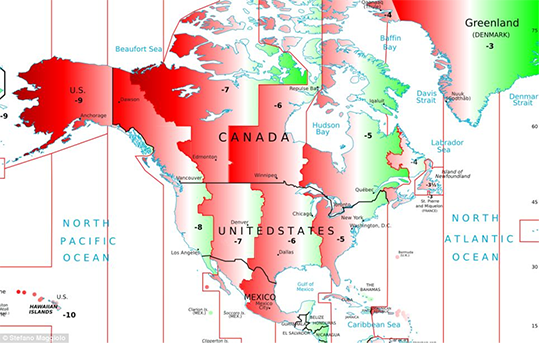 “This map shows the difference between ‘clock time’ and ‘solar time.’ The ‘late’ places are shown in red, the ‘early’ places in green. The deeper the shade, the more out of sync time is,” the article notes.

“The modern calendar compensates by letting midday oscillate a bit around the year,” Mr. Maggiolo explains. Meaning, midday in Naples, for instance, can go from 11:47 in November to 12:17 in February.

“The change from solar time, where all days have different lengths… came about due to the increase in mechanical clocks in the 19th century,” The Daily Mail says. Add to that: “The development of rapid railway systems and the consequent confusion of schedules that used scores of different local times led to the introduction of time zones as we know them.”

“I know what you mean,” a reader responds. “I lived for many years on the eastern edge of the Central time zone.

“The term HIGH NOON no longer has meaning,” says our final contributor today.

“We’ll have to change the movie title to High One O’Clock. Gary Cooper is rolling in his grave.”

With that, we hope the sun shines on you this weekend… We’ll be back with more of The 5 on Monday.