“My guess is that a false-flag event blamed on Russia is likely in the next week or so,” writes Ray McGovern — who was the CIA’s top Soviet analyst in the 1970s and ’80s.

The new week begins with the stock market about 7.3% below its all-time highs notched at the start of the year. “Levels of Fear in Markets Start to Return to Normal,” says a Financial Times headline — citing volatility as measured by the VIX.

Alas, a swift end is not in sight. Escalation seems more likely. Which brings us back to Mr. McGovern’s educated guess.

He suffered through NBC’s Meet the Press yesterday, where Chuck Todd repeatedly pressed NATO Secretary General Jens Stoltenberg about the likelihood of a Russian chemical weapons attack and the hypothetical Western response. Typical question: “Is a no-fly zone forever off the table or would the use of chemical weapons make NATO rethink?”

Corporate media — and many politicians both Democrat and Republican — are itching for Washington and NATO to impose a no-fly zone over Ukraine.

The problem is they never explain to everyday folks what a no-fly zone actually means: “Close the sky” is a lovely slogan — until you tell people that it would entail shooting down Russian jets and perhaps full-on war between the two nuclear-armed superpowers… 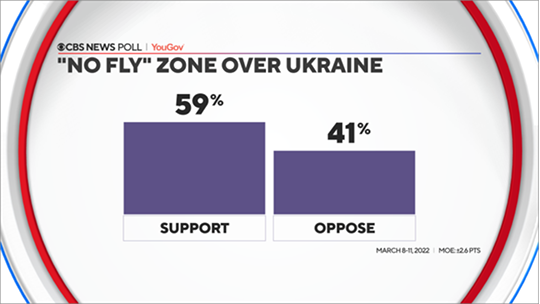 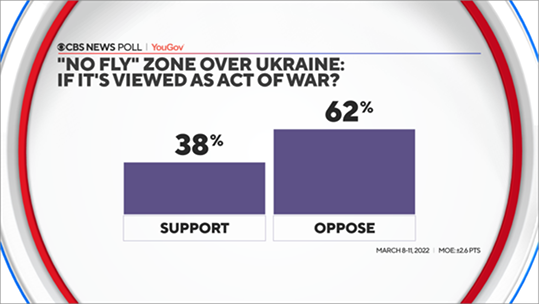 Thus, the drum-banging about a chemical weapons attack — it’s about overcoming those qualms and ginning up support for a no-fly zone.

To wit, this act of journalistic malpractice committed last week by one of the leading business news outlets… 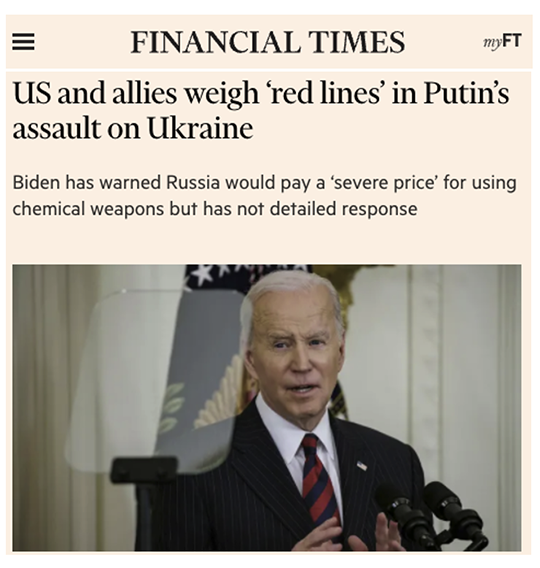 The background: On Aug. 21, 2013, as civil war raged in Syria, a sarin gas attack near the capital Damascus killed hundreds.

The global elite immediately pinned the blame on the regime of Bashar al-Assad. A year earlier, President Obama had said if Assad were to use chemical weapons, that would cross a “red line for us.”

Six days after the attack, Vice President Biden delivered a speech: “There is no doubt who is responsible for this heinous use of chemical weapons attack in Syria: the Syrian regime.”

“But within weeks,” says the current FT story, “the promise of a Western military intervention to punish the regime for crossing what seemed to be a red line for Washington had vanished, after Obama and key allies got cold feet about using force.

”Their failure to act is widely seen as having emboldened President Bashar al-Assad, helping him retain power and continue to wage a bloody civil war.

“The memory of that moment now looms as a specter over Biden and other Western leaders as they face the thorny question of how they would respond to further escalation by Russia in its war against Ukraine.”

Here’s the reality that doesn’t fit the mainstream narrative pushed by the FT.

The attack was in all likelihood a false flag. The intrepid reporter Seymour Hersh, of My Lai and Abu Ghraib fame, uncovered compelling evidence that traced the sarin back to Turkish intelligence, which acted in concert with jihadis linked to al-Qaida. Both Turkey and al-Qaida stood to gain if Western powers toppled Assad.

On Aug. 31, 2013 — four days after Biden’s speech — Obama had a long talk with Gen. Martin Dempsey, chairman of the Joint Chiefs of Staff. Seems the military was suspicious about the quality of the intel linking the attack to Assad… and leery about the endgame of Syrian regime change.

Obama then strode before the cameras and said, “The chairman has indicated to me that our capacity to execute this mission is not time-sensitive; it will be effective tomorrow, or next week or one month from now.”

Suddenly the urgency had fizzled. A few days later, Russian President Vladimir Putin pulled Obama’s chestnuts even further away from the flame — brokering a deal under which Assad surrendered all of the Syrian government’s chemical weapons.

Back to the present: Any escalation of the war from here will render moot whatever comes out of the “summit” between the Biden administration and corporate chieftains today.

We can’t help wondering if the elephant in the room will be the increasing dysfunction in the futures markets — which, as we mentioned last week, the mainstream is finally waking up to.

“Prices of materials like crude, gas, wheat and metals have become alarmingly erratic as a gulf emerges between buyers and sellers who are facing big financing strains,” says Bloomberg.

“The volatility is particularly difficult to navigate because some moves appear to defy fundamentals, with hedge funds exiting long-term bullish bets just as supply looks the tightest in years. Merchants are finding it harder to snap up any cheap cargoes because of huge margin calls and credit line caps.”

Yep. The spike in crude oil to over $130 a barrel two weeks ago today? It looks less like a response to any war/sanctions news and more like one or another leveraged player getting squeezed.

But for the moment, all is (relatively) calm today.

Teresa Ghilarducci teaches at The New School university in New York — where she’s carved out a niche as a well-known “retirement” expert. (More about that momentarily.)

But for everyday folks, the first they heard of her was a few days ago when she published an Op-Ed at Bloomberg purporting to offer advice on how to cope with inflation if your income is less than $300,000 a year. (Why that figure? Because beyond that figure, you spend no more than 1% of take-home pay on gasoline.)

Bloomberg’s social media folk summarized the article like so: 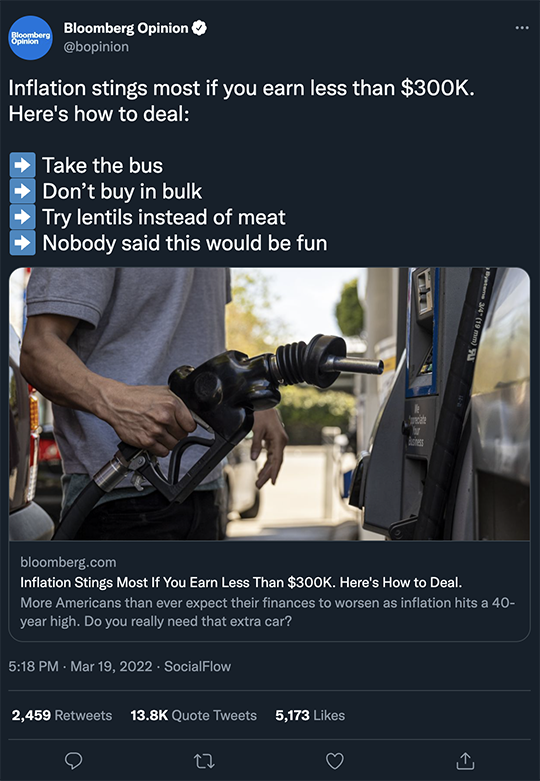 The article itself was barely more sympathetic: “Meat prices have increased about 14% from February 2021 and will go up even more,” she wrote. “Though your palate may not be used to it, tasty meat substitutes include vegetables (where prices are up a little over 4%, or lentils and beans, which are up about 9%). Plan to cut out the middle creature and consume plants directly. It’s a more efficient, healthier and cheaper way to get calories.”

Yes, Ghilarducci is getting roasted across social media. To wit, this meme… 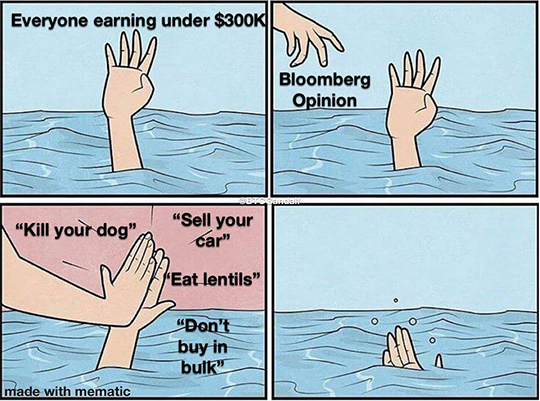 The “kill your dog” part? “If you’re one of the many Americans who became a new pet owner during the pandemic,” she wrote, “you might want to rethink those costly pet medical needs. It may sound harsh, but researchers actually don’t recommend pet chemotherapy — which can cost up to $10,000 — for ethical reasons.”

While the likes of Fox News and the Daily Mail are only now discovering who Teresa Ghilarducci is as a result of her column… she’s been on our radar since 2008.

Because that’s how long she’s been waging a jihad against the tax advantages of a 401(k).

During the worst of the global financial crisis, Ghilarducci was the star witness at a congressional hearing that explored whether “high-income” earners should be excluded from making tax-deferred 401(k) contributions. Fortunately, the idea went nowhere.

But she never gave up. In 2016, she teamed up with Wall Street bigwig Hamilton “Tony” James to propose that the tax breaks of a 401(k) be phased out for everyone, no matter their income.

That too never came to be… but we remember Ghilarducci’s ideas briefly gained purchase among Republicans in 2017 when they were looking around for ways to make up for lost revenue from the Trump tax cuts.

Now here we are in 2022: Teresa Ghilarducci doesn’t exactly wish a cat-food retirement on you — but rather a lentil one. And no cat to keep you company in your impoverishment, either…

“Are all you finance/market gurus working together?” a reader writes, umm, skeptically.

“How many times has Jim Richards the almighty know-it-all that has worked with the government called for a market meltdown in 48 hours or 72 hours or next Tuesday.

“Just like last Wednesday at 2:00 p.m. EST. The move of the Fed will cause a market crash over and above the 2008 bubble burst. Never said watch out for the next month or number of months but today at 2 o’clock.

“I’m wondering how much money you guys are all making getting folks to sell out of one section of the market and then you swoop in and buy, buy, buy.

“Aren’t your readers getting tired of this bull**** or are they so thick that they forget how many times Rickards calls for doom and gloom and after his call the market goes up instead of imploding?

“Haven’t heard a good call from your outfit yet. But I like your general news coverage. I just use your newsletter as a feeler and compare with other news to get a broader picture of current events.”

The 5: C’mon, did you watch the presentation last week beyond the first minute or two?

Jim made it as clear as could be that he was talking about an adage among certain old-school market watchers — “three steps and a stumble,” as the saying goes. That is, the Fed raises interest rates three times and either the economy or the market or both start to roll over.

Now, about your other allegation: To begin with, we have a strict policy that our editors cannot invest in their own recommendations. It’s a long-standing policy of ours, as we’ve explained many times before. It’s just rotten all-around ethically to suggest buying something — especially, say, a small-cap biotech or gold miner — and then cash in as subscribers act on the buy recommendation.

To suggest that we engage in the opposite practice — forecast a stock market crash and then, say, go long S&P 500 call options — well, that’s a new one on us.

For God’s sake, our business rises and falls on credibility. We earn most of our keep selling newsletters and trading services directly to people like you.

Making deliberately wrong calls so as to make a killing by taking the other side of the trade could be enormously lucrative, we suppose, yes — but only once. Maybe twice at most.

No, we’re in this for the long haul.

Thanks for hearing us out. And thanks for sticking with us, your skepticism (cynicism?) notwithstanding.

P.S. Speaking of the Fed…

As we’re going to virtual press, chairman Jerome Powell decided now would be a good time to say the Fed is willing to jack up the fed funds rate in half-percentage-point increments instead of just a quarter.

With that, the Dow’s losses have swelled to about 1% on the day while the other major indexes are decisively in the red.

We said it at the start of the year, and we’ll say it again: The Fed is way more concerned about inflation than it is the stock market. More tomorrow…