So what’s the point of the sanctions, really?

As you’ve likely heard by now, the president said yesterday in Brussels that food shortages as a consequence of the sanctions on Russia are “going to be real” — not just for foreigners but for “our country as well.”

He said that in the course of announcing still more sanctions — at least one of which we’ve already said is doomed to fail.

(Or whatever it is where you live…)

It’s at this time we remember the words of the energy-industry journalist James Norman in his book The Oil Card: “Nation-states behave with logics, moralities and imperatives all their own. Who can know them? When these elephants rage, we pygmies are trampled. It pays to know when to get out of the way.”

This morning’s big announcement from the NATO-EU-G7 get-together is “a major deal on liquefied natural gas,” per the BBC.

“The agreement will see the U.S. provide the EU with extra gas, equivalent to around 10% of the gas it currently gets from Russia, by the end of the year.”

Many companies have a hand in LNG — including Shell and the French giant Total. But the only “pure play” of any size is Cheniere Energy, with the appropriate ticker symbol LNG. It’s up 2.5% as we write this morning.

We’ve talked up LNG (the company) for nearly five years as a beneficiary of Washington’s continued efforts to stymie the Nord Stream 2 pipeline project between Russia and Germany. Probably still a buy in this new world of shifting energy flows, although it’s had a heckuva run from $120 to nearly $145 since the invasion a month ago. Might want to wait for a bit of a pullback …

Meanwhile, Team Biden is looking to up the Pentagon budget from $782 billion this year to $813.3 billion next year.

That’s according to the usual anonymous “officials familiar with the plan,” speaking this time to Bloomberg. And you can be sure Congress will add to the president’s request, as it did this year.

Even before the war broke out, CEOs at the big U.S. military contractors were licking their chops: “We are seeing, I would say, opportunities for international sales,” Raytheon CEO Greg Hayes said on an earnings call in January — citing among other things “the tensions in Eastern Europe.”

Northrop Grumman CEO Kathy Warden sought to sound a little less mercenary, declaring her lines of business “actually promote global human rights proliferation, not the contrary.” Whatever you have to tell yourself to sleep at night, apparently…

As a group, defense stocks underperformed the S&P 500 in 2020 and 2021. That might well be about to change. The most popular ETF in the sector is the iShares U.S. Aerospace & Defense ETF (ITA). But ITA has a huge deadweight in the form of Boeing, with its many woes in civilian aircraft. A better choice might be the SPDR S&P Aerospace & Defense ETF (XAR).

And then there’s gold. 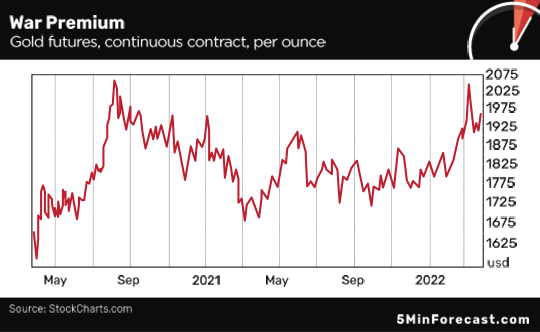 So now what? We turn to our Jim Rickards: “If you believe that the war in Ukraine will end soon, that global supply chains will heal quickly and that inflation is transitory, then gold may revert to the prior $1,800 range.

“In fact, none of those things is likely,” Jim deadpans.

“Even if the shooting stops in Ukraine soon, something that is not at all assured, the geopolitical consequences will dominate events for years or decades. Putin will have asserted Russian de facto control over eastern Ukraine, if not outright annexation. Ukraine’s hope of NATO and EU membership will be permanently denied. And the divisions in the West between the U.S. and U.K. on the one hand and France and Germany on the other with respect to energy and trade with Russia will be on full display. The Western alliance will lie in ruins.

“Supply chains will be in even worse shape. Supply chains take decades to build but can be fractured in a matter of weeks when extreme sanctions are imposed. Russia’s exports will not be ended, but they will be re-routed to China, India and the Middle East instead of Europe and the U.S. The result will be higher costs, longer lead times and persistent shortages.

“Inflation is also not temporary or ‘transitory.’ Once prices of oil, natural gas, strategic metals and agricultural exports spike, they do not retreat unless there is something like a global depression. So your choices are permanently higher prices or a new great depression. Take your pick.

“All of these scenarios are bad for the global economy but good for gold.

“With this as the investment backdrop, gold investors should get ready for what I call $100 days,” Jim suggests.

“At current price levels, making large profits in gold gets easier by the day. Here’s why: If you own gold and it goes up $100 per ounce, you make $100 per ounce. But each $100 per ounce gain is easier than the one before because it’s a smaller percentage gain from a higher denominator.

“That’s why it’s important to buy gold now because this process is just beginning.”

[Confidential to current Rickards subscribers: Watch your inbox for details on how you can take part next week in our first-ever Financial War Game event — based on the financial war game he helped stage for Pentagon leaders a few years back. You’ll learn a lot — not least, an ideal strategy to position your portfolio for the rest of the turbulent 2020s.]

Stocks, meanwhile, are taking a breather as the week winds down.

Cryptos have moved little despite the eyebrow-raising news that Russia might be willing to take Bitcoin as payment for natural gas from “friendly” countries. (For “unfriendly” countries, it’s rubles only, thank you very much.) Still, Bitcoin is a hair over $44,000 and Ethereum over $3,100.

Crude has rallied 1% to $113.43 — at a moment global commodity markets look even more broken than they did a couple days ago.

“We’re seeing clearly that liquidity in terms of being able to find buyers and sellers in distressed or highly volatile markets is becoming less,” says Huw Jenkins, chief of Engelhart Commodities Trading Partners, speaking at a conference in Switzerland.

“As commodities swing wildly,” says Bloomberg, “traders and industrial players are struggling to keep up with massive cash requirements to back up their positions or put on new ones, which is squeezing participants out of the market.”

Near as we can tell, the London Metal Exchange declared a “disrupted session” in nickel trading three days this week — again canceling trades after they’d already been executed.

Pot stocks are popping, based on the news from Washington.

Next week, “the U.S. House of Representatives plans to vote on a bill to federally legalize marijuana,” reports the Marijuana Moment website. The Rules Committee will take it up Monday, followed by a floor vote soon after.

The MORE Act, as it’s known, previously passed the House in late 2020 — but it never got any further, given GOP control of the Senate at the time.

Since the news broke yesterday afternoon, the ETFMG Alternative Harvest ETF (MJ) has sailed nearly 10% higher. Perhaps the thinking — and it’s probably valid — is that even though Joe Biden is an unreconstructed drug warrior from way back, a veto would doom the Democrats’ chances in the midterms — well, even more than they are already.

To the mailbag: “James Altucher owned Bitcoin while pumping crypto. He sold his Bitcoin and then told the readers.

“Is this a violation of your writer’s code of conduct?”

The 5: It’s a fair question. The short answer is no.

The longer answer is that our company handbook carves out a handful of sensible exemptions to the prohibition on writers owning a position in their recommendations. Those exemptions include certain ETFs, options on broad-based indexes like the S&P 500, physical commodities… and Bitcoin and Ethereum.

The thinking is that these assets are so large and liquid that no one editor’s or guru’s recommendation can materially move the price.

Thus, Bitcoin and Ethereum are treated the same as gold and silver coins and bars.

Finally, a reader suggests an edit to the title of our Wednesday edition.

“Look, I get it. I’ve heard the Bitcoin-lacks-utility argument ad nauseam.

“Bitcoin doesn’t need utility or to be a currency right now. Right now, Bitcoin’s sole reason for existence is to be a non-confiscatable, permissionless, non-sovereign decentralized, digital bearer asset.

“If James can’t see the value in this after what just happened in Canada and to Russia, I don’t know what to tell him. He can shift all his focus to the unregistered security space of the crypto world where the risk is very well-defined and enormous.

The 5: James is out of pocket at the moment, but we’re not sure he would necessarily take issue with your “sole reason for existence.” And as he mentioned on Wednesday, he still has every expectation the dollar price of Bitcoin will rise, and rise substantially.

But yes, he’s all-in on DeFi and DeFi is primarily built on an Ether/Ethereum platform. And yes, DeFi is at an early stage where the obstacles look intimidating. We ran across a new report from Morgan Stanley: “DeFi protocols often seem to us as a way to attract cash flow to enrich the protocol operators.” The protocols still have much to prove given that “DeFi is hack-prone and at risk of financial crime given anonymity is a key feature.”

But the people working on DeFi know all that.

To them, the obstacles might be intimidating… but they’re not insurmountable.