“Western capitals are united in opposing linking progress in peace talks between Russia and Ukraine with the lifting of sanctions against Moscow,” says the Financial Times, “instead girding for long-term economic pressure against the Kremlin.”

In other words, even if there’s a political settlement, the post-invasion sanctions will remain.

Doesn’t exactly give Vladimir Putin much incentive to negotiate, then, does it?

But as we suggested in our main topic yesterday, maybe that’s the whole idea.

Washington’s endgame is not a Russian withdrawal from Ukraine; it’s regime change in Moscow. Under this “logic” — such as it is — sanctions will inflict so much pain on the Russian people that in time they’ll rise up and overthrow Putin.

As Joe Biden himself put it, “We have to show resolve… so the people of Russia know what he’s brought on them.”

“As of this writing,” the journalist Matt Taibbi wrote this week for his TK News project, “evidence suggests the United States is not interested in a settlement, and is gunning for a long-term play that would unseat Putin, crack the Sino-Russian alliance and reverse the political malaise that’s beset neoliberal democracies for years.”

A more likely outcome? The sanctions will only strengthen Putin’s support at home.

Indeed, the economic pain felt by everyday Russians actually puts more pressure on Putin to perform on the battlefield.

“If the West continues to impose new sanctions, then Russia will have no other option but to also raise the stakes because there is no room for retreat,” says Fyodor Lukyanov, chairman of the Council of Foreign and Defense Policy, an outfit that advises the Russian government.

“There is no option in the current situation that would allow us to smoothly take a step back without suffering catastrophic political consequences,” Lukyanov says in an interview with reporter Dimitri Simes Jr., published at Substack.

Simes heard a similar case from Dmitry Suslov, who teaches international relations at one of Russia’s most elite universities, the National Research University Higher School of Economics.

Suslov reminds us that Putin is not all-powerful; he has to contend with Kremlin factions of relative moderates and hard-liners. “If the West makes it clear that sanctions will at least be partially removed once the military operation comes to an end,” says Suslov, “then the compromise faction will be strengthened.

“However, if Moscow gets the sense that the West is waging ‘total economic war’ against Russia, then Putin will have little incentive to not go all the way.”

But don’t take it from a couple of eggheads in Moscow. Just look at the failure of sanctions targeting Washington’s other bête noires around the world.

Since February 1962 — over 60 years now! — Washington has imposed an embargo on nearly all exports to Cuba.

And yet the sanctions have not spurred a revolution. Everyday Cubans are still driving their ’57 DeSotos. The whole time, the Castros and their compadres have clung to power.

True, for the first three decades, Havana was propped up with generous subsidies from the Soviet Union. But the Castroite regime has plugged away just fine for three more decades without its sugar daddy in Moscow.

Then there are the sanctions imposed against Iran — punishment for its pursuit of nuclear energy.

In some ways, the sanctions imposed on Tehran during Barack Obama’s first term were even more draconian than the ones imposed on Moscow now — and the effects, far more severe.

“The United States,” wrote our Jim Rickards in his 2014 book The Death of Money, “had inflicted a currency collapse, hyperinflation and a bank run and had caused a scarcity of food, gasoline and consumer goods, through the expedient of cutting Iran out of the global payments system.”

But you’ll notice the mullahs are still in charge. “Iran had fought the United States to a standstill in its financial war,” Jim wrote.

We’d go a step further. Conventional wisdom in the Beltway is that the 2015 Iran nuclear deal came about only because “the sanctions worked” — that is, the Iranians had been more or less starved to the negotiating table.

In reality, it was Washington that was more eager to negotiate — realizing the sanctions had utterly failed in their stated aim to derail the Iranian nuclear program. When the sanctions started to bite in early 2011, Tehran had fewer than 200 advanced nuclear centrifuges. By mid-2013, it had over 1,300.

That was a lot of bargaining chips.

But let’s assume that against all odds, U.S. sanctions inspire a popular revolt that topples Putin. Then what?

“If we succeed in deposing Putin over Ukraine, what evidence is there that we won’t end up with someone even worse than Putin in the Kremlin in very short order?” wonders Matt Taibbi — who watched Putin’s rise while living in Russia during the Yeltsin years of the 1990s.

“Any replacement for Putin the U.S. would find acceptable would have to evince a range of views putting him or her directly at odds with most of the population, like for instance a tolerance for NATO expansion. The seeds of reaction would be there from the jump.

In the meantime, even mainstream institutions are waking up to the threat that sanctions pose to the dollar’s role as king of the currency hill… 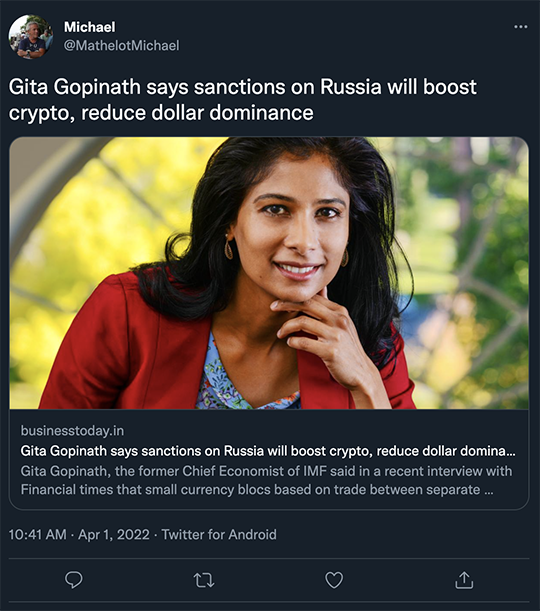 Gita Gopinath is an Indian-American economist who ascended this year to the No. 2 position at the International Monetary Fund. God help us, former Fed chairman Ben Bernanke was one of her mentors while she worked on her dissertation at Princeton 20-odd years ago.

She warns the Financial Times that sanctions could, in time, encourage the development of alternative currency blocs.

“The dollar would remain the major global currency even in that landscape but fragmentation at a smaller level is certainly quite possible,” she says. “We are already seeing that with some countries renegotiating the currency in which they get paid for trade.”

Gopinath noted what we’ve noted ourselves in these virtual pages: The dollar’s share of global reserves has fallen from about 70% at the start of this century to 60% now.

In addition, she anticipates a flight to digital assets — whether they be cryptocurrencies, stablecoins or (gulp) central bank digital currencies.

The March job numbers won’t do a thing to dissuade the Federal Reserve from its rate-raising plans.

The wonks at the Bureau of Labor Statistics conjured 431,000 new jobs for the month — less than expected, but they revised February’s number higher.

On the big chart from Calculated Risk, depicting the job losses and recoveries from every postwar recession, the current recovery (the red line) looks impressive… until you realize it’s still taking longer than every recession before 1981. Indeed, it’ll take another 1.5 million jobs to reach February 2020 employment levels. 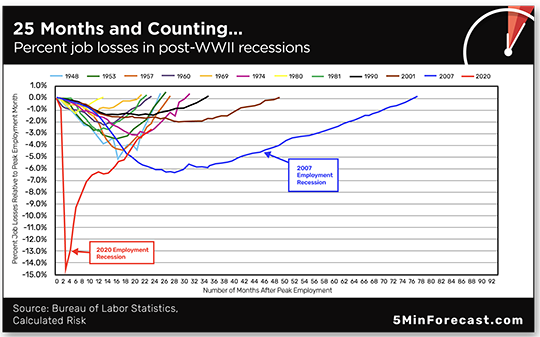 The official unemployment rate rings in at 3.6%.

As we write this morning, the trade in fed funds futures suggests a 74% probability the Fed will raise its benchmark interest rate half a percentage point in early May… and a 59% probability of another half-point increase in mid-June.

➢ One other economic number of note: The ISM manufacturing survey for March clocks in at 57.1. That’s well above the 50 dividing line between growth and contraction, but it’s also the lowest number since September 2020. Over in China, a similar measure has fallen below 50 as Shanghai locks down in the name of zero-COVID.

Still, the stock market is taking the prospect of further Fed tightening in stride.

Yes, the market sold off rather hard yesterday and the day before… but our floor-trading veteran Alan Knuckman says the real tell lies in the VIX, a measure of market volatility popularly known as the “fear gauge.” 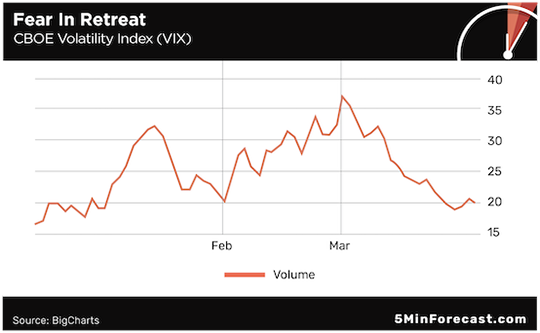 From an intraday peak of 38 in early March, the VIX took a 50% tumble by early this week. As we write, it’s just below the psychologically important round number of 20. “Lower VIX means more S&P 500 uptick,” Alan told readers of The Profit Wire yesterday.

“While we’re on the subject of Russian regime change,” a reader writes, “how ’bout your take on current events of Biden family personal financial dealings in Ukraine, Russia and China?

“Is this war’s purpose for regime change AND cover-up of personal graft? Heaven knows we won’t hear the truth from the fake news.”

The 5: Let’s put it this way: The topic is on our radar, but we await the emergence of further compelling evidence before we make it “a thing.”

We see an immense amount of breathless reporting from conservative outlets, going overboard in attempting to connect dots. At times, it reminds us of what liberal outlets were doing during Trumptime. (“The walls are closing in!”)

We’ll say this much, though, seeing as you gave us an opening: When it comes to Hunter Biden’s laptop, the conduct of both legacy media and social media is execrable.

And your editor says that with the authority of someone who worked in the TV news racket for 20 years — remembering when journalists adhered to at least some reasonable standard of ethics.

At the time, we took note of that development in the context of our continued lament that social media firms exercise censorship not out of their own independent judgment — but rather under blatant pressure from the halls of government.

Fast-forward to this spring… and as you’re perhaps aware, both The New York Times and The Washington Post have put out stories acknowledging that, yes, the emails on the laptop are indeed authentic.

There was never any evidence to suggest they were fake. And the media were careful not to say so directly back in October 2020. Instead, they fell back on the canard that the Hunter Biden laptop story amounted to… wait for it… “Russian disinformation.”

The media were given cover by dozens of retired intelligence-agency types — most from the Obama years like James Clapper and John Brennan, but also Dubya Bush’s CIA director Mike Hayden. They issued a carefully worded open letter that went thus…

We want to emphasize that we do not know if the emails, provided to the New York Post by President Trump’s personal attorney Rudy Giuliani, are genuine or not and that we do not have evidence of Russian involvement — just that our experience makes us deeply suspicious that the Russian government played a significant role in this case.

But all the nuance in there was thrown out the door in the media’s disingenuous coverage during that fall of 2020. Politico was typical… 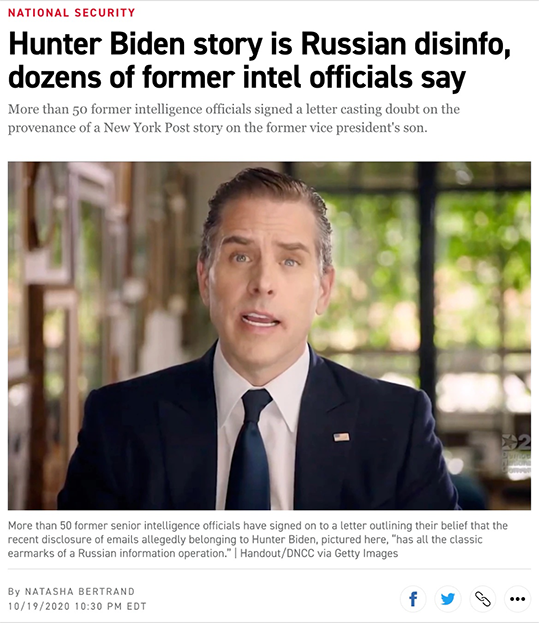 As Glenn Greenwald pithily summed up on his Substack page: “A media that was overwhelmingly desperate to ensure Trump’s defeat had no time for facts or annoying details such as what these former officials actually said or whether it was in fact true. They had an election to manipulate.”

But now, with the 2020 election and Jan. 6 and everything else safely in the rear-view… the Establishment media can safely acknowledge the emails are legit.

Buried in the Gray Lady’s story last month was this line: “Those emails were obtained by The New York Times from a cache of files that appears to have come from a laptop abandoned by Mr. Biden in a Delaware repair shop.” A similar line appears in The Washington Post’s story this week.