From Jim Rickards’ lips to the corporate media’s ears… 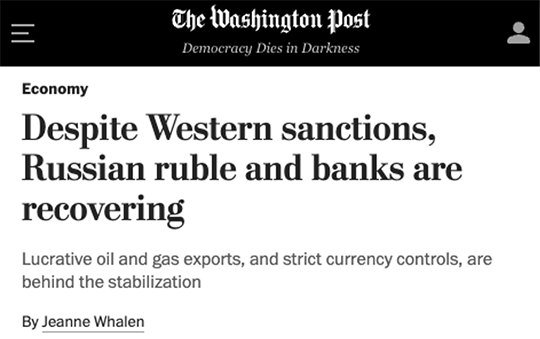 It was on Tuesday Jim declared the sanctions “a complete failure” judged by their “strategic aims.”

This morning, the Russian ruble has recovered nearly all of its steep losses against the U.S. dollar since Russia invaded Ukraine on Feb. 24.

The clearest example of the sanctions’ failure is this: It appears Germany will pay for Russian natural gas in rubles — albeit in a roundabout, face-saving way.

Today is the deadline Moscow set for “unfriendly countries” to start paying for their natgas in rubles. That’s a big deal because European Union nations get 40% of their gas from Russia.

For a day or two, the EU issued pro-forma statements of defiance. Early yesterday, the German government warned its citizens about the prospect of natgas rationing.

But it seems that’s all over now: German Chancellor Olaf Scholz got on the phone with Vladimir Putin and came to terms.

Per a statement from the German government, European companies can continue to pay in euros or dollars. The money will be processed through the banking arm of the Russian gas giant Gazprom, which will then convert the euros and dollars to rubles.

The broad outlines of the deal were surely hashed out beforehand by underlings. It was a win-win triumph of diplomacy — sober-minded diplomats doing, you know, diplomatic things.

For most of this week, Russian and Ukrainian negotiators have been meeting in Turkey. By all indications, they’ve made progress. Ukraine appears willing to give up any aspirations of membership in the NATO alliance… ready to recognize Crimea as Russian territory… and prepared to recognize Ukraine’s Russian-speaking far east as an independent republic.

But Blinken is unimpressed, saying he sees no indication talks are moving in a “constructive way.” Any signs of Russian troops pulling back? That could simply be Putin seeking to “deceive people and deflect attention.”

It’s at this point we have to come back to Joe Biden’s testy word salad last week during his trip to Europe.

After Biden announced still more sanctions against Russia, a reporter asked him how he expects the sanctions to deter Putin.

“Sanctions never deter,” Biden snapped. “The maintenance of sanctions — the maintenance of sanctions, the increasing the pain, and the demonstration — why I asked for this NATO meeting today — is to be sure that after a month, we will sustain what we’re doing not just next month, the following month, but for the remainder of this entire year. That’s what will stop him.”

It made zero sense to us… until veteran reporter Joe Lauria, who once covered the diplomacy beat at the United Nations for The Wall Street Journal, pointed to an earlier Biden statement.

This one came hours after Russia invaded and Biden announced sanctions. What would they accomplish, he was asked, seeing as previous sanctions failed to deter Putin’s invasion?

His response: “No one expected the sanctions to prevent anything from happening. That has to sh- — this is going to take time. And we have to show resolve, so he knows what’s coming and so the people of Russia know what he’s brought on them. That’s what this is all about.”

Now it all makes sense: The U.S. government needed this war to achieve Russian regime change.

“Without it,” Lauria writes at Consortium News, “Washington could not attempt to destroy Russia’s economy, orchestrate worldwide condemnation and lead an insurgency to bleed Russia, all part of an attempt to bring down its government. Joe Biden has now left no doubt that it’s true.”

The sanctions were never intended to prevent an invasion, Lauria elaborates — but rather “to punish Russia and get its people to rise up against Putin and ultimately restore a Yeltsin-like puppet to Moscow. Without a cause those sanctions could never have been imposed. The cause was Russia’s invasion.” [Emphasis ours.]

“The U.S. can still end this war through serious diplomacy with Russia,” Mr. Lauria continues. “But it won’t. Blinken has refused to speak with Russian Foreign Minister Sergei Lavrov. Instead, Biden announced on March 16 another $800 million in military aid for Ukraine on the same day it was revealed Russia and Ukraine have been working on a 15-point peace plan.

“It has never been clearer that the U.S. wanted this war and wants it to continue.”

We’ll leave it there for today. Tomorrow we’ll explore how if the whole point of the sanctions is to spur everyday Russians to rise up and overthrow Putin… it’ll never work.

If the ruble is back to where it was at the start of the war, U.S. gasoline prices most certainly are not. Which brings us to the Biden administration’s SPR gambit.

As we write, Team Biden is confirming plans to drain the Strategic Petroleum Reserve: Over the next six months, fully 1 million barrels a day will be emptied from the salt caverns of Louisiana and Texas where the U.S. government has held the SPR since Jimmy Carter’s day. 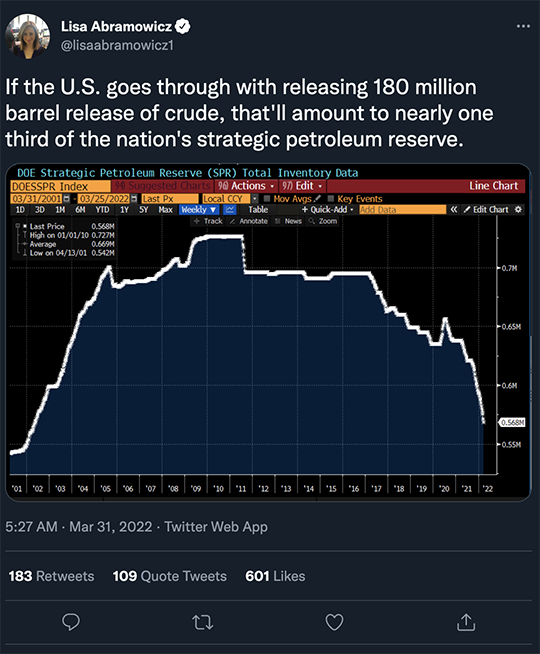 Six months brings us to the end of September and a few weeks before the midterm elections.

We’re sure Republicans will carp about Biden using the SPR to play politics — but he’s hardly the first president to do so.

“The SPR has been regularly toyed with to affect oil prices over the years, and its impact has at times been substantial,” wrote the oil industry journalist Jim Norman in his 2008 book The Oil Card. Reagan, Poppy Bush, Clinton — they all did it.

Of course, beyond Election Day there’s the question of filling the SPR back up in preparation for the next supply shock.

Meanwhile, members of the “OPEC+” nations — a group including Russia — met today and agreed to stick to their current springtime production targets.

At last check, a barrel of West Texas Intermediate is down more than 4% at $103.34. On the other hand, it’s still about 75 cents higher than it was at this time 48 hours ago.

Inflation is not yet in retreat — not judging by the Federal Reserve’s preferred inflation gauge.

The Commerce Department issued its reading of “core PCE” this morning. At 5.4% year over year, it’s running the hottest since April 1983 — when Michael Jackson topped the charts with “Billie Jean” and Jennifer Beals was coming on strong at the box office with Flashdance. 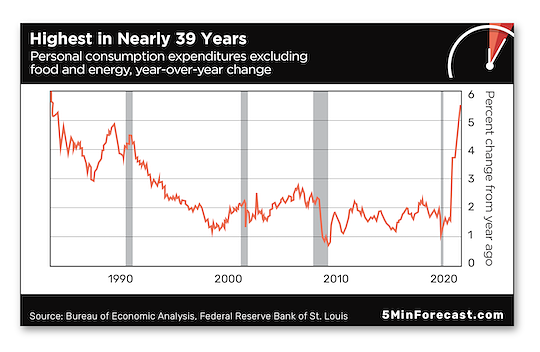 There’s nothing in that number to dissuade the Fed from raising the fed funds rate a half-percentage point at its next meeting in early May. Beyond early May, meanwhile… 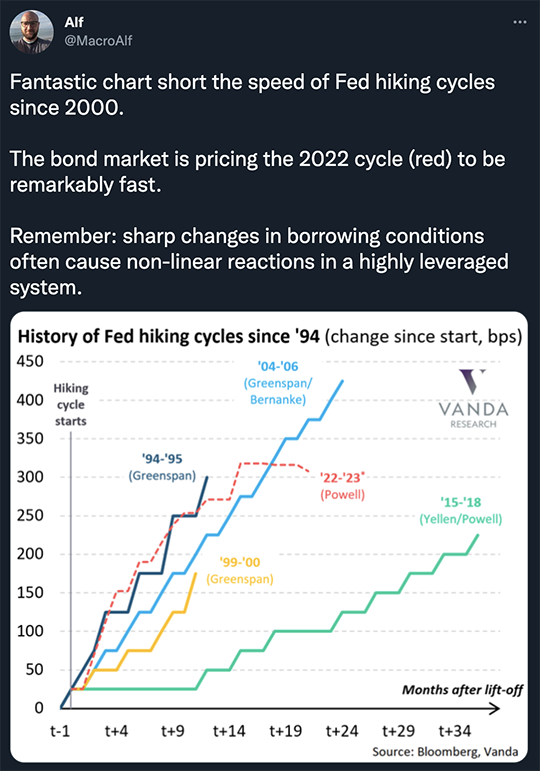 The same Commerce Department report shows consumer spending grew a meager 0.2% in February — down sharply from January’s revised 2.7% jump. Which would suggest inflation is taking a toll on the mighty American consumer.

Aside from crude, the market action is suspiciously quiet today.

Precious metals are up, but not by anything to write home about — gold at $1,944 and silver a nickel away from $25.

A federal court has struck another blow for common sense in the what’s-in-a-name food labeling wars.

In Louisiana, something called the Truth in Labeling of Food Products Act took effect in 2020 — banning the use of terms like “meat” and “sausage” in vegetarian product marketing.

Background from Elizabeth Nolan Brown, writing at Reason: “As plant-based alternatives to animal products — including meat, milk and mayonnaise — have gained in popularity, there’s been a growing push (often driven by the likes of dairy farmers and other animal-product producers) to control what companies can call these alternative products.

“Proponents of laws like the one in Louisiana argue that categorizing vegetarian and vegan products by names once reserved for animal products is deceptive and consumers will be confused.”

Louisiana’s insult to the consumer’s intelligence did not go unchallenged: Tofurky — maker of “meats” that are also clearly labeled “plant-based” — went to court and argued on First Amendment grounds.

Tofurky has prevailed: “The Louisiana court has seen right through the disingenuous pretext under which this law was passed,” says Tofurkey CEO Jaime Athos.

Nice — and on the heels of a decision last year upholding “vegan butter” in California.

Alas, near as we can tell, you still can’t market “cauliflower rice” in Arkansas.

To the mailbag, and horrified reactions to the reader who suggested that U.S. assistance for Ukraine does not constitute “a war against Russian sovereignty. Just make sure to stay out of their borders.”

“We in the West,” reads one, “have no concept of the visceral reaction of Russians having a foreign army in Ukraine yet again.

“This would certainly be WWIII. Von Clausewitz total war! These morons in D.C. know no bounds while believing their own lies. God save us from these miscreants!”

The 5: As we said before the war broke out, it’s almost in the Russian DNA to fear invasion from the West — after Hitler in the 20th century, Napoleon in the 19th, the Poles and Lithuanians in the 17th.

“How does your reader justify the USA invading the sovereign countries of Iraq, Mexico many times and any Central American country you dare to mention?” says another.

“And let’s not forget American support for the Saudi Arabian invasion of Yemen. Talk about the kettle calling the pot black!”

The 5: It was actually Iraq targeted by Clinton’s “Monica missiles.” He’d already survived impeachment by the time he bombed Serbia for 78 straight days. But hey, a generation’s gone by and it’s easy to get mixed up on Bubba’s promiscuous military misadventures.

Anyway… For all of the aforementioned Antony Blinken’s chatter about a global “battle between democracy and autocracy”… he had no qualms about attending a chummy summit of Middle East tyrannies on Monday.

Egypt is especially egregious: “Egypt under President Abdel al-Sisi is widely considered, along with Syria, to be perhaps the most repressive dictatorship in the region,” writes Jim Lobe for the Quincy Institute, “with thousands of peaceful dissidents languishing for years in overcrowded prisons and most nongovernmental organizations operating under unprecedented constraints when they are permitted to operate at all.”

“Blinken’s enthusiastic endorsement of this burgeoning axis of Mideast states regardless of their human rights records,” Lobe writes, “marks a return to the familiar Cold War politics where generous U.S. support for all kinds of repressive states, especially in the Global South, was justified by the overriding necessity of containing and defeating the Soviet Union.

“If Blinken wants to focus on Russia’s aggression and defiance of the international ‘rules-based order,’” Lobe concludes, “this meeting is not a good look.”