The Next Fed Failure

“You can’t think of a worse environment than where we are right now for financial assets,” the legendary trader Paul Tudor Jones tells CNBC this morning. “Clearly you don’t want to own bonds and stocks.”

It was after Black Monday when the Federal Reserve adopted an unofficial policy of support for the U.S. stock market whenever the market got into trouble. As we’ve said since the start of this year, the Fed has now abandoned that policy. Putting a lid on inflation is a higher priority.

Jones does not envy the Fed’s position: “They’ve got inflation on the one hand, slowing growth on the other and they’re going to be clashing all the time.”

Today the Fed’s Open Market Committee begins another one of its every-six-weeks meetings. Come tomorrow afternoon, the FOMC will issue a statement raising the benchmark fed funds rate a half percentage point.

That much is certain: The Fed is setting a pattern in motion that’s presaged nearly every market crash of the past century — as Jim Rickards shows you right here.

That’s bad enough. What’s worse is that at the same time, the Fed will be doing something it’s never done before — shrinking its swollen balance sheet when the economy is something less than “robust.”

Tomorrow the Fed will lay out its plans for “quantitative tightening.” 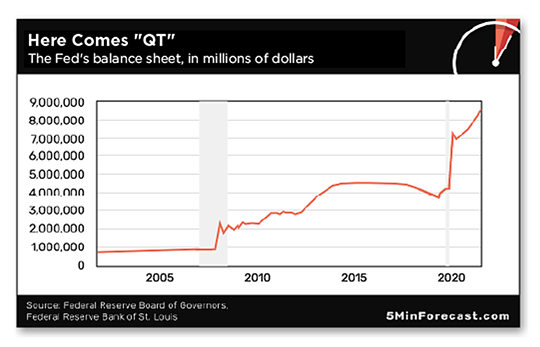 Instead of buying Treasuries and mortgage-backed securities, the Fed will be selling them — likely to the tune of $80-95 billion a month.

If you look at the last couple of years on the chart, you’ll see the Fed is pivoting almost immediately from QE to QT. The last purchase of new debt under QE came on March 9. Shrinkage of the Fed’s balance sheet will likely begin later this month.

So we’re looking at only two months in which the Fed’s balance sheet is treading water. Contrast that with the loooong period of a stable balance sheet between late 2014 and late 2017. The Fed held steady for three years — fearing the stock market would react badly if it started pulling liquidity from the financial system any sooner.

And even the previous incident ended badly, despite a (relatively) healthy economy. Within a year of embarking on QT, the stock market threw a hissy fit.

“The Fed’s last experiment in tightening failed with a 20% stock market crash in the fourth quarter of 2018,” Jim Rickards reminds us.

“When the Fed started QT in late 2017, they urged market participants to ignore it. They said the QT plan was on autopilot, the Fed was not going to use it as an instrument of policy and that it would ‘run on background’ just like a computer program that’s open but not in use at the moment.

“It’s fine for the Fed to say that, but markets had another view. Analysts estimate that QT is the equivalent of two–four rate hikes per year over and above the explicit rate hikes.

“Not surprisingly, we had the Christmas Eve Massacre in December 2018, and Fed chair Jerome Powell was forced to begin easing policy again.

“The Fed quickly backed off and began cutting rates and printing money (through QE) in 2019 and early 2020.

“The Fed failed in 2018 and will likely fail again. The same people are still in place, using the same faulty economic models,” Jim concludes.

Odds the Fed can pull off a “soft landing” and contain inflation without crashing the markets? “Very low,” says Jim. “All I can say is don’t count on it. It’s getting time to assume crash positions.”

Again, the Fed makes its move tomorrow afternoon at 2:00 p.m. EDT. You really want to check out Jim’s warning and his action plan — you could conceivably replicate Paul Tudor Jones’ 1987 performance — before then. Watch now while there’s still time to act.

As if a Fed-induced crash isn’t enough to worry about, there’s always the prospect of a mysterious “flash crash” — as happened in Europe only yesterday.

The trouble originated with Nasdaq Stockholm, operator of what was once called the Stockholm Stock Exchange — which was quick to issue a statement saying there was no internal server error or hacker attack.

Yeah, right. Nasdaq still hasn’t come clean about why it had to halt trading on the American Nasdaq for more than three hours on a summer day in 2013.

Later, Citi issued a statement saying, “One of our traders made an error when inputting a transaction. Within minutes, we identified the error and corrected it.” So the old fat-finger explanation.

Mmm-hmm. We still recall a fat-finger error (again at Citi!) was the initial explanation for the flash crash of May 2010 — in which the Dow plummeted 9% in a matter of minutes. The feds finally fingered a patsy in 2015 — a 36-year-old man still living with his parents in suburban London, but who was supposedly savvy enough to control tax shelters in Nevis and Anguilla.

That sound you hear in the distance? It’s trust in financial markets getting flushed down the toilet…

No such drama in U.S. markets today, however: The major averages are adding to a late-day rally from yesterday.

Treasury yields are pulling back. After touching 3% briefly yesterday, the yield on a 10-year T-note is back below 2.94%.

OK, in light of the Nasdaq’s miserable performance that we spotlighted yesterday, we can’t help piling on… 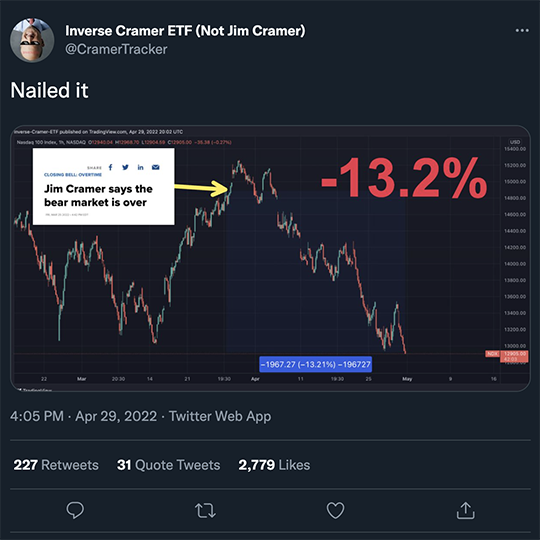 Yes, professional loudmouth Jim Cramer declared an end to the tech bear market in late March, and the rest is history.

It seems several people have undertaken to construct an “inverse Cramer” index. One, from the “Unusual Whales” website, is up 6.6% on the year… while following Cramer’s advice would have you 20.6% in the hole.

Heh… We can’t help wondering how an inverse-Cramer ETF would have performed when the dot-com bubble burst in early 2000.

He was still running a hedge fund back then. At the tippy-top of the bubble, he delivered a speech and talked up 10 tech stocks with his usual bombastic enthusiasm. “We are buying some of every one of these this morning as I give this speech,” he said.

Nine of the 10 are no longer in business, most of them acquired by competitors after the bubble burst at a fraction of their 2000 prices. The only survivor is VeriSign (VRSN) — which at $180 this morning still trades below its $255 peak in March 2000!

As it happens, various academics have examined Cramer’s track record and concluded, yes, you’d be better off shorting the stocks he says are buys.

In 2008, University of Dayton finance professor Carl Chen examined a long series of Cramer recommendations. According to Barron’s, “Chen found signs that the smart money bets against Cramer’s buy recommendations by using short-term in-the-money puts. Those bets could earn over 25% in a month, Chen concludes, at the expense of Cramer’s fans.”

Always remember: Cramer is first and foremost an entertainer. Your financial well-being is at best a secondary concern…

To the mailbag, where we address a reader’s concerns that we didn’t have time for yesterday.

Long story short, the reader was wondering why the dollar is so strong relative to other major currencies right now. He also speculated that gold is losing some of its luster to crypto.

Jim Rickards cites a couple of reasons the dollar has been strengthening since February, and surging since April.

“The first reason the dollar is getting stronger despite weak fundamentals is that every other country is worse. The euro is on the front lines of the war in Ukraine. Energy prices are soaring and there’s no assurance that Russia will not cut off European energy supplies any minute.

“The U.K. is further removed from the war than the EU but suffers many of the same problems. Australia is facing slower growth because it is dependent on China as its major trading partner and China is slowing dramatically. Japan is also suffering from supply chain disruptions and slower growth in its trading partners, including China and the U.S.

“The second reason is the dollar’s role in the global monetary system. That system is not run by the central banks (contrary to what you hear constantly). It’s run by commercial banks through the creation of offshore eurodollars. The eurodollar system is highly leveraged and depends on U.S. Treasury bills and notes as its preferred form of collateral to support the leverage. Today, the system is under stress and the demand for Treasury bills is huge.

“This puts upward pressure on the dollar because it’s needed to buy Treasury bills to support the system. That won’t change soon even if the U.S. economy is weak.”

As for crypto stealing gold’s thunder… we’re familiar with the argument, and we’ve heard it from people whose opinion we respect… but we’re still not convinced.

As we said in early February, a more plausible explanation for gold’s relative underperformance is that for more than a decade now, stocks have appeared more attractive.

And we’ll reiterate: If the stock market is still stuck meaningfully below its record highs by the end of this year… it’ll probably be time to load up on gold.