And so the countdown clock begins.

“Russia is believed to have defaulted on its debt for the first time since 1998 after missing a key deadline,” reports the BBC.

It’s not that Russia’s government lacks the money to meet the $100 million payment due yesterday; it’s that Western sanctions have prevented the payment from going through.

Really, it’s something of a miracle that Russia managed to forestall this event until now, four months after the invasion of Ukraine.

Within a week or 10 days, expect this latest consequence of Western sanctions to boomerang on the West.

Who’s holding these now-defaulted bonds? And how much do they owe to their creditors? If Russia can’t pay up, will they lack the ready cash to meet their own debt obligations?

These are questions of deep interest to our own Jim Rickards — not least because he was in the eye of the storm when Russia last defaulted in 1998.

The domino effect of that default took down the American hedge fund Long Term Capital Management — and in turn threatened to take down 14 major U.S. banks.

As LTCM’s top lawyer, Jim negotiated a rescue with the banks and the Federal Reserve. The hedge fund was able to cover its losses and prevent any spillover into the banks’ derivatives trades. (No taxpayers were harmed in this bailout.)

Point being, “we have not heard the end of surprise financial losses from this war,” Jim warns of present events.

“Stock market crashes usually happen quickly, but losses in off-balance-sheet derivatives sometimes take weeks to be publicized because banks try to hide the losses and the entire market operates behind the curtain.

“Still, the losses do come to light sooner rather than later. It’s just that it takes a week or more for the bodies to float to the surface.”

Then comes the impact to the stock market. After last week’s rally, the market is down about 19% year to date. Those losses could easily double or worse.

And if it’s not Russia that sends the house of cards tumbling, it could be any one of a half dozen other factors — as Jim explains in this exclusive interview right here.

The boomerang risk notwithstanding, leaders of the G7 countries are doubling down on sanctions.

“Together, the G7 will announce that we will ban the import of Russian gold, a major export that rakes in tens of billions of dollars for Russia,” tweeted Joe Biden yesterday as G7 leaders met in Germany.

Big deal, says Jim Rickards. “For over a decade, Russian gold mines have been free to sell their gold on world markets,” he explains. “Likewise, the Central Bank of Russia has acquired over 1,700 metric tonnes of gold with steady monthly purchases from bank dealers scaled so that they did not disrupt global markets.”

Gold “can be easily be melted and re-refined, “Jim goes on. “This makes it impossible to trace.

“Russia has ample refineries and gold mines of its own. If Russia is cut off from global markets, it can simply require Russian mines to sell to the Central Bank of Russia and use Russian refineries to convert ore from those mines to 1-kilo gold bars of 99.99% purity.

“The miners still get paid. The refineries are kept busy. And the Central Bank of Russia still gets the gold (at least the 350 metric tonnes per year that Russia produces).”

Thus are G7 sanctions rendered irrelevant. “It’s a bit less efficient than the current system, but it does little or no damage to Russia’s gold holdings or to Russian miners.“

But hey, if it makes Western leaders feel better about themselves and makes it look as if they’re “doing something” for half a news cycle, it’s all good, right?

To the markets, where the gold price is scarcely reacting to the G7 announcement — not that we expected it to.

There’s nothing in the big economic number of the day to dissuade the Federal Reserve from its “tightening” plans.

If you strip out the volatile categories of aircraft and military hardware, you get a more revealing figure called “core capital goods” — and this figure also rose more than expected, 0.5%.

Then again, these are May figures. Early readings for June — admittedly, they’re “soft data” derived from surveys of factory managers — look weak.

Here we go again — another high-profile failure in the biotech sector’s quest for an Alzheimer’s treatment.

“Alzheimer’s drug development is littered with failures,” he reminds us. “Up until recently, the only drugs ever approved only masked the progression of the disease for a short while. The one approved drug that claims to make a real difference, Biogen’s aducanumab, is riddled with controversy as to whether it really works or not, despite the FDA’s decision.

“The fact that Roche’s drug failed should not be surprising. Crenezumab was designed to treat Alzheimer’s by helping clear out protein tangles in the brain associated with Alzheimer’s disease, known as amyloids. Many drugs with this mechanism of action have failed, aducanumab’s approval notwithstanding.

“While treating neurodegenerative diseases like Alzheimer’s and others has become the biotechnological equivalent of a moonshot, we shouldn’t give up hope. Eventually, we landed on the moon. Hundreds of billions of dollars in potential sales would be on tap for whoever designs a working therapy that can slow or stop the progression of these diseases. The profit potential, of course, spurs billions in new research and development.”

Ray closely watches a handful of players pursuing treatments that don’t rely on the amyloid plaque theory. One in particular is still a buy in the Technology Profits Confidential portfolio.

Bitcoin has broken back below $21,000 and Ethereum below $1,200. But there’s intriguing anecdotal evidence that the worst is over for this cycle… 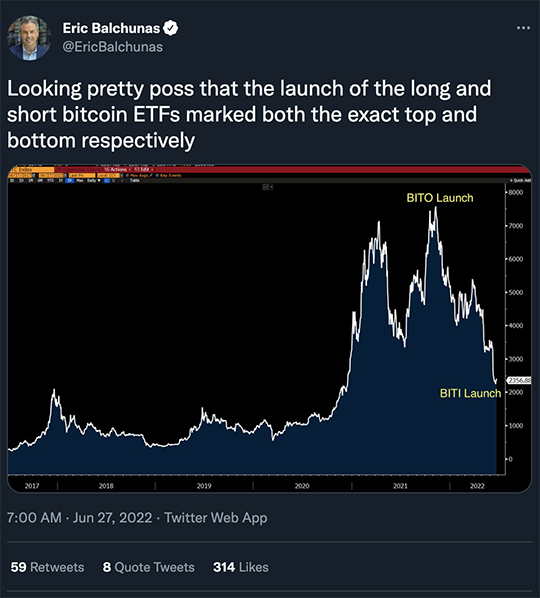 Last week, the ProShares family of funds launched its BetaPro Inverse Bitcoin ETF (BITI) — a vehicle designed to rally as Bitcoin sells off. As it happens, Bitcoin bottomed a little over $18,000 a few days ago.

Among the casualties claimed by the current crypto winter: the media’s credibility… 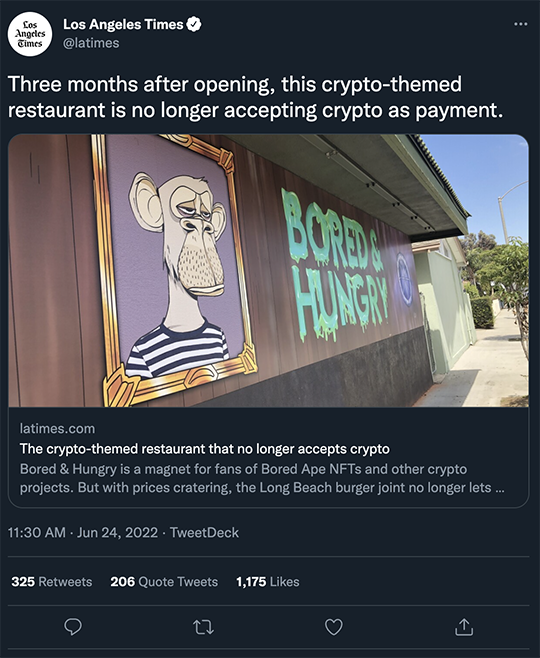 On Friday, the Los Angeles Times published a 1,050-word story following up on the opening of a crypto-themed burger joint in Long Beach called Bored & Hungry.

Yes, there were meme-ish references to “Bored Apes” on the walls and the cups and the trays… but the unique selling proposition was the option for customers to pay in Ethereum and ApeCoin.

The gist of the story is that less than three months after opening in April, the restaurant was no longer accepting crypto for payment. Fiat only. “Inside the Crypto Restaurant After the Crypto Crash,” said the headline.

The paper sought comment from owner Andy Nguyen, but no reply. A hapless employee queried about when the change occurred could say only, “Not today — I don’t know.”

Then came the climb-down — in the form of an “update” about 18 hours after publication. (Does anyone do “corrections” anymore? But we digress…)

“After this story was published, Bored & Hungry co-founder Kevin Seo responded to say the restaurant’s system for accepting cryptocurrency payments was temporarily shut off for system upgrades during a Times reporter’s visits. Seo said the restaurant is now accepting Ethereum and ApeCoin as payment.”

“I can fully understand why oil companies will not build new refineries, as the payback is a very long-term commitment,” a reader writes after our energy reality check last week.

“Our real problem with gasoline prices is not the availability of the raw materials but rather the lack of refineries and their age. And certainly not ‘profiteering by gas station owners,’ as the president thinks. Obviously, it’s not a simple choice of opening more oil fields and producing more.

“Just as a thought, I looked up ethanol production (I know it’s not so green) but from the charts I could find it appears that there is excess capacity to produce more today. Something to look into perhaps from a number or viewpoints.

“I look forward to your email every day.”

The 5: Excess capacity is one thing… but will the corn crop be sufficient this year? Never mind the folly of using food for fuel and paying for it with exorbitant taxpayer subsidies…

On the subject of the “zero-star hotel” in Switzerland, one of our regulars writes…

“I sure hope that petrol station is open 24 hours — else the only thing patrons will be contemplating is the urgent need to change the fact that there’s no en-suite bath.

“Keep up the good fight!”

“The reader’s comments about his experiences with the Communist Party as a member of a business delegation to China in 1994 were outstanding,” writes our final correspondent

“It should be required reading for anybody interested in doing business with them. The knife is always pointed at your throat.”

The 5: We don’t have any particular animus for the Chinese government. We don’t pay taxes to them and they don’t act in our name.

On the other hand, for the American businesspeople who chose to play footsie with the Chinese government, got burned and now are crying to Washington for relief, we have nothing but contempt.

The usual complaints you hear on that score are “theft of intellectual property” and “forced technology transfers.”

Leaving aside the question of whether “intellectual property” is even a valid concept — scholars like Stephan Kinsella make a compelling case it’s not — much of human progress can probably be chalked up to its “theft.”

New England’s storied textile industry of the early 19th century was built almost entirely on “stolen intellectual property.” It just so happened that guys like Samuel Slater and Francis Cabot Lowell had more or less photographic memories; after observing England’s textile mills up close, they came to America and improved on what they’d seen in the old country.

The Patent Act of 1793 gave nearly carte blanche to Americans who “stole intellectual property” from other countries. “America thus became, by national policy and legislative act, the world’s premier legal sanctuary for industrial pirates,” wrote economist Pat Choate in his book Hot Property: The Stealing of Ideas in an Age of Globalization. “Any American could bring a foreign innovation to the United States and commercialize the idea, all with total legal immunity.”

As for “forced technology transfers,” we’ve said before that no one held a gun to the heads of American multinational CEOs. They willingly transferred that technology to a country that has no history with the rule of law as we Westerners know it because… well, how can you pass up access to a market of 1.4 billion people, right?

The fact that it’s all turned sour now? Too bad, so sad…