So said the renowned foreign policy scholar John Mearsheimer. In 2016.

We return today, however reluctantly, to the unsettling topic of nuclear war — because as we said here, also in 2016, there won’t be any markets or economy for us to talk about if the earth is pockmarked with smoldering radioactive craters.

Mearsheimer has a point about the passing of generations. Many of The 5’s boomer-age and older readers still remember the Cuban Missile Crisis of 1962. Your Gen-X editor well remembers the early-1980s nuclear fright — and massive rallies in the United States and Europe demanding nuclear disarmament.

But what about, say, Joe Biden’s national security adviser Jake Sullivan? He was still 12 years old when the Berlin Wall came down in 1989.

As our own Jim Rickards is wont to remind us, the risk right now with Ukraine lies in escalation.

“No one starts out wanting or expecting a nuclear war,” he explains, based on decades of personal study going back to the 1960s.

“Instead, two sides confront each other, one side escalates, the other side retaliates and so on until one side or the other is backed into a corner and uses tactical nuclear weapons as a last resort.

“In some scenarios, the side least likely to use nuclear weapons actually launches the first strike because they expect the other side to do so imminently.”

American leaders thoroughly understood this dynamic during the Cold War. Between that understanding, and a fair amount of luck, the Cold War never went thermonuclear.

But nowadays, “experts and policymakers either forgot or never learned the nuclear warfighting doctrines” that defined the Cold War. “The result is that they may be sleepwalking into a new nuclear war without even realizing it. The way this happens is through escalation.

“The war in Ukraine has been on an escalatory path since the beginning,” Jim goes on.

“Russia has retaliated with reductions in natural gas shipments, diversion of oil from Europe to Asia, limits on grain exports and other tactics.”

But the revelation that Ukraine is crawling with CIA spies and NATO commandos? That takes escalation to a whole other level. 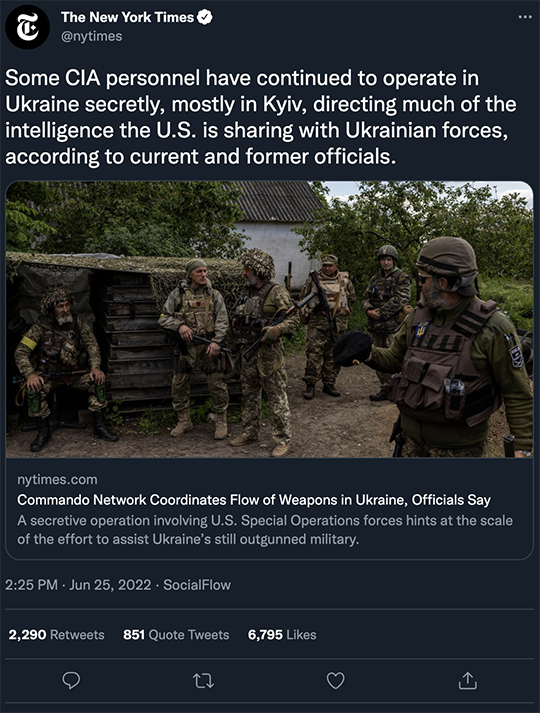 Over the weekend, The New York Times published a story about a “stealthy network” of American and European undercover operatives and special forces that aim “to speed allied assistance to Ukrainian troops.”

So much for Joe Biden’s promise about no American “boots on the ground” in Ukraine, huh?

“There may be a sliver of daylight between the CIA operatives there today and the U.S. special forces that left Ukraine after Russia invaded,” writes Kelley Beaucar Vlahos for the Quincy Institute — “but given the circumstances, is it a meaningful one? Is it all about who is pulling the trigger?

“The Russians may not see the distinction and consider this news as further evidence that their war is more with Washington and NATO than with Ukraine.” That’s escalation.

In a recent speech, Professor Mearsheimer broached “the possibility that nuclear weapons might be used in Ukraine and that might even lead to a nuclear exchange between Russia and the United States.”

“If American policy succeeds and the Russians are losing to the Ukrainians on the battlefield,” he said, “Putin might turn to nuclear weapons to rescue the situation. The U.S. director of national intelligence, Avril Haines, told the Senate Armed Services Committee in May that this was one of the two situations that might lead Putin to use nuclear weapons in Ukraine.”

And if Moscow looks as if it will prevail? “In that event, there would be great pressure on the United States and its allies to get even more deeply involved in the fighting.

“It is not likely, but certainly possible that American or maybe Polish troops would get pulled into the fighting, which means NATO would literally be at war with Russia. This is the other scenario, according to Avril Haines, where the Russians might turn to nuclear weapons.”

We’ll wrap up this depressing line of thought with Jim Rickards: “Every day brings the world closer to nuclear war. No one in a position of Western leadership seems to be paying attention.”

As June begins stumbling to a close, the major U.S. stock indexes are adding to yesterday’s losses.

“‘Stocks are now back to fair value, so you should buy.’ The basic logic goes something like this: Sure, speculative stocks got ahead of themselves and traded at prices that were way too high. So it’s logical that these stocks will now pull back to more reasonable levels. And that pullback has led to a bear market.

“But now that the market has pulled back, stock prices are in line with their historical averages. So you’re paying a fair price to own shares of these growth companies.”

Zach says that’s fine as far as it goes — but what’s to stop the pendulum from swinging all the way to the other side?

“Before this bear market is over, we may see growth stocks move well below what many people consider to be reasonable prices,” Zach suggests. “And that’s when you’ll have some great opportunities to buy.”

Of course, that’s the time you won’t want to buy because they’ll look so beaten down. But that’s the way market psychology works…

Crude is up more than 1.5% on the day to $111.26 — but traders are missing critical data with which to make their decisions.

Last Wednesday, the Energy Department failed to publish its weekly inventory numbers. It’s not the first time, but in the past such delays lasted only a few hours and always came with an explanation. This time, the agency left everyone in the dark, and for days on end.

Finally, an explanation was forthcoming yesterday: “On Friday, June 17, we discovered a voltage irregularity, which caused hardware failures on two of our main processing servers… We have replaced the affected hardware and are in the process of transferring data from our backup systems to new servers.” 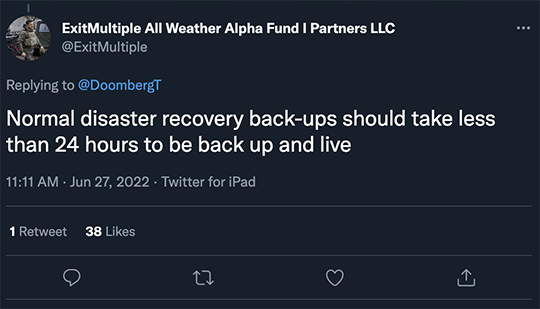 Meanwhile, news on the sidelines of the G7 summit in Germany confirms our suspicions: Saudi Arabia has no ability to open the oil spigots wide and make up for the loss of Russian oil in Western markets.

“I had a call with MbZ. He told me two things. I’m at a maximum, maximum [production capacity]. This is what he claims. And then he said [the] Saudis can increase by 150 [thousand barrels per day]. Maybe a little bit more, but they don’t have huge capacities before six months’ time.”

Uh-oh. As the Reuters newswire reminds us, “Saudi Arabia and the UAE have been perceived as the only two countries in the Organization of the Petroleum Exporting Countries (OPEC) with spare capacity to boost global deliveries that could reduce prices.”

At present, Saudi Arabia is producing 10.5 million barrels per day. The kingdom talks a great game about ramping that up by another 2 million… but if Macron is to be believed, the actual figure isn’t even 10% of that.

Yeah, that $5 national average for a gallon of gasoline? We might not be done with it yet…

From the turning-lemons-into-lemonade department… how about turning an invasive crab species into whiskey?

That’s what a creative distillery in New Hampshire is doing… 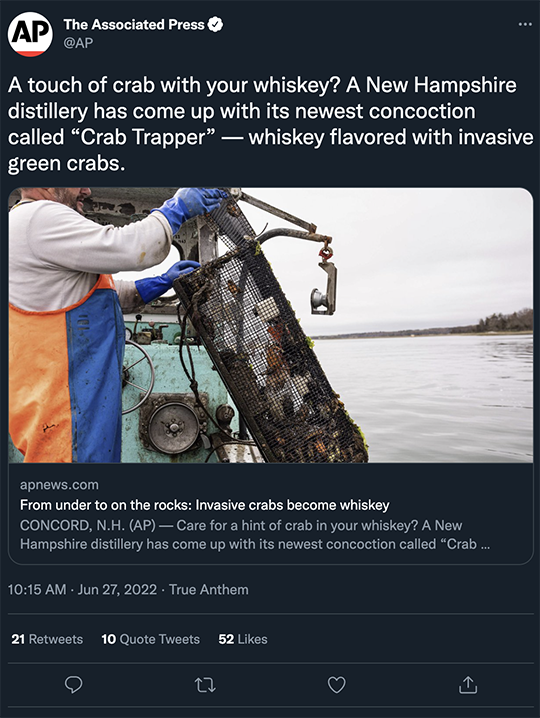 “Searching for a fresh flavor, Tamworth Distilling cast its eye to the sea,” reports The Associated Press. “Distiller Matt Power said the company heard about the problems caused by the invasive green crabs from the University of New Hampshire Extension’s Gabriela Bradt.

“The crabs, which came over on ships from Europe in the mid-1800s and landed on Cape Cod, have taken the region by storm. These saucer-size crustaceans with a murky green color have decimated the area’s marine ecosystem, outcompeting native species for food and shelter.”

Take about a pound of these green crabs, boil them into a broth, mix with alcohol, distill the whole thing… and you’ve got a bottle of whiskey.

To the mailbag: “I marvel at the stupidity of our Western leaderswho forced a Russian default on bonds that Russia was willing and able to pay off in full,” writes one of our longtimers.

“The Western holders of the bonds have taken a huge hit, while it is likely that Russia will — through third party cutouts — buy back those bonds at a huge discount.

“Defaulted bonds are still bought and sold, but discounted to pennies on the dollar, as the buyers are taking their chances on ever getting paid. In this case, Russia could buy her own bonds and write off the debt for those same pennies on the dollar. And the same could be true for other bonds that are soon coming due as the current holders dump them to avoid greater losses.

“Thus, once again, the Western sanctions will hurt the West, while providing a big net benefit to Russia.”

“I’ve always said that the one law our government can pass with impeccable perfection is the law of unintended consequences,” another reader chimes in.

“Thus, it really should come as no surprise that a coordinated effort by the major governments of the Western world to impose ‘devastating’ sanctions on Russia would basically trigger a never-ending game of Whac-A-Mole of unintended consequences in every corner of world economics, welfare, energy, manufacturing and probably everything else.

“At precisely what point in time did someone (God?) flip the switch and say, ‘OK, the idiots now officially are in charge!’?”

The 5: We don’t have a good answer to that question… but even the corporate media are smart enough to see through some of this nonsense.

The G7 summit broke up with no agreement on new oil sanctions. Biden proposed a byzantine “price cap” scheme we won’t even try to describe here.

The Washington Post saw the problem from the get-go: “The oil price cap, which was floated by the United States ahead of the meeting, is complicated by the fact that oil is sold on the open market and Russia could look elsewhere for buyers.”