A Florida city is partnering with a gaming software company to become the “physical center” between the real world and the metaverse.

Can you guess which Sunshine State city? We’ll give you a beat to think about it…

Yes, the city that visionary Walt Disney (and Mickey Mouse) built — Orlando, Florida — is teaming up with Unity Technologies to produce a digital replica of the city.

“Using 3D technology to map out infrastructure, real estate, talent availability, climate change and other scenarios,” says The U.S. Sun, “a ‘digital twin’ of the metro area will be created.”

“As the future of the web takes shape,” says Cathy Hackl, chief metaverse officer for Futures Intelligence Group, “it’s clear the Orlando region is becoming the MetaCenter that will have a huge impact in the short- and long-term evolution of the metaverse.”

Plus: “With 550,000 college students within a 100-mile radius of Orlando, there is no comparison in the country when it comes to young talent,” says Orlando’s Mayor Buddy Dyer. “We are training the workforce of the future.”

Our science-and-technology authority Ray Blanco concurs: “The metaverse is expected to be one of the next big trends in technology, a sci-fi fantasy whose time has come.”

According to former Amazon head of content Matthew Ball, the metaverse is “a persistent, synchronous and live universe that spans both the digital and physical worlds with total inclusion.”

Which sounds pretty woo-woo… So to put some handholds on that definition, an article at Business Insider says the metaverse “refers to a future version of the internet where, instead of accessing the web through laptops and phones, people use virtual-reality and augmented-reality devices to enter a virtual space.”

As Ray notes, the concept of the metaverse originated in Neal Stephenson’s sci-fi novel Snow Crash, published in 1992. “In that year,” says Ray, “the internet was just starting to become a force, with only a few million users worldwide connecting, mostly through glacially slow telephone dialup.

“Many people had never even heard of the internet yet, but investors and innovators were able to create fortunes as the global network ramped up to its current level of close to 5 billion human users.

“Just like what happened with the internet in the 1990s, the technology necessary for the metaverse is now getting very close to enabling massive mainstream adoption,” says Ray.

Much like The Six Million Dollar Man, the components to build out the metaverse are getting “better, stronger, faster.”

All well and good… but what are some real-world applications happening now?

Ray points to automakers, for example, that “save an estimated $3–5 million per model by building them in the metaverse first,” he says.

“Volkswagen is one of the major automakers” doing just that, “planning out everything from new car designs to assembly line layouts and worker training in order to spot problems and chokepoints before the first bolt gets installed on site.”

Add to that, autonomous driving, which “automakers are dumping massive resources into this year,” Ray says. “The Rand Corporation estimates that an autonomous vehicle will need to log at least 11 billion miles to be considered ‘road safe.’ That level of experience would take hundreds of years to reach in real-world testing. But it’s possible in realistic timeframes by exposing AI to simulated environments in the metaverse.”

Then there’s the work-from-home revolution: “Millions of us won’t be going back to our physical offices,” Ray says. “According to PricewaterhouseCoopers,” we won’t be “working online merely via 2D video feeds, voice and text-based communications — by 2030 we’ll be working in the metaverse.

“The metaverse economic transformation will be more than just our workspaces,” he adds, “social media and entertainment will be disrupted too, and things we haven’t even imagined yet will emerge.”

Ray concludes: “The metaverse is being billed as the next internet, and like the original internet, it will unleash massive innovation, creating vast fortunes for innovators and investors.

“The economic scale of the metaverse will be huge,” he continues. “Nvidia CEO Jensen Huang says that ‘the metaverse is going to be a new economy that is larger than our current economy.’”

Perhaps CEO John Riccitiello of software company Unity Technologies — whose company is partnering with Orlando — put it best: “The word ‘metaverse’ is plural. We don’t think that one company will represent the metaverse.”

Meaning? There will be a multitude of companies building out the space, and Ray’s got a pulse on several of the metaverse’s original architects, including his list of “Top 7 Metaverse Plays for 2022.” Take action today… get ahead of the crowd… and claim your own stake of the metaverse.

Also not great? The major economic number of the day… June’s ISM Manufacturing Index registered 53 points — down 3.1 from May’s reading, and firmly below the 54.5 economists anticipated. It’s the lowest reading, in fact, since June 2020. (Yes, 2020.) Perhaps most concerning, new orders dropped below 50 for the first time since May 2020. While we’re not at a recessionary inflection point quite yet, things certainly don’t look promising.

“I’ve tracked the ups and downs in biotech going back 30 years,” says Ray Blanco, riffing on more from the science-and tech field. “The current biotech bear is the worst I’ve ever seen…

“Biotechnology companies peaked well ahead of the general market when they set all-time highs in February 2021,” he says. “Biotechs also led the decline eight months ahead of the major indexes, losing more than 64% of their value by May of this year.

“But if history is any guide, buying biotech now should produce big gains in the months ahead,” Ray says.

“In May, the small cap-rich S&P Biotechnology Select Industry Index (SPSIBI) bounced off a level that served as support for the sector during both the COVID-19 sell-off in early 2020 as well as the end-of-year biotech swoon in 2018. In both cases,” he says, “biotech roared back.

“This year, we saw that same level tested twice, with biotechs bouncing back from this price level in May, and then again after a general market sell-off in June.” Since then, biotechs have resuscitated over the last two weeks.

“It’s looking like the bottom is in,” Ray says, “which makes right now one of the best times ever to buy quality biotech names.”

According to the Cato Institute: “Under the Bank Secrecy Act” the U.S. government increases “financial surveillance… by silently increasing the activities banks must report in their effort to counter financial crime.”

The law requires banks to report unusual (i.e. suspicious) activity, including when a customer makes a cash transaction of $10,000 — either a deposit or withdrawal. “Thousands of reports are filed every day against Americans for merely using their own money,” notes Cato analyst Nicholas Anthony.

“So what does inflation have to do with the reports?” asks Anthony. 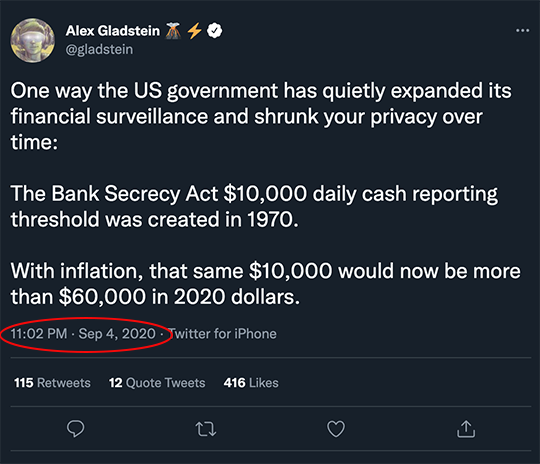 The dollar in 2020 compared to today’s dollar… ugh.

While $10,000 was a high threshold in the 1970s — when said amount could purchase “two brand-new Corvettes” — it’s not comparatively high in 2022. “The threshold should have been designed with an adjustment for inflation so it would change to reflect changes in the economy,” Anthony says.

“Each year with inflation,” his article closes, “is another year that the government is granted further access to people’s financial activity.”

And as we mentioned earlier this week, the government is set to seize even more access with a vehicle Jim Rickards has labeled “Biden Bucks.” Click here so you can safeguard whatever’s left of your financial privacy.

“A global helium shortage is affecting all sorts of consumers,” says an article at The Harvard Crimson, “ranging from the National Weather Service, to party-supply stores, to physicists at universities around the world.”

Harvard’s Dean of Science Christopher W. Stubbs estimates the university’s own helium supply is running 50% below normal levels. “That has forced [us]… to greatly curtail the experiments that rely on that as a cryogenic liquid,” Stubbs says.

This is the fourth such helium shortage since 2006, currently precipitated by shutdowns at some major helium producers, as well as the war in Ukraine since Russia is the world’s fourth-largest helium producer, according to data from Statista.

We’ve followed helium shortages for years at The 5. Most recently in 2019, we mentioned the gas is critical for more than just Harvard experiments (no offense to the Ivy League institution). We listed MRIs, nuclear magnetic resonance and semiconductors among the industries that rely on helium.

Plus, it’s anyone’s guess whether helium balloons will be available for your Fourth of July celebration. 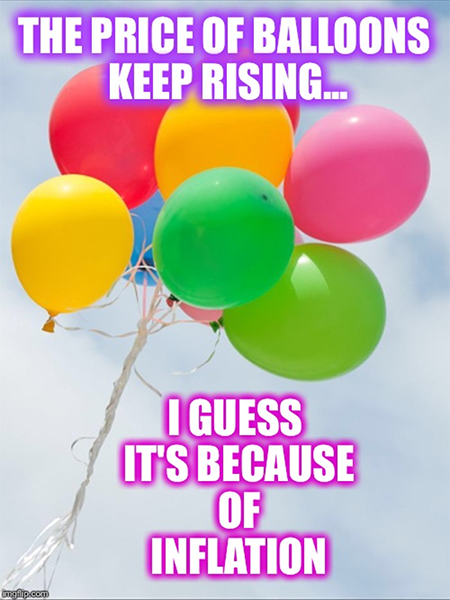 “I strongly suspect our vaunted ‘leaders’ did see Russian default coming and fully understood the consequences,” notes a dedicated reader.

“I expect they already have a backstop/bailout planned. It will likely get played down by the normally fear-mongering media (bad optics so close to a midterm elections), and the whole catastrophe will be quietly taken care of with another global financial meltdown averted. At the expense of bondholders, possibly stockholders and taxpayers, à la Cyprus 2012–13.

“I surmise the markets have come to expect it too, and that’s why the total lack of concern at the announcement of Russia’s (Western-engineered) default.

“Look forward to The 5 every day!”

The 5: A Cyprus-style “bail-in” would be hard to execute quietly. Maybe we’ll have Jim Rickards weigh in on that possibility next week…

Despite the negative news cycle, try to enjoy family and friends this Fourth of July weekend. We’re taking off Monday — the market’s mercifully closed — but we’ll be back Tuesday. Take care!