Bigger Than the Bestselling Drug in History

So said a leading cancer researcher a while back to Paradigm Press’ science-and-wealth authority Ray Blanco.

“His comment,” says Ray, “points to the unfortunate fact that sometimes, a drug that seems to work great in animal models doesn’t translate well once it reaches human testing. But animal models are still crucial as an early step in testing an experimental drug before trying it in humans.

“It’s not just the bioethics behind reducing risk as much as possible before using volunteers. The data gleaned are valuable and can help tailor a more successful human trial.

“It’s also true that if a drug doesn’t work well in mice, it will probably never move into humans. So it’s a necessary first step, and a drug that works well in animal models has a better chance of working well in people.”

Which brings us to an important progress report in the battle against arthritis.

Ray’s been following the fates and fortunes of a tiny biotech firm that’s trying to accomplish what the bestselling drug in history — Humira — cannot.

Yes, Humira generates $20 billion in annual sales for the pharma giant AbbVie. But as Ray has told us for a while now, Humira can also produce serious side effects — “like damage to the sheaths of nerves or liver damage.”

Too, Humira tends to weaken the immune response against infection and developing cancers. And because it’s an antibody therapy, it’s delivered by injection — much less convenient than an oral therapy.

This tiny biotech company, meanwhile, is working on an arthritis drug that aims to sidestep all of those problems.

And while this drug is well along in Phase 2 human trials, results have just come in from a mouse study that underscores the drug’s potential. Not just for arthritis, but for many of the scourges of aging.

Conducted by the Johns Hopkins University School of Medicine, the study’s findings were published earlier this month in the prestigious peer-reviewed Journal of Gerontology: Biological Sciences.

The study compared two sets of mice. One was given drugs already known to extend life spans. The other the drug being developed by this tiny company.

That’s a big deal. Ray still believes in the potential of this drug to create generational wealth — much like when Medivation developed a prostate cancer treatment in 2006. By the time Pfizer acquired the firm a decade later, investors were sitting on a gain of 11,534%.

Best of all, this company’s shares recently pulled back under Ray’s buy-up-to price. Now’s your chance to get in as close to the ground floor as possible on what could be the biotech story of the 2020s — as Ray explains when you follow this link.

The stock market’s rally these last two months is clearly bumping up against a ceiling this week.

And there’s no refuge in the bond market — prices are down, yields up. The yield on a 10-year Treasury note is back to 2.99% this morning, the highest in nearly a month.

Gold is — ugh — about to crack below the $1,750 support level that proved to be resistance most of last month. (Physical gold in the form of a 1-ounce U.S. Eagle is just a hair over $1,900 at Hard Assets Alliance.) Silver is less than a dime away from breaking below $19 again. Crude is holding the line on $90 a barrel.

Cryptos are trading in sympathy with stocks, but the downside is more extreme: Bitcoin and Ethereum are both down 7⁠–⁠8%. Ahead of next month’s “merge,” Ethereum is back below $1,700.

➢ In what could easily become a daily feature here — layoffs and hiring freezes at larger corporations — we see the online furniture retailer Wayfair is cutting 870 jobs in the face of falling sales. That’s nearly 5% of the workforce. Management says inflation is leaving consumers too cash-strapped for discretionary purchases like furniture. The Street is not taking the news well — Wayfair shares are down over 17% on the day.

With earnings season more or less over and no economic numbers today, trader chatter has turned to — what else? — the Federal Reserve.

“St. Louis Fed chief [James] Bullard said he is considering support for another large interest-rate increase at the central bank’s policy meeting next month,” The Wall Street Journal tells us rather breathlessly.

Big whoop. Regional Fed presidents have precious little sway on the Fed’s Open Market Committee. For the time being, the only pertinent statement on Fed policy comes a week from today — when Fed chair Jerome Powell delivers his annual speech to a conference of central bankers in Jackson, Wyoming.

And even that won’t have much predictive value. A year ago, Powell still thought inflation was “transitory” and he refused to entertain raising the fed funds rate from near-zero levels: “With substantial slack remaining in the labor market and the pandemic continuing, such a mistake could be particularly harmful.”

Barely four months later, the Fed was publicly setting the table for the current rate-raising cycle — the steepest in decades.

Another day, another major industrial plant in Europe closing its doors for lack of affordable electricity.

This time it’s a big aluminum smelter in Slovakia run by Norway’s Norsk Hydro. The company says it’s facing several headwinds, not least of them “high electricity prices, which show no signs of improvement in the short term.” The plant will close by the end of September.

The news comes right after the giant commodity firm Trafigura announced plans to mothball a smelter in the Netherlands that supplies 2% of the world’s zinc.

Sanctions against Russia, and Russia’s continued efforts to choke off natural gas supply to Europe — they’re the gift that keeps on giving.

However, a major crack is emerging in the “united” front among U.S. allies: Japan has resumed imports of oil from Russia.

Colleague Sean Ring of our sister e-letter The Rude Awakening spotted this development in the Asian press. So far, Western media are oblivious.

Japan’s finance ministry released a statement on Wednesday confirming the resumption of oil imports in July — after they’d fallen to zero in June.

Yes, they’re still down 65.4% from a year earlier… but because Western sanctions have scrambled the global oil flow and prices are much higher now, the cost of Russian oil imported by Japan grew 45.1% year over year.

“That’s what idiotic sanctions do for you!” says Sean. Conclusion: “Japan isn’t willing to put its economy at risk for misguided Western policy.”

How soon, we can’t help wondering, before European leaders start to crack, too?

Maybe by the first frost? Or maybe sooner if the Atlantic hurricane season heats up and the flow of liquefied natural gas from the U.S. Gulf Coast is suddenly shut off?

For the record: Lawyers for the woman who’s been battling busybody Florida regulators for five years are appealing to the U.S. Supreme Court.

The state went after health coach Heather Kokesch Del Castillo on the grounds she’s functioning as an “unlicensed dietitian” — something she had zero issues with when she lived in California a few years earlier, before her husband was transferred. (A licensed dietitian snitched to the state of Florida, go figure.) 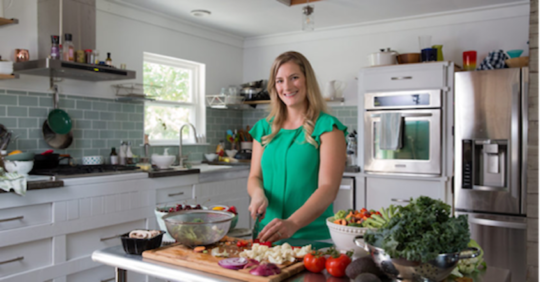 Heather Kokesch Del Castillo: Looks like a real menace to society there…
[Institute for Justice photo]

The good folks at the Institute for Justice took up Del Castillo’s case on free-speech grounds — pointing out there’s no practical difference between her counseling individuals about nutrition versus publishing her advice in a book.

In February, a federal appeals court rejected that argument. Now the Institute for Justice is asking the Supreme Court to step in.

“This case illustrates that occupational-licensing boards are America’s newest censors,” says IJ attorney Paul Sherman. “In cases across the country, boards charged with regulating everything from engineers to psychologists to dieticians have decided that the power to license an occupation gives them the right to tell ordinary Americans to shut up. It is time for the Supreme Court to make clear that it gives them no such thing.”

To the mailbag: “Indeed the quoted prices are not consistent or realistic!” writes a reader who likes our decision to occasionally quote the going prices of physical precious metals in addition to the “paper prices.”

“As a Canadian I/we have to deal with the currency exchange as well,” he adds. “This really complicates the prices of the metals and is very frustrating.

“Holding your nose and buying is not a good strategy but there are no other options. We also have limited dealers, which keeps the price higher. My Canadian peso is not our friend!”

“We are holding our precious metals in a depository,” another reader writes. “Do you think we need to be concerned with government search and seizure, or government calling in these metals as they did in the 1930s?”

The 5: Not particularly, though we understand the concern.

For years, Jim Rickards has told us there’s nowhere near enough gold in private hands to make confiscation worth the government’s while. The bigger threat, he’s said, is some sort of windfall profits tax. But that can’t be imposed instantaneously by executive order; all taxes require an act of Congress — so you’d have time to react.

Whatever you do, don’t keep your metal in a safe-deposit box at a bank. As Jim has long warned, the time you’ll want that metal the most will be the time when there’s a bank holiday — and you can’t get access.

P.S. Pink Floyd co-founder Roger Waters took time out from his U.S. tour this week to protest in front of Justice Department headquarters in Washington, D.C. — calling on the feds to drop their case against WikiLeaks founder Julian Assange… 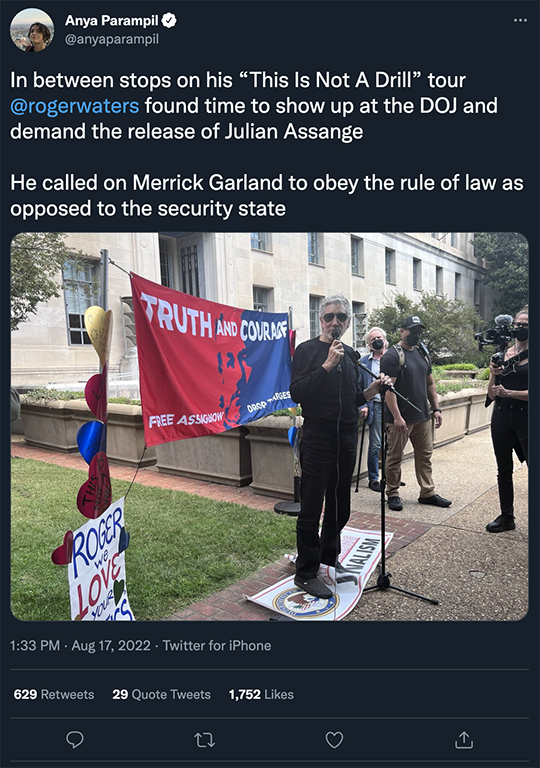 Assange rots in a London lockup awaiting extradition to the United States — in a case that will mark the biggest test of free speech and a free press in our lifetimes.

Yes, the stakes are that high — as we laid out in The 5 just over a year ago.