“The Shift Is Inevitable”

One step closer to a central bank digital currency (CBDC)? Or, if nothing else, its precursor…

On Monday, the Fed’s vice chair Lael Brainard announced that the payment system FedNow — in development for 10 years now — will go live next year. 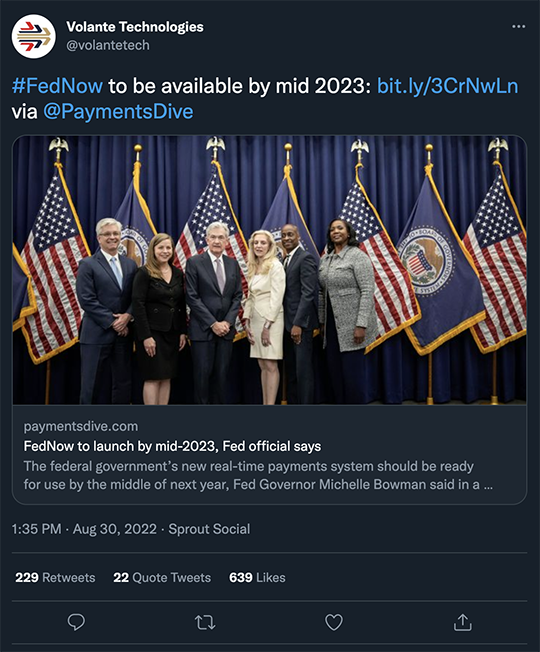 “The shift to real-time payment infrastructure requires a focused effort,” says Brainard, “but the shift is inevitable.” Gotta say, don’t love the sound of that!

[Not loving the sound of this either: “FedNow is noteworthy within the crypto industry because it has been touted as an alternative to a central bank digital currency (CBDC),” says an article at Crypto Briefing.

“In particular, Federal Reserve Governor Michelle Bowman stated on Aug. 17 that FedNow ‘addresses the issues that some have raised about the need for a CDBC’… As such, FedNow will almost certainly precede the completion of any CBDC efforts in the U.S.”]

But since we haven’t touched on the Fed’s scheme before, here’s an outline…

“The FedNow Service is an instant payment service to provide all depository institutions in the United States with access… in near real-time every day of the year, including weekends and holidays,” says Regulatory Oversight.

“A liquidity management tool will facilitate the transfer of funds between financial institutions and businesses to support liquidity needs related to payment activity within the Service.”

Consumers and businesses, however, wouldn’t be eligible to access the FedNow Service directly.

Nevertheless, Brainard makes it seem so: “Having the capacity to manage money in real-time could help households avoid costly late payment fees or free up working capital for small businesses to finance growth.”

Umm… Cash App, PayPal, Venmo, Zelle? Your bank’s app, whereby you can transfer funds electronically? But whatever… Let’s reinvent the wheel! Then again, the Fed is notorious for sending mixed signals…

“The history of the Fed is that they look for the wrong signals in the wrong places,” says Paradigm’s macro authority Jim Rickards. “They can be dead wrong.

“At his Jackson Hole conference speech last Friday, Powell made it perfectly clear that inflation was Job One and he would not stop raising rates until inflation was back near the 2% range where it belonged in the Fed’s view.

“Getting from 9% where inflation was last month to 5% would be quite an accomplishment,” he says, “but that’s still a far cry from 2%.

“In other words, the Fed is a long way from giving the markets what they want,” says Jim.

“Stocks began to correct based on this bucket of cold water in the face,” he adds. Plus: “Signs of economic growth are not as clear or strong as markets want to believe…

“The Fed almost never gets things right,” Jim says. “Historically, they look for the wrong signals in the wrong places.” Meaning? “The pivot party was premature,” he concludes. “Reality has returned.”

Turning to the market on this final day of August, the major U.S. indexes are in a holding pattern.

“Plain-old silicon has ruled the day for over 50 years, creating trillions in wealth as it became the medium of choice for the creation of ever-more-powerful computational devices.

“But silicon isn’t the end-all in the world of semis,” says Ray. “While silicon’s properties have made it perfect for circuits ranging from smartphones to supercomputers, these are generally low-voltage, lower-power applications. There are other rapidly growing applications where silicon falls short.

“When a semiconductor has to deal with high levels of electrical energy, silicon can’t take the heat… literally. Moreover, it isn’t as efficient as other emerging semiconductor materials in dealing with higher voltages and currents.

“Electric vehicles and charging stations — plus solar and wind power — require power-control electronics that can handle greater loads,” Ray adds. “Their inverters, motors and chargers all work better when other chemistries like gallium nitride (GaN) and silicon carbide (SiC) are used instead.

“These alternative semi materials are proving to be a growth driver for companies like Wolfspeed Inc.,” he notes. “Formerly known best for helping drive the LED lighting boom under the name Cree, Wolfspeed is a U.S.-based supplier for these emerging semiconductor markets.

“Recently, the company opened the world’s biggest automated silicon carbide semiconductor fab due to an increased need for extra capacity. The company’s chips are being used in more and more designs.

“Moreover, with the recent passing of the CHIPS Act at the federal level, and localities eager to incentivize job-creating expansions in their own locales, U.S. companies like Wolfspeed should have less trouble expanding further.

“Further billions are being spent to revamp our energy and transportation systems,” Ray concludes, “and the applications for alternative semiconductor tech will continue to grow.”

“As part of the American Rescue Plan, third-party e-commerce platforms like eBay… will now have to issue a 1099-K tax form to anyone with a total revenue of more than $600 on their websites,” says The Daily Dot.

“The lower threshold will give the Internal Revenue Service additional oversight on online transactions and prevent businesses and individuals from skipping out on taxes for profit they may have been making.”

All of this is a complete about-face on the part of the IRS; yes, online sellers were always required to report money they made via platforms including eBay… but “there’s been little oversight for accounts with revenues under $20,000 — until now,” The Daily Dot notes.

The government is looking to recapture an estimated $600 billion in lost revenue annually… which goes a long way to explain the “robust attack” via an amplified IRS goon squad.

“It’s not a stain. It’s a statement,” says online consignment retailer thredUP about its new collaboration with Heinz ketchup.

“Heinz and thredUP are teaming up to make a mark on fashion.” The retailer is releasing a collection of “157 secondhand streetwear and designer pieces,” including unmistakable ketchup stains… 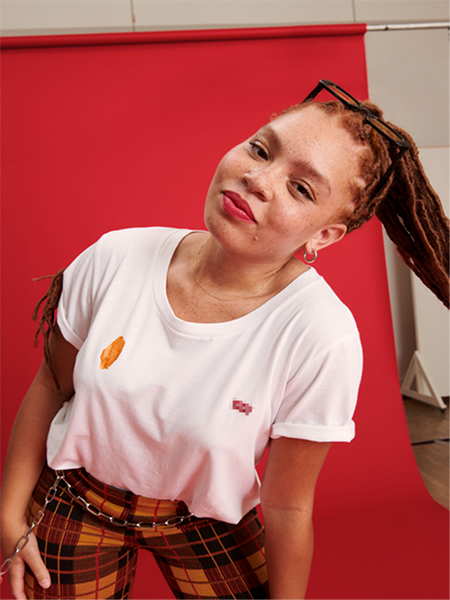 “We’re thrilled… to create the first-ever line of ketchup-stained secondhand clothes, celebrating reuse. This collection offers a unique way for fashion risk-takers and food lovers alike to participate in the circular economy, while doing good for people and the planet.”

According to the company’s website, all proceeds will go to nonprofit Rise Against Hunger.

“Adding to the ephemerality of this bespoke collection,” says Food & Wine, “a Heinz representative confirmed the stains are actual Heinz ketchup, meaning they will likely wash away over time.”

Driving the point home, thredUP says: “A stain isn’t a reason to get rid of clothes, it just adds flavor to your ‘fit!”

“There is one idea that does away with tax filing for individuals and saving a bunch of money,” a reader writes per our recent IRS coverage.

“No withholding taxes from paychecks and no filing returns required. The tax is collected at the point of sale and passed on to a much smaller IRS, or, better yet, directly to the U.S. Treasury.

“There are no deductions, no special interest favors, just one straightforward flat tax rate for everyone.

“This system gained quite some interest and support around 2000, but predictably politicians saw their power diminished and so a great idea died. But it may be time to revive it.”

The 5: Two decades or so later, the idea has been revived via the Republican-backed FairTax Act of 2021 which was introduced in the House on Jan. 4, 2021… where the bill’s languished ever since.

According to Steve Hayes, president of Americans for FAIR Taxation: “The FAIRtax bill… would be the greatest transfer of power from the government back to the people ever.”

Which leads us to believe… it’ll never happen. But maybe it’ll be trotted out again in another 20 years?

“What is still possible and was proposed by former presidential candidate Steve Forbes,” says a second reader today. “A flat tax!

“Of course, that even seems a remote chance because it could lead to a complete dismantling of a gigantic bureaucratic clusterf***.

“Heaven forbid we reduce government… But the thought of putting bureaucrats on the ‘dole’ (unemployment), however, is entertaining.

Take care, readers. We’ll be back with another episode of The 5 tomorrow.

P.S. This all came together very quickly, so apologies for the short notice, but…

We’ve organized an urgent Zoom call tomorrow covering the energy crisis in Europe — and how it’s going to hit home in the United States.

While Russia reels in record oil revenue, Americans are paying the most for natural gas in 14 years. What companies and sectors are in the most danger? And where do the profit opportunities lie?

This live Zoom call is set for tomorrow morning at 11:00 a.m. EDT. Remember Zoom has a 10,000 participant limit — and slots are filling quickly. Click here to make sure you reserve your slot right now.