The day after Labor Day marks an unofficial end to summer… the return of Wall Street pros from their Hamptons hangouts… and a general “back to reality” zeitgeist among the population at large.

Among the unfortunate realities to be confronted: The 2022 midterm elections are exactly nine weeks from today — elections that “will have a huge impact on investors,” says Paradigm Press Group’s macro maven Jim Rickards.

“The days of separating politics and economics are long gone,” he adds. “Now it’s all connected.”

Out of respect for paying subscribers to Rickards’ Strategic Intelligence, we won’t share Jim’s forecast for which party will control the House and Senate when all’s said and done — not least because much can change between now and Election Day.

[OK, we’ll tell you this much: Control of the Senate will come down to five seats — three held by incumbent Democrats, one held by an incumbent Republican and one open seat. If you want to stay on top of all the twists and turns, and how they’ll affect the markets, best get yourself a Strategic Intelligence subscription right away.]

What we will do today, though, is share the potential “wild cards” that Jim says could alter the election calculus — and the markets — dramatically.

“Individual wild cards can have low probabilities of appearing, but if there are enough of them and you give the game enough time, the odds are close to 100% that one of them will appear.

“The math behind this is called a Bernoulli distribution. We’ll spare you the equations; it’s enough to say that there are a lot of wild cards in the deck and it’s a near certainty one will turn up. Most market analysts don’t think that way, but we do.”

With that in mind, here are three wild cards to monitor…

Last week Strategic Intelligence readers got the full lowdown on how the midterms are likely to shake out. Two more detailed election briefings are due before Election Day. Follow this link and you too can be in the loop.

OK, what was it Jim was just saying there about “the pressure” in Europe “to regain Russian energy supplies”? 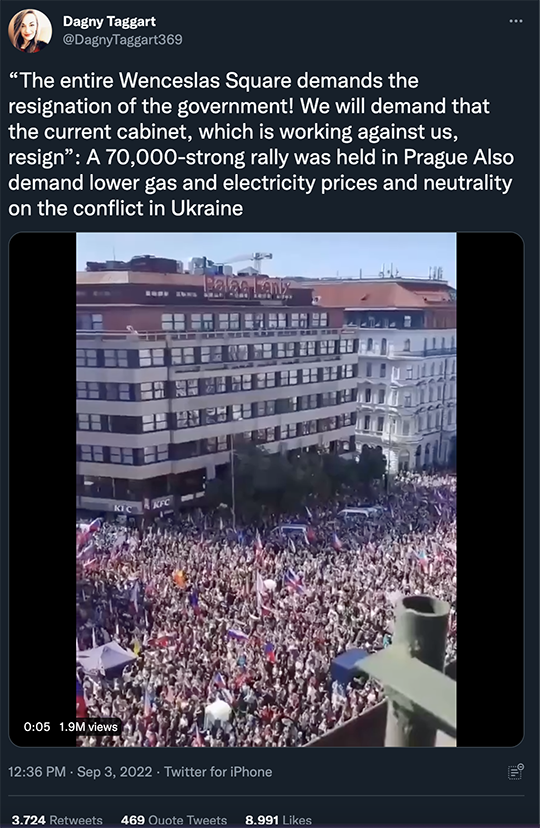 That was Saturday in the capital of the Czech Republic — a massive rally bringing together right-wingers and left-wingers, all denounced by the uber-Establishment prime minister as Russian dupes. (And this is long before winter sets in — the high temp in Prague Saturday was 70!)

Meanwhile in the United Kingdom, on the same day the new prime minister was selected, one of the most popular daytime TV chat shows was… well… 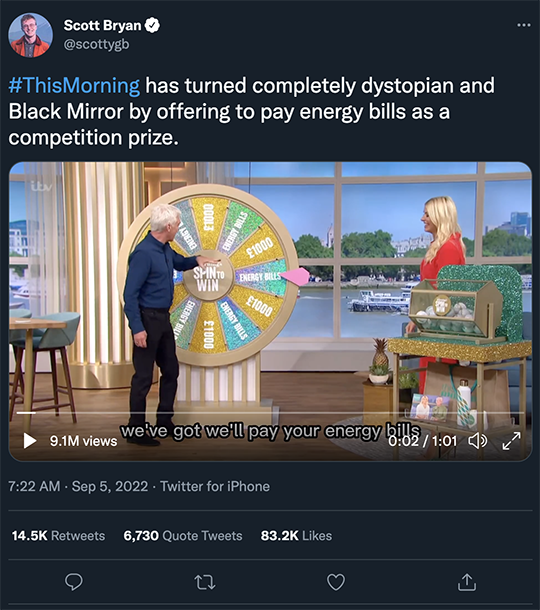 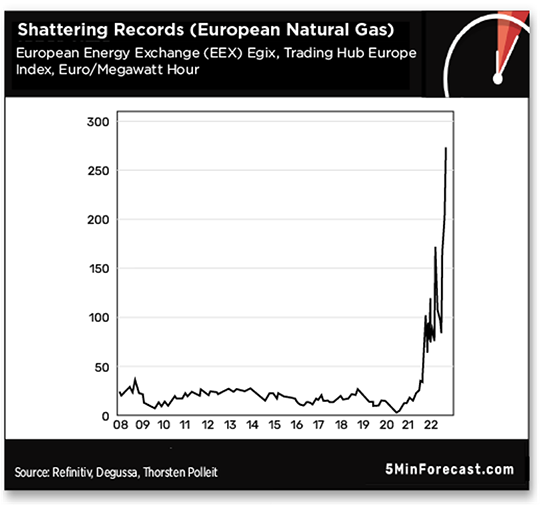 When we left you on Friday, Russia had just shut off the last remaining gas flowing through its Nord Stream 1 pipeline to Europe. Russia’s state-owned gas company Gazprom said there was an oil leak in some critical equipment — even furnishing the following visual evidence. 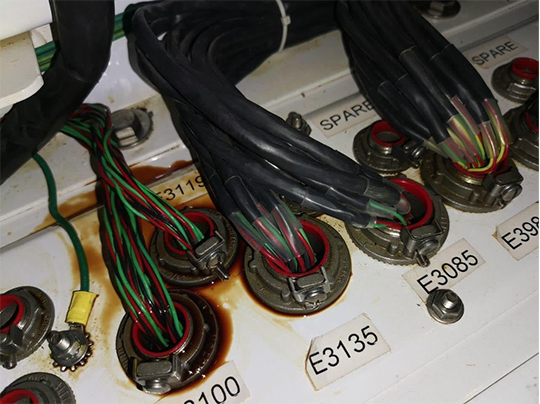 Uhhh — presumably fixable with a few 10-cent gaskets or something?

Of course, European leaders are again accusing the Kremlin of “weaponizing energy.” But as Libertarian Institute news editor Kyle Anzalone quips, “The West is now concerned about not having enough access to Moscow’s economy.”

With that, the euro has once again reached parity with the U.S. dollar and the Financial Times is fretting about the potential for a “Lehman moment” — summoning the seminal event of the 2007–09 financial crisis.

“Kristian Ruby, secretary-general of Eurelectric, which represents more than 3,500 European utilities, said the ballooning sums that power producers were required to post as collateral because of extreme price volatility in wholesale energy markets was of ‘grave concern.’”

Reminder: Some of those power producers surely have American creditors — who themselves owe substantial sums to still other American creditors. This daisy-chain of debt is why the salmon-colored rag is invoking the specter of Lehman.

But for the time being, Europe’s political establishment still figures the whole thing can be papered over with paper money. The face of Europe’s Green movement, German foreign minister Annalena Baerbock, made that much clear… 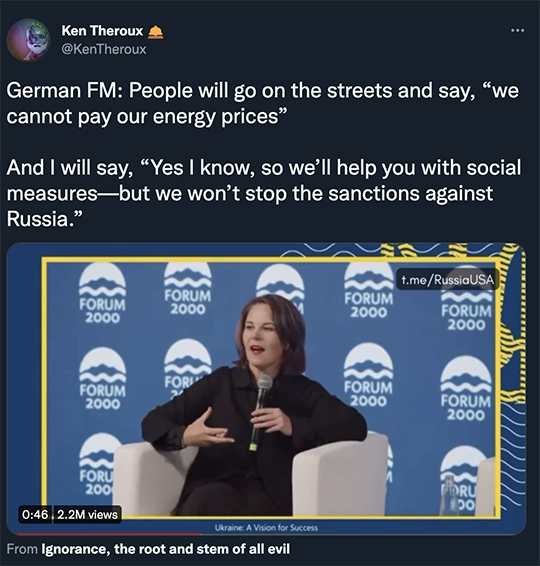 Yikes. This isn’t your father’s European Green movement of 40 years ago, motivated almost entirely by the cause of nuclear disarmament. These modern-day Greens are devoted to two utterly delusional causes — an abrupt abandonment of fossil fuels and regime change in Moscow.

And they have a lot of kindred spirits in the halls of power here in the United States. Just sayin’…

All that turmoil notwithstanding, the U.S. stock market is holding its own as the post-Labor Day season begins.

The rally that was in progress when we wrote you on Friday fizzled by day’s end and turned to more losses. But as we write this morning, the major U.S. indexes are in the green, if not by much.

Crude is rallying after the OPEC+ nations agreed yesterday to a surprise production cut. A barrel of West Texas Intermediate is up to $87.41. Brent, the global benchmark, is at $93.51.

As Middle East Eye reports, “The move is a rebuke from Saudi Arabia, the leading member of OPEC, to Washington’s call for its Middle Eastern ally to increase production at a time of rising inflation and Western sanctions on Russia’s energy industry.”

We interrupt our dirge of doom for at least a moment’s respite of good news: Global food prices have fallen for five straight months.

The United Nations’ Food and Agriculture Organization says its food price index has drifted down to 138 — lower than before Russia’s invasion of Ukraine, but still 10 points higher than a year ago.

The FAO attributes the drop to an agreement between Russia and Ukraine allowing the resumed flow of grains out of Ukrainian ports. Also helping matters is that the fall harvest in both Russia and North America is shaping up to be better than expected.

“How do you lose track of a 350-pound felon who has cancer and can barely walk?” quips Washington Post reporter Craig Whitlock on Twitter.

How indeed? “The military contractor known as ‘Fat Leonard,’ the mastermind behind the worst public corruption scandal in U.S. Navy history who was three weeks away from being sentenced in the case, is on the run,” according to TheSan Diego Union-Tribune.

Convicted in 2015 of swindling the Navy out of at least $35 million in overcharges, Francis forestalled his sentencing for years because he agreed to be a cooperating witness against other people charged in the scheme.

With his sentencing finally set for later this month, he’s now gone. The Marshals have issued a be-on-the-lookout notice to airports and border crossings.

He shouldn’t be that hard to spot, but then given the feds’ performance in this case to date, who knows?

“Dave, when I first heard about the so-called oil price cap, my first thought was that the Biden ideologues had fired what they ignorantly thought was their ‘shot across the bow.’

“It’s clear now that ideology was never part of the plan; they are just buck-naked stupid. These people ought to be picking up litter on the side of the highway.”

The 5: Hey, that’s an insult to the good people who volunteer for “adopt a highway” duty!

“I have a nit to pick with your usage of the word ‘crypto,’” a reader writes.

“You are using ‘crypto’ as a catchall word for a technology and an application of it. I think that for the average nontechnical person, reading or hearing that word is automatically associated with digital currencies. What you are writing about are two different but related things: digital currencies and the blockchain technology they are built on.

“For example, last Thursday James Altucher said, ‘A lot of people say that crypto has solved no real problems yet. That it’s all about hope and speculation.’ You then listed nine items to support the argument. One was a digital currency and the other eight were applications built on blockchain technology.

“Personally, I have no interest in crypto (digital) currencies, but am invested in companies that are creating or using blockchain-based applications. Because of this bias, when I see ‘crypto’ used as a stand-alone word, I tend to just move on to the next thing.

“To be clear, I think blockchain is an important new technology that will one day be widely used. I just wish people would disambiguate the use of the word ‘crypto.’

”P.S. I have been reading The 5 Min. Forecast since it started. I think you guys do a great job of aggregating useful information for your customers. I also enjoy reading the occasional opinions of the editors and the feedback provided by your readers. Thanks for all you do.”

The 5: Thanks for the compliments. We understand your concern, but we’ll also turn the question back on you: If you’re “invested in companies that are creating or using blockchain-based applications”… does that mean you own the digital tokens issued by those companies?

If so, most people would interpret that to mean that you own digital currencies, even if you profess no interest in them.

Either that or we’re talking past each other because the field of decentralized finance is still so new!

“Thank you for providing the best laugh I have had in a long, long time,” writes a reader who appreciates our link to the classic political cartoon depicting the absurdity of the 1040 tax form.

“I am sitting here gasping for air! Especially since my hubcaps were stolen recently (guess I checked ‘yes’).

The 5: Was that before or after your tires were rotated?