The biggest thing to hit crypto in years happens this week — and the mainstream is starting to sit up and take notice. 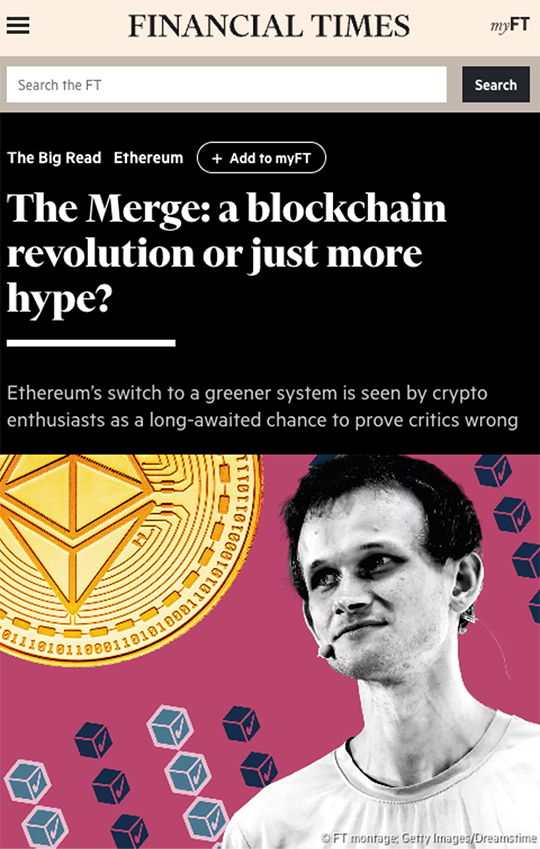 “If there is one thing the crypto community has in good supply, it’s promises. In the relatively short history of digital assets — starting with Bitcoin in 2009 — evangelists have trailed a list of innovations that, they say, could solve inflation, revolutionize business or provide a financial lifeline to people living under authoritarian regimes around the world.”

But with the big Ethereum “Merge” likely to take place this week, “The faithful now have an opportunity to prove their critics wrong.”

Spoiler alert: The critics will be proven wrong. Paradigm Press Group’s resident crypto evangelist James Altucher just went live this afternoon with his Crypto Disruption Summit. If you missed it, you can catch the replay right now at this link.

“Here is one important part of the Merge you should know about,” says James.

“One of the reasons for the Merge is to reduce energy consumption by going from ‘proof of work’ to ‘proof of stake.’ Don’t worry about what those terms mean. But the idea is that the electric bill for Ethereum miners (the people who validate transactions to make sure there is no fraud) will go down 99%.

“Every day, Bitcoin miners and Ethereum miners (until the Merge for Ethereum) have to SELL 80% of the coins they mine to pay the electric bill. That’s a lot of selling. Particularly for ETH, which has more transactions per day than Bitcoin.

“All of that selling disappears the day of the Merge. Less selling is just one of the reasons Ethereum will go up post-Merge.”

Maybe you’ve heard crypto enthusiasts talk about something called “smart contracts” — but you don’t have a sense of what they are or how they’ll transform the world.

“Crypto creates an ‘Internet of Value,’” says James. “Anything that has actual monetary value can ‘speak’ (i.e. be traded) to each other. When people fully use smart contracts (and most are made by Ethereum) they will start creating ‘tokens’ out of anything of value and trading them.

“Right now, you can’t easily trade a small piece of your house for AAPL shares or bonds or frequent flyer miles or Uber rides or coupons for Big Macs or tickets to a concert. There’s no exchange that can do that. There’s no common language that all value speaks.

“But crypto is that common language.”

Here’s a concrete example, one that borrows from a type of “currency” you’re probably familiar with — frequent flyer miles.

“Let’s say Uber makes an UberCoin that is mined by people who ride a lot. ‘Proof of Ride.’ Let’s also say UberCoin can be used to buy more Uber rides.

“Why would Uber do that? The same reason airlines do frequent flyer miles. They borrow from future profits (the eventual rides that Uber riders will buy with UberCoin) to create marketing incentives for people to ride now. Isn’t that like frequent flyer miles? Yes, it is. But now there is one important difference.

“Once this starts to happen, and it will happen, I can now trade these UberCoins for other coins that are completely unrelated,” James goes on. “I can trade them for ANYTHING that has value and trades on a decentralized finance (DeFi) exchange.

“For instance, a recent college graduate can make a coin based on ‘10% of his earnings each year for the next 10 years.’ He can create that coin and sell it on a DeFi exchange. Maybe he wants to raise money to pay down student loan debt. And people will speculate on that coin because maybe he has more potential than his coin suggests. The coin has value because it is backed by his future earnings.

“Now I can trade it for the UberCoin described above. Or a stock. Or a ticket to a sports event. Or Bitcoin. Whatever!

“Every company will be making smart contracts, the way every company eventually made a website.”

And again, most smart contracts have Ethereum as their foundation. That’s why the Merge is such a big deal… and James believes if you simply buy and hold ETH, you’ll do quite well.

But if it’s a life-changing fortune you’re after… well, James addressed that in detail moments ago during his just-completed Crypto Disruption Summit. The replay is loaded on our servers and ready for you to watch right away. Click here to get started.

Nearly every asset class is beginning the new week on the rally tracks.

The S&P is up 12% from its June lows… but Paradigm’s retirement-and-income specialist Zach Scheidt is wary: “Bear market rallies can suck you back into the market with plenty of optimism only to disappoint you a week or two later.

“If you want to take a small portion of your retirement savings and bet aggressively on stocks trading higher, I’ve got no problem with that. You may just knock it out of the park with a few well-timed positions. And that home run can help grow your retirement wealth and meet your financial goals.

“But please do not bet the farm on this bear market rally.

“Keep the majority of your wealth in solid dividend-paying stocks that will hold their value in good times and bad.” As Zach mentioned here a few days ago, his favorite sectors right now are energy and defense.

Precious metals are staging a decent little rally, too: Gold is up to $1,730 and silver is only a quarter away from $20. 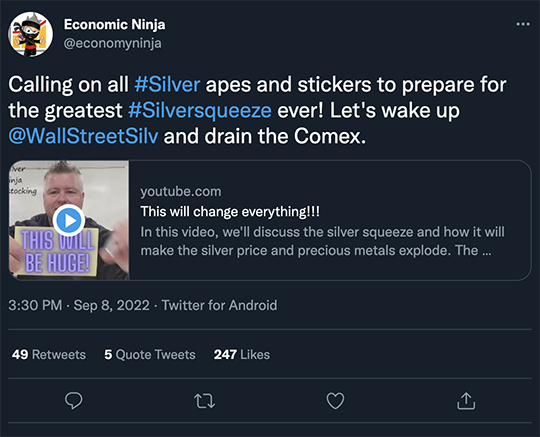 During the initial “meme stock” frenzy of early 2021, a splinter movement of millennials fed up with Wall Street’s shenanigans tried to pull off a short squeeze in silver. Didn’t work, and we wouldn’t bet the farm on it working this time either — but we wish them well.

In any event, the yawning gap between the “paper silver” price and the price of real metal in your hand is starting to narrow. Our friends at Hard Assets Alliance will sell you a U.S. Silver Eagle today for $33.34. That’s still a huge spread over the spot price, but it’s a buck less than it was two weeks ago.

Bonds are rallying too — prices rising, yields falling. The yield on a 10-year Treasury note is back to 3.3%.

➢ No major economic numbers today, but we’ll remind you as a public service that Friday is the deadline to head off a possible nationwide railroad strike. We’ve been warning you about this for two months, and the mainstream is starting to wake up: The Hill reports the American Bakers Association fears a “devastating ripple effect,” seeing as 20% of U.S. grain shipments take place over the rails.

A year after the Biden administration’s mostly failed gambit for vaccine mandates… pockets of corporate America are quietly rolling back their own insistence on COVID shots.

Blame it in part on the labor shortage, reports the Axios news site: “Employers are trying to reduce any barriers to entry for new hires, says Erin Grau, co-founder of Charter, a media and services company focused on the future of work, who’s hearing from executives who are dropping their mandates.”

No, they’re not making a big deal about it. But noteworthy names include Goldman Sachs and Cisco. (Goldman’s New York locations must still comply with a city workplace mandate.)

Others are sticking to their mandate guns, however — including Google and Facebook. And a few companies — including Microsoft — didn’t see any upside to answering Axios’ inquiries one way or another.

No good deed goes unpunished, bank merger edition: You know how it’s good internet hygiene to make sure your logins include a special character — like $ or % or &?

Yeah, that’s not working out so well right now for customers of the former People’s United Bank in New England and New York state.

People’s United was recently absorbed by the regional colossus M&T — and the transition has been rough for customers like Michael Purcaro, the town administrator of Vernon, Connecticut.

After a Labor Day weekend switchover, he was unable to access his personal account. And he was far from alone.

As he explains to the Connecticut Post, “They said, ‘We see what’s wrong with your account. You and many others who had a special character in your username are having problems just like you’re having and we don’t know how to fix it, and we don’t know when it’s going to be fixed.’”

Rather than be locked out of his account indefinitely, Purcaro resolved the situation by going to an M&T branch where he agreed to be enrolled as a new customer. All his transaction history and statements with People’s were nuked.

“It’s not the customer service level we want to have or will have,” says M&T’s executive VP Mike Keegan, “but we’re getting there.” Sooner rather than later, he hopes…

“Dave, I appreciate the efforts you and your team do to educate the masses!” writes an enthusiastic reader.

“The points you made in your Aug. 30 edition [topic: how Western sanctions on Russia are backfiring badly] are spot on target!

“So many of my friends still have their heads in the sand. I would like your permission to forward this edition to some of my less literate friends.”

The 5: “Educating the masses” isn’t really our mission around here — we’re just happy if you learn something new and interesting each day.

But yes, by all means, feel free to forward any edition of The 5 to friends and family. And as a reminder, our voluminous archives — now 15 years’ worth — are archived for posterity at their own website.