“After the Merge, Ethereum will eventually do something called ‘sharding,’ which will increase scalability,” says our cryptocurrency-and-DeFi authority James Altucher.

“Sharding decentralizes the data so not every validator has to have all of the data,” he says, adding: “It’s a bit tricky.” Agreed… But for the sake of discussion today, we’ll attempt an overview — particularly in light of Ethereum’s Merge this week.

First, “sharding” was something Ethereum’s co-founder Vitalik Buterin forecast in November 2017, explaining his vision for Ethereum 2.0…

Sounds something like the metaverse, no? But in terms of how the Merge would make Ethereum more energy-efficient and decentralized, “Vitalik further mentioned” — again, almost five years ago — “he thought it was important that Ethereum could be run by a network of ‘consumer laptops,’” says an article at Protos.

At the same time, Buterin conceded that he didn’t know exactly how Ethereum 2.0 would play out…

“For now,” says Protos, “when ‘the Merge’ happens, it’ll simply [be] the change from the proof-of-work (PoW)… to the proof-of-stake (PoS) chain.”

James adds: “With PoW, the risk of validating a bad transaction is you have to eat your electricity costs,” he says, “but with PoS, you could lose your stake.

“Part of ETH 2.0 is that a validator of transactions risks losing its staked coins if it validates a fraudulent transaction. So some stakes will eventually get burned because of this.” (Which, as we’ve mentioned, might make Ethereum a deflationary asset.)

“Sharding may or may not occur in the future” James admits, “but it will probably reduce Ethereum’s supply slightly.”

“Potentially, scalability will increase demand because ETH can be used as a currency for transactions,” says James.

“Meaning, the risks go up,” he notes, “but that also means there is more incentive to triple-check any transactions being validated. So increased safety could increase demand for Ethereum.

“This is just speculation on my part,” James concludes, “but I think many people are waiting for ETH 2.0 to happen before investing.” Partly because the mainstream is just waking up to Ethereum’s Merge. “That said, interest has gone up significantly.”

And at long last, the Ethereum Merge is said to be taking place sometime tomorrow or Thursday. “It’s going to change everything,” says James.

If you recall, last month, President Biden did a little fancy footwork, making it seem as if inflation was at “zero percent” — Biden’s words — when really, he used CPI’s month-over-month inflation number rather than the commonly accepted year-over-year inflation.

Jim Richards, for one, wasn’t taken in: “White House policy is clear — if you don’t like the economic news, just change [data] to get whatever result you want.”

Anyhoo, the Labor Department issued its monthly U.S. Consumer Price Index (CPI) report, indicating inflation is still at 1970s-era levels — 8.3% in August year over year versus the 8.0% economists anticipated. And month over month? Inflation was up 0.1%…

Nevertheless, earlier today, Biden tap-danced around it: “Overall, prices have been essentially flat in our country these last two months,” he said… as he feted the so-called Inflation Reduction Act.

Whatevs. Even on a “core” basis — stripping out the steep costs of food and energy — prices on goods and services are up 6.3% since August 2021. And with Friday’s railway-strike deadline fast approaching, the outlook on inflation certainly isn’t improving.

And in further proof there will be no “soft landing” for the U.S. economy (or the stock market)… 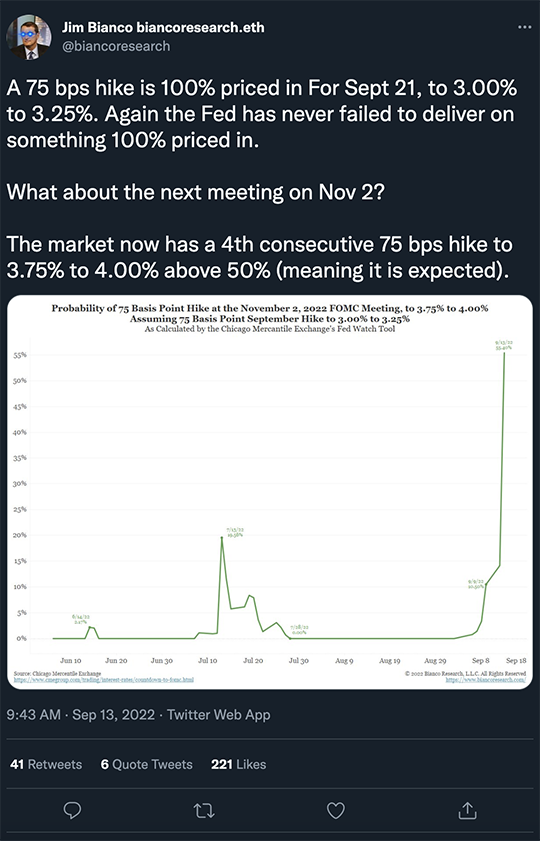 With that looming probability…

In sympathy with the Nasdaq, it’s a bloodbath at the crypto market: Bitcoin and Ethereum have both lost about 7%, down to $20,800 and $1,600 respectively.

For the other major economic number today, small-business owners are feeling ever so slightly encouraged, according to the NFIB’s Small Business Optimism Index, which rose to 91.8 in August from 89.9 in July. Albeit, inflation is still the No. 1 concern for business owners with quality labor trailing right behind.

“The small-business economy is still recovering from the pandemic,” says NFIB chief economist Bill Dunkelberg. The war in Ukraine, we note, with backfiring sanctions against Russia, can’t be helping matters.

“The new iPhone 14 will bring a global SOS feature — where you can send an emergency SOS from anywhere on the globe, delivered via satellite,” says Paradigm’s science-and-technology expert Ray Blanco.

“About a year ago,” he says, “rumors were swirling about the communications chips rumored to be going into the company’s next iPhone. According to the rumors, the new chipset would have the capability to support a communications band that could be used to talk to satellites.

“As it turns out, this was one rumor with a lot of truth,” Ray says. “The provider for these services will be Globalstar.

“At best, Globalstar will provide a very slow, anemic service using a piece of spectrum that, while reliable, isn’t good for much more than low-bandwidth applications like emergency SOS messages, containing basic location information [that] could take up to a minute to send.”

Ray and his team at his subscription service Catalyst Trader have been following the space-and-satellite beat for years now. And he’s landed on a superior solution to the problem Apple’s trying to solve; the name of the company, however, is reserved for his readers.

The contest is running every workday, now through the end of the year; employees who show up to work at one of GFP’s commercial properties can enter to win a pair of tickets by scanning a QR code on posters displayed in the buildings’ lobbies.

GFP Real Estate says it will give away 238 pairs of tickets, and lucky winners won’t be sitting in the nosebleed section either. “Those tickets include a seat at a VIP suite and complimentary drinks and food,” Bloomberg says, “with each pair of tickets valued at about $3,500.”

Because nothing says desperation like an $833,000 giveaway… just to get butts back into office chairs! Then again, who’s more desperate to get butts in seats? My money’s on the Jets — who made a poor showing against Paradigm’s hometown Ravens on Sunday. 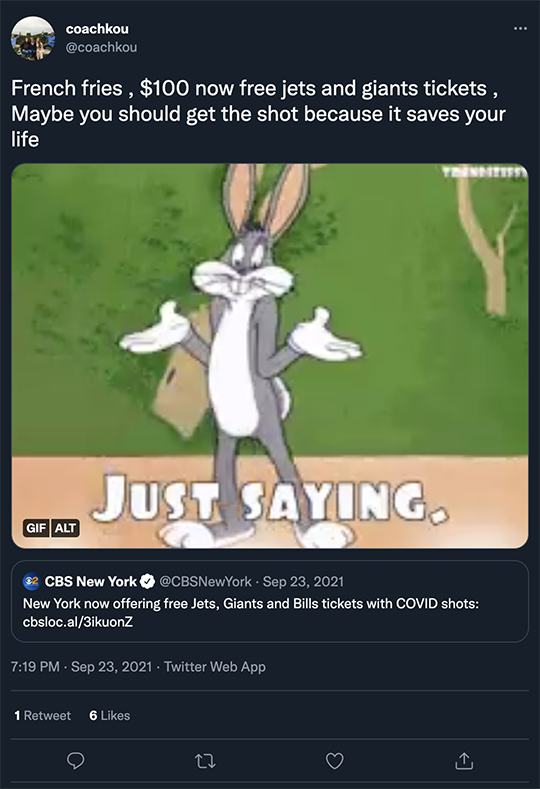 Heh, because that was so successful…

“Thank you for publishing my thoughts on the use of the word ‘crypto,’” a reader writes.

“The answer to your question on whether I own any digital tokens is no, unless you count the digital tokens in my bank account, aka U.S. dollars. (Sorry, couldn’t resist.)

“I own stocks in companies like IBM that are creating blockchain-based solutions in a number of business- and financial-related areas. At least one of those solutions is cryptocurrency related.

“Regarding your comment that we might be ‘talking past each other,’ I would say so. The problem is [crypto] is both complicated and still finding its footing.

“I imagine eventually shares of stock will be in the form of digital tokens that are held in my brokerage account. So I will eventually own tokens that show proof of ownership, but I am not quite sure how that will work or how secure it will be. Think CBDC and you’ll understand my concern.

“By the way, I am a semiretired computer programmer who has been looking at blockchain since it first appeared. I have been using open source-based solutions since 1993 when I first installed Linux on my personal computer.”

So in other words, our reader is focused on blockchain-oriented stock plays? It’s not a bad idea. (But check out the P.S. for The 5’s fulsome response.)

Take care of yourself… and we’ll be back with another episode of The 5 tomorrow.