But the big energy story for the moment remains the sabotage of both the Nord Stream 1 and Nord Stream 2 natural gas pipelines.

Paradigm’s own Jim Rickards weighs in on social media… 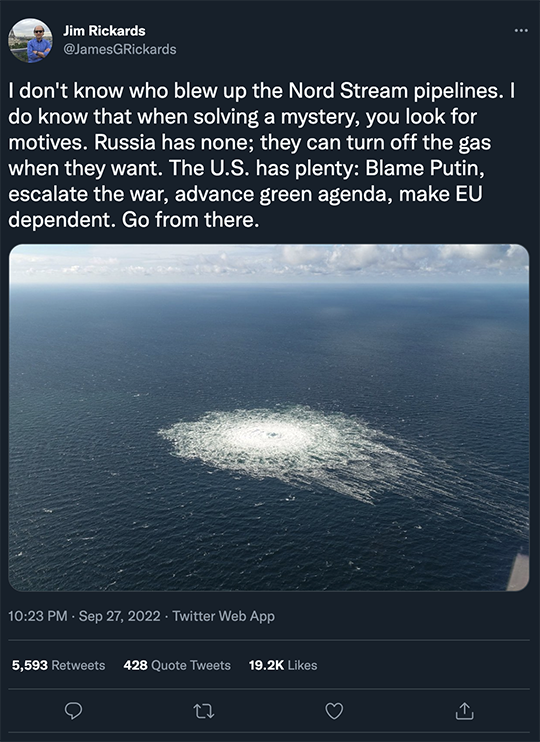 Besides, there wasn’t any gas being delivered through the pipelines anyway — thanks to Western sanctions and Russia’s tit-for-tat cutoff of gas supplies.

If the Russkies really wanted to do a number on Europe, they could have attacked the brand-spanking-new Baltic Pipe — carrying Norwegian gas to Poland and beyond — which coincidentally went into service within hours of the Nord Stream explosions.

For whatever it’s worth, the German newsweekly Der Spiegel reports that Washington had foreknowledge of an attack: The CIA tipped off the German government over the summer about saboteurs targeting one or both Nord Streams.

One thing’s for sure: Even if Western governments and Russia wanted to negotiate a Ukraine settlement, including turning the gas back on, that’s not possible now until the pipelines are repaired — which won’t be a quick fix.

[Just in: According to a German press report, the country’s security agencies fear Nord Stream 1 will be “unusable forever.”]

Meanwhile, don’t forget the long game, which our man in Europe Sean Ring mused on this morning in The Rude Awakening: “If German manufacturing married cheap Russian energy and sold those finished products to the Chinese middle class, well, you kind of don’t need America anymore.”

Can’t have that if you’re in Washington and you fancy yourself running the “indispensable nation,” can you? (That was the late Secretary of State Madeleine Albright’s repugnant term…)

We’re getting our “first whiff” of a 2008-style financial crisis courtesy of the United Kingdom — according to Jim Rickards’ senior analyst Dan Amoss during our editors’ weekly conference call this morning.

Before dawn on the U.S. East Coast, the Bank of England pledged to start buying government bonds at “whatever scale is necessary” to head off “material risk” to the U.K.’s financial stability.

As we mentioned on Monday, the pound hit all-time lows against the U.S. dollar. Currency traders wanted nothing to do with a government that was planning to cut taxes even as it continued spending like the proverbial drunken sailor.

Panic in the currency market translated to panic in the bond market… and so the Bank of England is stepping in to shore up the bond market. The irony of the central bank immediately flipping from monetary tightening to monetary easing? No one cares in the midst of a panic.

Love the timing, too: Treasury Secretary Janet Yellen said only yesterday she sees no sign of “erratic” financial market conditions.

After some back-and-forth, our editors said it’s too early to assess how this panic might spread across the pond — but we’ve got our eyes peeled and we’ll pass along any early warnings.

In the meantime, however, the U.S. stock market is rallying in what looks like an oversold bounce.

The Bank of England’s intervention is giving a lift to bond prices around the globe — pushing yields down. After hitting 4% overnight for the first time since 2008, the yield on a 10-year U.S. Treasury note is back to 3.77%.

Precious metals popped as soon as the Bank of England made its announcement: Gold is up nearly $30 as we write to $1,658. Silver’s back within a dime of $19.

Crude is up huge — over 4% — after the Energy Department released its weekly inventory numbers. A barrel of West Texas Intermediate is approaching $82 again.

Not sharing in the stock market’s good vibes today is Apple — which quietly issued what amounts to a global recession warning.

Bloomberg broke the story last night: “Apple Inc. is backing off plans to increase production of its new iPhones this year after an anticipated surge in demand failed to materialize, according to people familiar with the matter.”

The plan is to crank out 90 million editions of the iPhone 14 during the second half of this year — down from a previously planned 96 million.

Quite the change from earlier this month: “Apple had upgraded its sales projections in the weeks leading up to the iPhone 14 release and some of its suppliers had started making preparations for a 7% boost in orders.”

AAPL shares are down nearly 3% on the day. Some of Apple’s big suppliers like Taiwan-based Foxconn also took a tumble on the news.

When all’s said and done, history might mark last month as the start of the current recession.

We hesitate to revive the debate over the definition of a recession — a debate that manages to be both arcane and tainted by politics at the same time — but we perked up recently at an obscure economic data point that has an uncanny ability to call the onset of a recession.

It’s the Philadelphia Fed State Coincident Index. This index crunches four employment figures from all 50 states, generating an overall number that ranges between plus 100 and minus 100.

Numbers below plus 50 have marked the onset of every recession over the last 40 years. This index even pegged the onset of the brief pandemic recession with its February 2020 figures — the month before lockdown.

As a reminder, when we refer to recessions of years gone by, we rely on the start and end dates determined by the National Bureau of Economic Research. The NBER waits until well after the fact to declare a recession is underway — and that’s by design.

Still, the NBER’s recession dates have an uncanny tendency to sync up with glum readings from the Philly Fed State Coincident Index. Stay tuned…

“Moore’s law,” Ray reminds us, “is the long-standing trend in the semiconductor industry in which, every couple of years, the number of transistors packed on a computer chip doubles, and prices for chips fall by half in terms of chip performance.

“With prices rising on basic materials used to make those chips, however, the long-standing fall in prices on the end semiconductor products is breaking down — despite gains in performance.

“For a few hundred bucks, we walk around with computing power in our pockets today that it would have taken millions of dollars to buy not that many years ago. For decades, we’ve gotten used to getting more for less from the chip industry, and those improvements have fueled an economic boom running from the final decades of the 20th century down to our own time.”

And Nvidia CEO Jensen Huang says it’s all over now: “Moore’s law is dead,” he said a few days ago as he announced he’s raising prices on GPU chips — his firm’s bread and butter.

“Hundreds of billions of dollars are being invested in the U.S. and elsewhere to secure not only future capacity but also performance,” he explains.

“With the market downturn, many semis are becoming incredibly cheap. At today’s price, for example, you can buy Intel for under $30 and enjoy a dividend of over 5% in a company that is planning a big expansion under its current CEO, an expansion that will bring a new generation of semiconductor technology for manufacturing on our own shores.”

In addition, Ray says now is hardly the first time one expert or another has pronounced the demise of Moore’s law.

“Like clockwork, the competitive and cooperative semiconductor ecosystem comes up with ways to boost performance while lowering prices. In turn, the superior semiconductors enable a bunch of lucrative new applications that weren’t practical previously. I suspect we’ll see a repeat.

“Yes, eventually we will hit the physical limits to what we can build using silicon. As it is, the next generation of chips will be built at scales used to measure atoms and molecules. But off in the distance, emerging innovators are working on ways to one day replace ordinary silicon with other materials that promise greater potential performance.”

Supply-chain problems we hadn’t starting worrying about yet — a butter shortage.

Per The Wall Street Journal, the labor shortage has combined with lower dairy output at U.S. farms to bring the quantity of butter in cold storage to its lowest since 2017. The Department of Agriculture says availability is especially tight in the Northeast and West.

Foodie websites are already dishing out advice to cope as holiday baking season approaches: “Start by increasing your butter’s life span by storing it in the freezer,” says the Food52 website: “Frozen butter will stay good for at least several months, if not a whole year.” In addition, substitutes like coconut oil and olive oil are suitable for certain recipes.

To the mailbag, and an uncommon take on the recent topic of a fellow in Florida convicted of defrauding the Paycheck Protection Program to the tune of $7.2 million.

“While what Mr. Cisternino did was definitely immoral, all he did was acquire money that the federal government had no right to create in the first place.

“How is what he did any more wrong than the government creating money it has no right to have? Is it not fraud to debase the currency, which results in all Americans having a lower standard of living due to the resulting inflation? Yet the feds do it with impunity and with no repercussion.

“Thanks again for another 5 Min. update. Love you guys!”

The 5: Wait, you want to hold government actors to the same standard as us plebes? Radical, you are…