Even the Establishment’s newspaper of record is being shockingly circumspect — well, once you get beyond the main headline… 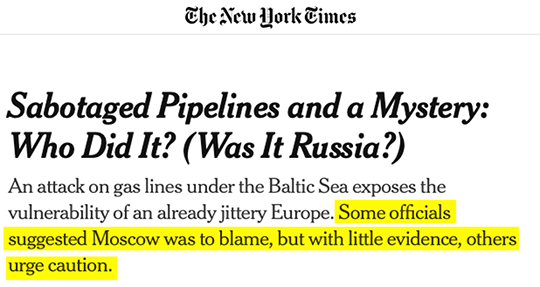 “Eventually, the divers will pull out debris — explosion residue. They’ll examine the steel, etc.,” says Paradigm Press’ energy-and-mining expert Byron King. Byron was able to dash off an email to us in between visiting a mine site on Colorado’s Western Slope and hopping aboard an airplane.

“The Baltic Sea is small and enclosed,” he goes on. “Full of listening devices after decades of Cold War. Heavily covered by radar.

“I suspect that a lot of people know a lot of things. There’s a story to tell.”

Just not yet, it seems…

If it was an American job — and we emphasize “if” — there may be a precedent of sorts with Stuxnet.

Stuxnet, you might recall, was a massive cyberattack targeting Iran’s nuclear energy program — first uncovered in 2010.

For a while, the U.S. government issued statements to the effect of “Who? Huh? What?” But by 2012 there was no point in keeping up the pretense and Washington acknowledged its role via media leaks: Stuxnet was developed “by the Central Intelligence Agency in conjunction with Idaho National Laboratory, the Israeli government and other U.S. agencies,” said The Wall Street Journal.

Might the same happen with Nord Stream in the fullness of time? 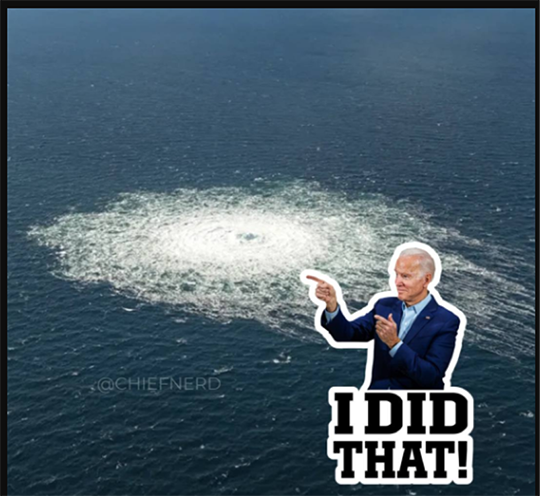 Unfortunately, Stuxnet had all manner of unintended consequences: After damaging several Iranian nuclear centrifuges, it spread and started attacking computers around the world — especially industrial control systems made by the giant German firm Siemens.

Whoever attacked Nord Stream 1 and 2 has also set off second-order effects — the extent of which we simply don’t know yet.

“Spiraling energy costs have forced steelmakers to cut output across Europe,” says the Reuters newswire, “threatening mass plant shutdowns some warn could be permanent in a sector that employs more than 300,000 and contributes tens of billions of euros to the region’s economy.”

As an example, there’s the plight of Aperam — a stainless steelmaker in Belgium that’s shut down production despite giving a nod to the green agenda with four wind turbines and over 50,000 solar panels: “The company is now paying for energy in a month what it used to pay in a year and has idled a facility that would normally be melting stainless steel scrap and converting it into giant slabs, employing about 300 workers.”

If circumstances don’t change soon, “We will see a deindustrialization of sectors like ours,” says Aperam’s European chief Bernard Hallemans, “and Europe will also, for base metals like ours, become dependent on imports.”

At least a few Europeans are starting to see the writing on the wall. Look at what started trending on Twitter in Germany yesterday: “Sanctions Against USA.”

There’s a line of thought — call it conspiracy theory if you like — that says Washington is orchestrating all of this on purpose to keep Europe compliant and dependent.

Goading Russia to invade Ukraine, imposing sanctions that hurt Europe more than Russia, blowing up the pipelines — it’s all aimed at wrecking Europe’s capacity to forge friendships with Russia and China and chart a course independent of Washington. Too, a de-industrialized and dependent Europe would necessitate the reindustrializing of America.

We don’t buy it. It gives the control freaks and power trippers too much credit for foresight. They’re not playing 11-dimensional chess here. They’re making it up as they go along, oblivious to unintended consequences and second-order effects.

Speaking of making it up as they go along… the proxy war in Ukraine might well become a full-on war between Russia and the NATO powers within days.

The Russian government will sign a decree tomorrow, annexing four regions of Ukraine.

Presumably once that happens, Ukraine’s military will continue to conduct attacks in those four regions. Only now, Russia would consider it an attack on its own territory.

Mr. Doctorow is an American political analyst and author based in Brussels. He keeps tabs on Russian-language media targeting domestic Russian audiences.

He noticed a distinct shift in tone on the nightly talk shows earlier this month: No longer is Russia fighting Ukraine, it’s fighting the entire NATO alliance.

And annexing those four Ukrainian regions is central to the task. “The merger of the Russia-occupied Ukrainian territories with the Russian Federation will mark the end of the ‘special military operation.’ An SMO is not something you conduct on your own territory, as panelists on the Evening With Vladimir Solovyov talk show remarked…

“It marks the beginning of open war on Ukraine with the objective of the enemy’s unconditional capitulation. This will likely entail the removal of the civil and military leadership and, very likely, the dismemberment of Ukraine.”

Again, Doctorow expects Russia to declare war on Ukraine within two weeks — another step in the escalation process Jim Rickards has warned us about for months now. And to be clear, we’re talking about escalation toward nuclear war.

If you’re a newer reader — or even if you’ve been around for a while and could use a refresher — we went in depth on escalation in early March, in early May and in late June.

So much for the relief rally. The U.S. stock market is giving back all of yesterday’s gains and then some.

Bonds are selling off along with stocks: The good vibes from yesterday’s big intervention the Bank of England didn’t last. The yield on a 10-year Treasury note is back to 3.75%.

In light of our recent pledge to take the time now and then to contrast the price of precious metals futures with the price of real metal in your hands, we bring the following to your attention… 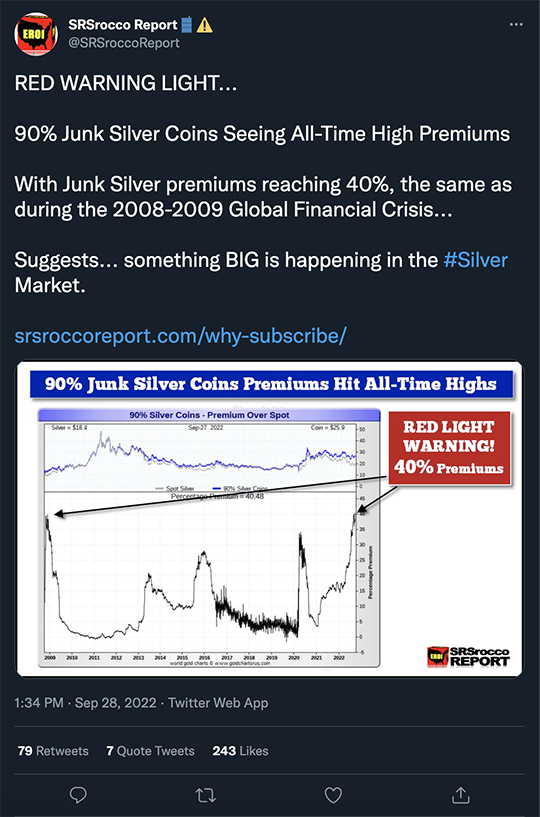 “Junk” silver, if you’re unaware, is the term for pre-1965 dimes, quarters and half dollars that have 90% silver content.

To be available at 40% over the spot price is… well, remarkable. But some observers of the precious metals space say the potential is there to go much higher. (If you can get them at all.)

Jim Rickards says conventional wisdom has it all wrong when it comes to the Federal Reserve’s plans through year-end.

Conventional wisdom says the Fed will raise short term interest rates another 0.75 percentage points in early November — and 0.5 in mid-December.

So why is it wrong? Go back to Fed chair Jerome Powell’s press conference after the Fed’s Open Market Committee meeting last week, says Jim: “Powell used the FOMC’s Summary of Economic Projections (SEP, also known as the ‘dots’) as a frame for his forecasts. He said the median for year-end suggests another 125 basis points of rate increases for 2022.

“Taken literally, this suggests a 0.75% rate hike in November followed by another rate hike of 0.50% in December.

“No sooner had Powell said this than he went on to say there’s a ‘fairly large group’ inside the FOMC who see only 100 basis points of rate hikes this year.

“Our expectation is that the Fed will actually go with the lower path, raising rates 0.50% in November and again in December,” Jim projects.

“Powell doesn’t want a fight with the ‘large group’ and doesn’t want to shock the markets just days ahead of the midterm elections. His reference to a possible 0.75% rate hike in November is just to set expectations and keep his options only.

“In any case, we’ll see it coming. Nov. 2 is still 34 days away. Powell will have plenty of time to make his decision and leak it to the press before the meeting.” 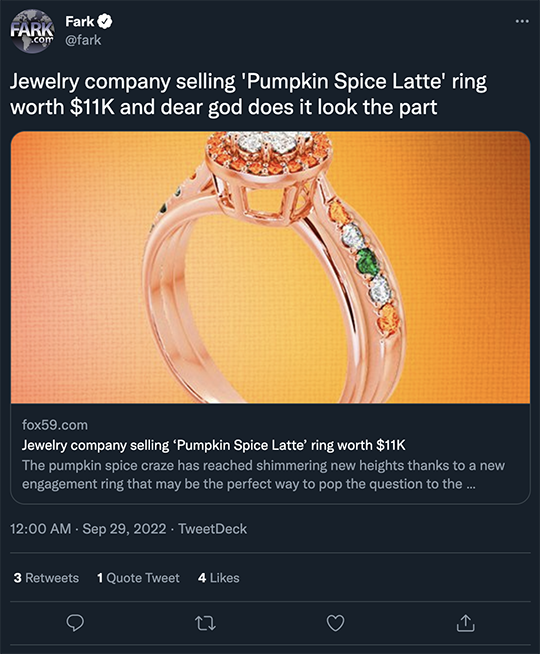 England-based Angelic Diamonds has designed a… yes, a pumpkin spice latte-themed engagement ring. It’s yours for 10,000 pounds — which, given the pound’s depreciation of late translates to a relative steal of $11,000.

From Food & Wine magazine: “The brand says that ‘every detail is inspired by pumpkin spice lattes’ starting with a rose gold band ‘designed to replicate the rib shape of a pumpkin’ with white diamonds, orange sapphires and emerald shoulder stones down either side. From there, the ring features a single ‘whipped cream shaped’ center diamond surrounded by a cluster of white diamonds and orange sapphires ‘set in a cup-shaped claw, reminiscent of a warm cup of pumpkin spice-goodness.’”

Betcha got a sugar rush just reading that, huh?

To the mailbag, where a reader accuses us of being one-sided with our hot take yesterday about evacuating a hurricane zone in an electric car.

“Yes, the power outage in Florida will leave electric car owners not able to charge their cars.

“However, that same power outage means that gas stations cannot pump gas into your ICE car.

The 5: It’s not a matter of filling up the gas tank versus charging an electric vehicle.

Rather, it’s a matter of whether you can make it to your bug-out location on a single tank of gas versus a single charge on an EV. Which would you prefer in a pinch?

Either way, whether it’s hurricanes or cyberattacks targeting the power grid, it pays to keep a full tank and all battery-powered devices charged. Oh, and a wad of cash…