“With inflation at 41-year highs, why isn’t the price of gold surging as it did during the last sustained bout of inflation in the late 1970s?” asks Paradigm’s macro veteran Jim Rickards. To answer that question, he points out two reasons inflation isn’t “saving the day” when it comes to gold’s price.

“The first is that not all inflation is created equal,” says Jim. “Inflation can come from the supply side (so-called ‘cost-push’) or from the demand side (so-called ‘demand-pull’). Those two drivers are not the same”:

“The U.S. is feeling the effects of cost-push inflation from the supply side,” he concludes. However? “This can morph into demand-pull inflation, as happened in the 1970s, initiating a scramble for gold.

“This process feeds on itself, and price pressures spread widely through the economy,” says Jim. “Gold is along for the ride…”

The second driver affecting gold’s price, says Jim, is “a global dollar shortage behind the curtain of the international monetary system.”

Now? “A remarkable feature of the U.S. economy at present is that broad money growth has come to an almost complete halt,” says Professor Tim Congdon of the University of Buckingham. 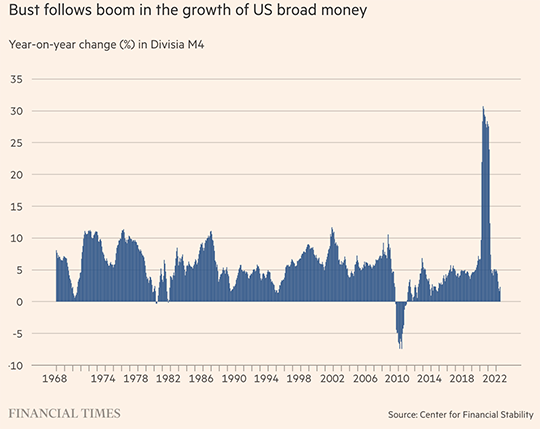 Looking at the chart, “using the [M4] numbers prepared by the Shadow Government Statistics consultancy,” says Congdon, “the quantity of money rose by less than 1% in the six months to July. With inflation proceeding at a rate roughly eight times higher, real money balances are being squeezed,” he says.

“There’s a lot to this story,” says Jim, “but here’s the short version: Derivatives positions require collateral. Treasury bills are the best collateral in the world, and Treasuries are denominated in dollars.”

And because we have a strong dollar now, Jim says, “a stronger dollar usually means a lower dollar price for gold and vice versa. At least in the short run, it really is that simple.

“That [dollar] demand really is inelastic, right up to the point where the global monetary system breaks as happened in 2007,” he says. “We’re getting closer to a replay of that catastrophe.

[“Hang in there: Gold will have its day,” Jim believes. “Either the cost-push inflation will morph into demand-pull inflation, or the monetary system will break down under relentless pressure for dollar-denominated collateral. Bad for the economy and markets generally… but good for gold.”

Now is the time, then, to buy gold — at a low entry point. We’ve long recommended Hard Assets Alliance as the go-to place to purchase your physical gold. (We support the company’s mission, to the extent that we even purchased a stake in HAA.)

Enjoy an online buying experience without any hangups with precious metals dealers. Click here to get all the details while you still have a chance to secure affordable rates.]

Checking on commodities, oil is nominally down to $81.20 for a barrel of West Texas Intermediate, but precious metals are getting a boost today. The yellow metal is up almost 1% to $1,681.90 per ounce while silver is up about 3%, above $19.

The big economic number of the day demonstrates just how “sticky” inflation is turning out to be.

The Commerce Department issued its reading of “core PCE” this morning — the Fed’s preferred measure of inflation. It rose from 4.7% in July to 4.9% in August.

Recall Jim Rickards’ analysis in The 5 last Friday — in which he described Fed chair Jerome Powell’s ultimate policy aim is a fed funds rate of about plus 1% after inflation.

With core PCE moving in the wrong direction, the Fed will have to jack up the fed funds rate higher and longer to reach its goal.

And yet… Wall Street forecasters cling to the notion that the 2020s bout of inflation is a one-shot deal brought about by the pandemic and lockdowns.

Thus, they continue to project that core PCE inflation will retreat to the Fed’s target of 2% before the end of 2024.

The more likely scenario? It’ll take a decade to get back to 2%, based on research out this month from Bank of America. Read it and weep… 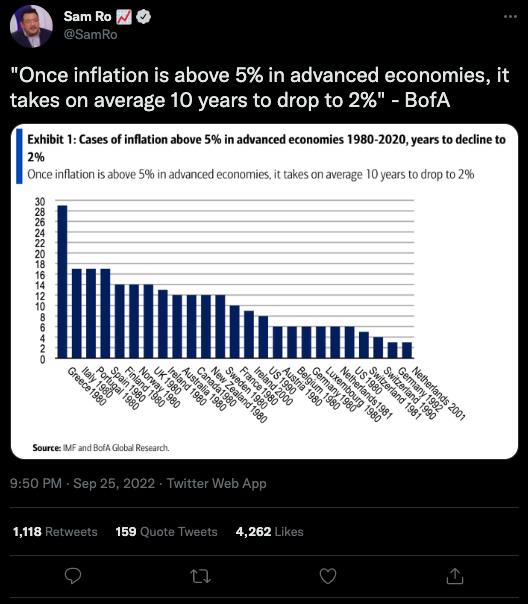 That said, let’s get the bad news out of the way first: “I’ve tracked the ups and downs in biotech going back 30 years,” says Ray, “and the current biotech bear is the worst I’ve ever seen.”

Recall, after “the biotech buzz of excitement led by COVID-19-related names,” he says, “these companies set all-time highs in February 2021.

“Biotechs also led the decline eight months ahead of the major indexes, losing more than 64% of their value by May of this year,” he notes.

“But if history is any guide…

“The small cap-rich S&P Biotechnology Select Industry Index (SPSIBI) bounced off a level that served as support for the sector [in 2018 and 2020],” Ray says.

“In both cases, biotech came back with a roar.

“This year we saw that same level tested twice,” Ray says, “once with biotechs bouncing back in May, and again after a general market sell-off in June.

“We’re getting a bit of consolidation right now, but biotech stocks look like they have plenty of room to run.”

Moreover, the FDA approved 50 new drugs last year — “a near record that includes many first-in-class therapies,” Ray says — and in 2022 so far, the FDA’s approved 24 more.

“After being stuck in a historic slump,” Ray closes, “we’re seeing signs pointing toward a turnaround that makes right now one of the best times ever to buy quality biotech names.”

With little fanfare Monday, the Canadian government relented on the COVID-19 vaccine mandate for anyone crossing the country’s border, including truckers.

According to the government’s website: “Effective Oct. 1, 2022, all travelers, regardless of citizenship,” will no longer need to provide health or vaccination status in order to cross the Canadian border. Mask-wearing, too, will be at the discretion of the individual.

We suppose Team Trudeau was backed into the decision, seeing as “the current COVID-19 Emergency Order-in-Council for border measures was set to expire on Sept. 30,” CBC reports. So not a minute to spare.

OOIDA urged Biden “to end the vaccination requirement for non-U.S. individuals seeking to enter the United States via land ports of entry at the U.S.-Mexico and U.S.-Canada borders.”

As well as citing Canada’s decision to relax COVID-19 rules, the association used the president’s own words — “the pandemic is over” — to call for a vax mandate rollback.

Call it a belated victory for protesters who occupied Ottawa for several weeks earlier this year?

You probably recall, in February, Trudeau took an unprecedented step — invoking Canada’s Emergencies Act of 1988 — and cracked down on anti-vaccine mandate truckers who, in late January, assembled in Ottawa to protest.

Here was the outcome, according to independent journalist Michael Tracey: “Trudeau and his Cabinet invoked emergency wartime powers, labeled protesters terrorists, denounced them for carrying out an ‘illegal occupation,’ eliminated due process to freeze assets, extolled the primacy of the economy and empowered police.”

And here we are…

After the government’s decision to relax COVID-19 requirements, some seven months later, we hope protesters feel a sense of vindication — at least it’s a moral victory? — but several demonstrators might be doing so from behind bars.

A group of Harvard scientists has been waiting almost two years for approval to conduct a climate-change experiment.

It’s called the Stratospheric Controlled Perturbation Experiment (SCoPEx), and don’t be put off by the scientific name — it’s a complicated way of saying the scientists want to release a research balloon, into the stratosphere, “designed to drop small amounts of chalky dust and observe its effects,” says an article at Science.

The team of geoengineers, including Harvard climate scientist David Keith, believes “releasing reflective particles” into the upper atmosphere could “ameliorate the worst damage of global warming.”

Professor Keith says: “There is a real potential, maybe a significant potential, to reduce the risks of climate change this century — by a lot.”

Be that as it may, the team has encountered, er, “much technical and regulatory wrangling,” according to Science.

“These plans were greeted with utter panic,” emphasizes an article at Reason. “Activist groups declared the ‘risks of catastrophic consequences’ were too great, and there were ‘no acceptable reasons’ for allowing the project to go forward.

“Opposition to stratospheric aerosol injection research, and solar geoengineering research more generally, is intense. The underlying worry isn’t that the technology will be a flop.” Rather, that it might be successful…

Case in point, The MIT Press Reader used an excerpt of Saul Griffith’s book Electrify. (From the book’s title alone, you get where this is going.)

Griffith’s solution to the effects of climate change? Electrify… everything. And he scoffs at anything that represents a roadblock to this agenda, including geoengineering.

“Embracing geoengineering would [be] a bit like using liposuction as the solution to obesity when you’re just going to keep eating cheeseburgers,” says Griffith.

“Even if it works, we can’t afford to lose sight of the better, cleaner solutions proposed.” (Emphasis ours.)

Even if it works?! Sheesh… And here we thought the environment had reached its SHTF-must-act-now moment.

On a similar topic, a contributor responds to yesterday’s mailbag section. One reader thought The 5 didn’t give EVs a fair shake, particularly in the event of a hurricane evacuation.

“For the record, it’s state law that all gas stations in Florida be wired to have a (functioning) generator to keep the pumps working. This was the decree post-Wilma in 2005 due to full gas stations unable to pump.”

Another reader says: “I can carry spare gas a lot easier than spare electricity — unless of course it’s a generator, powered by an ICE (which uses gas).”

You all try to enjoy the weekend. Take care!