The Election Is Already Decided 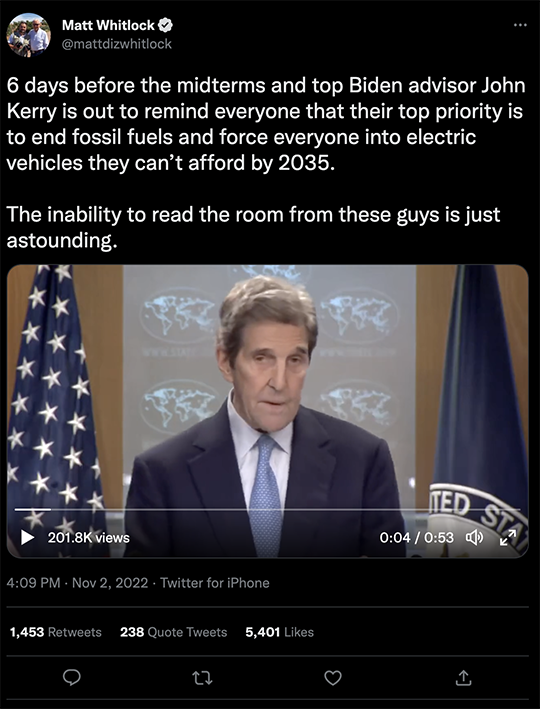 Yeah, so the fellow who tweeted that is a self-described “Republican communicator.” But he’s not wrong.

Last Friday, Jim Rickards issued his final election outlook for readers of Rickards’ Strategic Intelligence. Final, even with several days to go before Election Day — because he said the outcome is already decided, even if it’s not yet known: “Millions of votes have already been cast through early voting, absentee ballots, drop boxes and other techniques. Even those voting on Election Day itself rarely change their minds at this late date.”

After crunching all the available data, Jim and his team project Republican majorities of 245-190 in the House, and 53-47 in the Senate.

[Sorry, if you want the specifics, including Jim’s outlook for the dozen or so most competitive races, that’s reserved for paid subscribers.]

However… “If, after Election Day, control of the Senate is uncertain because it hangs on undecided races, you can expect a strong negative reaction from markets,” Jim adds.

“Pennsylvania has active litigation on whether mail-in ballots should be counted if they lack a signature on the envelope as required by state law. In a close race, this issue will come to the fore. It could drag out the declaration of a winner by weeks or months with acrimony from both sides.”

Two days ago, Pennsylvania’s Supreme Court ordered election officials not to count mail-in ballots that lack a written date on the outer envelope. However, federal courts might also have a say in the matter before all’s said and done.

Meanwhile, “Georgia requires a winner to have more than 50% of the vote,” says Jim. “If neither major-party candidate reaches the 50% level (due to third-party candidates and write-ins), then there will be a runoff election between the two leaders on Dec. 6, 2022. That will also delay the final declaration of a winner.”

This scenario is entirely plausible; due to a special election, both of Georgia’s Senate seats went to a runoff in 2020. Control of the Senate was up in the air for weeks.

Finally, “Watch out for upset Republican Senate wins by Tiffany Smiley in Washington and Don Bolduc in New Hampshire. Both are hard to call at the moment, but with Republican momentum growing and continued bad news on the economy, those wins cannot be ruled out. That would produce a political earthquake.”

Point being, “The stock market can deal with Republicans or Democrats,” says Jim. “It cannot deal with uncertainty.”

His guidance: “An increase in cash allocations ahead of Election Day is not a bad strategy.”

That’s especially the case in light of an issue that Jim says the Biden administration is doing its best to cover up going into the election. But everything will be out in the open as winter sets in… and once it is, he says the U.S. economy will grind to a halt.

That’s why he’s convening another emergency summit — an all-new pre-election edition, packed with information we promise you haven’t seen before — this Sunday night at 7:00 p.m. EST. Then, he’ll reveal the steps you can take to protect your money… along with a play that could potentially 15X over the next 90 days.

Just one click at this link and you’re automatically registered. Then watch your inbox for a confirmation email.

To Wall Street… which still can’t wrap its collective mind around the fact the Federal Reserve no longer has the stock market’s back.

We’ve said it since the start of the year: For the first time since 1987, propping up stock prices is no longer one of the Fed’s top concerns. Right now, it’s all about getting inflation under control.

But Wall Street still doesn’t get it.

Yesterday afternoon the Fed jacked up short-term interest rates another three-quarters of a percentage point, to a range between 3.75–4%.

Going forward, Fed chair Jerome Powell said the size of future increases might be smaller… but the end point for these increases will be higher than previously thought. Maybe as high as 5–5.25%. 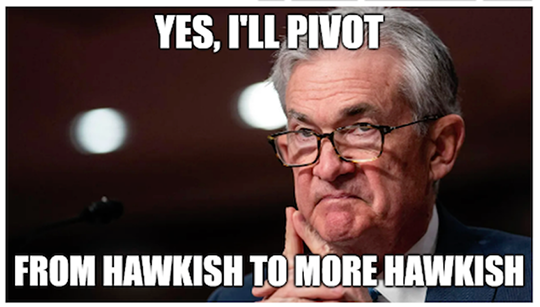 At one point during Powell’s post-meeting press conference, a reporter mentioned the stock market jumped after the Fed issued its written statement at 2:00 p.m. EDT. Powell immediately launched into a litany of reasons it shouldn’t.

The buzzkill is palpable on this candlestick chart of the S&P 500, annotated by Sean Ring at our sister e-letter The Rude Awakening… 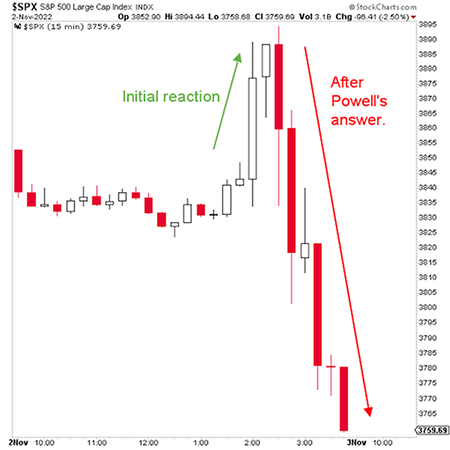 But really, should anyone be surprised? At his last press conference six weeks ago, Powell said his ultimate aim is “a positive federal funds rate [that] could be 1% or so.”

If he jacks up in half-point increments during the next three Fed meetings, that gets the fed funds rate to between 5.25–5.5% by mid-March. If core PCE inflation falls to 4.25–4.5%, then it’s mission accomplished.

Only problem is that core PCE inflation has been accelerating the last two months — and there’s no sign those increases are abating yet.

Jim Rickards paraphrases Powell thus: “He’s basically saying, ‘Sorry guys, I know we’ve conditioned you for years to expect a return to easy money. But this is a different time. We’re dealing with serious inflation here. And we’ve got a long way to go before we can ease up. There won’t be any ‘pivot’ anytime soon.’”

And so the stock market’s late-afternoon hissy fit yesterday is carrying over into today.

Precious metals got clobbered post-Powell, and gold is sinking further this morning to $1,624. Silver is up a bit after yesterday’s drubbing at $19.35. Crude is off nearly two bucks to $88.05. Treasury yields are rising, the 10-year note at 4.15%.

So… About that atrocious “amnesty” article in The Atlantic… 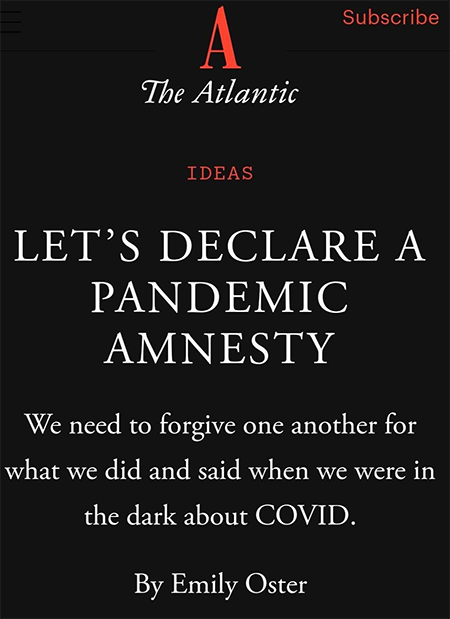 Brown University health economist Emily Oster has penned an apologia of sorts for her fellow control freaks and power trippers. Forgive and forget, she beseeches. “Treating pandemic choices as a scorecard on which some people racked up more points than others is preventing us from moving forward. We have to put these fights aside and declare a pandemic amnesty.”

There’s an abundance of hot takes we’ve seen. This sums up many of them at once…

There’s an earnest tone-deafness to the entirety of Oster’s article: “In April 2020, no one got the coronavirus from passing someone else hiking. Outdoor transmission was vanishingly rare. Our cloth masks made out of old bandanas wouldn’t have done anything, anyway. But the thing is: We didn’t know.”

Right, but she and the likes of her presumed to know… and they dictated to us accordingly. Here’s Oster herself less than 12 months ago, when the prospect of federal vaccine mandates still loomed over 80 million American workers… 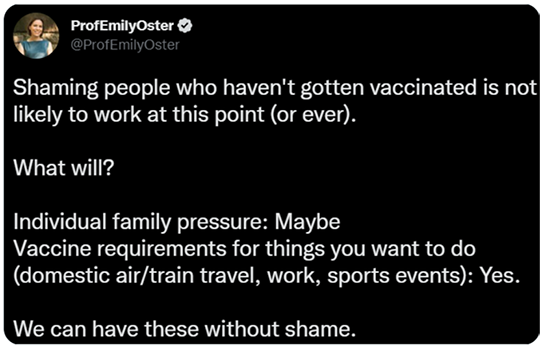 “Even if truly no one knew anything, then this is a reason for humility, not stridence,” writes the Substack blogger who goes by the pen name El Gato Malo. “The base case is always ‘respect others and their rights. Do not panic. Don’t do anything crazy or drastic without a very sound reason.’

“That’s not what happened. A bunch of terrified anti-science loons got loose with global government and pushed literally unprecedented-in-human-history programs of societal and economic upheaval that flat out broke the world while, predictably, having zero effect on the pandemic.

“The precautionary principle does not state, ‘Every time you get scared, do the most radical thing you can think of if it feels like safety’ — that is precisely what it warns against.”

And after all that, Oster just wants to “move on”?

No, the people who got it right don’t want to gloat — they want justice. And they want restitution — not in the form of more rob-Peter-to-pay-Paul stimmy checks, but in the form of legal judgments that strip the control freaks and power trippers of all their assets and their pensions and they’re living under a bridge. And the people who got it right also want a guarantee nothing like this will ever happen again.

Absent that justice and restitution and guarantee, the prognosis gets mighty ugly indeed… 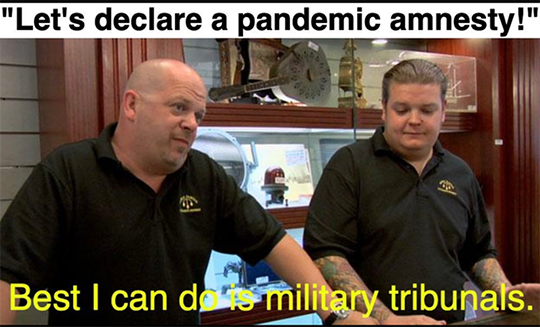 After your editor put out an inquiry on Tuesday about a documentary whose name I couldn’t recall, several replies rolled in.

One reader thought it might have been the Alex Jones film The Obama Deception. Nope, not the case.

“I’m almost certain he’s talking about the pseudo documentary Zeitgeist,” said another. Nor was he alone. “That movie really went off the rails. I just figured it was a psyop or foothold for controlled opposition.

“If one is inclined to watch it, I’d recommend instead spending time with something that has true educational and entertainment value, like Pink Floyd’s The Wall. Or I.O.U.S.A.”

Alas, that guess is also off the mark. (We’re kinda surprised no one suggested Loose Change, come to think of it.)

But a couple of readers nailed it…

“Thrive made by Foster Gamble and Kimberly Carter Gamble,” says one. “Ninety-four million views at least. This movie was over two hours.”

“It was interesting,” says another who got it right, “but pretty hard to believe all the claims they made. Wasn’t that book The Secret popular around the same time?

“Always look forward to my daily dose of The 5!”

The 5: Thanks to everyone who took a stab, successful or not. Yes, Foster Gamble is an heir to the Procter & Gamble fortune who undertook this most peculiar project.

The second reader sent us a link from RationalWiki, reminding us that several people interviewed for the film saw fit to issue an open letter disavowing their involvement — including Deepak Chopra, astronaut Edgar Mitchell and Confessions of an Economic Hitman author John Perkins.

But props to the Gambles for transparency. They posted the letter on the film’s website — still up and running more than a decade after the film’s release.

And before we go, one of our most longtime readers asks us to jog his memory…

“Hazy recollection — you were talking about some lady named Fowler who was going through the pharma and FDA revolving doors.”

The 5: That’s Elizabeth Fowler. She was a VP for the insurer WellPoint before joining the staff of Sen. Max Baucus (D-Montana) where she drafted much of the Obamacare bill. Once the bill became law in 2010, she moved to the White House to oversee implementation, and when her work was done she left for Johnson & Johnson.

These days she’s back in “public service” as the “deputy administrator and director of the Center for Medicare and Medicaid Innovation.”

We cringe at the thought of whatever she might “innovate” next…