A Loophole to an Awful IRS Rule

Per the American Rescue Plan, online platforms are now required to issue a 1099-K tax form for any third party with a total revenue of just $600.

This is a complete about-face on the part of the IRS. Yes, online sellers, for example, were always required to report money they made via platforms like eBay. However, “there’s been little oversight for accounts with revenues under $20,000 — until now,” The Daily Dot notes.

But an escape hatch has emerged. Writes GOBankingRates: “Small businesses, independent contractors and gig workers who want to avoid reporting income paid through P2P [person-to-person] P2P apps like Venmo and PayPal might have found a loophole…

“That loophole is Zelle, a bank-to-bank payment service that does not hold funds,” the article says.

“Because of its setup, Zelle claims that its payments are not subject to a new IRS tax rule that went into effect on Jan. 1, 2022… 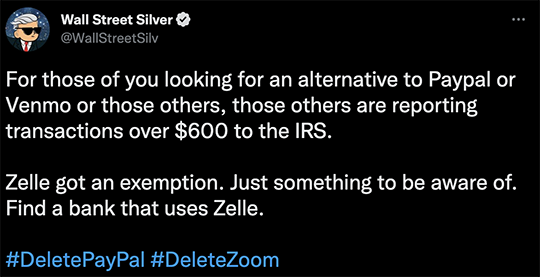 “The IRS is very clear that anyone receiving business payments on a P2P platform such as PayPal, Venmo and Stripe is responsible for reporting that income,” says GOBankingRates.

“Things are fuzzier when it comes to Zelle, however, because it is integrated into users’ bank dashboards and run by Early Warning Services LLC” — a venture owned jointly by BoA, JPM, Wells Fargo, PNC, Capital One, Truist and US Bancorp.

And according to Wendy Walker of the IRS Advisory Council, ACH transactions “are not subject to 1099-K reporting.” A fact that a Zelle spokesperson repeats: Payments sent through the network, indeed, “are not subject” to the IRS rule.

But Steven Rosenthal of the Urban-Brookings Tax Policy Center warns: “It’s a dangerous game for tax cheats to migrate to Zelle. It wouldn’t be hard for the IRS to unravel that.”

First? What a buzzkill! And second? 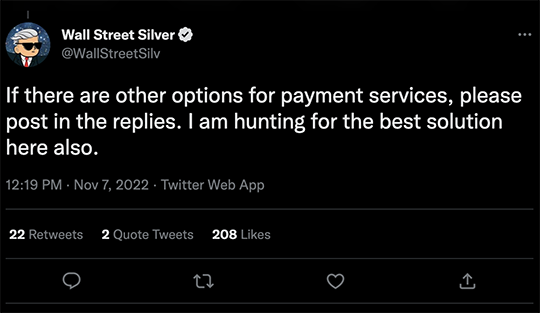 Absolutely… In fact, when the $600 Treasury/IRS proposal was just a gleam in Janet Yellen’s (er, Biden’s?) eye, we mentioned how the rule would backfire bigly, further entrenching the“under the table” economy.

And hey, if Zelle is protecting Americans’ privacy, unwittingly or otherwise, we’re on board. But we don’t expect it to last, especially with the expanding IRS — 4,000 new agents, at last count. Still a far cry from the 87,000 new goons that Team Biden wanted.

The Labor Department issued its monthly U.S. Consumer Price Index (CPI) report, indicating inflation was at a “cool” 7.7% in October, year-over-year, versus the 8.0% economists anticipated. Month-over-month? Inflation was steady at 0.4% from September.

On a “core” basis — stripping out the steep costs of food and energy — prices on goods and services were up 6.3% y-o-y, slightly down from the 6.6% “consensus” opinion.

And with that, the mainstream financial media are quick to resurrect the Fed “pivot” narrative. Here’s what Reuters has to say: The report is among “the strongest signs yet that inflation was starting to subside, which would allow the Federal Reserve to dial back its hefty interest rate hikes.”

Following up on the FTX debacle, Axios says: “If Tuesday was crypto’s Bear Stearns moment… then Wednesday was its Lehman Bros. moment… simply imploding into a balance-sheet hole of unknowable size.” Yikes.

Jim Rickards’ chief analyst Dan Amoss comments: “I think this is worse [than Theranos] from the perspective of shock waves that we have not seen yet. (Like Tom Brady investing… a fortune in FTX equity?!?) Even Dan Loeb, whose judgment I respect, fell for the FTX story! (His fund, being diversified, I’m sure will survive.)

“The lesson?” Dan says. “Don’t blindly follow anyone into any trade. Also, anyone from any background can outfox the biggest hedge funds provided they ask the right critical questions and put in the work.”

As for FTX CEO Sam Bankman-Fried, Dan adds: “What a travesty for all involved to have trusted this twerp.” 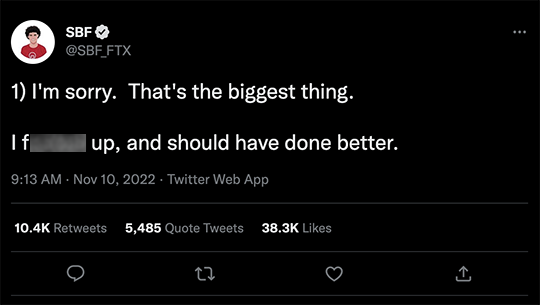 What follows is a 22-point plea to secure $8 billion in emergency funding (he says he’d be very “grateful”) to solve FTX’s liquidity crunch, while assuring U.S. FTX users that their funds are “fine.” Well…

Where in the world is SBF? That’s the multibillion-dollar question.

On Tuesday, Marijuana legislation was on the ballot in five states.

Missouri and Maryland — where Paradigm Press is headquartered — approved marijuana for recreational use. But voters in deep-red states North and South Dakota as well as Arkansas rejected recreational weed. 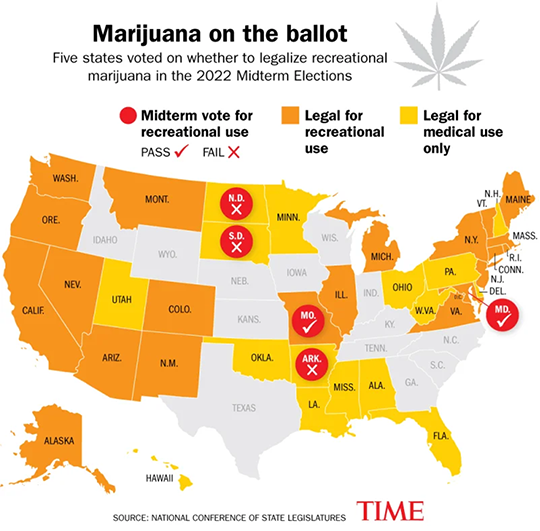 “House lawmakers will hold a hearing next week to discuss bipartisan marijuana reform issues at the federal and state level,” says an article at Marijuana Moment.

The House Oversight Civil Rights and Civil Liberties Subcommittee has scheduled a meeting on Tuesday, and “while details about the newly announced meeting are sparse, the panel will likely have new state developments to consider after Tuesday’s election.”

Including chair of the Oversight Subcommittee Rep. Jamie Raskin (D-MD), who wants to revisit an already rejected amendment to the MORE Act. Raskin’s proposal would have federal agencies review security clearance denials — retroactively to 1971 — to make certain marijuana wasn’t used “as a reason to deny or rescind a security clearance.”

In addition, Rep. Nancy Mace (R-SC), who is the subcommittee’s ranking GOP member, says she’s received “a promise” that her proposed States Reform Act will be up for discussion.

According to Marijuana Moment: “That legislation would end federal marijuana prohibition while taking specific steps to ensure that businesses in existing state markets can continue to operate unencumbered by changing federal rules.”

Our macro expert Jim Rickards says: “Central banks bought a record amount of gold in the third quarter of 2022,” Jim says, buying “over 399 metric tonnes worth about $20 billion at the market.

“Among the major central bank buyers were Turkey, Qatar and India,” he says. “Large amounts of gold were also purchased by central banks that do not report their purchases including China and Iran.

“Central banks are among the most powerful financial players on the planet,” Jim continues. “They have almost unlimited resources, including billions of dollars of dollar-denominated reserves that can be sold to purchase gold.

“What does it mean when some of the biggest players on Earth are buying gold and everyday investors are not? It means they know something you don’t.”

To Jim’s way of thinking: “Central banks have a front-row seat to an emerging global liquidity crisis in which confidence in the U.S. dollar may be eroding and gold may once again become the go-to safe-haven asset.”

And with central banks putting a floor under the price of gold, Jim adds: “It’s not too late for everyday Americans to join the big central banks and acquire some gold as a rainy-day hedge against the collapse of confidence in the dollar.

“This crisis may arrive sooner than anyone expects,” he warns. “The time to invest in gold is now.”

Reminder: Our firm owns a share of Hard Assets Alliance, so you can assume we’ll take a small cut of any fees… which, by the way, are among the lowest in the business.]

For more on the oldest store of value in the world…

“A history enthusiast in Newfoundland has discovered what may be the oldest-known English coin ever found in Canada,” says a CTV News article.

Edward Hynes uncovered the coin at an undisclosed location near an archeological dig site off Newfoundland’s southern coast. “Hynes contacted his local heritage society right away when he first spied the coin.”

The “thin circle of solid gold [is] slightly smaller than a quarter… weighing a little more than a dime.” 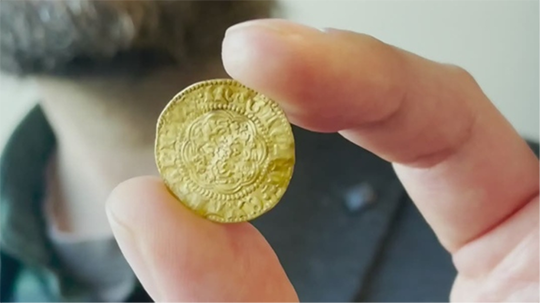 After consulting with a retired curator from the Bank of Canada’s currency museum, the coin — a Henry VI quarter noble with a face value of one shilling and eight pence — was found to have been minted in London some 600 years ago.

“That’s about 70 years before John Cabot landed on Newfoundland’s shores in 1497 after setting sail from the English port of Bristol,” the article mentions. “But the coin’s age doesn’t mean someone from Europe was on the island before Cabot… For example, it could have been part of a later settler’s collection.”

You all take care, and we’ll be back Friday with more of The 5.