“I Wanted Him off the Streets”

“I think he’s a sociopath and I think he’s one of the great financial criminals since [Bernie] Madoff. And I don’t say that lightly,” remarks the short seller Marc Cohodes.

Perhaps you’ve already deduced who Cohodes is talking about if you read Friday’s edition. It’s Sam Bankman-Fried or “SBF” — the founder of the now-circling-the-bowl crypto exchange FTX.

Over the weekend, the Financial Times reported that according to “investment materials” that came into its possession, FTX “held just $900 million in easily sellable assets against $9 billion of liabilities the day before it collapsed into bankruptcy.”

[We could crack a few jokes about how that 10:1 ratio is no worse than, maybe even better than, the typical bank’s. But we’ll let it go today…]

“When I listened to this guy [SBF], nothing he said made sense,” Cohodes tells our acquaintance Demetri Kofinas on the Hidden Forces podcast.

“I listened to interviews with him… and he talks, I would say, in a figure eight. Nothing adds up, nothing makes sense, there’s no explanation to it.”

Cohodes might be one of the most fearless people in all of finance. Four years ago, we chronicled a run-in he had with FBI goons that, fortunately for him, ended up going nowhere. He does not care who he calls out as a fraud because he’s conducted deep research beforehand.

On his Twitter feed last May, he started raising questions about FTX.

“When they call him the J.P. Morgan of crypto, or the next Warren Buffett, it always sort of piques my interest — especially for a guy who has no background, no mentor, no resume, no nothing.”

The following month, June, Cohodes concluded the value of the firm was effectively zero.

Which, of course, was not how allegedly savvy investors like Sequoia Capital viewed the company or SBF. Sequoia, among others, fell for SBF and “a preternaturally good story” — the memorable words Vanity Fair writer Nick Bilton applied to Elizabeth Holmes and Theranos.

As with Holmes, it didn’t matter if the story didn’t “add up” or “make sense.”

Worth noting: Unlike most of his big short calls, Cohodes made no money off this one. Usually he makes a fortune betting against the stock of a company like the biomedical firm MiMedx. (That’s the one that caused his run-in with the FBI.)

But there was no stock to bet against here — and not enough liquidity in the crypto space to make the potential reward of a short bet worth the risk.

“I wanted him exposed — and he is exposed now — and I didn’t make a dime on it… I decided to do this project because I think the world is a better place without this guy and without FTX in business.”

Plot twist: If and when SBF is ever held to account, will he justify his actions by saying he was trying to serve a greater good?

SBF is an advocate of something called “effective altruism.”

Per Wikipedia, “Effective altruism is a philosophical and social movement that advocates ‘using evidence and reason to figure out how to benefit others as much as possible, and taking action on that basis.’”

As SBF saw it, the objective was literally to make as much money as possible so he could channel it toward whatever he deemed a worthy cause — including the $37 million he shoveled to (almost exclusively) Democratic candidates during the 2022 campaign cycle.

Seriously, watch the first minute or so of this video — well, if you can get past the sight of SBF’s moobs here… 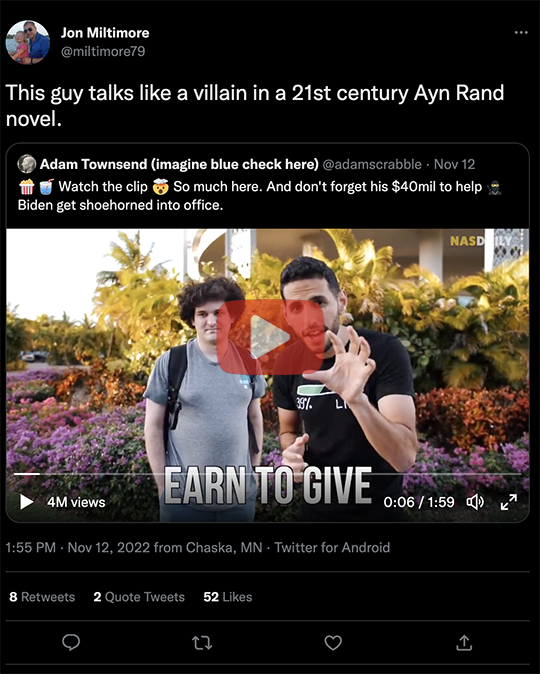 A few weeks ago, none other than Sequoia Capital ran a long article extolling the virtues of SBF and effective altruism — an article that’s since been scrubbed from its website, heh… 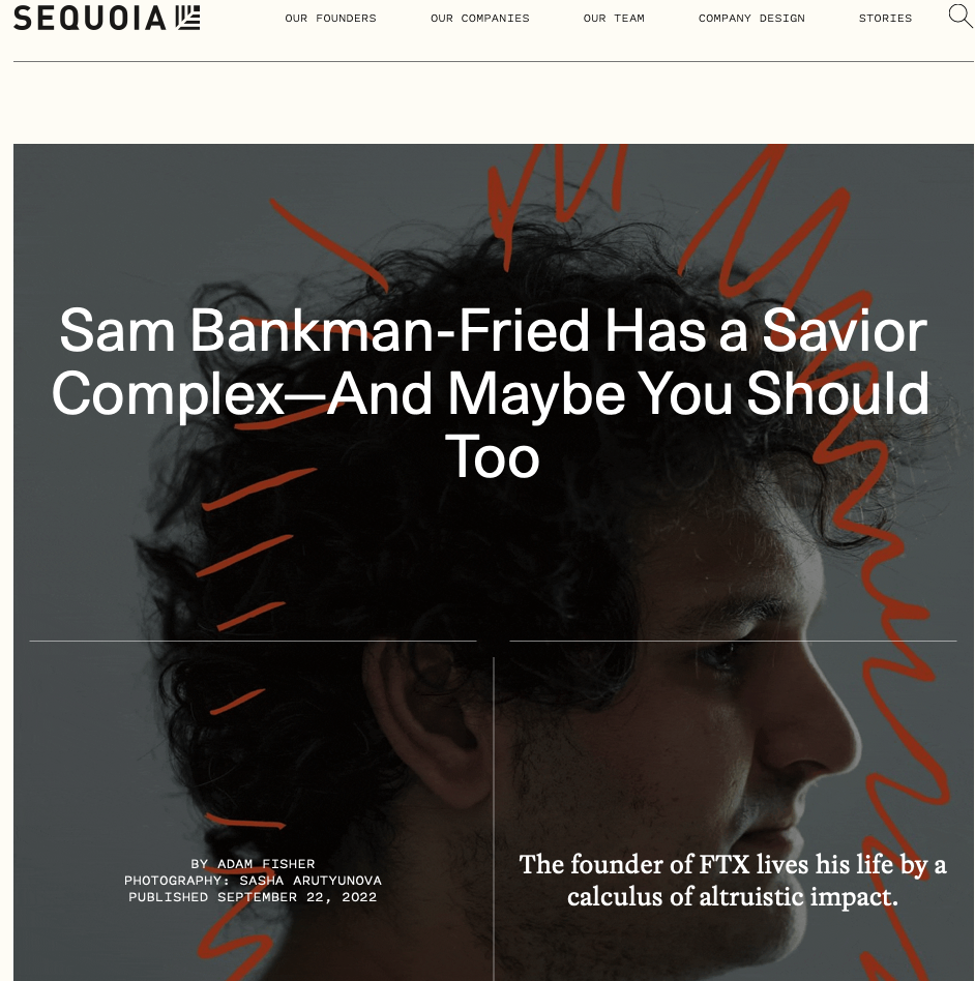 “Beware the ‘man on a mission’ running any company,” advises Paradigm senior analyst Dan Amoss. “Or as Agora founder Bill Bonner says, a ‘world improver.’ Such a CEO might just conclude that his mission is more important than the customer dollars under his custody, as SBF apparently did.”

Of course, SBF would hardly be the first person in history to commit heinous acts on the theory that the ends justify the means. But SBF seems singularly in tune with the 2020s zeitgeist.

We can’t help drawing a parallel to how both traditional media and social media suppressed the Hunter Biden laptop story three weeks before Election Day 2020 — smearing it as “Russian disinformation.” Twitter and Facebook made it nigh-impossible for users to share the story.

Once the election was over, Big Media outlets gradually acknowledged the laptop was indeed authentic and there were potentially newsworthy things on it.

But reporting that in the heat of the campaign would have undermined the agenda of saving “our democracy” from the orange usurper then occupying the Oval Office.

Truth had to take a back seat to a greater cause.

And so, it seems, did the billions in FTX customer funds.

So what are the investment takeaways as a new week begins? For one thing, we have further confirmation of our suspicions on Friday: Crypto is now radioactive for institutional investors. 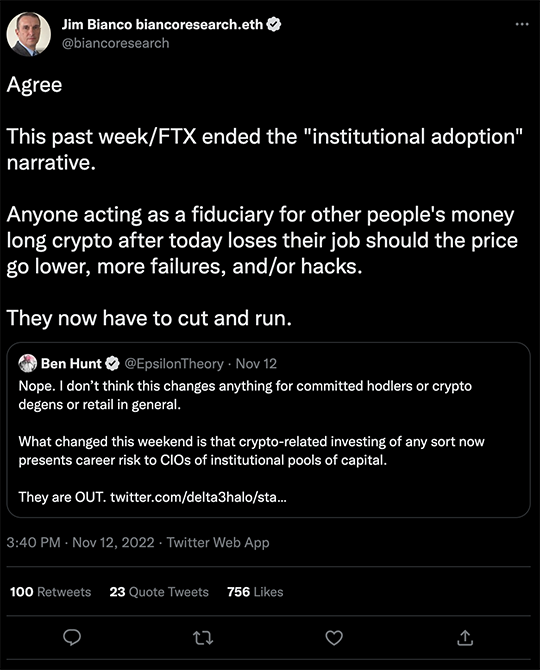 “But if Bitcoin goes up,” James adds, “GBTC will go up more than Bitcoin because the value of its holdings will increase and the discount will most likely go back to a normal 8–10%.”

As for more traditional markets, stocks are yo-yoing with every utterance of every Federal Reserve official.

They fell on the open after Fed governor Christopher Waller — supposedly chairman Jerome Powell’s closest confidant — said the stock market overreacted to the easing inflation numbers last week: “The market seems to have gotten way out in front on this,” he said at a conference in Australia.

But then they recovered after Fed vice chair Lael Brainard told a Bloomberg panel, “It will probably be appropriate soon to move to a slower pace of increases.”

At last check, the Dow was up about a third of a percent at 33,878… the S&P 500 barely in the green at 3,997… and the Nasdaq about a third of a percent in the red at 11,289. Amazon is down 1.7% despite the usually bullish news of impending layoffs; The New York Times says as many as 10,000 personnel will get kicked to the curb as early as this week. Happy Thanksgiving!

To the mailbag, where SBF is a hot topic: “Has anyone noticed the similarities?” a reader writes as he submits the following pictures… 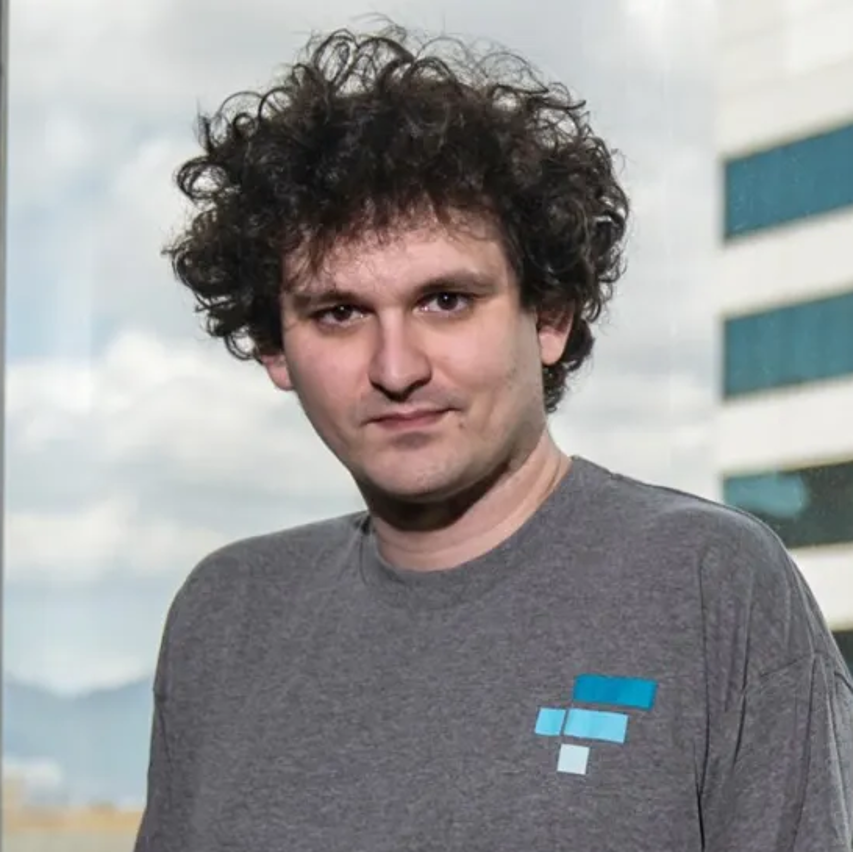 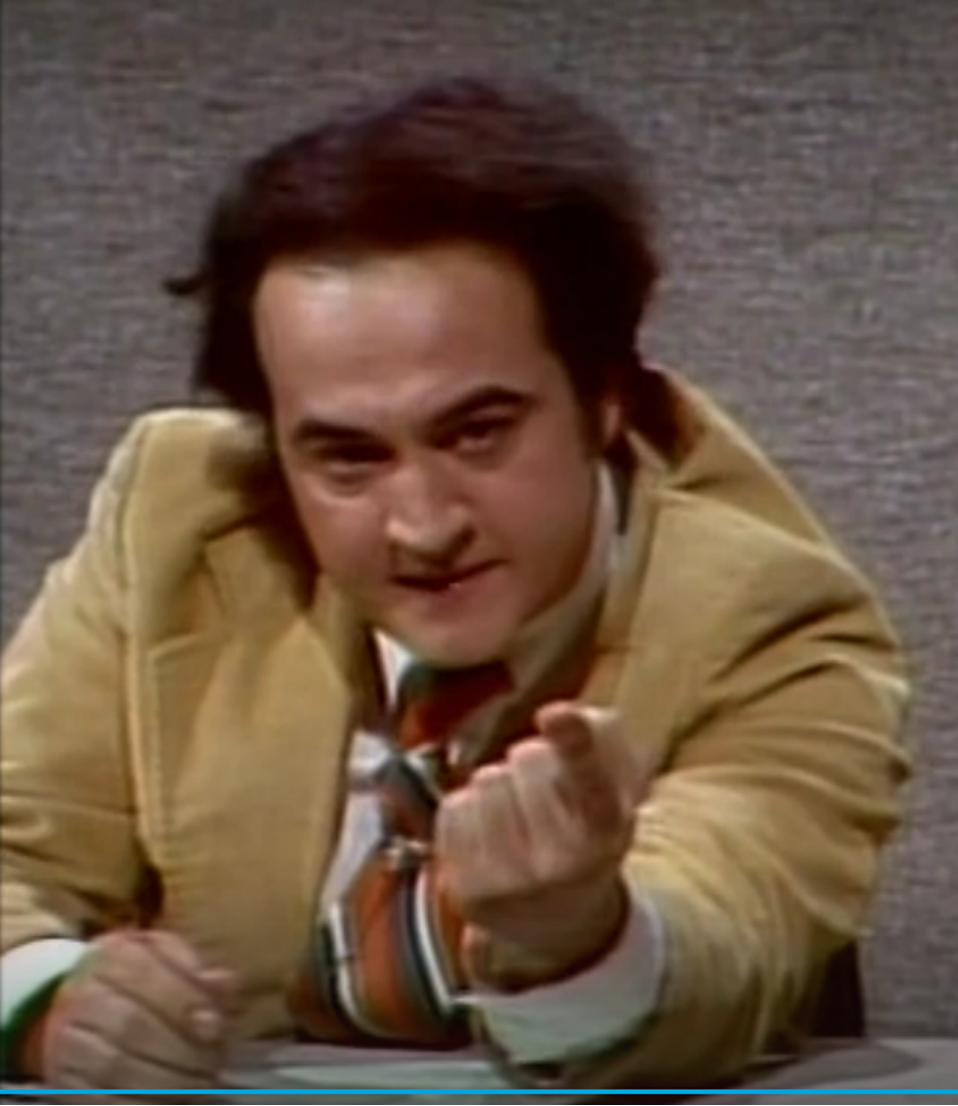 “I must admit, I had not much looked into Corzine’s history, given my acute disdain for modern-day politicians and the accompanying likelihood that the more I learn about them the more I will detest them.

“To say the least, what you brought to light about this particular scumbag makes me long for the days of frontier justice… obviously this was another example of Obama’s laughable 2008 campaign pledge to ‘hold Wall Street accountable,’ which I knew then was a joke, indeed, and one he profited from handsomely.

“So depressing, on Veterans Day, to see so much evidence of the two-tiered legal system (I refuse to call it a justice system, which it clearly is not) encouraging and enabling such massive theft and fraud for the card-carrying members of the big club the vast majority of us ain’t in (hat tip, of course, to George Carlin there). It’s just another aspect of today’s America that surely would have our Founders and the many veterans who gave their lives wondering why in the hell they bothered….

“Agreed also that Scam Bankrupt-Fraud, as they’re calling him, will get a similar pass. He greased the right palms, after all. Rules-based society, indeed: ‘Rules for thee, not for me.’ I’m not seeing how we’re any better than Russia or China, either, not with such self-aggrandizing, destructive and hypocritical vermin in the seats of power: the elected marionettes and their masters.

“On the bright side, it’s good to see precious metals showing signs of life. Enjoy your weekend, and please, keep doing what you do.”

“Thanks for printing my thoughts on your critique of Ayn Rand and Atlas Shrugged and for taking the time to respond,” says our final correspondent.

“I have known many readers of Atlas: Some have loved it and been inspired by it, some have not. But the perspective you present is new to me and I find it tragic.

“The ideas underlying Atlas are serious and deeply philosophical. They are the ideas that Rand later presented in nonfiction form in the essays you recommend. But Atlas itself is a work of fiction: Romantic art in the vein of Victor Hugo or Dostoyevsky. The characters you describe as impossibly heroic are meant to be just that. They are idealized and larger than life, portraying an artistic vision of what man can be at his or her best. I couldn’t agree more about the value of reading Rand’s essays, but nothing makes those ideas come alive for me the way Atlas does.

“As for the claims of a cult, I put that in the same category as what we see all around us today. Instead of taking on the ideas contained in an argument or a philosophical view, just shout ‘racist, transphobic, conspiracy theorist,’ or in this case ‘cult.’ It’s much easier to denigrate the speaker and make their ideas untouchable than to counter the ideas themselves.

“Take the advice of the reader who originally started this thread and invest the time to read or reread Atlas Shrugged. Apart from being a great read, the ideas contained in that 1957 book are needed today more than ever.”

The 5: All I can do is come back to what I said originally: There are too many other books I haven’t read the first time.

At present, for instance, I’m making my way through Garet Garrett’s The People’s Pottage. You can get a free PDF via the Mises Institute, although I’d recommend the hardcover edition published in 2004 under the title Ex America; it has helpful footnotes to make sense of Garrett’s references to contemporary events and personalities of the New Deal and early Cold War years.