“In essence, gold is down about 15% since April,” he continues, but the technicals behind gold’s lagging price vary. Mainly? “The dollar has strengthened against almost all foreign currencies, particularly against the euro.

“One reason why the dollar is up is that the Federal Reserve is raising interest rates. And with higher yields (courtesy of the Fed), bonds look better. So large numbers of dollars have exited gold for bonds.

“But, as gold prices stall, something else is happening in the gold space. A ‘discovery’ of sorts.” Or rediscovery?

“We may be kicking off a new pro-gold trend that bodes well for gold’s dollar price,” Byron says.

“At a conference I attended in Florida, sponsored by an old friend, Rick Rule, the theme was mines and mining. 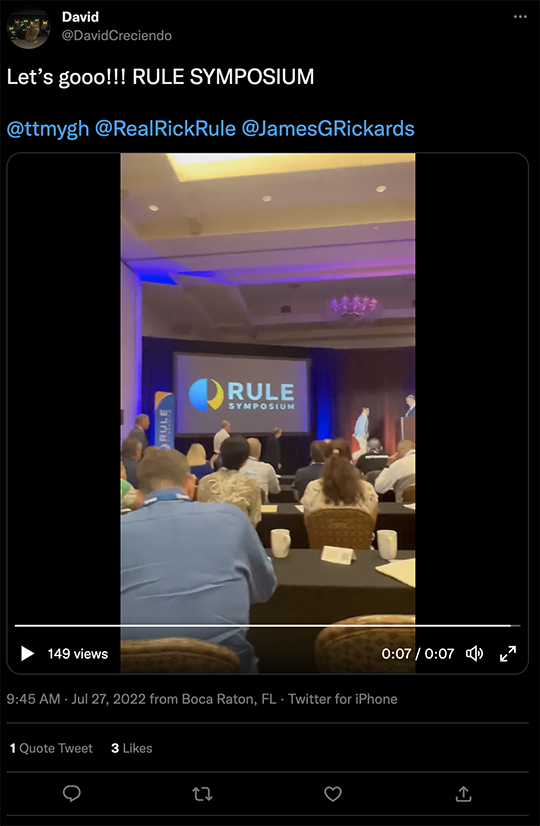 Byron King and Jim Rickards were both keynote speakers.

“In many ways, this conference was not unlike other ‘hard asset’ conferences that I’ve attended over the past 20 years. Indeed, many of the same people were in attendance whom I’ve come to know well, including speakers, exhibitors and attendees.

“Except there was one new development…

“I noticed quite a few younger people, meaning in their late 20s to early 40s. And more than a few attendees brought family members, including children and even babies in strollers.

“Definitely, this was not a conference full of aging, gray-haired gold bugs,” Byron adds. Not that there’s anything wrong with that…

“I spoke to many of these unfamiliar faces, being curious [about what would] bring them to a rather technical investment conference that focuses on gold and other metals.”

“Over three days, I heard the same theme again and again: made money in crypto, now looking to protect it.

“In the past two years, an entire generation has made some serious money in crypto,” says Byron, “and more than a few are skeptical of where that particular roller coaster is going.

“Almost every one of these newly minted crypto successes admitted that they knew little about gold… let alone about investing in gold, gold mining or anything related to the sector.

“The takeaway here is that over many years, the gold sector has been pushed into a memory hole. It’s been left in the shadows by endless media hype for other things: the latest, greatest, go-go, whiz-bang techno-thing”… and even — as in the case of FTX — “smoke and mirrors.”

Byron notes: “Except now, something new seems to be developing.” Here’s one timely example…

Acclaimed “Big Short” investor Michael Burry — who manages Scion Asset Management — has been outspoken about what he sees as some of the market’s most speculative assets. Dogecoin, NFTs, Tesla and the GameStop frenzy last year…

But Burry rarely comments on one of the oldest hard assets — until this week: 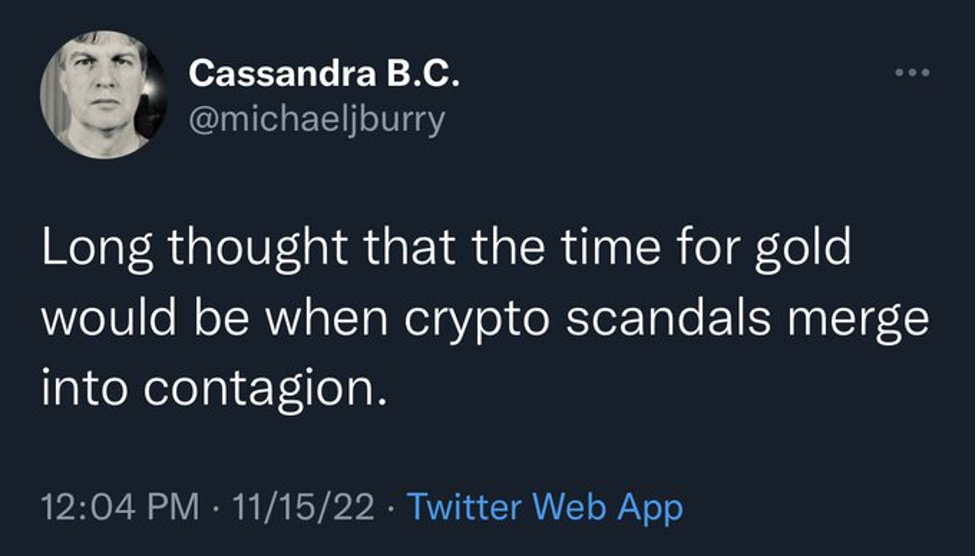 The tweet Tuesday, of course, was prompted by FTX’s colossal meltdown; meaning, on the other side of the crypto coin, are a lot of millennial and Gen X investors who got burned. Badly.

“According to [Burry], the crypto chaos caused by the FTX saga sets the stage nicely for gold,” says Kitco. And, appropriately enough, Burry’s tweet “coincided with gold getting a lot of attention from investors.”

Byron adds: “Right now the overall gold sector is starved for new money, and certainly for outside capital.

“Even a small number of new, younger faces at a gold conference marks a positive development for the exploration and mining industry and, more broadly, for gold investment as a whole.”

Two outta three ain’t bad? Two of the major U.S. stock indexes might end the week in the green.

And the crypto market is stayin’ alive — at least, flagship crypto Bitcoin and Ethereum are hanging in there, at $16,500 and $1,200 respectively.

Leaving the markets behind, following are some of the most pressing supply-chain updates, particularly as we approach the holiday season…

Supply chain snag #1: We’ve been monitoring the possibility of a nationwide freight rail strike since mid-July, an event that could utterly rupture America’s snarled supply chains.

About nine weeks ago, it looked as if the major railroads had come to terms with union leaders, with a little cajoling from Team Biden.

But in late September, one of 12 unions rejected the deal… And in late October, so did a second union, when over 60% of the Brotherhood of Railroad Signalmen voted against the new contract.

The first union to reject, the Brotherhood of Maintenance of Way Employees, could have walked as early as Saturday, Nov. 19. But they’ve gone back to the bargaining table. For now.

“All 12 unions representing roughly 115,000 freight rail workers must ratify the new contract to prevent a nationwide rail shutdown,” notes NPR. “If one strikes, the others all honor the picket lines…

“Should any one of them fail to reach an agreement, a strike or a lockout by the rail companies could come as early as 12:01 a.m. on Dec. 9.” (Emphasis ours.)

“A railway strike would cost the U.S. economy over $2 billion per day,” Jim Rickards said earlier this month. “With supply chains already breaking down and the economy already weak, a major rail strike would all but guarantee a serious recession beginning in the fourth quarter of 2022.”

Supply chain snag #2: Extensive traffic jams at the ports of LA and Long Beach are a thing of the past… Good news, right?

The bad news is containerships from Asia have bypassed the port complex in recent months, “partly to avoid the congested ports and partly for fear of potential labor problems,” says an article at the Los Angeles Business Journal.

“Shippers are sending more cargo through the East and Gulf Coast,” says general manager Gene Seroka of the Port of Los Angeles. “This will likely continue until a West Coast labor contract is in place, and that can’t happen soon enough.”

According to the article: “The dockers’ contract expired on July 1 and they have been working without a contract ever since. They previously declined a one-year extension.” 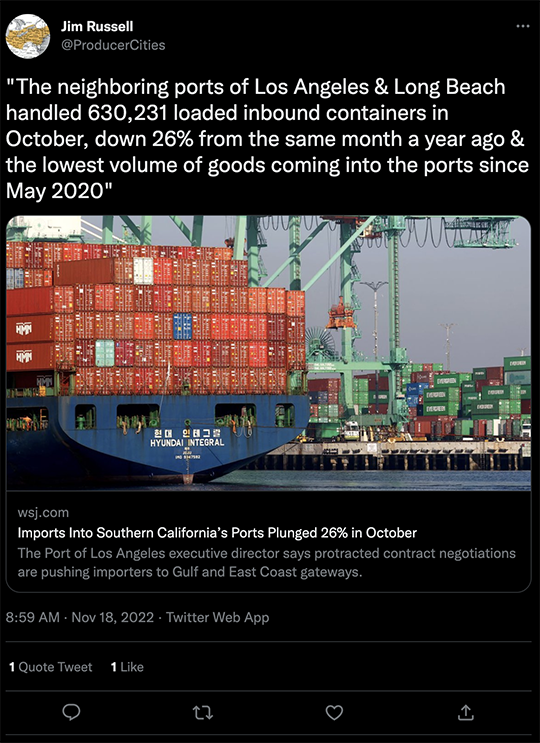 Unlike the with railroad unions, no strike has been announced.

Nevertheless: “The port complex has a long history of strikes and labor disputes that have caused significant delays.”

Imagine a railway strike… plus, a dockworkers’ strike at a major U.S. port complex. (We haven’t even addressed trucker and diesel shortages!) And the economy is on a razor’s edge…

[The case for gold is getting more and more compelling… We’ve long recommended Hard Assets Alliance for buying and storing gold and other precious metals. We believe in their mission so much that we purchased a stake in the company. And should you decide to fund an account, we’ll get a small cut of any comparatively low fees.]

At this point, the Medical Marijuana and Cannabidiol Research Expansion Act just requires the president’s signature, marking “the first time a stand-alone piece of marijuana reform legislation has ever been sent to the president’s desk.”

Per Cannabis Business Times: “The legislation aims to encourage and facilitate research on cannabis and its potential health benefits by streamlining the application process for studies and removing U.S. Food and Drug Administration (FDA) barriers for researchers that often slow the process.”

Additionally, the act would make it lawful for DEA-licensed entities to research, using cannabis not grown at the University of Mississippi — until now, the single federally approved cannabis grow facility in the U.S. (Already this year, the DEA has licensed six new researchers to grow marijuana.)

Of the new legislation, Sen. Chuck Schumer (D-NY) says: “If you’re one of the millions of Americans who deals with conditions like Parkinson’s or epilepsy or post-traumatic stress, or any number of other conditions, cannabis might hold promising new options for managing these diseases.”

Of course, politicians — including Schumer — are playing the long game: “I hope after passing this bill,” he says, “the Senate can make progress on other cannabis legislation, too,”

A memo to employees Thursday indicates that Twitter’s SF headquarters is closed effective immediately, and won’t reopen until Monday.

No reason was given for the building’s closure, but “some suspect the move may be [attributed] to fears held by Elon Musk and his team that disgruntled employees may attempt to sabotage the company from within,” says RT.

The memo further reminds employees “to comply with company policy by refraining from discussing confidential company information on social media, with the press or elsewhere.”

But an unknown source won’t be silenced, projecting a string of epithets aimed at Musk — in Twitter blue, no less — onto the office building… 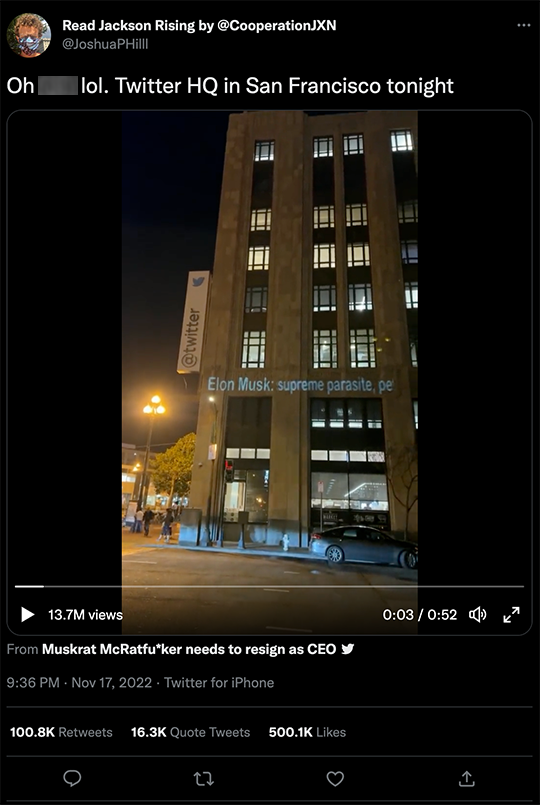 Heh, if only Twitter bros would protect free speech online…

“Twelve-week trial for digital currency in USA,” a reader writes. “Please address this rumor. It is my understanding that the program began on Tuesday, Nov. 15.”

“The banks will work with the Fed’s New York Innovation Center to simulate digital money representing the deposits of their own customers and settle them through simulated Fed reserves on a distributed ledger,” says the Washington Examiner.

“The [project] will also test… the viability of the proposed system within existing laws and regulations,” says the NY Fed’s press release.

Try to have a good weekend, you all! And I recommend Saturday’s highlight edition of The 5… about a Visa’s FTX imbroglio.