“This might be just a pilot program, but you can bet that the real McCoy will be here before you know it,” says Paradigm’s macro maven Jim Rickards.

We start a new week where we ended the last one — with the Federal Reserve Bank of New York’s 12-week “digital dollar pilot.”

“The project, which is called the Regulated Liability Network, will be conducted in a test environment and use simulated data, the New York Fed said. The pilot will test how banks using digital dollar tokens in a common database can help speed up payments.”

Basically the idea is to see how a central bank digital currency (CBDC) might help achieve near-instant settlement of transactions — in contrast with the clunky days-long process involving your bank, credit card, etc.

Still, the endgame is in view: It’s a major step toward a full-blown CBDC — or in Jim’s parlance, “Biden Bucks.”

Yes, payments will be faster, cheaper and more convenient. But the severe downside is that “every purchase you make would be tracked by the government, including purchases they don’t like. Biden Bucks would create new ways for the government to control how much you could buy of an item, or even restrict purchases altogether.”

If, say, you buy a book by an author who’s frowned upon by the power elite… they’ll know.

“With the digital dollar, they can tag you and potentially label you a domestic terrorist or some such,” says Jim. ”And what if you make a political contribution to a candidate the administration doesn’t like? Well, now you could really be in trouble.

“Yes, I realize that sounds like a conspiracy theory to some,” Jim concedes. “That’s fine. But more and more these days, conspiracy theories have a funny way of becoming fact a short time later.”

The wheels are in motion: If you haven’t taken the measures Jim recommends to insulate yourself from the worst effects of “Biden Bucks,” best follow this link and get started right away.

According to the New York Fed’s announcement last Tuesday, “Legal services are being provided by Sullivan & Cromwell LLP” to grease the project along.

If the name sounds dimly familiar, Sullivan & Cromwell is one of the most prestigious white-shoe law firms out there.

To what end? As Pam Martens and Russ Martens write at Wall Street on Parade, “Why does one need to hire a Big Law firm for a pilot program using a ‘theoretical’ concept?”

What’s more, why would the New York Fed rely on the very same law firm that’s hip-deep in the dealings of the now-collapsed crypto exchange FTX?

Write the Martenses: “After what would appear to be a failure on the part of Sullivan & Cromwell to do proper due diligence on FTX before it facilitated it buying up other crypto companies, Sullivan & Cromwell has now somehow managed to become the law firm making bankruptcy filings on behalf of FTX in bankruptcy court in Delaware while simultaneously handling prosecutor inquiries about FTX. That’s a lot of hats to be wearing.”

And now, to be aiding the New York Fed on a CBDC trial run? Just breathtaking.

The latest documents filed on Saturday reveal that FTX owes its top 50 creditors $3.1 billion. The top 10 were all owed at least $100 million… and the largest sum owed to a single creditor is $226 million.

All the names of these creditors have been redacted to protect… whom exactly?

Meanwhile, Instagram — an arm of the Zuckerberg Meta empire — has removed any links to the article we cited at length last Thursday about the connections between FTX and the government of Ukraine. Because “misinformation,” natch…

On the surface, the ban makes zero sense. In his article, reporter Kit Klarenberg makes it plain as day that “while some have accused FTX of serving as a money laundering vehicle for the U.S. Democratic Party, concrete evidence supporting this claim has yet to materialize.”

Which means there’s something thoroughly factual in the article that someone decided must be suppressed.

“This takedown was an act of political censorship,” tweets Max Blumenthal, editor at The Grayzone — where Klarenberg’s article was published. “Its removal… recalls the election season censorship and suppression of the Hunter Biden laptop story.”

In other developments, FTX cofounder Sam Bankman-Fried is still on the agenda for a “DealBook Summit” hosted by The New York Times set for Wednesday, Nov. 30 — along with Ukraine President Volodymyr Zelensky… 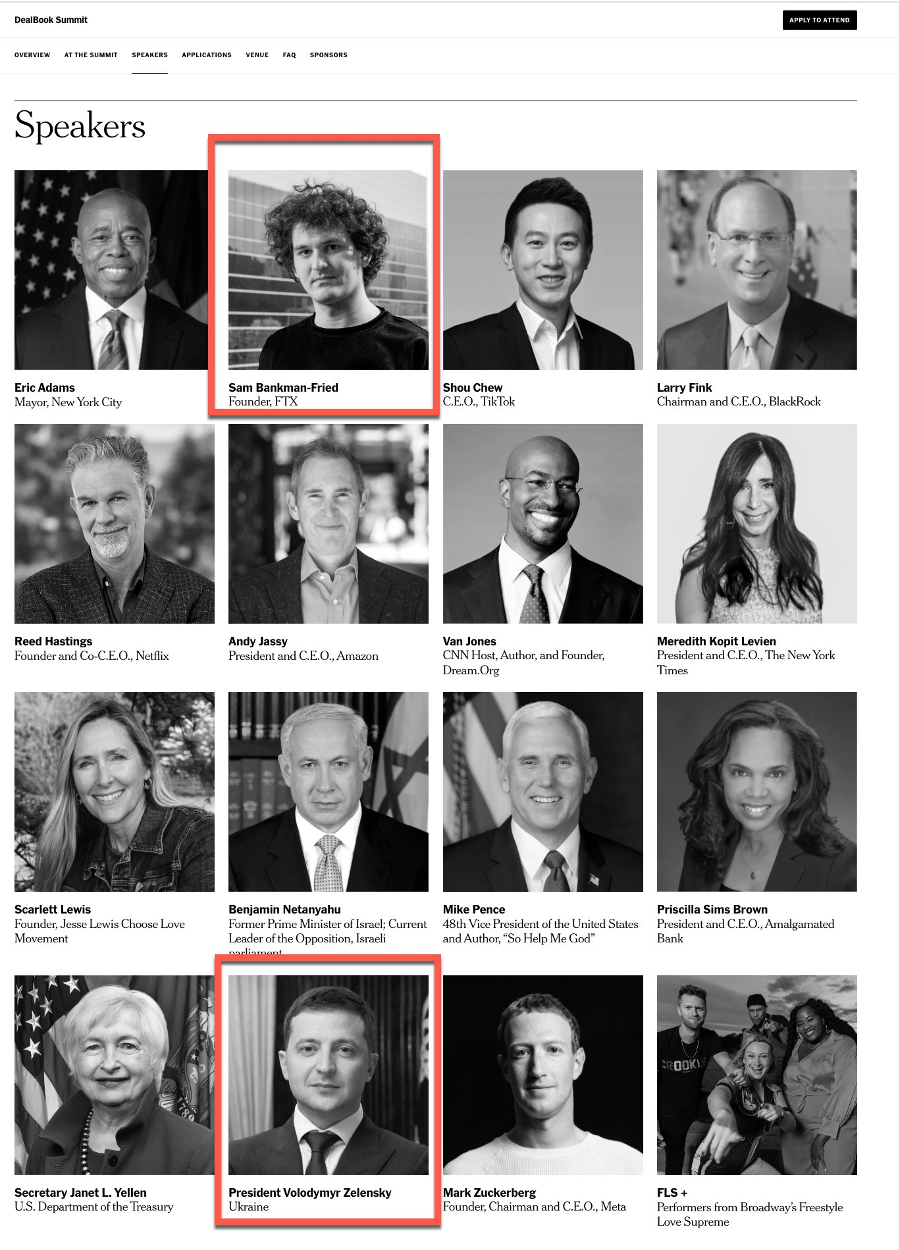 Heh… We should organize a reader pool where folks can guess how soon SBF will be removed from the agenda. In the meantime, you can get your yuks by refreshing the NYT webpage yourself. [Update: Ben Affleck was just added to the lineup and SBF is still there!]

As for crypto trading this morning, the flagship cryptos have cracked below support that held most of last week.

The selling might be linked to a decision by the crypto lending firm Genesis Global Capital to pause new loan originations and redemptions. That, in turn, is raising concerns about Genesis’ affiliated firm Grayscale — the outfit behind the closed-end fund Grayscale Bitcoin Trust (GBTC).

On Friday, Grayscale announced it would not share “proof of reserve” data with its customers “due to security concerns.” That said, Grayscale professes to keep all its Bitcoin on Coinbase — which holds customer assets 1:1 and has publicly-filed financial statements.

In any event, GBTC’s discount to the value of Bitcoin has swelled from 40% last week to 45% this week — which on paper makes it an even more compelling buy.

As for more conventional markets, the new week begins on a down note.

But the real sell-off action is in crude — down nearly five bucks as we write to $75.16, a level last seen in the earliest days of 2022. The proximate event is a Wall Street Journal story that Saudi Arabia and the other OPEC countries are looking to goose output at their next meeting set for Sunday, Dec. 4 — reversing some of the production cuts announced last month.

Bond yields are moving down, but the most important part of the “yield curve” remains inverted — a three-month Treasury bill yielding 4.22% while a 10-year T-note yields 3.78%.

“Every time this part of the yield curve inverts, a recession follows,” colleague Sean Ring reminds us at sister e-letter Rude Awakening.

You might know that already, but here’s what you might not: “More importantly, the recession followed once the curve returned to normal or positive territory.” And we’re not there yet.

With that in mind, the lone economic number of the day is a very reliable recession indicator — the Chicago Fed National Activity Index, crunching 85 disparate economic data points. Whenever the three-month moving average slips below minus 0.7%, that’s a sure sign of incoming recession.

But the October number is nowhere near that level — plus 0.09. Despite slumping GDP figures earlier this year, the actual recession is shaping up to be a 2023 story.

So much for the elite’s chatter about a “pandemic amnesty.” It appears vaccine passports are back on the table.

As you might know, the leaders of the G20 nations hobnobbed in Bali last week. At the end, they issued their “Leaders’ Declaration.”

Tucked into that document is a clause suggesting that to “facilitate seamless international travel,” member states should build on their previous work with “proof of vaccinations” and “digital COVID-19 certificates.”

No comment from the White House, but it would appear “no vax, no border crossing” is shaping up to be a thing. Maybe they’ll tie it into a CBDC?

For the record: The constantly moving target of a national rail strike is now fixed. It’s Friday, Dec. 9.

This morning, the engineers and conductors union revealed that a slender majority of its members rejected a contract proposal.

That means all 12 unions involved — representing 115,000 workers — have now had their say. Four of the unions turned down the deal and they’re back at the bargaining table — deadline Thursday, Dec. 8.

Without a deal, a walkout could come the following day — and the unions that voted to ratify won’t cross the picket lines of those that didn’t.

Reminder: A strike would snarl 40% of U.S. long-distance cargo and deliver a $2 billion-a-day hit to the economy.

“Dave, as a professional Journalist, why would you add a word in the middle of a sentence that doesn’t belong?” a reader writes.

Near as I can tell, he’s referring to this line at the end of our edition last Tuesday where I said, “At the very least I should reread a Robert B. Parker mystery like once every few months or something.”

The reader continues: “Just because all of American Millennials, and younger, can’t resist using the word ‘like,’ why in the world would you? Don’t you ‘proof read’ what you plan to send?

“Sorry for the late reply, but I’ve been traveling and just got internet access working again. Don’t take offense, it just drives me crazy when my younger friends start talking like teenagers.

The 5: I understand where you’re coming from with your complaint… but let’s not get too hung up on the evolution of colloquial English, 30-plus years after the whole valley-girl phenomenon brought “like” to the fore.

I was conveying uncertainty in a purposely conversational style, as if I was mentally reaching for something.

You wouldn’t have objected if I’d said, “At the very least I should reread a Robert B. Parker mystery, say, I don’t know, once every few months or something.” But I opted for “like” instead. Fewer words to convey the same idea! Don’t I get any credit?!