Pardon your editor’s outrage here, but…

The news agency that performed a bogus “fact check” on Paradigm’s Jim Rickards — without having the courage to call him out by name — damn near started World War III on Tuesday before backtracking yesterday. 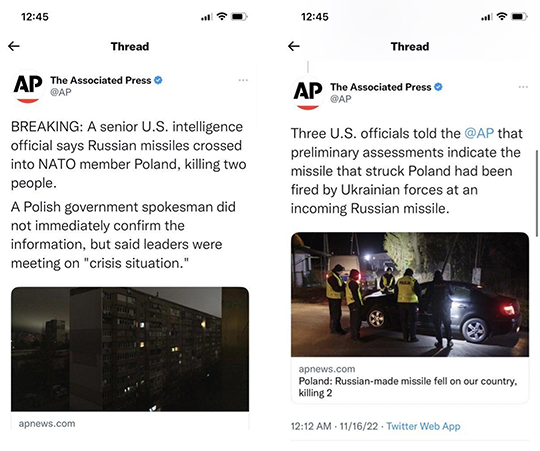 “This is why journalists are supposed to verify information before they report it,” tweets Ken Klippenstein — a real journalist. We told you earlier this month about his scoop revealing the extent to which the feds and the social media giants work hand-in-hand to censor what the government considers “misinformation” or “disinformation.”

If the AP’s editors had any integrity at all — and they don’t — they would out the “senior U.S. intelligence official” who burned them.

It’s with devotion to more old-fashioned journalistic values — values I sought to practice in the news biz for two decades — that today The 5 explores the connection between Ukraine and the collapsed crypto exchange FTX.

If you partake of conservative media, you’ve run across the accusation by now that taxpayer-funded U.S. aid to the Zelenskyy government in Ukraine was “laundered” through FTX, then returned stateside in the form of campaign contributions to Democrats.

Alas, there’s no smoking-gun evidence at this time to back up that claim. Yes, FTX co-founder Sam Bankman-Fried was the second-biggest donor to Democrats in the 2022 campaign cycle, behind George Soros. But that fact by itself proves nothing.

Still, it’s easy to believe there’s something hinky going on with Ukraine and FTX. But what, exactly? 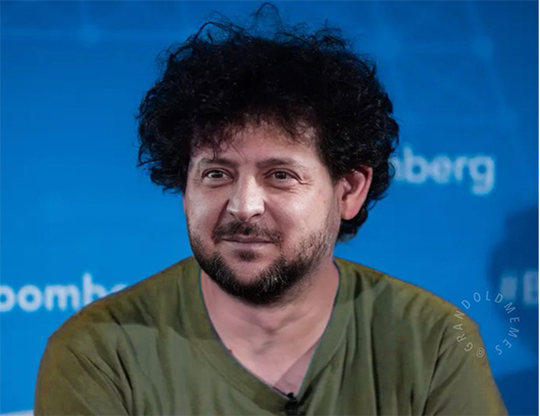 Some not-bad Photoshoppery there, and the olive T-shirt is a nice touch…

Ever since the FTX excrement-show began unfolding last week, we’ve been hoping someone would surface who was willing to do a deep dive on the Ukraine angle — but without a partisan axe to grind.

Reporter Kit Klarenberg of the leftist muckraking site The Grayzone has obliged.

“While mainstream media pores over the details of Bankman-Fried’s gargantuan crypto scam, not one single major outlet has investigated or even acknowledged FTX’s relationship with the government of Ukraine,” Klarenberg writes.

“Were client holdings unaccountably and illegally funneled into the West’s proxy war? Or did the supposed aid FTX sent to Kyiv find its way into the hands of Ukrainian scammers, corrupt warlords and illicit actors?”

We know this much: Sam Bankman-Fried, aka “SBF,” pledged to #StandWithUkraine the day Russia invaded. 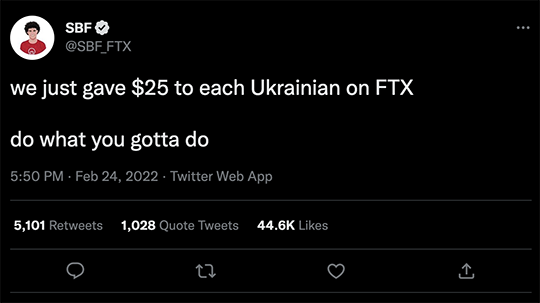 Less than three weeks later, on March 14, the Ukrainian government rolled out a webpage called Aid for Ukraine where people could donate crypto for the cause.

As CoinDesk reported at the time, FTX promised to “convert crypto contributions to Ukraine’s war effort into fiat for deposit” at the National Bank of Kyiv. From there the Ukrainian government could “turn Bitcoin into bullets, bandages and other war materiel.”

Coincidentally or not, the Aid for Ukraine web page vanished shortly before the FTX scandal went public.

But you can still pull it up on the Internet Archive…

“Once it was deleted, the Ukrainian government created a stand-alone website on Nov. 1 to promote the endeavor. The page was identical, and quotes from Bankman-Fried, and references to FTX’s involvement and its logo, remained in place until the morning of Nov. 15” — two days ago, when Klarenberg posted his story.

As of yesterday, FTX and SBF had been scrubbed from the site — heh.

So just how much money did Aid for Ukraine raise? And how was it spent?

As of April 1, the old Aid for Ukraine webpage claimed to have raised “more than $70 million” from crypto donors. But on April 6, the total was revised lower to “more than $60 million.” That total remained unchanged until the page went dark on Oct. 26.

As for the expenditures, the new website offered additional detail… but only raised more questions.

As Klarenberg reports, “A breakdown of spending on the new Aid for Ukraine website states Kyiv had spent a total of $54,573,622 in cryptocurrency donations by July 7 on a wide variety of equipment, vehicles, drones, ‘lethal equipment’ and other resources.”

“This leaves a gap of at least $5.5 million in the money Aid for Ukraine claimed to have raised in its initial weeks, and the funds it says it distributed in Ukraine.”

We’ll add a bit of background to Klarenberg’s reporting.

During that April 14-July 7 span in which the conflict sank into a “bloody war of attrition,” the stablecoin called Luna collapsed. Its value was pegged to the U.S. dollar; it broke the peg starting on May 9 and was all but worthless a week later.

Knowledgeable crypto hands suspect that FTX had considerable Luna exposure… and in retrospect, Luna’s collapse was the beginning of the end for FTX.

In The 5’s voluminous archives, we find some Monday-morning quarterbacking by Bankman-Fried that’s even more interesting now than it was six months ago… 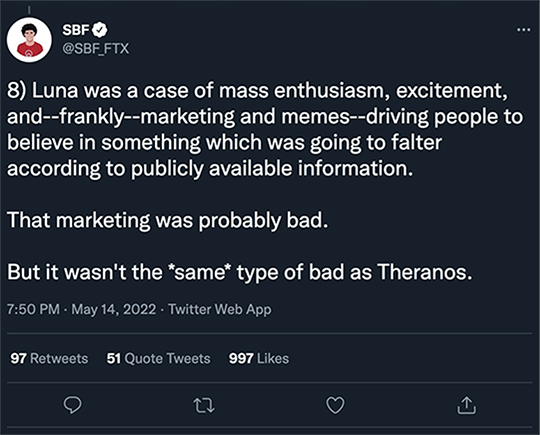 SBF was rightly roasted for that remark.

As crypto entrepreneur Cory Klippsten put it, “If you believe this: ‘something which was going to falter according to publicly available information’ then why did you list it?” [Emphasis ours.]

Coincidentally or not — yeah, we know we’re invoking that phrase more than once today — the Aid for Ukraine expenditures all but dried up in the same timeframe as Luna’s collapse.

The unanswered questions, Klarenberg writes, can be boiled down to the following…

“Namely, why the funds purportedly raised appear to have decreased in a span of a few days, why no donations have been received since then on the Aid for Ukraine webpage or its new website, how much has been donated since the alleged initial influx and where did the rest of the money go?”

We may or may not know in the fullness of time. Sorry if that answer is less than satisfying, or if it doesn’t confirm your biases. All we can do is examine the available facts… tease out where they might lead… and stay on top of any new developments. So stay tuned…

The flagship cryptos are once again looking resilient despite more FTX contagion — specifically, the near-collapse of a smaller crypto brokerage called Genesis.

Gold is losing ground after several days of treading water — down 16 bucks to $1,757. Alas, sliver’s getting whacked — back below $21.

Crude is taking an even bigger hit — down 4.4% and below $82 a barrel for the first time in nearly a month. OilPrice.com attributes the move to the fact that, as we noted off the top today, the start of World War III has been postponed.

There’s a disturbing theme to the day’s economic numbers.

Begin with housing starts and permits: They came in better than expected. Still, starts of new homes fell 4.2% in October, and permits fell 2.4%. Demand is higher for more-affordable multifamily units than single-family homes.

Did we say affordable? Reminds us of a meme we ran across the other day… 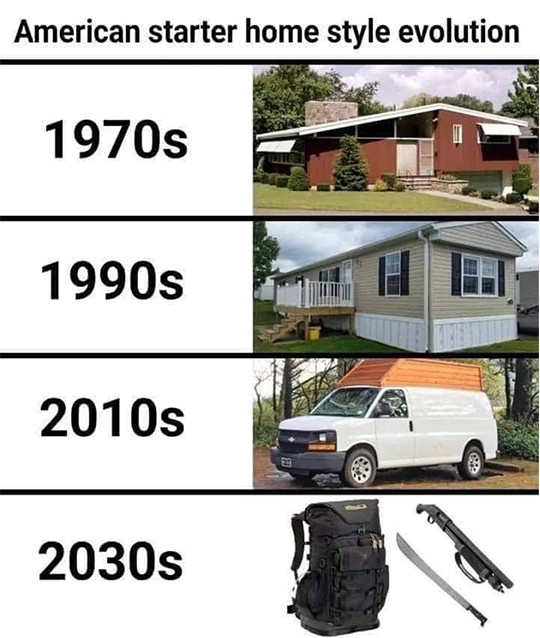 Back to today’s numbers: “There are still new residential building projects in the pipeline,” says an Econoday summary, “but at the lowest pace since the period immediately before the start of the pandemic in 2020 and into the first months when restrictions on activity made building difficult.”

Meanwhile, factory activity in the mid-Atlantic is slowing down big-time, according to the Philadelphia Fed manufacturing index. At minus 19.4, the number is the lowest since — well, since lockdown in early 2020. Hmmm…

Your government in action: The Pentagon has failed an audit for the fifth year in a row.

That is, there’s evidence of “misrepresentation” in its financial records, and the records aren’t in keeping with established standards. Pentagon Comptroller Mike McCord said compared with the previous year, what he sees is “not the progress I would have hoped for.”

And with billions’ worth of weapons flowing to Ukraine now, he says the urgency is greater than ever: “To me it’s a really great example of why it matters to get this sort of thing right, of counting inventory, knowing where it is and knowing when it is [arriving].”

The audits began in 2017 — the latest in a series of efforts to somehow keep track of the Defense Department’s books that dates back to 1990. The Pentagon says it hopes to have the books in order by 2027. Yeah, dream on…

“Paradigm’s deluge of emails,” says the subject line of a reader’s correspondence.

“I joined Jim Rickards’ Countdown to Crisis and The Situation Report a few weeks ago. Ever since then my email box has been inundated with emails from not just Jim Rickards but many others.

“Here is some feedback: Most of the emails have the word ‘URGENT’ in the title. Here’s the problem: When EVERYTHING is URGENT, then nothing is urgent.

“The amount of repetition in these emails is staggering. You must think your clients are pretty stupid that they need to hear something 10 times before understanding your message.

“The issues above have me second-guessing that I joined these publications.”

The 5: First, we hope the recommendations you’re getting in those two premium advisories are helping you fortify and grow your portfolio.

Please bear in mind that we can generate our analysis and recommendations only with a reliable source of revenue.

And as we explain from time to time, nearly all of our revenue comes from the subscription fees of readers like you. We don’t take money from companies to flog their stock, and we don’t operate like CNBC or other outlets that forever spin their content to avoid offending their advertisers.

You’re right: When everything is urgent, nothing is urgent. Our copywriters and marketers are keenly aware there’s a risk of saturation with messages that relentlessly grab you by the shirt collar.

So thank you for the reality check. Anecdotes like yours are a valuable supplement to the many metrics we rely on… and those measurements definitely tell us when we push the envelope too far.

The marketplace is a powerful thing… and rest assured we’re attuned to it.