“This dramatic change has become national law,” he says, but “unless you’re a Washington insider, you’re not supposed to know.

“It’s all tied up within three new laws: the Inflation Reduction Act, the Infrastructure Act and the CHIPS Act. If you thought these laws were about reducing inflation, building infrastructure and making computer chips in the U.S., you are maybe 15% right,” he notes.

“As in, it’s extremely unlikely that anyone in their right mind will ever again build a new oil refinery in the U.S.,” Byron says, “nor will they build any new fossil fuel power plants either — meaning nat-gas or coal.

“What the three laws do, in connection with each other, is offer massive subsidies, called investment tax credits (ITCs), to build out solar and windmill systems.”

Byron forecasts that “windmills and solar will pay out over time, based on subsidies and mandatory purchase requirements, while fossil fuel competition will be strangled for capital.

“Meanwhile, the U.S. government has recently begun a massive new program for offshore development of windmills off of the East, West and Gulf coasts.

“And we’re not talking about those ugly 150-200 foot windmills you see on mountain ridges and prairies across the landscape. No, these are massive 400-500 foot towers intended for offshore, continental shelf areas. 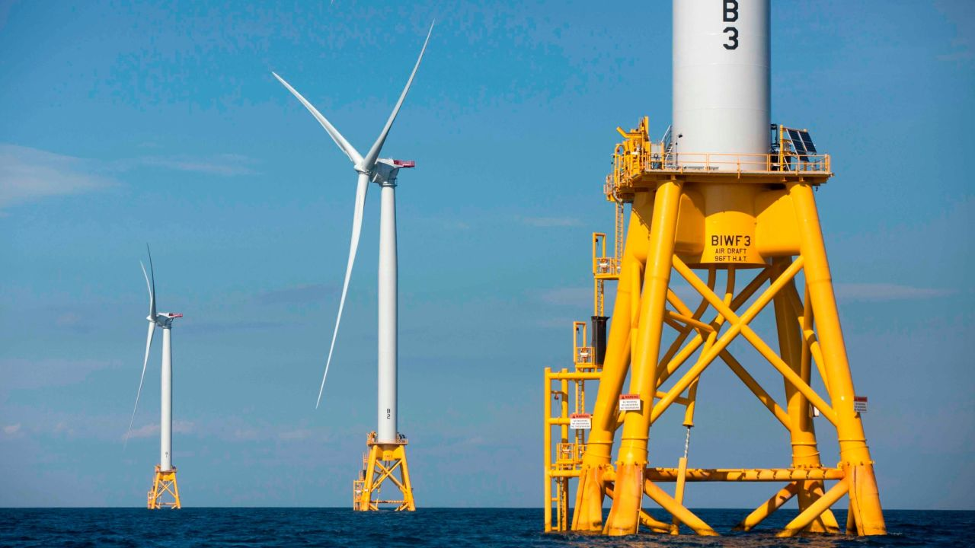 “Some of these beasts are so massive, and intended for deepwater, that they will not even be affixed to the seafloor but will float in the oceans, especially offshore California and Oregon.

“In essence, we’re looking at a multihundred-billion dollar (okay, trillion dollar) government effort to drive investment out of oil and gas,” says Byron, “both onshore and offshore, and into so-called ‘renewable’ systems.

“Of course, these new systems will require ungodly amounts of metal and machinery that the U.S. economy doesn’t produce, but that’s part of the idea as well — supposedly, to kick-start a new supply chain.

“However, in the near to medium term,” he notes, “the primary supplier for many of the critical elements, parts, components and systems that go into the guts of these complex devices come from, yes, China. Gee, imagine that!

“It’s all [courtesy of] the U.S. government… because they’re here to help,” Byron says, tongue firmly planted in cheek, as he promises updates in the weeks ahead. But his premise is certainly unique — that new legislation is in place for a full-court press on renewables. Even if it’s not being advertised that way…

Crude rebounded quickly after we published yesterday, when the Saudi Arabian energy minister denied the WSJ report that OPEC countries are looking to juice output at their next meeting on Dec. 4, reversing production cuts announced in October.

The People’s Bank of China (PBOC) is believed to be behind a massive gold-buying spree — at levels not seen since the 1960s.

According to the World Gold Council, central banks bought a net 399.3 tonnes of gold in the third quarter of 2022. 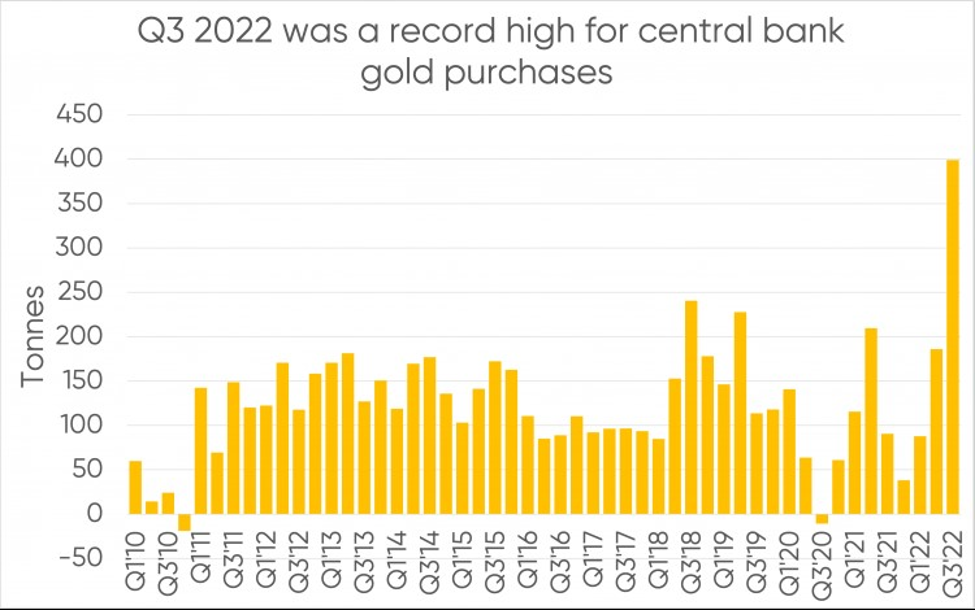 “The latest amount marks a steep jump from 186 tonnes in the preceding quarter and 87.7 tonnes in the first quarter, while the year-to-date total alone surpasses any full year since 1967,” says an article at Nikkei Asia.

And while the PBOC is notoriously reticent about reporting its gold purchases — the central bank hasn’t reported since September 2019, in fact — the article deduces China alone might have purchased up to 300 tonnes of gold.

“China likely bought a substantial amount of gold from Russia,” adds market analyst Itsuo Toshima. “Seeing how Russia has been hit by monetary sanctions by the West, China… must be hurrying to reduce dependence on the dollar,” the article concludes.

“This year will be a very interesting season both for holiday shoppers… and investments in retail companies,” says Paradigm’s retirement and income specialist Zach Scheidt.

“This may be bad news for retailers that sell high-priced goods to middle-class consumers,” he says. “But it’s great news for companies that focus on selling quality merchandise at low prices.

“And thanks to the supply chain problems from last year, many retailers placed duplicate orders, and now name-brand retailers have been challenged by inventory issues.”

For example? “I recently wrote about how bad news for Nike’s inventory is good news for two retail stocks…

“Retailers like TJX Companies (TJX) and Ross Stores (ROST) benefit from this situation,” Zach says. “Both of these retailers buy excess merchandise from companies like Nike.

“They’re able to get a great deal because these companies simply need to get rid of their excess product — at almost any cost.

“This allows TJX and ROST to mark down prices and sell great merchandise at low prices,” he notes. “And that business model is paying off in spades as consumers look for holiday shopping deals.

“Just recently, shares of ROST vaulted higher after the company reported earnings and issued strong guidance for the rest of the year.

“Both of these stocks are trending higher and could have much farther to go. So as we move into the holiday season, make a gift list and check it twice…

“Consider shopping at discount stores like ROST and TJX (they’ve got some great merchandise this year),” Zach concludes, “and make sure you’re invested in the right retail stocks to help grow and protect your wealth.”

Since we’re a couple days away from Thanksgiving, we engage in our annual tradition — dunking on the typical cost of a turkey dinner as calculated by the American Farm Bureau Federation (AFBF).

Every fall, this trade group sends about 150 volunteer shoppers across the country (and Puerto Rico) to check grocery store prices of turkey, stuffing, sweet potatoes, cranberries, etc. No coupons or special promotions allowed. 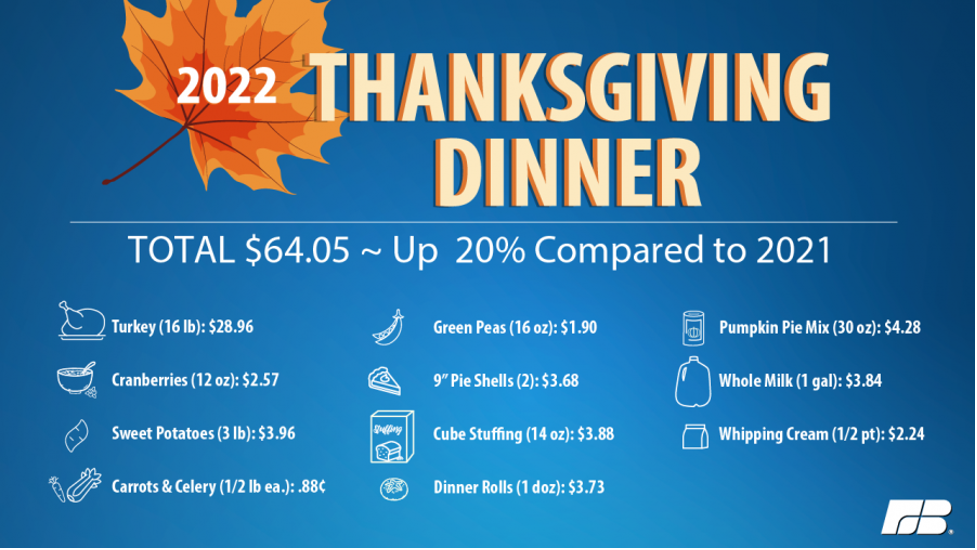 If this grocery bill seems on the chintzy side to you, we’re in total agreement. But it’s in the Farm Bureau’s best interest to come up with a lowball estimate made possible by Big Agriculture — or as one reader told us in 2016, “a Monsanto-laced GMO special Thanksgiving dinner that glows under a blacklight.”

Be that as it may, according to the AFBF, the price of turkey per pound has decreased as we approach the holiday, down to 95 cents (Nov. 10-16) versus $1.81 when the volunteer shoppers were dispatched (Oct. 18-31). “This means consumers who have not yet purchased a turkey should be able to find one at a lower cost than the Farm Bureau average,” says the AFBF.

Considering the political climate and culture wars, now more than ever, we need a substantial dram of “social lubricant” to help break bread with — ahem — certain overly opinionated family members. And on $64.05? Yeah, that’s not gonna cut it…

“You forgot how the Social Security Administration defrauded Americans when it suckered them into taking Social Security early,” a reader writes. “The promise? You could pay back the funds you had taken out if you later decided taking SS early had been a mistake.

“At the time, taking SS benefits early seemed like a no-brainer. But the SSA made a policy change, without any warning, for anyone who had been taking SS for, I believe, over one year. This happened the day after I decided to pay them back, collect the tax refund I’d paid on the SS income for one year and further delay taking any SS benefits until later at the higher rate later.

“This change to what they had previously promised (I had even confirmed that policy, in writing, on the SSA website) happened sometime around 2012, and was retroactive for those of us who had been suckered. The AARP did nothing to fight or even publicize this fraud, although they were well aware of it. It would not have been fraud had their change in policy not been made retroactive, or if the change hadn’t been done in secret and without any prior warning. If you don’t believe me, check it out.”

The 5: From what we can find, the SSA announced the rule change on Dec. 8, 2010, providing a 60-day period for public comment. (Not that it was necessarily well-advertised.)

And according to the SSA, the 12-month rule was put in place because folks were treating SSI benefits like a “free loan.” (Their words.)

Today, you can still apply to receive your Social Security benefits at age 62 and before full retirement age. But that 12-month rule is a real bear… and still catches people unaware.

So, if you change your mind about receiving SSI, you should do so before the end of 12 months. You’ll still need to pay back the money, but “the Social Security Administration then treats it like you never enrolled, and your monthly check can continue to grow until you start taking benefits again,” Kiplinger reports.

Also note: You can only change your mind about when to receive SSI once “per lifetime,” says the SSA. Also note? We’re not financial planners; they should know all the intricacies of Social Security rules.

On that note, take care… And join us tomorrow for another episode of The 5.

P.S. As mentioned yesterday, we’ve been keeping an eye on the NYT’s DealBook Summit’s webpage to see if Sam Bankman-Fried has been erased from the list of guest speakers. We’re amused — and bemused — to report his wild-haired image is still posted. Currently it’s next to a pic of a just-added guest speaker, “sad” Ben Affleck. Write in with your guess on whether, and when, SBF will be canceled from the summit’s roll…