“This is Mr. Market smoking the hopium again,” colleague Sean Ring writes at our sister e-letter The Rude Awakening.

As we mentioned yesterday, Federal Reserve chair Jerome Powell was due to deliver a Big Important Speech ahead of the Fed’s next decision on interest rates Dec. 14.

No sooner did Powell open his yap at 1:30 p.m. EST than the media “embargo” on the text of the speech was lifted. There was a strange discord to the instant headlines — the Financial Times clearly out of step with The Wall Street Journal and CNBC.

But that can’t be the whole story, right? The Fed has signaled for weeks that it was done with three-quarter percentage point jumps and a half point was in the bag for December.

Sean suspects a different expectation is at work now — that the Fed will be done raising rates altogether after this month.

“If the market took yesterday’s speech for ‘no hikes in 2023,’ then I think Mr. Market will need some Valium come January,” Sean quips.

Especially after the Commerce Department issued the Fed’s preferred inflation measure this morning. “Core PCE,” it’s called — and it’s up 5.0% year-over-year in October.

Which is no different than it was three months earlier — or for that matter, last December. 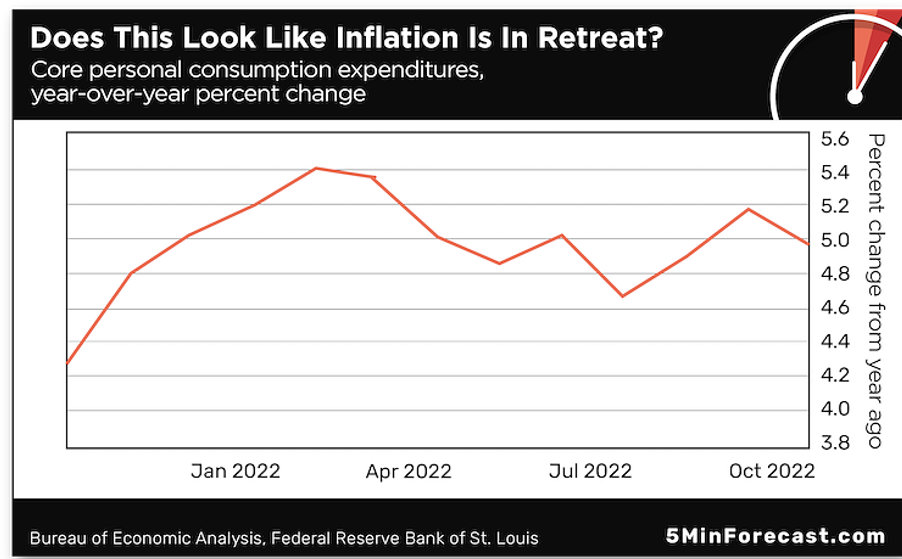 Assuming the Fed raises a half point on Dec. 14, another half point is likely at the following meeting on Feb. 1. That would make the fed funds rate equal to core PCE — assuming core PCE keeps chopping around the 5% level as it has since last spring.

At the very least, that would necessitate another increase of a quarter or half point at the Fed meeting on March 22.

So no — if the market thinks the Fed will be done raising rates at the end of this year, it’s sadly mistaken. Whenever reality hits, all of yesterday’s big gains could be wiped out — and then some.

[Ed. note: Even if our outlook is wrong, and stocks have only higher to go from here, there’s a different asset class that’s set to massively outperform in 2023.

And we’re not talking about bonds or commodities or crypto. No, three of our editors with wildly divergent outlooks on the market — Jim Rickards, James Altucher and Ray Blanco — all agree the place to be right now is a recession-proof niche most retail investors never think about.

And now is your chance to invest right alongside them — thanks to a major change we’re making to our business. If you want to be the first to learn how to “partner up” with Jim and James and Ray… we urge you to join them for an exclusive event tonight at 7:00 p.m. EST.You can still reserve your spot with just a click of the mouse at this link.]

As it is, the stock market is already giving up a little bit of the ground gained yesterday.

For no obvious reason, precious metals are rallying hard — gold past $1,800 and silver past $22.50. We have zero faith this move will stick: If the stock market is due for a fall, gold will fall with it as deep-pocketed investors unload whatever’s most liquid to raise cash. A plunge in the S&P 500 to, say, 3,300 would send gold down toward $1,600. (Eventually this correlation will break, for reasons we laid out last winter — but not just yet, we suspect.)

Bond yields are falling; the 10-year Treasury note is down to 3.57%, the lowest in over two months. The yield curve remains steeply inverted — even a 30-day T-bill earns 3.9%.

➢ Apart from core PCE, the big economic number today is the ISM manufacturing index — which suggests the U.S. factory sector is shrinking for the first time since lockdown in spring 2020. At 49, the number has slipped below the 50 dividing line between growth and contraction. The internals of the report are worse; new orders have fallen from 49.2 to 47.2.

Despite what you might have heard on the news, a resolution to the impending national rail strike is not a done deal.

While the U.S. House easily passed a measure yesterday ramming through a contract deal for all 12 freight rail unions… passage in the Senate looks more dicey.

Any bill would likely need 60 votes to survive a filibuster… and the Beltway buzz is that Senate Republicans are reluctant to have government horn in on a contract negotiation. (Oh sure, now the GOP finds its free-market religion.)

The rail contract might even get tangled up in talks aimed at averting one of those “partial government shutdowns” — set for Friday, Dec. 16 if Congress can’t come to terms on a budget deal.

So for now, there’s still a distinct possibility of a national freight rail strike starting a week from tomorrow.

Railroads are already preparing: American Fuel and Petrochemical Manufacturers says its members have been notified that shipments of hazardous chemicals will be halted by the end of this week. (Can’t have them just sitting abandoned in a tanker car mid-journey, right?) And the EPA warns that would include chemicals needed for water treatment. Good times, huh?

Crypto prices are looking their strongest in several days, notwithstanding the embarrassment of an “interview” with FTX co-founder Sam Bankman-Fried.

“I didn’t ever try to commit fraud on anyone,” SBF said predictably at The New York Times’ “DealBook Summit” yesterday. (He appeared via video from the Bahamas.) He even denied knowing the full extent of the risky bets placed by FTX’s affiliated firm Alameda Research — the outfit that “borrowed” FTX customer funds to place those bets.

To the extent he got anything resembling a tough question, he hemmed and hawed, dodged and dissembled. “He at times seemed sketchy in detail,” says a generous account from the BBC.

One Twitter controversy resolved… several others still up in the air.

When last we left the Twitter saga on Monday, new owner Elon Musk complained that Apple had slashed its advertising buys on Twitter and that — more important — Apple was threatening to boot Twitter from its App Store. For several days now, “woke” activists and journalists have been pressuring Apple to take that step because Twitter under Musk is supposedly too loose with “hate speech” and “misinformation.” 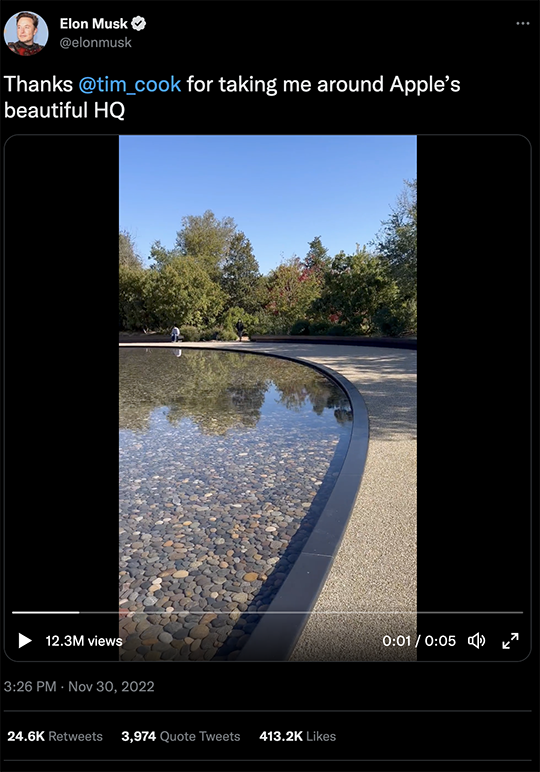 “Good conversation,” Musk tweeted. “Among other things we resolved the misunderstanding about Twitter potentially being removed from the App Store. Tim was clear that Apple never considered doing so.”

Those sound totally contradictory to us, but we’re not EU bureaucrats. Violators of the law are subject to penalties up to and including an outright ban.

Speaking at the same New York Times event where SBF appeared yesterday, she was asked whether Twitter’s foreign ownership should be reviewed by the government body called the Committee on Foreign Investment in the United States.

“We don’t comment on work that’s in progress,” she said. “But if there are such risks, it would be appropriate for CFIUS to have a look.”

Oy. For over a decade, no one in the U.S. government gave a hoot about the Twitter stake held by Saudi Arabia’s Prince Alwaleed bin Talal — until Musk took control of the company this year.

And for the feds to make these threats at the same time they’re granting Saudi Arabia’s crown prince immunity from a lawsuit for ordering the murder of the American-based journalist Jamal Khashoggi?

What’s with the utter failure of the Germans to guard valuable gold coins?

More than five years ago, we chronicled the theft of a ginormous gold version of a Canadian Maple Leaf from the Bode Museum in Berlin — an impressive feat considering it weighed 220 pounds and at the time was worth $4.05 million.

It turned out to be an inside job — pulled off by a museum employee and three friends. The coin was never recovered; it was likely cut up and melted down.

And now there’s this… 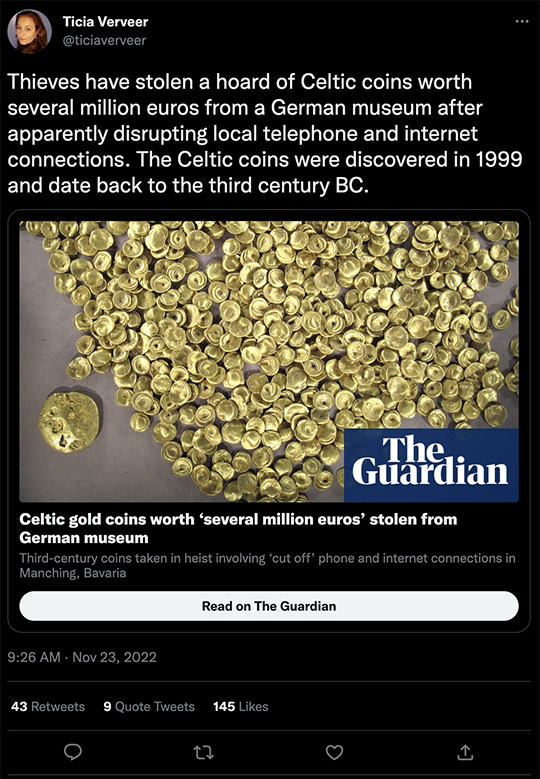 “Thieves who broke into a southern German museum and stole hundreds of ancient gold coins got in and out in nine minutes without raising the alarm,” reports The Associated Press, “in a further sign that the heist was the work of organized criminals.”

It appears the thieves disabled the alarm system by cutting the phone and internet lines less than a mile away from the Celtic and Roman Museum in the Bavarian city of Manching. Oh, and there was no guard on duty.

Archaeologists hope the thieves know what valuable artifacts they have on their hands. “The worst option, the melting down, would mean a total loss for us,” says Rupert Gebhard, head of the Bavarian State Archaeological Collection.

But if you’re a thief and your cost of acquisition is zero, or close to it? Probably doesn’t matter much, does it?