As if Recession’s Not Bad Enough…

“Is there a financial calamity worse than a severe recession in early 2023?” asks Paradigm Press macro maven Jim Rickards.

“Unfortunately, the answer is yes and it’s coming quickly.”

Jim is back with us today for what you might call a “Part 2” of his 2023 predictions. Part 1 on Friday projected a “severe” recession by midyear — tanking the stock market by 30% or more amid persistent inflation and positive real interest rates that will propel gold higher.

For our purposes in Part 2 today, it’s important to make the distinction between a recession and a financial crisis.

It’s tempting to think the two go hand-in-hand. But that’s just recency bias at work, thanks to the debacle that was 2008.

Meanwhile, there were two financial crises in the 1990s — one brought on by Mexico’s devaluation of the peso in 1994 and another brought on by a Russian government default in 1998 — but neither event was accompanied by a recession.

(Which is why, even if you were an adult at the time, you might not remember them at all.)

Unfortunately, Jim says a 2008-style convergence of a recession and a financial crisis is all too likely this year.

“Global financial crises,” he explains, “emerge suddenly and unexpectedly to most market participants, although there are always warning signs for those who know where to look. They usually become known to the public and regulators through the failure of a major institution, which could be a bank, hedge fund, money market fund or commodity trader.

“While the initial failure makes headlines, the greater danger lies ahead in the form of contagion. Capital markets are densely connected. Banks lend to hedge funds. Hedge funds speculate in markets for stocks, bonds, currencies and commodities both directly and in derivative form.

“You get the point. The linkages go on and on.”

And the vulnerabilities are there, right now — even if they’re not making headlines yet.

“The Federal Reserve,” Jim says, “has printed $6 trillion as part of its monetary base (M0). But the total notional value of the derivatives of all banks in the world is estimated at $1 quadrillion. For those unfamiliar, $1 quadrillion = $1,000 trillion. This means the total value of derivatives is 167 times all of the money printed by the Fed.

We can hear you as you’re reading: “Yeah, yeah, but what are the signs that something is about to go pear-shaped?”

One of the strongest signs is one we’ve discussed through much of 2022 — an inverted yield curve.

“If I lend you money for 10 years, I want a higher interest rate than if I lend it for two years to compensate me for added risks from the longer maturity such as inflation, policy changes, default and more.

“When a yield curve is inverted, that means that longer maturities have lower interest rates. That happens, but it’s rare. It means that market participants are expecting economic adversity in the form of recession or liquidity risk. They want to lock in long-term yields even if they’re lower than short-term yields because they expect yields will be even lower in the future.”

The yield curve is severely inverted right now. As we write this morning, Uncle Sam will pay you 4.89% on a six-month Treasury bill. But if you lend Uncle Sam money for the next 30 years, you’ll get a yield of only 3.73%.

And while the trouble starts with the yield curve, it doesn’t end there.

“Other ominous signs,” according to Jim, “include sharp declines in the dollar-denominated reserve positions in U.S. Treasury securities of China, Japan, India and other major economies.

“Naïve observers take this as a sign that those countries are trying to ‘dump dollars’ and dislike the role of the dollar as the leading global reserve currency. In reality, the opposite is true. They’re desperately short of dollars and are selling Treasuries as a way to get cash to prop up their own banking systems.” (This is another manifestation of the great “dollar shortage” Jim described to us late last year.)

Under those conditions, “all it takes to collapse the system is a shock failure leading quickly to panic.”

Stick with The 5 throughout 2023 as Jim keeps an eye out for additional warning signals — and develops an action plan so you can weather the storm.

[Ed. note: If you’re looking for the absolute best asset class to put your money into under these conditions… well, Jim says it sure isn’t stocks or bonds or crypto. And once you’ve got his recommended 10% portfolio allocation in gold, then what?

Well, it’s something that very soon will be legally closed to new investors for 12 months — by federal law.

So there’s only a limited time in which to act — as you’ll see in this short explanation from our vice president of publishing Doug Hill.]

To the markets — which for the most part are treading water.

The big company-specific news in the United States is more cost cuts at the nearing-bankruptcy Bed Bath & Beyond. In Europe, the focus is on Germany’s Bayer — where the U.S. activist investor Jeff Ubben is demanding a new CEO be hired from outside the company. As we anticipated in 2018, Bayer is paying a severe price for its takeover of lawsuit-magnet Monsanto — a star-crossed acquisition we compared to Halliburton’s takeover of Dresser Industries in the 1990s under CEO Dick Cheney.

Crypto is rallying despite still more bearish news from the space — today it’s Coinbase cutting 20% of its personnel. Bitcoin is at $17,326 and Ethereum at $1,332, both on the high end of their trading range since the collapse of FTX two months ago.

➢ Fed-watching: As we mentioned last week, Fed chair Jerome Powell was set to deliver a speech today. But as it turns out, he didn’t address monetary policy. He did, however, subtly brush off pressure from the diversity-equity-and-inclusion crowd — saying the Fed should “not wander off to pursue perceived social benefits that are not tightly linked to our statutory goals and authorities.”

The holiday cancellation debacle notwithstanding, Southwest Airlines (LUV) is a buy in the estimation of Paradigm’s retirement specialist Zach Scheidt.

As you’re likely aware, Southwest canceled more than 16,700 flights over the holidays, thanks to what NPR calls “severe weather, staff shortages brought on by the pandemic and an outdated computer system.” (The reality is that Transportation Secretary Pete Buttigieg dropped the regulatory ball… but in the hyper-partisan media environment of the moment, that was reported mostly by the likes of Fox, the New York Post and Newsmax.)

LUV shares sank to $32 amid the chaos; they’re already bouncing back past $35 and Zach sees more upside from here…

“Whenever I see a situation like this where a stock trades sharply lower because of a specific event related to a company, I start asking questions like:

Last Friday, Southwest warned that the fiasco would cost the company up to $825 million. But Zach sees it all as short-term turbulence.

“The stock is currently trading near $35.50,” he says, “and the company is expected to earn $3.19 per share this year. That means you can buy shares of LUV for just over 11 times next year’s profits, an enticing value for this growing company.

“Looking further down the road, Wall Street analysts expect LUV to earn $4.17 in 2024, meaning profits should grow by about 31% over the next year” as more people resume pre-pandemic travel habits.”

Zach’s bottom line: “The holiday pullback for LUV appears to be more of a buying opportunity than a signal that something is fundamentally wrong with the company.”

“Small-business owners are not optimistic about 2023 as sales and business conditions are expected to deteriorate,” says Bill Dunkelberg, chief economist at the National Federation of Independent Business.

The NFIB is out with its monthly Small Business Optimism Index — which tumbled in December from 91.9 to 89.8, a bigger drop than expected. The number spent all of 2022 below its long-term average going back to the mid-1970s.

Nearly one-third of survey respondents — 32% — identified inflation as their single-most important problem. But good help remains hard to find, with “quality of labor” cited by 23%. Taxes, cited by 11%, are the only other category in double-digit territory.

Unfinished business from the 2021–22 session of Congress: The $1.7 trillion “omnibus” obscenity passed just before Christmas includes an unwelcome surprise for higher-earning Americans over age 50.

The good news is that the law expands the provisions for “catch-up contributions” by over-50 workers. Starting in 2024, the annual limits will finally be indexed to inflation… and workers age 60–63 will see even more generous contribution maximums.

On the other hand… starting in 2024, for workers earning over $145,000, all catch-up contributions will go into a Roth account. In other words, those contributions will be taxable income. Uncle Sugar wants his revenue and he wants it now.

Yes, Roth accounts have the advantage of tax-free withdrawals in retirement — for now. But for the better part of a decade, we’ve been wary that Congress can change the Roth rules at any time. In an extreme scenario, all the capital gains and dividends in your Roth could be made subject to income tax.

The one saving grace from this change: The $145,000 income threshold will rise with inflation each year.

Stupid marketing tricks: The head of the Scottish brewery BrewDog is reaching into his own pocket for a promotion that overpromised… by a lot. 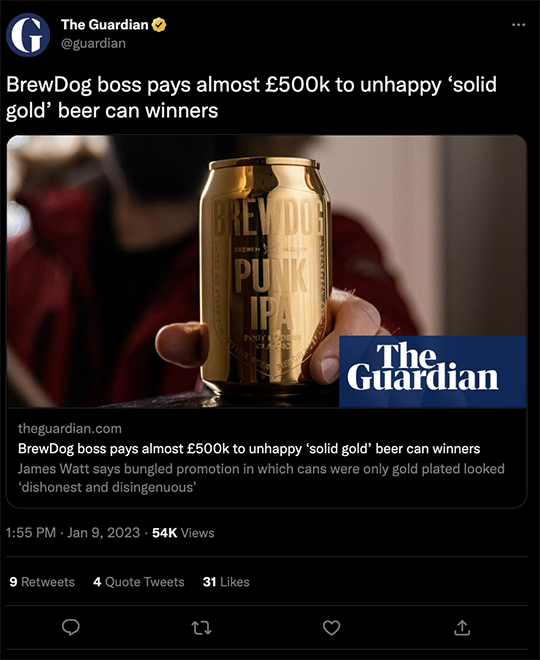 By BrewDog co-founder James Watt’s own admission, the campaign came off as “dishonest and disingenuous.”

As The Guardian reports, “Watt said he got so personally carried away with the Willy Wonka-inspired promotion, which hid 50 gold cans in cases of beer, that he made some ‘costly mistakes’ that misled treasure hunters.”

At issue was a series of tweets he issued during the stunt in 2021 — describing the cans as “solid gold.”

Nope, they were gold-plated brass. Oops.

“It was a silly mistake,” Watt writes on LinkedIn. “Things started to go wrong when the winners got their cans.” Some of them contacted the Advertising Standards Authority — the British ad industry’s self-regulator.

More from The Guardian: “The chief executive said he went on to contact all 50 winners to offer them the ‘full cash amount’ as an alternative if they were unhappy with the original prize of keeping the can and receiving £15,000 [$18,225] in BrewDog shares.”

Customers returned about 40 of the 50 cans to Watt. Which ought to make the remaining 10 mighty valuable as collectors’ items, above and beyond the metal value, no? Hmmm…