As Nomi says: “Debt is crushing our nation.” Pithy. She continues: “Our nation’s debt ratio relative to the size of our economy (GDP) is nearing an almost historic high of 108%. That’s almost double what it was just before the [2008] financial crisis.”

Looked at from another perspective, about $2,000 of your tax dollars will be skimmed off the top to cover the national debt’s rapidly snowballing interest. Nomi points out: “That interest will eclipse Medicare by 2020 and the defense budget by 2025.”

To say nothing of corporate debt, something Nomi’s been warning readers about for weeks now. And mainstream financial outlets are finally catching up…

According to Bloomberg, NYU Professor Emeritus Edward Altman’s Z-score predicts whether a company is on the road to bankruptcy. So far this year, 30 U.S. companies — “with liabilities exceeding $1 billion” — have filed bankruptcy… with another 30 waiting to join their ranks by year-end, Altman predicts.

And the handwriting was on the wall: “There was a huge buildup in corporate debt by the end of 2019 and I thought the market would gain some much needed de-leveraging with the COVID-19 crisis,” says Altman. “Now [it] seems like companies again are exploiting what seems to be a crazy rebound.”

To wit, companies globally have sold $2.1 trillion in bonds this year, a record, almost half coming from the U.S… 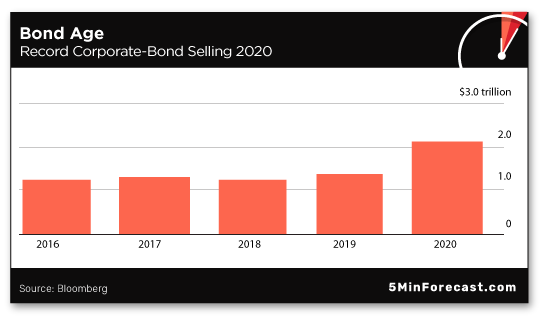 Aided and abetted by none other than the Federal Reserve that’s now unabashedly buying corporate bonds in — as Nomi mentioned at The 5 in May — what amounts to “a form of welfare for Wall Street.”

Altman concludes, stating the obvious: “When there is an increase in insolvency risk, what you do not need is more debt. You need less debt.” Well, yeah. The same applies for everyday American consumers, but apparently not many have heeded the good professor’s advice…

Americans “have piled on debt since the financial crisis,” Nomi says, and “it’s more expensive for citizens.” Indeed, average credit card interest rates have increased 12% since 2017.

Nomi continues: “Total revolving credit card debt (debt people don’t pay off right away) now stands at a record $1.04 trillion. That’s higher than its 2008 peak.” And credit card debt represents a small fraction of the average American household’s debt burden that now stands at $135,768 when factoring in a mortgage, auto loans and those pesky higher-ed loans.

“Student loan debt has tripled since the financial crisis to $1.46 trillion in the last quarter of 2018,” Nomi says. “It is the second-highest form of consumer debt in America.”

But here’s the sorta good news…

“Since the financial crisis, incomes have grown,” Nomi says. “U.S. median income has grown by 22%. The cost of living has increased by only 17%.”

That’s because “certain expenses have increased more quickly than incomes.” Namely: “Medical costs have risen by 33%. Then there’s eating out. That cost has risen by 27% since 2008.” (And expect the cost of dining out to increase more post-corona, right?)

According to Nomi, the first step is simply being honest with yourself when it comes to your debt burden. Most Americans, however, prefer to stuff thoughts on personal debt… way… down… deep.

(Nomi cites an eye-opening CreditCards.com survey of 1,000 adults that found more Americans would prefer to discuss religion and health than fess up about credit card debt.)

“Paying [credit card] balances off each month is the best thing to do. But if you can’t afford that, always get the cards with the lowest interest rates,” Nomi says. “If you have a good credit rating, shoot for 0% cards — but read the fine print and make sure you don’t pile on more debt.

“Another way to save money on your credit card debt is to consolidate it into a personal loan,” she continues, “which often offers a lower interest rate. You can deploy the interest rate savings to reduce your other debt or start an emergency fund that pays interest or to invest in the market.

“Similarly, this strategy can work to reduce higher-interest-rate auto loans or student loans,” Nomi concludes. “And always pay more than your minimum payment for your debt.

“A little goes a long way to improving your picture of wealth.”

[Ed. note: Drawing on her vast trading experience, Nomi has developed a way for you to skim some of Wall Street’s gains for yourself. And fast. We’re talking about a chance to double your money or better in a single day.

And that money can be put to good use: reducing your debt burden, stashing away a rainy day fund or improving your family’s overall financial well-being.

Sound improbable? Judge for yourself as Nomi walks you through her confidential trading system when you click here.]

The number of Americans filing for unemployment benefits came in at 1.30 million for the week ending July 11, barely changed from a revised 1.31 million claims the week prior… 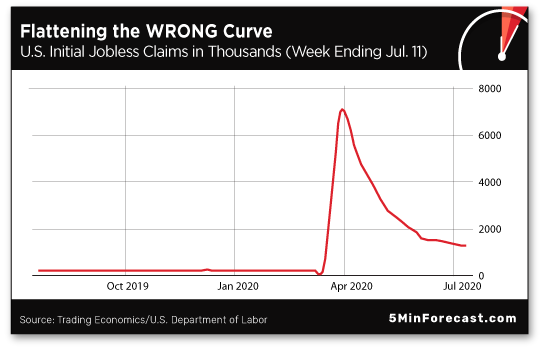 And the number of claims was above the 1.25 million analysts expected. “It was also the 17th-straight week in which initial claims totaled at least 1 million,” CNBC notes. “Initial claims have risen by more than 51 million since late March, when it peaked at 6.867 million.”

Should be interesting (is that the right word?) to see what jobless claims are next week after more states — including Florida, California and Texas — put the kibosh on reopenings.

Our CBOE trading veteran Alan Knuckman says: “Not a day goes by that I don't have to remind myself… that the stock market is NOT the economy and the extremely uneven recovery is a reality.” 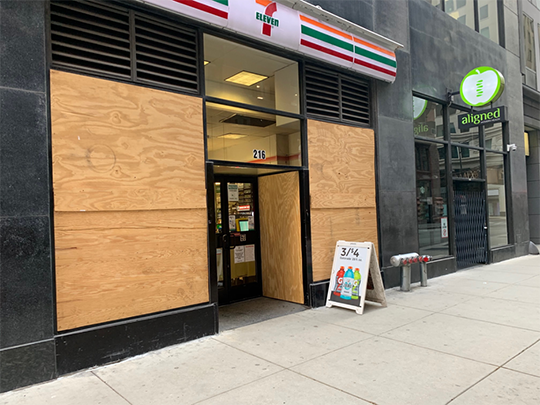 “The Chicago Board of Trade and CBOE still look deserted,” Alan says. “not… the frenzied trading pits from years past.”

In contrast: “Optimism continues to win with record highs almost every day,” Alan says. “The S&P is unchanged in 2020, shaking off the super sell-off. Now it’s set to attack the top of the 2,800–3.200 range trade.”

One Nasdaq stock — Twitter — is getting a lot of unwanted attention after hackers attacked some high-profile accounts Wednesday. The hackers’ message? An apparent cryptocurrency scam. Compromised account holders included Elon Musk, Apple and this presidential hopeful… 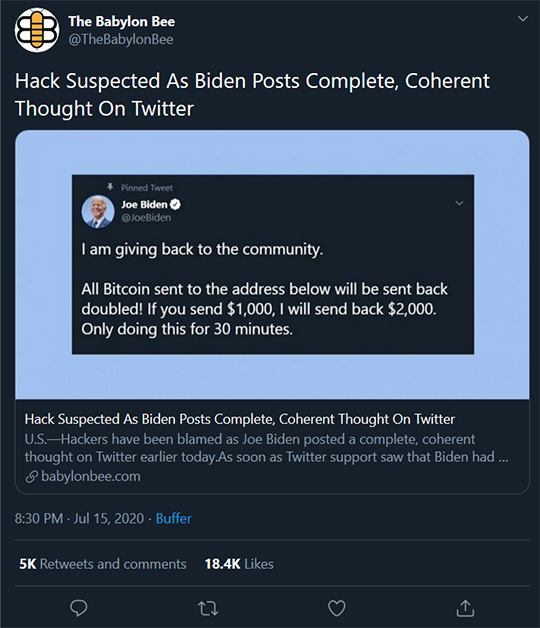 And this commentator pegs the hacker(s) as amateurs…

Of course, he’s still tweeting, so…

Checking on commodities briefly, oil’s down almost 1% to $40.81 for a barrel of West Texas crude, and gold’s still hanging out just above $1,800.

“As the world grapples with the pandemic,” says our pot stock expert Ray Blanco, “interest in cannabis as medicine to combat SARS-CoV-2 virus is skyrocketing.

“The virus tends to kill patients by causing acute respiratory distress syndrome (ARDS), caused by a runaway inflammatory response sometimes called a ‘cytokine storm.’ But in mice, THC cannabinoids were able to protect 100% of subjects from lethal ARDS symptoms after exposure to bacterial toxins,” Ray says.

From COVID-19 treatment to prevention, a group of Canadian researchers “is publishing a paper on the potential benefit of cannabinoids like CBD to protect against infection,” Ray reports.

“The SARS-CoV-2 virus is believed to infect via a cellular receptor in lung cells called ACE2. The researchers used models of oral, airway and digestive tissues to predict the effects of high CBD extracts on levels of ACE2 expression, and these were found to lower them.”

Ray continues: “The authors suggest that easy-to-use cannabis mouthwash or gargle products might be useful for preventing COVID-19 infection.”

And for investors interested in the burgeoning pot stock space, Ray says: “A small Canadian biotech… surged over 40% on news that it had discovered a cannabinoid with apparent anti-COVID-19 antiviral properties.

“This suggests potential big opportunities ahead in the cannabis health space.”

“I read The 5 on Monday, citing statistics about cities that gained population versus those that lost.

“Surely, this is purely coincidental. Our friends on the progressive left tell us that taxes have NO IMPACT on people’s behavior. Or am I missing something?”

The 5: Nothing gets past our reader, but… the same stats show folks decamping for high-tax states Connecticut and New Jersey. Go figure…

“The more things change,” a reader says, “the more they stay the same.” This in reference to the Japanese “drinking helmet” Dave mentioned Monday.

“I had to chuckle when I saw the picture of the beer helmet in The 5 Tuesday.

“It took me back to the ‘70s when ardent fans of the Baltimore Orioles stumbled around Memorial Stadium, helmet intact, with beer sloshing out the top of the cups as they drew their favorite cold adult beverage (at the time Natty Boh) through the straws.

“A corollary story? Five of my co-workers in the late ‘70s bought six season tickets to the Baltimore Colts. Why the extra seat? For the keg they wheeled into the stadium for every home game. Try that in today's NFL.

“But it does my heart good to think that time and a pandemic have not dampened the human spirit.

“Keep the news coming, both serious and not so serious.”

The 5: Thanks to our reader for the trip down memory lane — as a teenager in the early ‘90s, I was at the Orioles’ last game at Memorial Stadium.

Thanks, too, for the levity. Seems in short supply these days…

P.S. If the Federal Reserve is determined to prop up Wall Street while sticking it to Main Street, you have to “follow the money” if you want big and fast gains.

That’s why our ex-Wall Streeter Nomi Prins is helping readers seize on a market anomaly to help them make cold, hard cash.

Just by exploiting one simple market secret — which Nomi reveals at this link… But her message will be removed Monday, July 20.