The Thing About a Vaccine…

If “economic recovery” depends on the development of a vaccine for the corona-crud… well, just follow along with us here. It won’t take much of our 5 Mins. today.

There’s a blizzard of headlines this morning about vaccine development…

It’s at this point we wish to introduce three facts, each of which we’ve mentioned at one time or another over the last six months…

So… let’s say for argument’s sake that approval comes at year-end. That would be 12 months since word of a “novel coronavirus” began to emerge from China’s Hubei province.

Either the federal government will be taking unprecedented risks with the health of millions, and the result could be catastrophic

Or the federal government’s standards for approving vaccines and drugs are entirely too strict and need a total overhaul.

But neither reflects well on the federal government, does it?

[Actually, both of those things can be true. Washington’s extensive and costly regulatory regime is designed to protect well-capitalized drug firms with the resources to shoulder the costs — freezing out any upstarts. But the system still allows disasters like fen-phen and Vioxx to come to market. Worst of all worlds. Ain’t government just grand?]

After Monday’s hard sell-off, and yesterday’s modest recovery, the major U.S. stock indexes are back in the red — if not by much.

While the financial media gnash their teeth about stocks’ September swoon, “I see a sale going on right now,” says Alan Knuckman, our longtime eyes and ears in the Chicago options trading pits. “Stocks are cheaper than they were just one month ago. They’re 10% off! That’s looking like a decent deal right now.

“Plus, we have the S&P 500 retesting its June breakout above 3,200 this week. So far, we’re seeing buyers come in at these levels. That’s a bullish sign. I’d be more inclined to think we have some more downside left to go if the S&P fails to hold this level. But so far, so good.”

The big economic number of the day is the “flash PMI” — a snapshot of the economy’s performance so far in September. Numbers above 50 indicate growth, and the overall number comes in at 54.4. That said, it’s down a hair from the previous month — reinforcing the “slowing recovery” theme.

Among the big movers today is Tesla, down nearly 7.5% at last check. 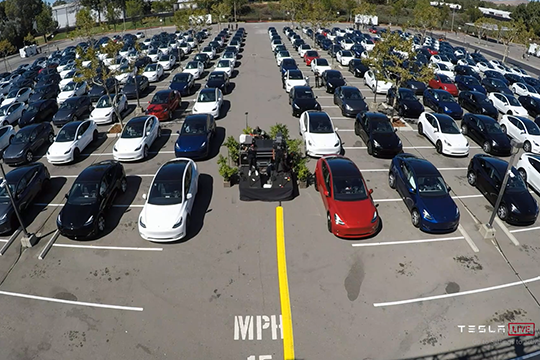 “More fantasy and incorrect statements than reality,” was one analyst’s reaction.

As for the tiny company our Ray Blanco suspects will benefit from a battery partnership with TSLA? Many of his readers were able to get in below his buy-up-to price early yesterday before shares soared higher… and he urged them not to chase the price. Good thing too, since today the price has come back to earth. That’s how it goes with microcaps; it pays to exercise patience. “Let the price come to you,” the saying goes.

For the record: Corporate America’s boycott of social media is ending with a whimper.

As you might recall, the “Stop Hate for Profit” campaign began with a bang a few weeks after the killing of George Floyd. Big name-brand advertisers like Coke and Verizon paused their advertising on social media platforms — some of them for 30 days, others until after the election. “There is no place for racism in the world and there is no place for racism on social media,” said Coke CEO James Quincey.

“Negotiated through the World Federation of Advertisers, the agreement for the first time sets common definitions of content such as hate speech and aggression, establishes harmonized reporting standards across platforms and empowers external auditors to oversee the system, which will launch in the second half of 2021.”

Exactly what that looks like, we have no idea. Nor does anyone else yet. But the promises are enough to bring advertisers back into the fold.

Wait a minute — the pandemic hasn’t been a total disaster for strapped state governments?

According to the Census Bureau, state tax collections fell 5.5% between fiscal 2019 and fiscal 2020. (In most states, the fiscal year ends June 30.)

Sales tax collections were down a mere 0.3%. And while individual income tax collections fell 10.1%, many states extended their income tax deadlines. That’s revenue they’ll book in the current fiscal year, so “actual losses are likely to be significantly lower,” writes Jared Walczak from the Tax Foundation.

As it often does, the Tax Foundation furnishes one of its excellent maps — so you can see how it all shakes out where you live… 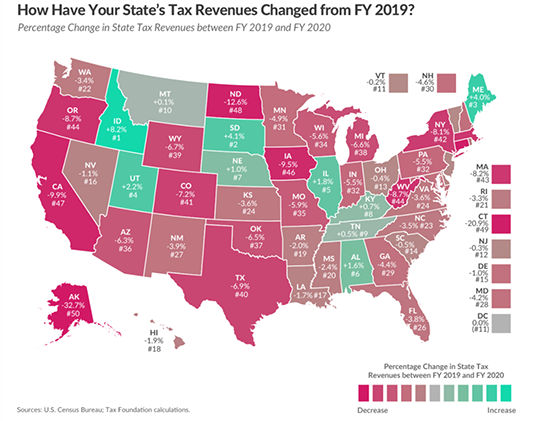 Hmmm… Not a lot of consistency there. High-tax New York and California took steeper hits than the national average, but look at Illinois — where revenues grew year over year! Low-tax Texas took a big hit, but that’s likely a result of the oil patch collapsing. Energy-dependent Alaska fared worst of all, by far.

Anyway, keep your state’s performance on this map in mind whenever the politicians start crying poor and demanding a tax increase to make up for their pandemic losses. ’Cause you know they will…

Oh, no: The decades-long explosion in the number of MBAs is only set to get worse — thanks to the pandemic.

It appears the work-from-home phenomenon is spurring legions of people to apply for online MBA programs that used to require quitting your job (if you were already in the workforce) and spending two years on a campus.

Per figures from the Poets & Quants website, applications at Columbia jumped more than 18%… while at Virginia they swelled 25% and Rice saw a staggering 63% increase. And yes, in many cases, more slots are available for those applicants — 7% more at Wharton, for instance.

We’ve long lamented the MBA-ization of America. By one estimate, American universities were cranking out fewer than 5,000 MBAs a year during the 1950s. By 2015, the number had skyrocketed to 185,200. And is American business any better run or more competitive today for all the sheepskin that’s been issued? The question answers itself.

➢ If you have an unusually good memory, you’ll recall we mentioned only three weeks ago that many corporate recruiters are cutting back on their usual MBA hiring plans, also because of the pandemic. Irresistible force, meet immovable object…

Your government in action: Before we get to the mailbag, we circle back to government mismanagement and the pandemic.

From The Washington Post: “A $1 billion fund Congress gave the Pentagon in March to build up the country’s supplies of medical equipment has instead been mostly funneled to defense contractors and used to make things such as jet engine parts, body armor and dress uniforms.”

This was money from the CARES Act, whose language stated the funds were intended to “prevent, prepare for and respond to coronavirus.” Instead, $183 million went to firms like Rolls-Royce and ArcelorMittal for shipbuilding, and $80 million went to a Kansas aircraft-parts business that was hurting from the grounding of Boeing’s 737 Max.

And $2 million went to fund “among other things, the Army’s new retro service uniform,” says Military.com. 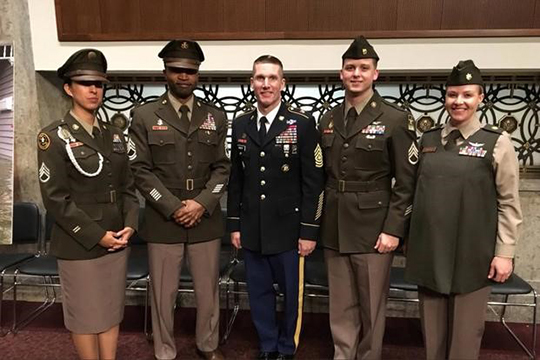 Of the 30 companies the Post identifies as having benefited from this largesse, another 10 engaged in double-dipping — collecting funds from the Paycheck Protection Program as well.

We’re told members of Congress are upset by these developments. We are not surprised. Nor will we be surprised when furor blows over, business as usual resumes and they increase the Pentagon’s budget.

To the mailbag: “Dave, when you are not selling something that expires, will be removed or explodes into the cosmos in three, five, seven days/hours/minutes… The 5 is very informative and interesting.

“Last Friday’s commentary on TikTok, Trump and the fate of our floundering nation was right on.”

As nutty as the TikTok thing is — and of course, it got a stay of execution Sunday while the “negotiations” drag on — we’re struck even more by the absurdity of the attempted WeChat ban. It would cut off almost all person-to-person communication between the United States and China. And it would alienate tens of millions of everyday Chinese who are currently indifferent to Washington, D.C.

On the subject of millennials mooching off their parents, a reader weighs in…

“In New Zealand if you supply a rental house to a family member at a reduced rent, and the Inland Revenue Dept. catches up with you, they will tax you for the taxes they are missing out on. Just saying…”

The 5: For God’s sake, don’t give the bad guys any ideas!

P.S. Speaking of opportunities that will “explode into the cosmos” only hours from now… here’s something worth checking out before the market opens tomorrow.