Joe Biden says he wants to “equalize” the benefits of a 401(k). But what’s that to you?

We return — after a day’s interruption due to the press of events — to our predictions for 2021.

It wasn’t long after Election Day that we touched on the very fuzzy Biden tax plan… and the more concrete blueprint to overhaul Social Security.

Now… with Democrats soon to control the White House, House and Senate… we turn our attention to the prospects for your 401(k).

The short version is that Biden wants to apply a wicked-complex formula that will limit the 401(k)’s advantages once you get into the highest tax brackets.

To remedy that perceived imbalance, the current deduction for 401(k) contributions would be turned into a tax credit of 26%.

Yeah, we know. Clear as mud. And even that thumbnail sketch is oversimplifying, but let’s not get too deep in the weeds. Let’s just break it down like so.

So far, so good. Everyone’s better off, and the lower earner substantially so. But hold on…

The numbers only get worse as you climb into the 35% and 37% tax brackets… and let’s not forget Biden wants to raise the top rate to 39.6% on incomes over $400,000. (His campaign website was never clear on whether that was single or joint returns.)

To be clear, these are all ballpark numbers. There are any number of permutations at work that would turn our 5 Mins. into an hours-long discourse. (For instance: Under the current system, 401(k) contributions lower your taxable income dollar for dollar. So under the Biden plan, everyone’s taxable income ends up rising.)

But one thing is clear: The Biden plan will push higher earners into Roth-type retirement vehicles.

If the tax advantages of a 401(k) become less desirable, there’s always a Roth: Your contributions are taxed upfront, but your withdrawals — including all the gains on your contributions — are tax-free. Many employers now offer a Roth option for their 401(k) plans.

Republicans could squawk about this proposal, but they won’t have a leg to stand on.

We documented it at the time four years ago: As the White House and Congress were thrashing out the Trump tax bill, the GOP was talking about “Rothifying” the 401(k) — either eliminating the pre-tax benefits or slashing the annual contribution limit to only $2,400.

The elephant party can hardly object under the circumstances.

Of course, we’ve long warned that the rules for Roths could be changed, too.

Nothing about that on the Biden campaign website, but Roths constitute a pile of money that sooner or later Uncle Sam can’t resist.

No, the feds can’t tax your original Roth contributions (or conversions), because you’ve already paid tax on those. But they could tax the gains in your account.

Or — less extreme — they could make Roths subject to required minimum distributions like conventional 401(k)s and IRAs. That could push you into a higher tax bracket in your golden years.

Or at the very least, they could end the “backdoor” Roth by which higher earners can skirt the income limits on Roth IRA contributions.

Anyway, it’s early days. Once there’s a concrete proposal — and count on it, there will be — we’ll parse the fine print for what it means to you.

To the markets… where bad news is good news. Just like in Obama times!

Coming out of the “Great Recession,” it seemed every lousy economic number — like the monthly jobs report — perversely drove the stock market higher. Traders figured poor data would spur the Federal Reserve to mainline even more EZ money toward Wall Street. (Which it did.)

What’s past is prologue: The monthly jobs report is out and it stunk up the joint.

Expectations were low to begin with: Among dozens of economists polled by Econoday, the consensus guess was for a meager gain of 50,000 jobs. The actual number: A loss of 140,000. None of the economists saw that coming.

With that, a seven-month streak of gains is over. And on the big chart from Calculated Risk, the red line is rolling over… 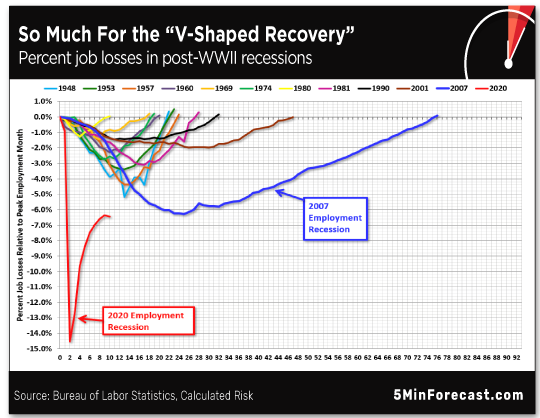 Disappointment notwithstanding, the S&P 500 and the Nasdaq are adding to yesterday’s record closes.

But for a second time this week, easy-money expectations are not helping gold. Not at all.

Two days ago, the Democrats’ takeover of the Senate raised hopes for “moar stimulus” but gold tumbled $45. Today, the job numbers did likewise… and gold’s down another $55.

Can’t chalk it up to dollar weakness; the dollar index is only slightly in the green at 89.88.

Could it be that Bitcoin is looking more attractive in the quest for nondollar assets? We started hearing rumblings to that effect last year… and they’re looking more credible after this week. Gold has taken a spill of $100 in two days… while Bitcoin has soared from one record height to the next — $35,000 Wednesday, $41,500 today.

That’s not to say gold is toast. Hardly. But gold and Bitcoin might take turns for a while…

For the record: Boeing is now just like the big banks, paying “cost of doing business” fines to make criminal charges go away.

Yesterday, Boeing agreed to a $2.5 billion settlement for the 737 Max fiasco — just over 2% of its market cap at current share prices. The company also formally fessed up that its employees deceived regulators about the safety issues that led to two crashes, killing 346 people.

But no one will be hauled away in leg irons to Club Fed.

We saw this coming more than a year ago. Boeing, we said, is “too big to jail.” Or as a law prof told The Wall Street Journal at the time, “The government can’t lose a company like Boeing as a defense contractor.”

Just like the feds feared that holding the banks accountable for their misdeeds would crash the economy. Oy… 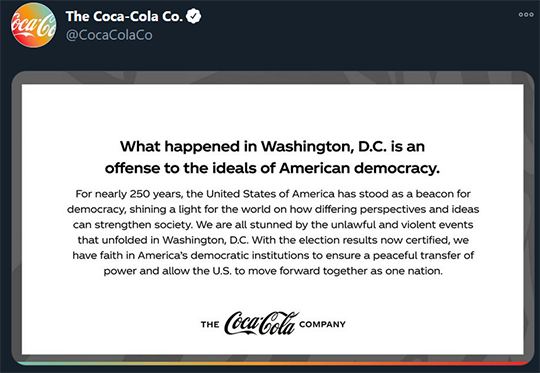 Coke is just one example. Seems like nearly every Fortune 500 company has put out a similar statement carefully crafted by lawyers and PR pros.

We didn’t realize there was so much public interest in Coke’s opinions about American democracy. Reminds us a little of the social-media ad boycott and pro forma denunciations of racism many companies did over the summer.

It does seem even the less-PC outposts of big business are finally turning their back on Donald Trump in his final days. Even before the mob was cleared from the Capitol Wednesday afternoon, the National Association of Manufacturers called on Vice President Pence to invoke the 25th Amendment and attempt to remove Trump “to preserve democracy.”

“Besides the poor souls who lost their lives (by whose hands I still don’t know for sure) can someone tell me what the big ‘insurrection’ really did and who it truly hurt? I mean all I can see ‘happened’ was Congress had to stay late and some protesters got some interesting pictures inside the Capitol Building.

“There are no reports of mass destruction and only recently have I heard of apparent “pipe bombs” that may or may not be related. Sure seems a lot easier to clean up after compared with an antifa/BLM protest.

“I think there is probably more to the election fraud than not. But since no one really wants to do their job and properly investigate the allegations we are left to suspect the worst or just ignore it because ‘your guy won.’

“The best idea would have been to thoroughly comb through the accusations and either find the issues, report them, make arrests if called for and transparently change the election result OR make the ‘fraud accusers’ look very silly for suggesting it happened.

“If the U.S. citizen can’t trust the election process, there is no reason to trust anything else the government has to say or do (not that I really do that anyway).

“That’s my two cents worth.”

The 5: In another time, perhaps, one of those “bipartisan blue-ribbon panels” could have done a snap investigation and reached a conclusion most everyone could agree on. But the mistrust and contempt is too deep-seated now.

As Brendan O’Neill writes at Spiked, “Hillary Clinton supporters, too, spread conspiracy theories about Russia stealing the 2016 presidential election and cheered on the security state as it investigated Trump’s election. Did they think this behavior would not have a long-term impact on respect for democracy? That it wouldn’t encourage cynicism toward America’s electoral process?

“Democrat conspiracy theorists… should look a little more closely at the hotheads who stormed the Capitol — they might see a more clownish, fancy-dress version of their own anti-democratic selves staring back.”

O’Neill also addresses the contrast between this week and last summer: “It is not whataboutery to draw attention to the elites’ meek response to earlier riotous behavior. Rather, it is about understanding the growing dominion enjoyed by the new clerisy over the political narrative and even over language and words themselves.

“Their cultural and media supremacy means they increasingly have the power to narrate BLM rioting as not being rioting at all, while a violent incursion in the Capitol is literal fascism; it means they can say that anti-lockdown protests during a lockdown are lethal to public health, but anti-police protests are not; it means they can secure the silencing and even sacking of anyone who referred to the BLM violence as looting and who called for the National Guard to intervene, while cheering as police at the Capitol shoot protesters.

“It is this control of political narration, of thought itself, of the very meaning of words like riot, looting, fascism, peaceful and so on, that must be highlighted and confronted.”

And this from a guy who says, “Joe Biden won the election, fair and square. The Trumpite campaign to rubbish the election result is wrong and dangerous.”

“Thanks for your open dialog,” another reader writes.

“I always enjoy what you guys have to say and appreciate ‘your angle.’”

One more: “I always enjoy reading your 5 Min. Forecast. I rarely agree with any of your political comments but always appreciate different perspectives from my own. Keeps the mind healthy.”

The 5: Thank you. Country could use a lot more healthy minds around now.

P.S. One more loose end to tie up from yesterday, courtesy of a reader: “In Spanish, ‘schadenfreude’ translates to ‘alegría maliciosa.’”

Who knew, right? We really do have the most informed and engaged readership of any financial e-letter out there…