And so the moment has come.

Liberal predictions that Donald Trump would have to be hauled out of the White House by force? Didn’t happen.

Conservative hopes that the kraken would be released, pedophiles arrested en masse and Trump serve a second term after all? Yeah, that didn’t happen either.

In other words, policies coming out of Washington, D.C., inevitably impact different industries and sectors for good and for ill.

But if you let red team-blue team tribal loyalties enter the equation, well, it can be hazardous to your wealth.

Twelve years ago as Barack Obama entered office, many investors were tempted to abandon the stock market for good.

And with Obama pursuing a tax-and-regulate agenda at the start of 2009? It could only be downhill from there, right?

Wrong. The S&P bottomed at 666 in early March. (Obama called it almost to the day — which was no coincidence.) Four years later, a couple of months into Obama’s second term, it finally exceeded its 2007 peak of 1,565. By the end of his eight years, the number was 2,263.

We also recall the early months of the Trump presidency — when the shoe was on the other foot.

In April 2017, our Greg Guenthner ventured to a conference in New York.

“According to many of the professionals I chatted with,” he recalled, “the anti-Trump crowd is yanking their money out of the market at a frantic pace. Money managers attempting to play potential policy changes are getting more than an earful from their clients.”

Today, it would be foolhardy on our part to venture where the S&P might sit in another four or eight years…

But it is an ideal time to identify winning and losing sectors going forward. For instance… “the biggest social media stocks are already facing the prospect of heavier regulation,” our Zach Scheidt points out.

True, political donations from those companies lean heavily Democrat — and the new regulations might well be written in a way to strengthen the giant companies and strangle any upstart competition. Look at what’s already happened to Parler.

Then again, the devil’s always in the details. “Given that these stocks have already surged higher in the last year, there’s now a risk that investors will take profits off the table and sit this season out while we wait to see how new regulations are enacted.”

“I’m also concerned about how new regulations could add more pressure to the oil and gas industry,” Zach goes on.

“If the Biden administration reinstates bans on fracking, drilling on federal lands or other fossil fuel regulations, it could pose significant challenges to the U.S. oil and gas industry.

“I would be cautious with traditional energy positions for now. There are simply more reliable places to make money in the markets.”

To that end, “It’s no secret that Biden and the Democrats are big fans of alternative renewable energy,” Zach says.

“And thanks to huge advances in technology over the past decade, power sources like wind, thermal and especially solar are becoming much more viable.

“In the solar space, there are quite a few small and midsized companies that will benefit from direct subsidies as well as curbs on allowable emissions from more traditional energy sources.

This should benefit companies like First Solar Inc. (FSLR), SunPower Corp. (SPWR) and an assortment of smaller companies that each have unique intellectual property advantages.”

Also, look for bipartisan agreement on public works projects — or to use the trendy 21st-century term, “infrastructure.”

“Not only will these projects help to improve our roads, bridges and public utilities,” says Zach, “but they’ll also help usher in new high-tech opportunities like municipal Wi-Fi, 5G connectivity and more.”

It may sound boring to invest in “old school” plays like Vulcan Materials Co. (VMC) or Caterpillar Inc. (CAT), but these companies should experience significant growth this year.

“Instead, let’s keep an objective view on and put our capital in the best places to protect and grow our wealth.”

As the day wears on, the major U.S. stock indexes are all in record territory.

Tech stocks in general are getting a lift from Netflix’s quarterly numbers. After delivering a “miss” on subscriber growth three months ago, NFLX now has 200 million subscribers worldwide. As we write, Netflix shares are up 14% on the day.

For the record: There’s been a Jack Ma sighting.

In the course of assessing China’s economic prospects during 2021 last week, we mentioned China’s richest man hadn’t been seen in public since October. 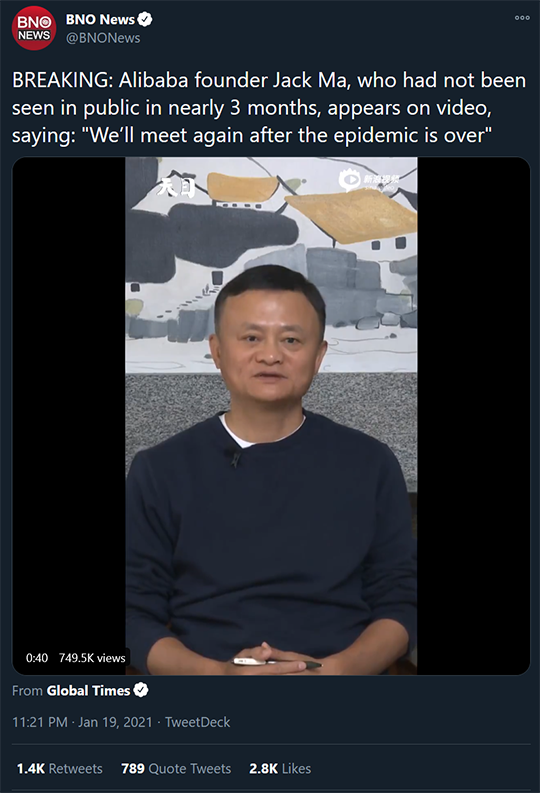 He spoke on video to a philanthropy event hosted by his foundation. More than one wag on social media took note of the, well, hostage-y quality of Mr. Ma’s appearance. But it was good enough to send the Hong Kong-traded shares of his flagship company Alibaba up 8.5% today.

Speaking of China, events so far this week affirm our position that the new administration will continue to wage the New Cold War against China.

In another hearing room, senators heard from Secretary of State-designate Antony Blinken: “I also believe that President Trump was right in taking a tougher approach to China. I disagree very much with the way that he went about it in a number of areas, but the basic principle was the right one, and I think that’s actually helpful to our foreign policy.”

Meanwhile, Politico reports Biden will name Ely Ratner as a special adviser to the Pentagon on China. Ratner works for a think tank that gets beaucoup contributions from defense companies, and he wrote an Op-Ed last fall titled “Trump Has Been Weak on China, and Americans Have Paid the Price.”

We hate what this means for Jefferson’s ideal — expressed in his 1801 inaugural — of “peace, commerce and honest friendship with all nations.” But lest we let politics get in the way of investing, we note that since our most recent write-up on the New Cold War three weeks ago, the SPDR S&P Aerospace & Defense ETF has jumped from $110 to $120.

“You mentioned U.S. investors having to unwind their Chinese stocks by November,” a reader writes, following up from a topic last week. “Specifically, is JD.com Inc. one of them? And is there a list of other stocks that I can access?”

The 5: JD was excluded by name from the list a few days ago. So was Jack Ma’s Alibaba, as well as Tencent.

The blacklist has changed frequently since Trump issued his executive order in November and will likely change again with a new administration. But here’s a PDF of the most recent version from the Treasury Department, dated Jan. 8. Good luck.

“Nice discussion of Gary Gensler,” a reader writes after our Saturday edition took on Biden’s pick for SEC chairman and his stance on cryptocurrencies.

“While Gensler at SEC may be friendly to crypto, Yellen at Treasury hates crypto, as a waste of energy. Yellen will be over the Office of the Comptroller of the Currency, so may be a force for trouble.”

The 5: Yeah, we noticed Yellen did some crypto-bashing during her confirmation hearings yesterday. Terrorism, money laundering, all the usual tropes. We’ll stay on top of it.

“Dave, interesting point you guys make about politics becoming ‘the vehicle through which millions of Americans have come to find meaning in their lives.’

“And Taibbi noting the ‘potential respites in the form of family, community and alternative perspectives are demonized as people sink deeper into cultlike bubbles.’

“Isn’t that what sports used to do for us? Trump turned politics into a pro-wrestling match – with rabid-like ‘fans’ on each side. And the COVID lockdowns shut down a lot of sports outlets for millions of Americans, not to mention being unable to see family and friends in person.

The reader reminds us of a speech Osama bin Laden delivered shortly before the 2004 U.S. elections: “We, alongside the mujahedeen, bled Russia for 10 years until it went bankrupt and was forced to withdraw [from Afghanistan] in defeat… So we are continuing this policy in bleeding America to the point of bankruptcy.”

We’re well familiar with this history: Hours after U.S. special forces killed bin Laden in May 2011, we said bin Laden pulled off the most brilliant leveraged bet in history.

Per Brown University’s Costs of War Project, the total cost of the First War on Terror has now reached $6.4 trillion. That $6.4 trillion is about 29% of the national debt Uncle Sam has racked up since 2001.

Helluva return. And it keeps compounding…

P.S. We’re compelled to note that Donald Trump slunk out of Washington without pardoning Julian Assange — whose prosecution we denounced in no uncertain terms more than two years ago.

Per CNN, Trump “did not want to anger Senate Republicans who will soon determine whether he’s convicted during his Senate trial.” Real profile in courage there.

And as the new administration prepares to launch the Second War on Terror, the domestic version, we have little hope a Biden Justice Department will drop the case. And the beat goes on…