On Friday, the global power elite are set to declare a crisis of confidence in the U.S. dollar.

Not that they’ll put it in those terms. But make no mistake — that’s what will happen.

Friday is when finance ministers and central bankers from the G20 nations will meet online and sign off on a record issuance of “special drawing rights” by the International Monetary Fund.

From the Reuters newswire: “Officials from the United States, the IMF’s biggest shareholder, have signalled they are open to a new issuance of $500 billion, sources said.”

Such a move couldn’t happen without U.S. backing. But as Bloomberg reports, “Treasury Secretary Janet Yellen could make a decision as soon as the end of February, when finance ministers and central bankers from the Group of 20 meet, the people said on the condition of anonymity. That event, hosted by Italy, will be held virtually on Feb. 26.”

This is an event our macroeconomics maven Jim Rickards has been anticipating for a decade — starting in his first book, Currency Wars.

What’s coming on Friday is nothing less than a crucial step toward the establishment of a spooky new currency — for the entire globe.

But no longer would the dollar be the world’s “reserve currency” — the go-to currency for cross-border transactions. That would fall to the aforementioned special drawing rights, or SDRs.

The idea is to wreck your purchasing power — but to make the mechanism so complicated that no one would understand why the prices of gas and groceries are shooting sky-high.

First, a quick reminder of what the SDR is: It is a kind of supermoney printed by the IMF and circulated among central banks and governments.

The IMF has issued SDRs three times over the last 50-odd years — always in conjunction with a crisis of confidence in the U.S. dollar…

The new issuance, at $500 billion, translates to roughly 350 billion SDRs.

But why a fourth round now? And why so much bigger than the last one? What is it that’s shaking the elites’ confidence in the dollar now?

For the moment, they’re not saying.

Reading the corporate media, the official explanation has nothing to do with the dollar. Rather, it’s to help developing countries recover from the pandemic.

But one of Reuters’ sources says only $74 billion of that $500 billion total would go to “low-income countries” and “emerging markets.”

And so we’re left to guess.

Perhaps — and we’re only speculating — the pandemic-fueled explosion in the Federal Reserve’s balance sheet has brought the system to a breaking point. 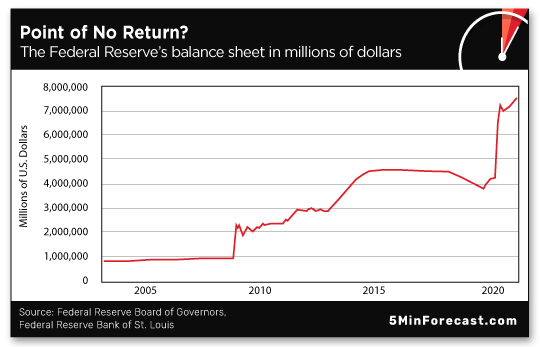 From $4.2 trillion a year ago to $7.6 trillion now — is that enough to set off a panic in the hallowed halls of the globe’s major financial institutions, permanently undermining confidence in the dollar?

Your editor brought up that very scenario during a “town hall” with a regional Fed president four years ago. (Not surprisingly, he waved it off.)

But whatever the source of the panic, we know this: “The next panic will be bigger than the central banks’ ability to put out the fire,” as Jim explained here in 2015. “The only source of bailout cash will be the SDR.”

Result? “The SDR has the power to reduce the dollar to the status of a local currency no different than the Mexican peso.”

Again, you and I will still use dollars. But they’ll no longer be the world’s go-to currency. That will be the SDR’s function in the aftermath of the present crisis — whatever it is.

“The SDR can be issued in abundance to IMF members and can also be used in the future for a select list of the most important transactions in the world, including balance-of-payments settlements, oil pricing and the financial accounts of the world’s largest corporations,” Jim explained in his 2014 book The Death of Money.

The genius of the scheme is that SDRs would create inflation… but everyday folks would have no idea SDRs were the cause.

“Any inflation caused by massive SDR issuance would not be immediately apparent to citizens,” Jim wrote. “The inflation would show up eventually in dollars, yen and euros at the gas pump or the grocery, but national central banks could deny responsibility with ease and point a finger at the IMF.”

But a de facto devaluation of the dollar isn’t the endgame. No, that’s much worse. More about that tomorrow. In the meantime, Jim says “it’s one more reason to own gold and silver.”

We won’t bang the drum too loudly today for Hard Assets Alliance, lest we become tiresome. But you know it’s our favorite way to accumulate a precious metals stash — so much so that our firm bought a stake in the Alliance, and you can expect we’ll benefit when new customers fund their account.

For now, the business press is clinging to the narrative that traders are spooked by rising interest rates. And it’s true that at 1.35%, the yield on the benchmark 10-year Treasury note has recovered to what looked like record lows in 2012 and 2016 — before the pandemic triggered a flight to safety last year, pushing the yield as low as 0.5%. 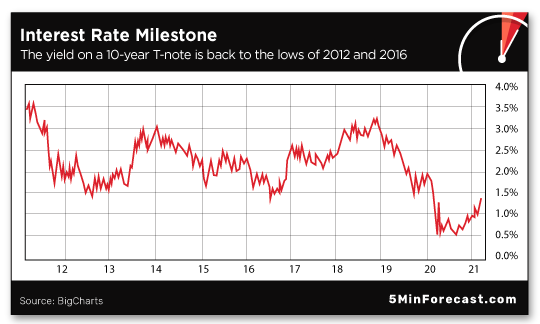 But as we said last week, rising interest rates rarely choke off a stock-market rally during the early stages of recovery from a recession. So what gives?

“This makes sense. I think we’re seeing the market abruptly adjust to the fact that the pandemic is on its last legs. I’m not saying coronavirus is gone for good — but the numbers are clearly improving and the market is quickly waking up to this reality. Many tech names were direct beneficiaries of the pandemic environment, so it’s perfectly reasonable for investors to rotate out of some of these plays and into travel stocks, entertainment names, etc.”

Then again, “it’s possible the action we’re seeing leads to a broader sell-off. We just need to be mindful that this is a possibility going forward.” 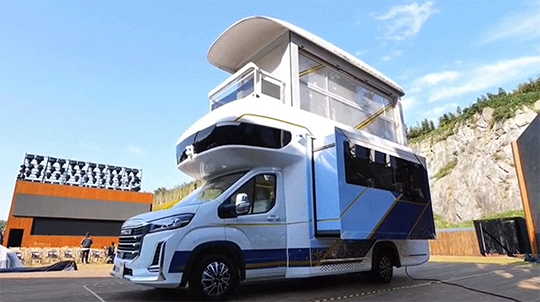 Designed by China’s SAIC Motor, the standout feature of the Maxus Life Home V90 Villa Edition is a sunroom “that automatically extends from the roof giving the RV an entire second floor of living space, including a walk-out balcony,” writes Andrew Liszewski at Gizmodo.

“Right,” you’re saying. “How do you get up there? A ladder? Stairs would take up precious space.” 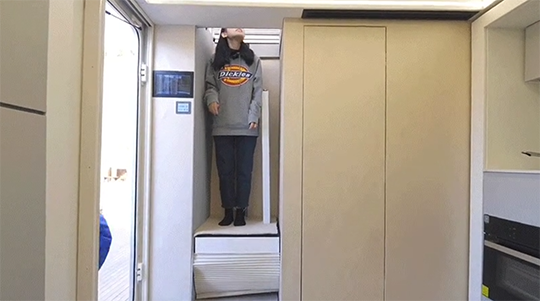 Cost? $413,000. Before shipping from China and modifications to make it street legal in the United States.

“Having lived through the Texas freeze, I probably would not give that Associated Press story too much cred,” a reader writes as the back-and-forth on the power cuts continues.

“The biggest factor was an unprecedented winter storm (well, at least since 1899) covering almost the entire state in terms of temperatures and duration. Texas essentially has its own separate ‘grid.’ ERCOT oversees that ‘grid.’ It does not produce power. Texas has, in fact, embraced wind power for base-load purposes, and over 21% of that load is attributable to wind on an annual basis. Coastal folks and Beltway types need to drive through the Panhandle and West Texas especially to see the scale.

“As we all know, energy, climate and the concept of ‘Texas’ as an entity are highly politicized; ergo, we need to look at the actual reality and not politically influenced accounts. Because of the extreme cold, all forms of power failed to some extent — wind, conventional and nuclear: wind turbines did freeze, instrumentation and other problems at conventional and nukes did occur.

“Except for the Panhandle, Texas does not experience much in terms of extreme cold — heat is another story. Accordingly, wind turbines and other plants are designed and installed differently than in Norway or New York. Hundred-year events are not part of the equation.

“The takeaway for people who are interested — truly interested in the welfare of citizens and not their utility (no pun intended) as political pawns — is that we need a balanced mix of energy production for the foreseeable future; alternative energy will at some point become a reliable, affordable and much larger segment of that mix, but common sense and the common welfare must be considered in the timetable for that.

“Most Texans are leery, to say the least, of some jackleg politician living somewhere else who doesn’t know an armadillo from a pumpjack making foolish decisions divorced from reality that we — and not them — have to live with every day.

The 5: What, you won’t take a side in the “It’s the windmills!” versus “It’s deregulation!” circus? How dare you be so subtle and nuanced!

“I’ve long been a proponent of nuclear power for the reasons stated in yesterday’s 5,” a reader writes.

“Years ago my response to risk of storage of nuclear waste rather than in landfill or previous dumping in the deep sea (as warned of by Godzilla films) was to either launch it into space or, more easily, toward the sun, until gravity pulled it in.

“The nuclear waste sent would be infinitesimal compared with the radiation given off by the sun. Given the gravitational pull of the sun it would also require less fuel to launch until it reaches terminal orbit.

“Now that SpaceX is regularly launching this could be another revenue source for the company. Just a thought. I’m not a nuclear physicist but logically this would seem a viable solution once the cost of launching drops, which is currently the trend.”

Staying with nuclear, a reader inquires: “I was wondering if anyone at The 5 has ever watched the Bill Gates documentary called Inside Bill’s Brain. It is very well done, in my opinion, and in one episode (Part 3, I believe), nuclear power is discussed.

“The Bill & Melinda Gates Foundation has assisted funding on new safer designs for nuclear power plants and what is in development is nothing short of amazing, in my opinion. The new designs would also consume all of the ‘waste’ stored at current nuclear facilities as fuel to power the new plant designs.

“I would encourage you to watch this and perhaps mention it to all readers of The 5. I was incredibly impressed and it seems to make perfect sense, will rid the U.S. of the all previous nuclear waste and create very little, if any, new waste.

“Thanks for the great daily dialogue and keep up the great work.”