Our founding editor Addison Wiggin sat down (virtually, of course) with journalist David Goldman, who’s contributed to Asia Times,TheWall Street Journal, Forbes, The American Interest and more. And while this is just a small sample of Addison’s interview with him at the Wiggin Sessions, we plan to release more content to a wider audience in the months ahead.

But for now, Addison and Mr. Goldman discuss his most recent book: You Will Be Assimilated: China’s Plan to Sino-Form the World — an ominous title (which contains a Star Trek reference, by the way). 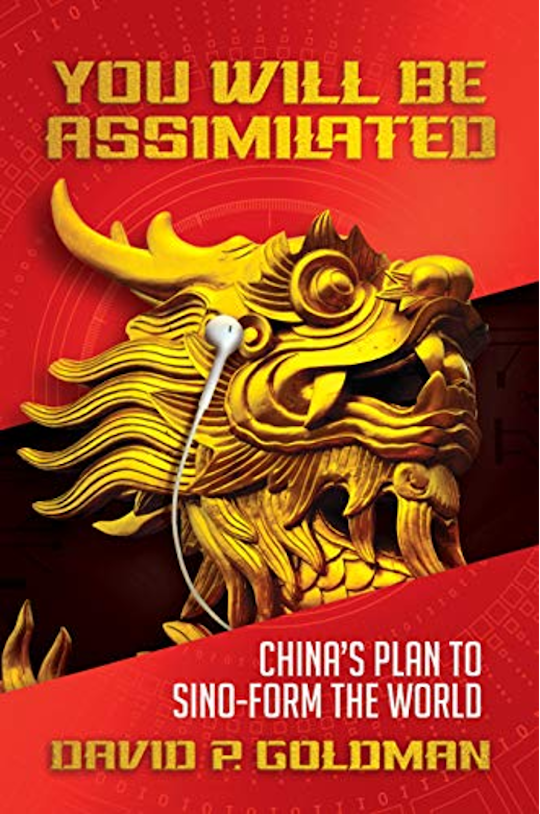 “So for example,” Goldman continues, “China already has ports that are completely automated, where 5G sensors communicate with each other and you have automated cranes, automated trucks, automated warehouses, where a ship comes in, a crane picks it up, puts it in a truck, takes it to a warehouse, the goods are sorted.

“There’s a little barcode or even a computer chip on every product. Machines route that to their ultimate destination,” he says. “And there’s almost no human intervention. Just a couple of guys in lab coats sitting in an air-conditioned bubble monitoring the whole thing.

And here’s how the second-largest economy brings the U.S. to its knees…

“Because [China] has such an advantage in manufacturing and logistics” — including 70% of the world’s installed 5G Wi-Fi — “it’s able to force the rest of the world to take its [yuan] as payment instead of the dollar,” Goldman says. Yep, we’re talking de-dollarization — something The 5’s followed doggedly for many years now…

“As the dollar begins to disappear as the main currency in world trade,” says Goldman, “China gains the advantage of having a reserve currency. It gets cheap credit from the rest of the world.”

And when the USD relinquishes reserve currency status, “our interest rates go up, our manufacturing declines… and our economic and military power shrink because, ultimately, industrial power and military power are the same thing,” he says.

“So the United States is a second-rate power,” Goldman forecasts. “Our social fabric is torn apart… We have a prolonged period of, if not social chaos, at least political paralysis and the Chinese, meanwhile, integrate large parts of the rest of the world into their economic system. They assimilate other people.”

But Goldman remains stubbornly optimistic: “I don’t think anything is inevitable. I think it’s in our hands…

“In 1973, a lot of prominent people, including Henry Kissinger, were sure Russia had won the Cold War,” he says. “It was all over for capitalism; Russia was going to be the dominant power.

“We had a revolution in avionics in just nine years, which shifted the balance of power away from the Russians to the Americans.

“In those nine years, America basically invented the digital age,” he adds. “We invented the semiconductor laser, which created optical networks. We invented… chip manufacturing, which is what put light and fast chips into the cockpits of F-15s.

“We invented all kinds of new displays, the internet itself,” Goldman says. “American innovation, when we really put our minds to it, has more than once stunned the world and changed all the calculations.”

Can the U.S. do it again? One thing is clear: AI innovation is key to emerging at the top of the next industrial revolution, Goldman believes.

“Once again, we’ve seen over and over… a V recovery intact in the NDX,” says our CBOE trading veteran Alan Knuckman.

The Nasdaq-100 is the index made up of 100 or so of the biggest nonfinancial companies listed on the Nasdaq. And Alan says: “If [the NDX] does what it does every time in history, my target’s 17,000, which is another 15% higher.” 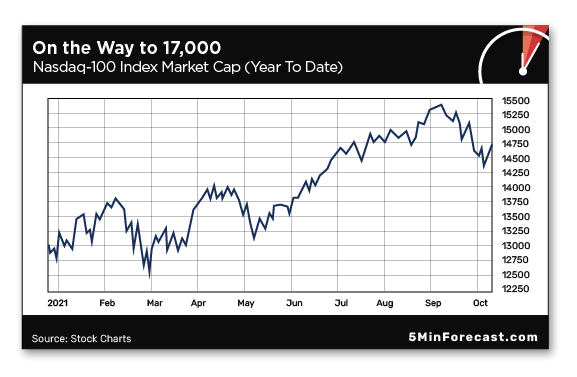 This just in: The Organization for Economic Cooperation and Development (OECD) has reached an agreement on corporate tax rates (after years of haggling). The group of 136 countries agreed to a global minimum tax rate of 15%.

“The deal marks a shift in tax policy because it not only imposes a minimum corporate tax rate, but it also forces companies to pay taxes where they operate — not just where they have their headquarters,” CNBC says.

Now on to the day’s major economic number…

The wonks at the Bureau of Labor Statistics conjured 194,000 new or revived jobs for the month of September — far fewer than the 475,000 expected by the “expert consensus” among dozens of economists polled by Econoday.

That’s two straight months the number has missed expectations. On the big chart from Calculated Risk depicting the job losses and recoveries from every recession over the last 75 years, here’s where we stand… 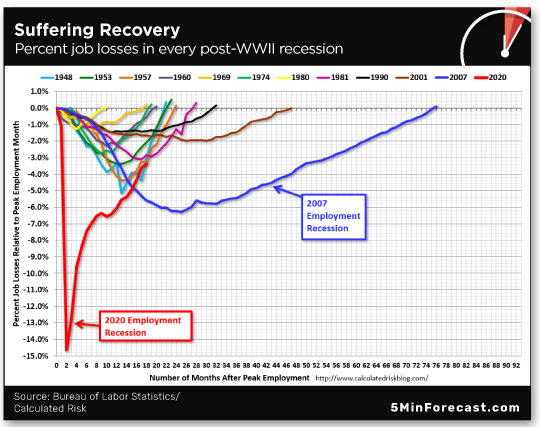 “The current employment recession was by far the worst recession since WWII in percentage terms,” says Calculated Risk, “but currently is not as severe as the worst of the ‘Great Recession.’” So there’s that…

“There are a lot of concerns among investors today,” says our retirement specialist Zach Scheidt. Including…

“These areas of uncertainty could stick around a while,” says Zach, “but if you know where to look, there are always areas of opportunity.

“Banks have historically made money by borrowing cheap and lending to individuals at a higher rate, referred to as net interest income.

“Although there have been some bumps along the way, the economy is still reopening and businesses will need to borrow to expand,” Zach notes. “This is great news for regional banks that lend to small businesses to help them grow.

“One of the regional banks I like right now is Fifth Third Bancorp (FITB), primarily a Midwest bank spreading into the Southeast.

“The second area I want to highlight is energy, more specifically oil and gas producers,” says Zach.“Oil prices are high thanks in part to the rising demand for gas. And since there haven’t been investments in new oil fields, there’s now a supply problem too, which drives prices even further.

“Halliburton Co. (HAL)… serves oil and gas by providing parts, expertise and services for oil and gas producers,” he continues. “The company is growing profits, trading at just 15X earnings with an 0.8% yield. And I think this dividend could go higher in the near future.

“There are always some areas of the market trading higher,” Zach concludes. “And if you’re diversified, you should always have some winners to help offset market weakness.”

[Zach will disclose two more stock picks when he gathers on Thursday, Oct. 14, at 1:00 p.m. EDT with five other leading editors — each experts in technology, retirement planning, crypto and more. Register for the summit today.]

The 5’s been covering the beer-label beat for years now… Today we pick up on Maryland-based Flying Dog Brewery, which calls itself a “First Amendment brewery” because the company’s been going to court in states across the country since 1995, defending the company’s tagline “Good Beer, No Shit” and more.

Michigan functionaries said the labels were “detrimental to the health, safety and welfare of the general public” and if Oprah (yes, Oprah) wouldn’t use the word bitch on her show, then Michiganders should be protected. (Heh. What Would Oprah Do?)

“You’d think the bureaucrats would have known… the federal government already approved [Flying Dog] beers,” Stossel says. Remember? The feds at the Alcohol and Tobacco Tax and Trade Bureau (TTB) rubber-stamp beer labels. “Which makes me wonder: Why does every state need separate regulation?

“I suspect the answer is: Bureaucrats want jobs, and politicians are eager to waste our money,” Stossel summarizes. We’ll raise a pint to that!

For more on First Amendment rights, a reader double-dog dares us…

“On the topic of overreach and tyranny, both federal and state,” he says, “The 5 is strangely quiet on Grandpa Joe’s mandated vaccines. I daresay it is a Rubicon of sorts that the government is preparing to cross.

“This mandate would essentially turn private-sector employers into government tools giving the ‘all clear’ for federal government policy to physically invade a private citizen’s (employee’s) body.

“Joe Biden’s mandate essentially demands that business owners/operators must force their employees to be Big Pharma’s laboratory rats. Where the hell is Congress during all of this? Why isn’t anyone fighting back?”

He continues: “Why is The 5 avoiding this issue? Are you afraid of getting censored for ‘anti-vaccine propaganda’? (Yes, that is the old ‘I dare you to publish this’…)

“There is a money angle in here somewhere that places the issue in The 5’s scope … namely go long on Big Pharma? I am sure Fauci is long Big Pharma. Hey, our Fed governors play that game. Why not Fauci and Grandpa Joe’s dynasty?”

On the contrary, we’ve not avoided the issue of vaccine mandates. At all. Fewer than four weeks ago, Dave devoted a single issue to the subject — aptly titled “Permanent State of Emergency.”

Before that? We addressed the issue of “Vaccine Passports.”

And since we’re on a roll, yes, we are seriously uneasy about censorship, something Dave covered in detail in 2018, and updated for 2021.

As for Fauci, Biden and Big Pharma… well, that’ll have to be an issue for another day.

Try to enjoy your weekend, and take care…