If you’re a “typical” reader of The 5, research says you’re not as smart as you think. Or rather, we should say, as levelheaded.

“Researchers at the Massachusetts Institute of Technology are diving into the demographics of people that panic sell stocks during a market crash,” Bloomberg reported a month ago.

They analyzed more than 600,000 brokerage accounts.

“Investors who are male, over the age of 45, married or consider themselves as having ‘excellent investment experience’ are more likely to ‘freak out’ and dump their portfolio during a downturn.”

Heh… Bloomberg is describing the “target demo” of the financial newsletter biz to a “T.”

It gets better. From the study itself: “The occupational groups with the three highest risks of panic selling are ‘self-employed,’ ‘owners’ and ‘real estate.’”

Again, right up our alley! Some years ago, your editor was among a small group at our firm who convened a strategy session. The purpose — to develop a profile of our “typical customer,” someone we could present to young writers, marketers and customer service folk so they’d have a concrete idea of who they’re talking to.

We came up with… “Bob the dentist.” Uncanny, right?

Meanwhile, the researchers write, “The three occupational groups with the least risk of panic selling are ‘paralegal,’ ‘minor’ and ‘social worker.’”

Yep. In a panic environment, a purple-haired teenager dabbling in the market for the first time — we’ll call her Madison — is more likely to keep her wits about her than Bob the dentist.

But that only makes sense when you think about it, right? Madison — don’t you dare call her Maddie — has never experienced a market crash. Unless you count the COVID-crash of last year, and the lesson everyone under 25 took away from that is that the Federal Reserve always has the stock market’s back.

You, on the other hand — if you fit our typical customer profile — have some scars by now. You know the Fed doesn’t always succeed right away when it waves its magic money wand.

Maybe you got burned badly in the 2000 dot-com crash… and it took you the better part of six or seven years to get back to breakeven. And just when you felt like you could breathe again, you got hammered by subprime and the Panic of 2008. Perhaps you didn’t really start gaining ground again until 2013 or thereabouts.

So when the market took a spill in mid-2015… and again in late 2018… you might have been tempted to sell in a panic. And it would have been exactly the wrong thing to do. 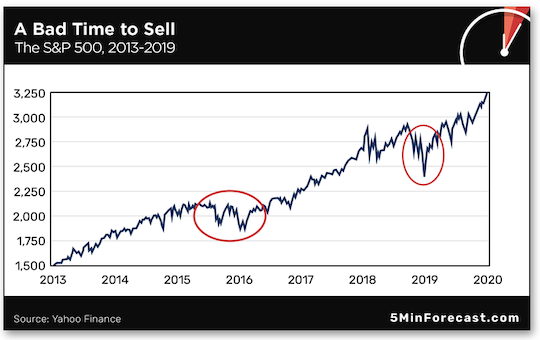 Did you have the conviction to hold on tight? Or are you feeling pangs of remorse as you look at that chart?

If it’s the latter, here’s something that might make you feel worse: How long did you wait for the market to go back up before you got back in? In other words, how much of the recovery did you miss?

There’s no shame in your answer. You — and Bob the dentist, for that matter — are only human. And we’re talking about all-too-human reactions here.

We write today not to beat you up, but to offer you hope. What if you could take a protective step with a tiny bit of your portfolio? A simple trade that would pay off big enough in the event of a market downdraft that you wouldn’t panic sell the rest of your holdings?

One more example from a little further back in history. Maybe you remember this one, too.

Stocks were in the 16th year of an epic bull market. But a wave of Asian currency collapses that began the previous year climaxed in a default by the Russian government and the collapse of the hedge fund Long Term Capital Management. In just seven weeks, the Dow tumbled 18.2%. 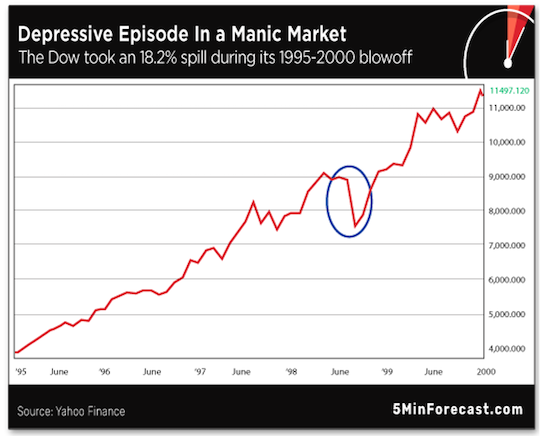 Again, panic selling would have been the wrong thing to do. But it’s completely understandable. The headlines at the time were scary, and our macro maven Jim Rickards says the reality was even scarier.

He was the top lawyer at that hedge fund, Long Term Capital Management; its collapse threatened to take down 14 major banks. Jim negotiated a rescue with the Federal Reserve that allowed LTCM to cover its losses and prevented financial contagion from spreading to those banks. (No taxpayers were harmed in this bailout.)

So when Jim looks around at the state of the world and the markets… and he says now’s the time to take that simple protective step we mentioned a few moments ago… you might want to pay heed.

In the meantime, go figure: The stock market is shrugging off news that “the economy” is weaker than previously thought.

This morning the Commerce Department delivered its first guess at gross domestic product for the third quarter. GDP is a profoundly flawed measure of economic health — you can see our most recent exploration of the reasons why here — but other people treat it with utmost seriousness. Thus, it’s a “market-moving” statistic, and we’d be remiss to ignore it.

The “expert consensus” among dozens of economists polled by Econoday expected an annualized increase of 2.7%. Whoops, it was only 2.0% — down dramatically from the previous quarter’s torrid 6.7% pace.

Evidently, shriveling stimmy payments from Washington put a hurt on consumer spending — which makes up 70% of the GDP calculation. Business investment also shrank, while the trade deficit grew.

But in the twisted logic of the 2021 stock market, the major indexes are rallying — perhaps on the theory that a sharply slowing economy will prompt the Federal Reserve to hold off on its “tapering” plans.

Random notes about pandemic, the lockdowns and the supply-chain snags…

“Dave, 👍👍 !” says a short note from a reader responding to the mailbag segment of yesterday’s 5.

Others felt more talkative. “When someone presumed intelligent writes you a missive leading with, ‘Putting the brakes on that kind of speech shouldn’t have to be a Biden agenda item as you stated. It should be an American agenda item’…

“How far we have fallen for anyone to think putting the brakes on any kind of speech should be an American agenda item. Not the America I learned of as a child, whose Constitution clearly protects the freedom of speech, with no qualification for whether or not you or anyone else like or agrees with that speech.

“Keep doing what you are doing. You guys are great and exposing a lot wrong with the system regardless of who/what party happens to be in power. They all use and abuse the same system.”

“Only thing I’ll say about a ‘valid, safe election’ is that I’m in the ‘Don’t vote, it only encourages the bastards’ crowd,” another writes.

“But calling the selfie-taking bunch that toured the Capitol and sat at Pelosi’s desk — Oh, the horror! — an insurrection is just as ridiculous as calling all the riots last year ‘mostly peaceful protests.’ The doublethink and newspeak are beginning to make my head hurt.

“I truly, truly pray to whatever force in heaven that might still have patience with this country that conservatives never reach the point of actually deciding to educate people what a REAL insurrection is. There are an estimated 400 million or so guns in this country. If Trump supporters had really wanted to take the Capitol, there is no standing army that could have stopped them. God help us all if it ever gets to that point.”

The 5: We devoted our entire 5 Mins. to the riot the day after it happened.

Feels as if most of what we wrote has held up reasonably well in the intervening months — especially the part about economic anxiety underlying the protesters’ grievances. By one account that emerged in April, nearly 60% of people facing charges for the riot have some history of money trouble — foreclosure, bad debts, back taxes.

Anyway, the issues raised by the censorious reader yesterday aren’t going away. This morning’s Wall Street Journal published a letter to the editor from Donald Trump… and there are blue checks on Twitter averring that perhaps “freedom of the press needs some amending,” in the words of an MSNBC “legal analyst.”

“So many people would rather be offended than learn something these days,” says a reader who gets the last word.

“I’d like to give you all a virtual hug, or three cheers or a pat on the back for putting together The 5 every day. Seems like a lot of (thankless?) work. Thank you!”

The 5: It’s a balm when we get feedback like yours. Without it, yes, our attempts to put the relentless pace of financial headlines into instant context would be a lot more grueling…