Maximum Security for Your Crypto

This might be the most bullish development in cryptocurrency we’ve seen in — well, at least a week… 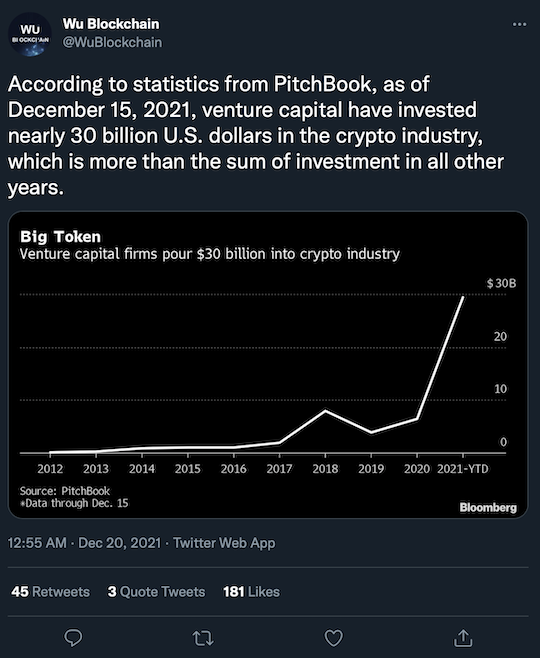 At first blush, it’s tempting to think, That’s a bubble. More likely, given that we’re only 13 years beyond the original Bitcoin white paper, is that crypto has finally reached critical mass for the venture capital crowd.

They’re seeing a future of DeFi, or decentralized finance — banking without banks, stock trading without brokers or exchanges, insurance without insurance companies. And they don’t want to be left behind.

“For a person, like me, who has a bad habit of forgetting passwords, how would it make sense to get into cryptos, since they involve a unique string of 150-plus characters and digits that you must never lose?

“If you lose this code, you lose all your money… right? Or was I misinformed? And if this IS true, how many doofuses, er, people have lost their money this way?”

“This is the trade-off of self-custody… of ‘being your own bank,’” says Chris Campbell — senior analyst for our resident crypto evangelist James Altucher.

Stories abound about people who’ve forfeited substantial fortunes this way — i.e., a guy from San Francisco who misplaced his seed phrase in 2011. His 7,002 Bitcoin is worth $342 million at today’s prices — or would be if he could access it.

So a few nuts and bolts about seed phrases: “A seed phrase is a 12–24-word random sequence of words that can restore your wallet,” Chris explains.

“Your seed phrase is your master key. Keep it safe and you can unlock your wallet anywhere in the world, from hundreds of different crypto wallets.”

Here’s the thing: For maximum security with this most digital of assets, it’s best to go full analog… 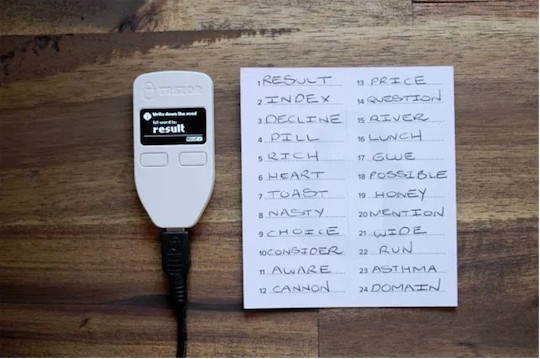 “Don’t keep your seed phrase online, in the cloud or on your computer,” says Chris. “Don’t take a picture of it, unless it’s a Polaroid. (Hackers can find it.) Don’t print it out. (Printers hold a history.)

“Don’t share your seed phrase with ‘customer support staff.’ (This is a common scam. No legit company will EVER ask.) Don’t give your private key to anyone promising to send you crypto. (Common scam.) Don’t use a pre-generated seed phrase. (Another common scam.)

“Only use a seed phrase you generated yourself.”

To generate a super-safe seed phrase on your own, you buy a hardware wallet — like the one pictured next to that scrap of paper above. “Hardware wallets are physical devices that keep your seed phrase (and private keys) offline,” Chris explains.

“They are also known as ‘cold storage’ (as opposed to ‘hot,’ or connected to the internet). When you use a hardware wallet, your seed phrase is generated offline. We recommend Trezor, Ledger and SafePal. NEVER buy these hardware wallets from a third party. Always buy direct from the companies. When you set up the wallet, per the instructions, as mentioned, you’ll generate your seed phrase.”

Write down your seed phrase on more than one scrap of paper — and stash them in places where you’ll know you find them but no one else can.

Chris’ bottom line: You don’t have to be “that guy”… as long as you take a few preventive steps. “Even a doofus can keep crypto safe.”

[Ed. note: Maybe we’ve raised even more questions than we’ve answered here. Luckily for you, only days ago Chris and James Altucher wrapped up an epic collaboration — a crypto opus titled The Big Book of Crypto.

Here’s the link where you can learn more and get your copy. Don’t get the wrong idea: This is not a pitch for James’ expensive high-end crypto advisory. (If you’re a crypto newbie, you’re not ready for that — not yet, anyway.) Seriously, check it out for yourself.]

For the first time in several days, the stock market looks relatively calm.

After Friday’s and Monday’s freakout over the prospect of new restrictions prompted by the Omigod variant… and then an “exhaustion rally” yesterday… the major U.S. stock indexes are up about a quarter-percent as we write today. That puts the S&P 500 at 4,662 — barely 1% off its record close on Dec. 10.

Still, as we’ve suggested for a few days now, there’s weakness beneath the surface. And the mainstream is starting to catch up: This morning’s Wall Street Journal highlights research from Goldman Sachs that finds while the S&P 500 is up 24% year to date, only five companies account for a third of that gain — Apple, Microsoft, Alphabet, Tesla and Nvidia.

The president did not announce any new restrictions in his big COVID speech yesterday. But that doesn’t mean they’re not coming… 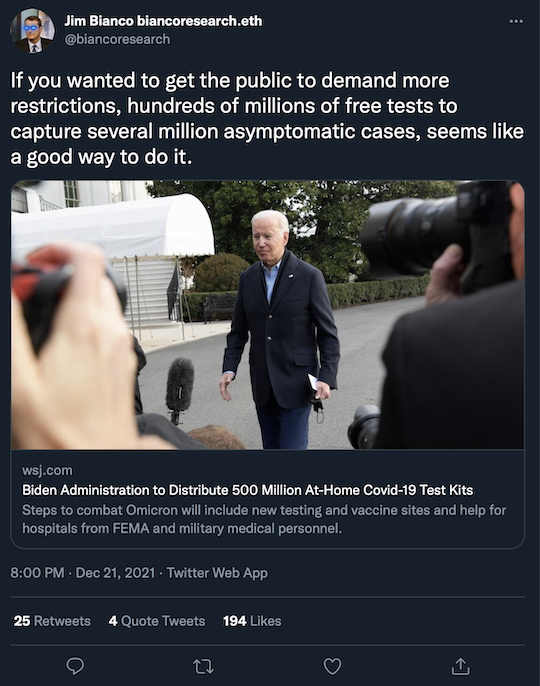 As it is, vaccine passports are coming to still more big blue cities — Chicago and Boston. Which reminds us of a flow chart we saw first thing this morning… 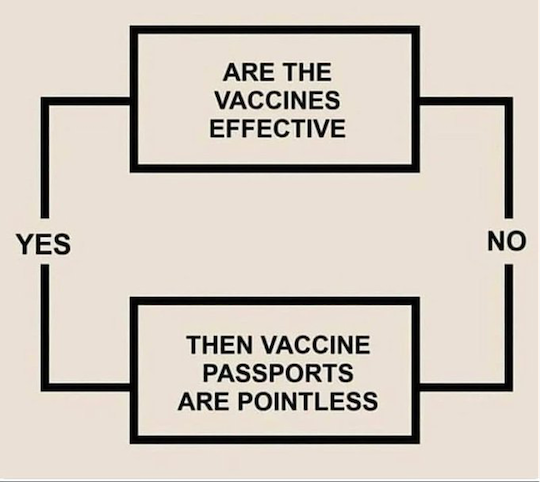 But we’re still a ways away from Tier 6, the purple states. Here in your editor’s home base of Michigan, Gov. Gretchen “Queen of Hearts” Whitmer gave a big COVID speech yesterday… but she announced no new restrictions. (For all intents and purposes, there’s been no statewide mask mandate since May.) Michigan is not Oregon or New York… and Whitmer presumably wants to be reelected next year.

Straw in the wind — what might be “the first ruling allowing a worker’s lawsuit against an employer over a family member’s COVID death,” says the Reuters newswire.

For all the chatter in recent decades about America being a litigious society, the volume of COVID lawsuits against businesses has been strikingly tiny thus far.

But now a state appeals court in California has cleared the way for a potentially landmark case to proceed — a lawsuit filed by an employee of a candymaker who says she caught the virus at work and passed it to her husband, who died.

See’s Candies — a subsidiary of Warren Buffett’s Berkshire Hathaway — tried to argue that it was a workers’ comp case, which would have precluded a lawsuit. But the court wasn’t buying it.

Too soon to say if it’s a harbinger of many more similar cases. But we’d be remiss to overlook it.

Your government in action: The Secret Service has disclosed that criminals have stolen nearly $100 billion in pandemic relief funds.

In other words, the system was so sloppy that $1 out of every $35 in handouts fell into the hands of thieves and fraudsters.

Top targets: The Paycheck Protection Program, the Economic Injury Disaster Loan program and a program distributing unemployment assistance. So far, the feds have recovered about $2.3 billion that was channeled via outfits like PayPal and Green Dot.

The Secret Service has named a new “pandemic fraud recovery coordinator” to try to claw back more of the money. Roy Dotson is his name.

“There’s no doubt that the programs were easily accessible online. And so, with that, comes the opportunity for bad actors to get into that mix,” he tells CNBC. “It was necessary to try to get these funds out to people that were truly hurting, and no fault of anybody.”

The supply-chain snags are getting serious when McDonald’s has to ration french fries in Japan. Starting Friday and continuing for a week, only a small order of fries will be available.

“McDonald’s Japan will temporarily limit sales of Medium- and Large-sized French Fries as a proactive measure to ensure customers can continue to enjoy McDonald’s French Fries,” says a company statement.

In addition to the usual supply-chain issues, shipments of potatoes from North America are stymied by some nasty floods in British Columbia a few weeks ago — which have scrambled operations at a port near Vancouver.

Limited supplies are still coming in thanks in part to air-cargo shipments — which reminds us of another intriguing item we saw this morning: UPS has ordered 19 Boeing 767 air freighters to handle the growing demand for air cargo as a workaround for snarled shipping.

Delivery isn’t expected until the 2023–25 timeframe — which sounds as if UPS is prepared for shipping to be terminally fouled up, no?

“The thing about all this ‘vaccine’ BS that really makes my head hurt is all the dishonestly surrounding the subject,” a reader writes.

“As Monday’s issue pointed out, we still have officials implying that mass vaccination is necessary to stop this thing in its tracks. At this point I have to assume anyone in a position of authority who says this is knowingly lying. If I choose to get ‘vaccinated,’ I do so to protect my health, not yours. It will do squat to prevent the spread of the virus.

“Look at professional sports, which have nearly 100% vaccination rates, largely through intimidation and shame tactics. They are being decimated, but I don’t see our crack MSM wondering, ‘Gee, how did that happen?’ It might put a chink in the narrative.

“Everyone has an agenda, and the truth can be damned — including the fact that these are NOT vaccines, and no one can vouch for their long-term safety. But I guess that’s only a minor detail beyond the capacity of most people to understand.”

The 5: “Decimated” might be a strong word to describe major-league sports. The NHL is on hold, but presumably that’s because of renewed/tighter restrictions in Canadian cities.

The NFL, meanwhile, has come up with the intriguing approach of cutting back on the nonstop testing of vaccinated players — which almost surely will result in fewer positive asymptomatic “cases.” The league managed to get all its games in last season, pre-vax, and might very well pull it off again this season…

“If ‘Nutella cheesecake’ was not a farce, please send the recipe!” a reader implores after yesterday’s edition. “Love The 5.”

The 5: Your favorite search engine will turn up potentially dozens of iterations. Enjoy!

P.S. As we go to virtual press, Jim Rickards has begun his live Zoom call, titled “Countdown to Crisis” — including details on what he calls a silent war raging in the United States for 20 years, soon to go critical.

If you couldn’t make it, the replay will be available either later today or tomorrow. We’ll shoot you an email with the link within the next 24 hours. And we’ll definitely have it in tomorrow’s 5.