“The ability to trade any market, anytime, from anywhere has changed everything. And yes, they’ll soon bulldoze the shoulder-to-shoulder trading pits of the past as well.”

Today we’re wrapping up our team’s 2022 predictions with Alan — who we used to describe in these virtual pages as “our eyes and ears in the Chicago options trading pits.”

But as the electronic age kept progressing, there were fewer and fewer pits to speak of — and in the pandemic era, they’re all but gone.

Though not necessarily bulldozed…

Matter of fact, the place where Alan perfected his skills during a 30-year trading career is about to become a substation for ComEd — the big electric company in Chicago.

“The utility has purchased the building at 333 S. La Salle St., formerly the largest trading floor of the Chicago Board of Trade,” says the Chicago Sun-Times.

“The site has been little used for years because the old open-outcry pits — where brokers and speculators did business via hand signals — have been replaced by electronic markets.”

The building is a monument to the easy-money hubris that pervaded financial markets a generation ago — completed in 1997 at a stupendous cost of $182 million. 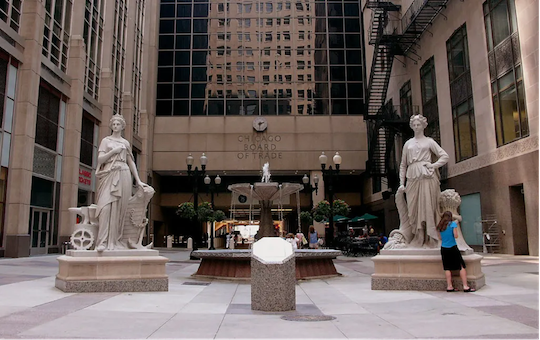 No bulldozer here: The electric company says it will leave the plaza outside as-is —
with statues representing industry and agriculture

“I watched it being built from the train station platform every day,” Alan tells me. At that time he was working at the old CBOT building nearby at 141 W. Jackson.

It was in the new building where Alan traded bond futures on the evening shift — a grind, yes, but one he took on willingly because that’s how he could hone his skills in the art of risk management. “Risk control was in its infancy then,” he says, “as stop losses were not offered overnight and the only way to monitor your positions was to call Japanese trading desks for prices.”

In between, the CBOT merged with the arch-rival Chicago Mercantile Exchange to form the colossus CME Group.

Bowing to the reality of electronic trading, CME Group shuttered most of the trading floors in 2015, a mere 18 years after the grand opening.

The pandemic killed off most of the rest — temporarily as of March 2020, but “temporary” then became “permanent” in the new normal of work-from-home.

The only contract still traded face-to-face is options on Eurodollars — dollar-denominated accounts in foreign banks and foreign branches of U.S. banks. (In the spring of last year, Alan was closely watching the Eurodollar trade, and correctly deduced for us that longer-term interest rates would begin a steady climb down — giving a lift to the major stock averages.)

Ironically, the Eurodollar pit will move back to the old CBOT building where Alan cut his trading teeth 30 years ago.

Bottom line: “Things have changed dramatically to democratize trading for all,” says Alan — “not just the old boys’ club that many fought so hard to get into, including myself.

“NOW is the best time in history to trade!”

For the last 2½ years it’s been my privilege to partner with Alan on The Profit Wire — a one-of-a-kind options trading service for everyday folks, taking advantage of that “democratization.”

We rely on a proprietary indicator that sniffs out insider activity in the complex trade for derivatives. Then Alan pores over the indicator’s data to pinpoint a simple options trade that retail investors can use to piggyback the insiders’ activity.

I’ve been looking over The Profit Wire’s 2021 scorecard this morning. The short story: We booked gains on 79% of our trades. Including the losers, the average trade generated a 19% gain over a hold time of 63 days. Those are real-world results obtained by people just like you.

The Profit Wire is currently closed to new subscribers. We’ll let you know when we open it back up — probably late winter or early spring.

The stock market is stumbling as the week winds down and earnings season gets off on the wrong foot.

Three of the Big Four commercial banks reported their numbers this morning: JPMorgan Chase delivered better-than-expected figures… but as we write, shares are down more than 5%. Ditto for Citi… which is down 2.5%. Bucking the trend is Wells Fargo, which delivered a big “beat” on revenue and is up 3.4%.

The big economic figure of the day is a shocker — retail sales shrinking 1.9% during December, in contrast with expectations for a flat number.

And the number is even worse if you throw out auto sales (notoriously volatile month to month) and gasoline sales (rising gas prices can skew the headline number higher). Here, the expectation was for a modest 0.2% jump and the actual number is a 2.5% slide.

Blame it on inflation, blame it on the virus or blame it on these factors: “Some of this may be lack of inventory or reluctance to buy big-ticket items that did not get discounted this year,” says a summary from Econoday, “but it also suggests that many consumers started shopping early and/or pared back on gift-giving.”

Not quite so shocking, but nonetheless disappointing, are the industrial production numbers.

U.S. industrial production fell 0.1% last month — violating expectations of a 0.3% increase. Drill down into manufacturing and the disappointment is even worse — a 0.3% drop versus expectations for a 0.5% jump. Utility output was also soft, but mining and energy production moved up.

Thus the “cap ute” rate fell slightly; 76.5% of U.S. industrial capacity was in use during December. 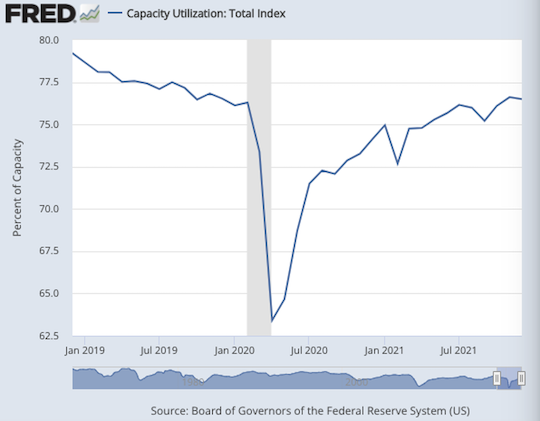 At least when it comes to this important metric, America’s still stuck below pre-pandemic levels.

The court struck down the vaccine-or-test mandate for private firms with 100 or more employees. The 6-3 majority said what we said from the beginning: The mandate is executive-branch overreach — far beyond the powers Congress envisioned when it passed the legislation creating OSHA in 1970. Instead, the executive branch was using OSHA to impose “broad public health measures” that are “untethered, in any causal sense, from the workplace.”

End of story? Hardly, depending on who you listen to… 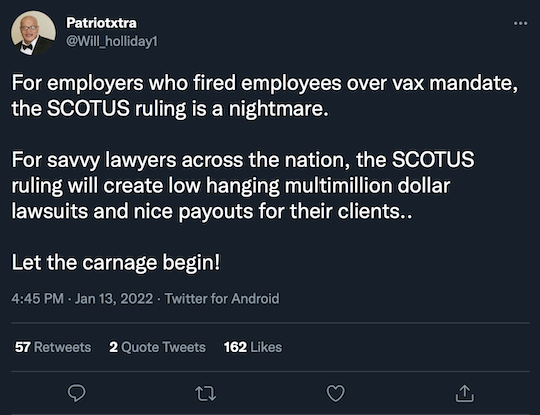 Meanwhile, a 5-4 majority upheld the vaccine-no-testing mandate for health care providers that take Medicare/Medicaid money. The logic amounts to: “You take the gummint’s money, you dance to the gummint’s tune.”

Which is always the danger, right?

Only problem is now there’s no end in sight to the spectacle that’s emerged in recent days — vaxxed-but-tested-positive health care workers brought in to cover shifts previously held by unvaxxed-but-tested-negative workers who’ve quit or been fired.

Talks over the Ukraine standoff have reached a “dead end” per Russian diplomats — coincidentally at a moment the dollar seems to have peaked.

If you’ve been busy or out of pocket and missed The 5 Wednesday and yesterday, it’s worth your while to catch up. Today, suffice to say matters are getting worse.

As we write, elite media are abuzz with anonymous Biden administration claims that Moscow is planning “a false-flag operation” in eastern Ukraine, creating the pretext for a Russian invasion. The stories are bylined by all the worst media warmongers — including David Sanger in The New York Times and Natasha Bertrand at CNN.

Yesterday, we spelled out how a Russian invasion could mark the beginning of the end for the dollar’s role as the globe’s reserve currency.

Coincidentally or not, the U.S. dollar index — which measures the greenback against six other developed-world currencies — took a huge spill the last couple days, as you see in this six-month candlestick chart from StockCharts.

Can’t blame it on the U.S. inflation numbers this week, either — sky-high, yes, but as expected.

Too, there’s a Bloomberg article: “A growing chorus of investors is betting the world’s reserve currency has reached a peak in a dramatic turnaround from a month ago when positioning in the greenback was the most bullish since 2015.

No, Ukraine doesn’t factor into these investors’ calculus. Too soon for that. The train hasn’t exactly left the station… but the conductor is blowing the whistle more insistently.

Ukraine, meanwhile, pops up in our mailbag — which we haven’t checked for a couple of days now…

“Your clear-eyed analysis of the NATO-Russia discussions is spot-on, particularly the historical context,” a reader writes.

“Russians have a historical memory of their borders being repeatedly assaulted by enemies abroad – Charles XII of Sweden, the Poles, Napoleon and Hitler. They lost 20 million (!) of their people fending off the last of these villains – that’s 70 times the number of humans the U.S. lost in WW2.

“Further, the post-WW2 West is seen as an alliance of serial liars and hypocrites by nationalist Russians. We first told them we would not expand NATO and promptly broke that promise. We dismembered one of their allies (Serbia), gratuitously went to war against Saddam Hussein in 2003 on false pretenses, recklessly blew up Syria by encouraging protests against Assad and then proceeded to utterly destroy Libya when it posed no threat to either the U.S. or Western Europe (NATO).

“From their perspective, the single-greatest threat to global stability and peace is the U.S. and NATO.

“There is more than a grain of truth in that assertion, painful as it may be to admit it for many of us who are steeped in mythology about the U.S. being international do-gooders, that in turn necessitates a bloated weapons budget.

“I’ve been a reader of The 5 since you started. Keep it up!”

“When I began to read yesterday’s episode it almost immediately invoked memories of the holiday classic A Christmas Story from 1983,” writes another.

“As you might recall the character in that movie that created daily havoc in the neighborhood was Scut Farkus — different spelling but similar pronunciation and no known relationship to Evelyn Farkas — whose quote kicked off your daily missive.

“However, I can see parallels between the movie, the events that preceded it by several years and the more current events occurring in Ukraine.

“The movie centered on the nearly obsessive preoccupation of Ralphie Parker to convince his parents to grant his one great Christmas wish, a Red Ryder BB gun. Ralphie was undeterred by all of the noise of the day and the constant threat of Scut Farkus and his toady, Grover Dill. Eventually we learn that Ralphie did indeed get his prized BB gun and the story ended happily.

“You might also remember that Scut Farkus ended up with a bloodied nose when a distraught and disappointed Ralphie Parker took him on in the alley and surprised him with a flurry of punches to the face.

“Let’s hope today’s political leaders can resolve their differences without resorting to a rumble in the alley. At worst, let them all get their tongues stuck to the frozen flagpole and we can hope that a BB gun is the most destructive they might become.”

The 5: Your stream of consciousness might be even weirder than my own. But thanks for the humorous diversion — which we could all sorely use going into the weekend!